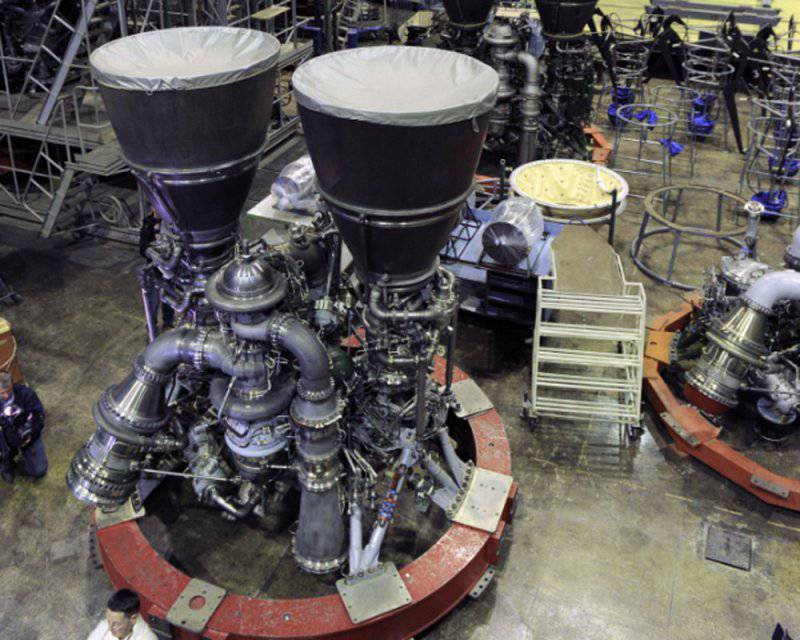 A few days ago it became known that the Samara TsSKB Progress proposed a new engine for promising super heavy-class launch vehicles using liquefied natural gas as fuel. According to the latest reports of the national press, Khimki NPO Energomash announced their ideas about the future of rocket engines. Academician V.P. Glushko. To improve the performance of advanced engines are encouraged to equip the combustion chamber, working on new principles.

The Vzglyad publication, citing representatives of NPO Energomash, writes that the company has already developed a combustion chamber of the original design. The engine equipped with it will be able to significantly improve its performance - the expected increase in power reaches 10% in comparison with the engines currently used. The new design of the combustion chamber makes it possible to use the principle of engine operation that has not yet been mastered in practice, namely the so-called. detonation burning fuel. The ideas underlying the new project were formulated by Academician Ya.B. Zeldovich several decades ago, but still has not reached the practical application in the rocket and space industry.

“Vzglyad” cites the words of the general designer of NPO “Energomash” on science P. Levochkin, according to which the groundwork for the late thirties of the last century became the basis for the new project. The specialist noted that to this level the limit of the capabilities of the liquid rocket engines built according to traditional schemes has been reached. Working through various ways to further improve engine performance, the specialists of NPO Energomash began to study the chemical processes that accompany the work of the power plant. In the course of these studies, the designers turned to the works of Ya.B. Zeldovich, which offered interesting methods to improve engine performance, primarily detonation combustion.

The essence of detonation burning is as follows: during burning, a shock wave propagates through the substance-fuel, initiating the burning of new sections of the substance. The energy released during combustion, in turn, supports the shock wave. The study of detonation burning involved many scientists. At the end of the thirties, Ya.B., who worked independently of each other. Zeldovich (USSR), J. Von Neumann (USA) and V. Dering (Germany) almost simultaneously developed the same model of the phenomenon, later called ZND by their names. It is proposed to rely on these works in the new project.

As P. Levochkin told, the promising rocket engine will use the so-called. spin detonation. This means that in one of the sections of the combustion chamber during its operation there will be a shock wave rotating in a circle at a speed of up to 8 thousand revolutions per second. By design, a combustion chamber adapted for this kind of work will hardly differ from existing systems. However, in its design it is necessary to take into account the increased loads arising from the detonation of fuel.

The use of detonation combustion of fuel will not only improve the performance of the engine, but also slightly reduce the size of the combustion chamber. Increasing engine power by about 10% will have several positive effects at once. For example, it will be possible to reduce the fuel supply or increase the payload of the launch vehicle. As a result, the flexibility of the missile can be noticeably increased.

The timing of the appearance of the first launch vehicles with engines using the phenomenon of detonation combustion of fuel is not yet known. According to recent reports, a combustion chamber for a promising power plant has already been created. Apparently, in the foreseeable future, construction of prototype engines will begin, which will later be used in tests. Operation of the new engines is likely to begin in the distant future - not earlier than the first half of the twenties, but it is too early to speak about exact terms.

Prospects for the new engine is also not completely clear. The proposed technologies can significantly improve the characteristics of the engines, but the use of new engines on the launch vehicles is not a question. Which rockets will be equipped with promising engines developed by NPO Energomash has not yet been determined.

After the appearance of serial rocket engines based on the new technology of NPO Energomash named after Academician V.P. Glushko will reaffirm his status as one of the world's leading enterprises in the industry. One of the most well-known enterprise developments is the RD-170 engines and the RD-180 developed on its basis. RD-180 in recent months has been the subject of controversy and even court sessions.