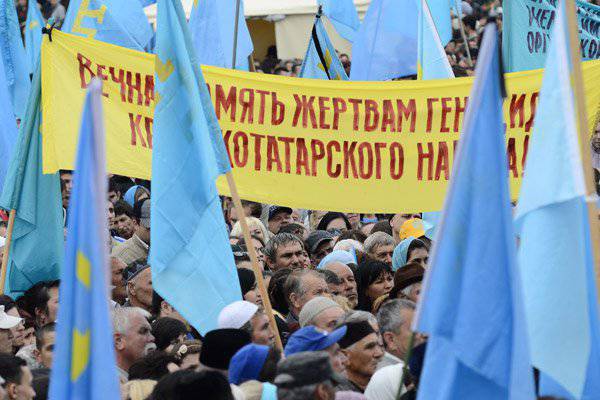 In Simferopol, laid flowers at the monuments to those who died during the resettlement. Then the rally and prayer were held in the village of Akmechet. The mourning event was attended by several thousand people. The authorities took increased security measures, but the meetings were calm and without provocation. The participants in the mourning rally adopted a resolution, which was read out by a member of the Majlis, Dilyaver Akiev. Once again, the Tatars called their goals, the main one being the establishment of Crimean-Tatar national-territorial autonomy in Crimea. The text of the declaration states that, taking into account the legal acts of international law, in particular the UN Declaration on the Rights of Indigenous Peoples, the Crimean Tatar people express their desire for self-determination by creating autonomy. This should be facilitated by the return of historical names to settlements and other geographical objects of the Crimean peninsula, which were changed during the eviction. Also, representatives of the Crimean Tatars require the development of regulations that will allow you to create a permanent representation of the Crimean Tatars in the executive and legislative authorities of the Republic of Crimea. In fact, the Crimean Tatars want to introduce national quotas.

Moscow has already made a number of serious concessions. 18 March, Russian President Vladimir Putin drew attention to the need for political and legislative decisions that restore the rights of the Crimean Tatars and their good name. April 21 adopted a law on the rehabilitation of the peoples deported from Crimea by state support for their revival and development. The law includes assistance in the establishment and development of national-cultural autonomies, and other public associations and organizations of the Crimean Tatars, Bulgarians, Greeks and Germans. On May 16, on the eve of the 70 anniversary of the deportation of the Crimean Tatars, Russian President Vladimir Putin discussed with the representatives of the Crimean Tatars communities specific solutions to their problems. At this meeting, Ayder Mustafayev proposed to legally recognize the Crimean Tatars as the indigenous people of the Crimean peninsula. Putin promised to think about this issue. At the same time, he noted that “in solving this problem, it is impossible to generate another one”. In particular, the same Greeks lived on the Crimean peninsula before the Tatars and also have the right to do so.

Earlier on the same day, President Vladimir Putin rightly noted that the Crimean Tatars should not become a bargaining chip in the disputes between Russia and Ukraine. According to him, both federal, and regional, and local authorities are ready to work with all people who sincerely strive to work to improve life in the Crimea. Everybody needs to “work smoothly with a positive attitude.” In the big work there can be difficulties, contradictions and disputes, this is a natural matter. Putin stressed that "the interests of the Crimean Tatars today are connected with Russia."

As a result, in the life of the Crimean Tatars in a fairly short period of time there were significant positive changes that are completely connected with a clear state policy of the Russian Federation. In this situation, the mass of ordinary Crimean Tatars, who have no relation to the political turmoil of their national intelligentsia, such as such a figure as the former head of the Majlis Mustafa Dzhemilev, who conducted the pro-Turkish and pro-Western course, must be extremely cautious. You can not let yourself be drawn into political games that have anti-Russian overtones. As Vladimir Putin rightly pointed out, the Crimean Tatars should not be a “bargaining chip” in the Great Game against Russia and should concentrate on working to improve life in the Crimea.

Crimean leaders who promote the idea of ​​recognizing the Crimean Tatars as an “indigenous people”, introducing national quotas, legalizing representative bodies and creating national-territorial autonomy for the Crimean Tatars, follow the path of the Bolshevik internationalists (Trotskyists), who did a great job of dismembering Great Russia into “ national destinies ". It was the creation of national republics and autonomies that became one of the prerequisites for the future collapse of the USSR. Preservation and development of this system in the Russian Federation maintains the danger of such a scenario at the present time.

The most reasonable approach on the part of the Crimean Tatars is a complete rejection of claims against Russia and the Russian people. And the rejection of claims to some "feature" of their status, autonomy as an "indigenous people." All actions of representatives of the Crimean Tatars, who have a certain anti-Russian subtext, especially in the context of the global crisis and the intensification of the confrontation between Russia and the West, are not only harmful, but also dangerous. Crimean Tatars need to live peacefully, raise children, not to think about historical grievances, imaginary and real. So, the same Russians live in peace and do not stutter about the need for their rehabilitation or compensation for damage, although in almost all historical periods they bore the brunt of all the problems and suffered incalculable losses and casualties.

The Majlis, which constantly stirs the topic of historical grievances and demands a special status for the Crimean Tatars, is generally time for the law enforcement agencies. This organization was originally anti-Russian and carries a charge of destruction. This organization is not conducive to the establishment of international peace in the Crimea. We must not forget that for a long time the Ukrainian special services (and through them the American) used the Crimean Tatar issue as a counterweight to pro-Russian sentiments on the Crimean peninsula. The Security Service of Ukraine conducted systematic work with the leaders of the Crimean Tatars under Yushchenko and Yanukovych. In addition, the same Dzhemilev had contacts in Turkey and Azerbaijan. The historical problem was used by Kiev and the forces behind it in their own interests. Crimean Tatars again want to turn into "cannon fodder" in the fight against Russia.

Indeed, in this case, one will have to recall unsightly pages from the history of the Crimean Tatars. So, it is worth recalling that the claims of the Crimean Tatar people on the status of the “indigenous people” of Crimea are stupid or deliberate lies. The same Greeks and Slavs have much more rights to the status of the indigenous inhabitants of the Crimean peninsula. It is enough to recall that the Slavic element was in the Crimea during the time of the Azov-Black Sea Russia (Secrets of Russian history: Azov-Black Sea Russia and Varangian Russia) and the rule of the first princes of the Rurik dynasty. In the 8th century, Russians (Slavs) lived in Crimea; on the peninsula, archaeologists discovered many objects of Slavic-Russian origin. Slavic found in Korsun and southeastern part of the Crimean peninsula weapon, dishes, religious objects with inscriptions in Russian, and various household items. The famous Greek (Byzantine) historian Leo Deacon, who left for us a valuable description of Svyatoslav Igorevich's campaigns to Bulgaria and the wars of the Rus and the Romans (although extremely politicized, humiliating the Rus), and the description of the greatest Russian warrior, stubbornly calls the Rus “Tavroskifs”, that is Crimean Scythians. The Crimea during the existence of the Old Russian state was a “Russian outskirts” - part of the Tmutarakan land.

The Crimean Tatars appeared in the Crimea only in the XIII-XIV centuries, moreover, as invaders who subjugated the indigenous people of the peninsula. And their origin of the issue is quite controversial and dark. Apparently, this is not a single people with several foundations. In the XV-XVIII centuries, in Crimea, a robber-parasitic Crimean Khanate was established, ruled by the Gireev dynasty (Robotic parasitic Crimean Khanate and the fight against it). For several centuries Russia-Russia has been fighting with him. Millions of Slavs became victims of the Crimean Khanate. After a long and bloody struggle, Russia was able to win up. In 1873, the Crimea became part of the Russian Empire.

And if we recall the regular moans of representatives of the Crimean Tatars about the "genocide" of their ancestors from the "bloody Stalin", it is worth recalling that the deportation of the Crimean Tatars in 1944 was caused by their mass collaboration with the Nazis. In many ways, the deportation was just retribution for the treachery of the USSR. This can be read in the work of the historian Igor Pykhalov, "For what Stalin evicted the nations." Therefore, representatives of the Crimean Tatar people should not focus on "historical justice." This may go sideways. The people should focus on a peaceful life.