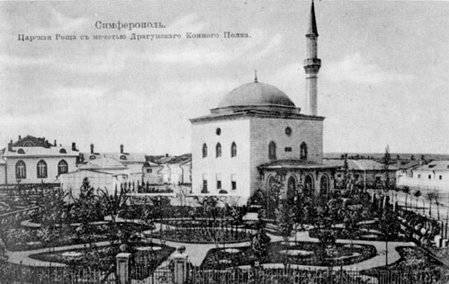 After the betrayal of Russia during the Eastern (Crimean) War, the Crimean Tatars calmed down for a while. In addition, a wave of resettlement to Turkey and the active settlement of the Crimea by Russians and other peoples followed. However, despite this, the Crimean Tatars continued to wait for an opportunity to plunge a knife into the back of Russia. The following such incident was introduced after the 1917 revolution of the year.

Already 25 March (7 April) 1917, the general meeting of Muslims of Crimea opened in Simferopol, which established the Provisional Muslim (Crimean-Tatar) executive committee (Municipal Executive Committee). Chelebidzhan Chelebiev, who was simultaneously the supreme mufti, was elected its chairman. The leaders of the Moscow Executive Committee in the summer of 1917 created the “National Party”.

Crimean Tatar nationalists immediately raised the issue of the formation of the Crimean Tatar military units. This idea was supported by the commander of the Crimean Equestrian Regiment, Colonel A. P. Revshin. The Russian colonel, defending the idea of ​​forming the Crimean infantry units, put forward the same ideas that are now being repeated by supporters of the creation in the Russian Federation of “national territorial units”. Revshin spoke about providing Muslims with the opportunity to serve together, abide by their rules of religion, about the homogeneity of the units of nationality and religion, cohesion "because of the belonging of individual soldiers to the same villages, cities and counties."

In June, representatives of the Moscow Executive Committee arrived in Petrograd. However, their question was not resolved, but not because of a conscious unwillingness to support the Crimean Tatar movement, but because of the disorder that prevailed in the highest echelons of power at that time. The head of the Provisional Government, Prince Lvov, after a long idle chatter declared that the issue was not within his competence and sent a delegation to Kerensky, and that was not in the capital. Crimean Tatars decided to take matters into their own hands. June 18 The Muslim Military Committee decided to separate the Crimean Tatars into a separate part. The Provisional Government did not hinder this. The Crimean Tatars, sensing the rapid weakening of the central government, decided to create a national army, to be able to fulfill their political desires.

It is clear that the Crimean Tatars were not going to fight at the front and “defend their homeland from enemies,” as it was said in the Political Program of Tatar Democracy adopted on 22 June. Crimean nationalists were not going to the front line. When at the beginning of July 1917, the commander of the Odessa Military District, General M. I. Ebelov ordered all Crimean Tatars from the reserve regiments stationed in Simferopol (10 officers and 1300 soldiers), joined the 32 reserve regiment, which was sent to the Romanian front, the Crimean Tatars refused to carry out the order. Incited by the supreme mufti, they decided to stay in the rear and went home.

Sevastopol counterintelligence attempted to stop the activities of the Crimean Tatar nationalists. Mufti Chelebiev and the commander of the 1 of the Crimean Tatar battalion, Ensign Shabarov were arrested on suspicion of spying for the Ottoman Empire. However, the case has not been developed. Under pressure from the liberal and nationalist public, the suspects were released several days later. The statehood of Russia during this period was falling apart literally before our eyes. In the muddy waters of turmoil, various agents of the opponents of Russia, national separatists, received almost complete freedom.

At this time, the Crimean Tatar nationalists stepped up their activities to seize power on the peninsula. October 31 (November 13) the first meeting of the Crimean revolutionary headquarters was held. He was headed by one of the leaders of the Executive Committee, Dzhafet Seydamet (lawyer by training). His assistant and the actual commander in chief was Colonel A. G. Makukhin. This post was offered to Major General P. N. Wrangel, but he had the sense to refuse such an "honor." At the direction of the Secretary General of the Central Rada for Military Affairs, S. V. Petliura, in early November 1917, hundreds of Crimean Mounted Regiments began to arrive in Simferopol, and then a reserve regiment of the Muslim corps. Crimean Tatar nationalists got military units at their disposal.

20-23 November in Simferopol passed the congress of zemstvos and city councils, which created a "temporary supreme body of provincial authority" - the Council of People’s Representatives. The congress, to the disappointment of the Crimean Tatars and Ukrainian nationalists, spoke in favor of preserving the Crimea as part of Russia. The Crimean Tatars responded that the Kurultai (the National Constituent Assembly of the Crimean Tatar people) opened on November 26 in Bakhchisarai on November 1917, in which the majority of delegates spoke in favor of the independence of Crimea. Kurultay worked until December 13 and adopted the “Crimean Tatar Basic Laws”, established the “Crimean Tatar National Government” (directory). Headed the "government" Chelebiev. Seydamet became Minister (Director) for Foreign and Military Affairs.

To fight the Soviet government in Crimea, an alliance of Crimean Tatar, Ukrainian nationalists and White Guards was formed. 19 December 1917, the Crimean Revolutionary Headquarters was transformed into the Headquarters of the Crimean Forces. He led the intensive work on the formation of military units of volunteers. Moreover, the public was the most diverse - from monarchists and Cadets to Social Revolutionaries, Mensheviks and nationalists. The basis of the "Crimean Army" consisted of parts of the former Muslim corps: the 1 and 2 of the Crimean Tatar regiments.

However, the Bolsheviks did not sit idly by either. On December 16, the Military Revolutionary Committee was established in Sevastopol, which took power into its own hands. VRKs were created in other cities as well. On January 4, 1918, the Bolsheviks took power in Feodosia, knocking out the Crimean Tatar formations from there, and on January 6 - in Kerch. On the night of January 8-9, the Red Guard entered Yalta. The Crimean Tatar troops, together with the white officers who joined them, put up stubborn resistance. The city passed from hand to hand several times. The Reds were supported by naval artillery. Only by January 16 did the Bolsheviks gain the upper hand. In this struggle, the Bolsheviks acted as a force that tried to keep Russia in historical borders.

The decisive battle took place in Sevastopol. On the night of 10 on 11 in January, the Crimean Tatar units attempted to seize the serf district. However, they met a strong resistance from the Red Guards. After receiving reinforcements, the Red Guard launched a counter-offensive. January 12 Crimean Tatars were defeated. Sevastopol detachment stormed Bakhchisarai.

At that time, a meeting of the Council of People’s Representatives was taking place in Simferopol. For the most part, the intelligent, party public led endless disputes, decided whether to provide armed resistance to the sailors of Sevastopol. Representatives of Kurultay boastfully stated that the Crimean Tatar troops had been sent to Bakhchisarai and would soon take Sevastopol, “they would easily cope with the Bolshevik gangs who were deprived of any discipline.”

However, the reality mercilessly broke all the rainbow dreams. The Crimean-Tatar formations could not withstand the battle with the sailors of Sevastopol and cowardly fled. The red detachments, without meeting much resistance, began an operation to capture Simferopol. On the night of 13 on 14, January, Simferopol was taken. Chelebiev was arrested and shot. Seidamet was able to escape to Turkey. Colonel Makuhin hid for some time. But then one of the local Crimean Tatars passed it for a small cash reward. The “military leader” of the Crimean Tatars was arrested and shot.

7-10 March 1918 was held in Simferopol in 1-th Founding Congress of Soviets, land and revolutionary committees of the Tauride province, which proclaimed the creation of the Soviet Socialist Republic of Taurida. Thus, the first attempt of the Crimean nationalists to take power in the Crimea failed miserably. The Bolsheviks suppressed the separatists and restored the territorial integrity of Russia. However, the distemper is just still flared up.

German invasion and liquidation of Soviet power. Rise of the 1918 of the Year

18 April 1918, violating the conditions of the Brest Peace, German troops entered the peninsula. Together with them, their Ukrainian servants, the Crimean group of troops under the command of Lieutenant Colonel PF Bolbochan, attacked. 22 April Germans and Ukrainian nationalists occupied Yevpatoria and Simferopol.

It must be said that the uprising of the Crimean Tatars largely began not because of military necessity - the Germans themselves would easily have occupied the peninsula, but because of the desire to plunder and take revenge on the “enslavers”. In addition, the German command supported this uprising because of propaganda interests: it was necessary to show the public that the Tatar population itself was active and freed itself from the “Bolshevik (Russian) yoke” on its own. The uprising was to lead to the establishment of the Tatar national government and state, which would be included in the sphere of influence of the German Empire.

The uprising was accompanied by massacres and atrocities against the Bolsheviks and the Christian population. In Sudak, the Crimean separatists seized and brutally murdered the chairman of the local revolutionary committee Suvorov. On April 21, members of the leadership of the Republic of Tavrid headed by the chairman of the SNK Slutsky and the chairman of the Provincial Committee of the RCP (b) Tarvatsky caught up in Novorossiysk. They were tortured for two days, then shot. Ethnic cleansing occurred in a number of villages: Crimean Tatars tortured and killed dozens of ordinary locals from Russians, Greeks and other Christians. The izuvers had some kind of maniacal need to dismember the Christians they caught — cut off the ears, fingers, women's breasts, etc. The massacre was stopped only as a result of the Red Guard counterattack.

As already noted, the fighting strength of the Crimean Tatar units was low. Despite the difficult situation, the Bolsheviks tried to repel the nationalist gangs. In Feodosia, the Red Guards and sailors, with the support of the destroyers Fidonisi, Zvonkoi and Shrill, easily suppressed the revolt of the nationalists. Then the Theodosia Revolutionary Committee sent two detachments to Sudak. Crimean Tatars persuaded to fold weapon without a fight. Those responsible for the murder of Suvorov were punished.

22 April in Yalta from Sevastopol ship arrived with the Red Guards. Sevastopol, together with the local Red Guards, spoke out to meet the enemy. 23 April in 12 versts from Yalta the red squads easily dispersed the Crimean Tatar nationalists. The separatists, who happily slaughtered the civilian population, fled in panic, faced with a tough rebuff. 24 April red destroyer fired on Alushta, the Tatars again did not accept the battle and fled. The destroyer brought weapons. Everybody took up the rifles, including the wounded from the hospitals, all the workers of the city and surrounding area. The atrocities of the Crimean Tatars left no one indifferent. The Red Guards were driving the Crimean Tatar gangs to Simferopol.

However, the Red Guards had to withdraw. They received a retreat order. Sevastopol troops were defeated by the Germans. By 1 May 1918, the German troops occupied the entire Crimean peninsula. Soviet power in the Crimea destroyed.