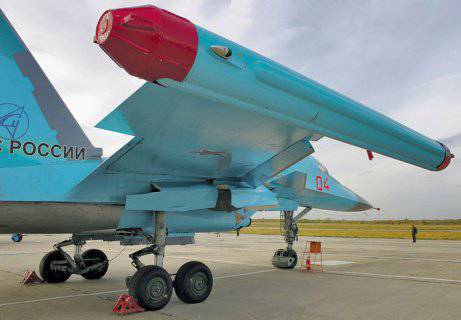 The NVO correspondent visited a regime enterprise whose products caused a flurry of discussions in the media and social networks in connection with the overflight of the American destroyer Donald Cook in the Black Sea with the Russian Su-24 aircraft. Leaving aside the journalistic fantasies about 27 American sailors who have experienced stress from the fact that the Russian bomber was able to suppress the American system weaponsincluding the vaunted ship multifunctional combat information and control system "Aegis". At the plant in Stavropol, where they produce electronic warfare (EW), no one has confirmed or refuted information that the company's products were involved in the incident. But at the same time all the factory workers had the look of birthday men.

I was taken to an anechoic chamber, where at that time measurements of electronic equipment were carried out for electromagnetic compatibility, and they offered to take a look at the screen of my cell phone. The phone did not find the signal from the station. “Now you understand what the American sailors saw on their radar screens,” one of the company's employees said with a mysterious air. So legends are born. After all, an anechoic chamber is just needed in order to protect equipment from external sources of electromagnetic radiation during its setup.

The special regime of secrecy established at the plant did not allow to go deep into the technical details of the device and the functional purpose of the electronic warfare equipment (EW). But even what we managed to see is impressive. In particular, equipment is being created here for the latest L-175V Khibiny-U complex, which was adopted by the Decree of the President of the Russian Federation of March 18, 2014. For the sake of historical It’s necessary to clarify that the complex is intended for Su-34 fighter-bombers, therefore it couldn’t be in the Su-24 electronic weapons, which flew about a kilometer from Donald Cook. However, the first sample of the Khibiny L-175V product was placed on a plane and tested in the air in January 1995, so who knows if the already obsolete model frightened American sailors.

In the museum of the enterprise are stored samples of Rebov equipment, which the plant at different times produced for over 36 years. Among military products, for example, on-board aviation station L091 "Los", a means of radio-technical protection of a cruise anti-ship missile of the Granit complex 3B-47 Quartz, a station for protecting front-line aircraft Gardenia-1FU, etc. A special place in the museum is occupied by equipment for creating false targets, which is installed on ballistic intercontinental range missiles. As one of the specialists present at the museum explained to me, this equipment creates a picture of the starry sky on the screens of locators, where each "asterisk" is a false target, among which it is impossible to detect a warhead with a nuclear charge.

A separate section of the exhibition is devoted to products manufactured in the years of perestroika and the period of timelessness and powerlessness that followed. On the shelves - irons, switches and voltage regulators for VAZ cars and other consumer goods, unworthy for a high-tech enterprise.

In the zero years, to the delight of workers who had not received a previous salary, and for the good of the country, the plant began to recover from the perestroika ruin. A large-scale technical re-equipment began, which enabled the company to master the production of special-purpose new generation - 1-4GHz SAP-14 active jamming stations, 2-18GHz SAP-518 individual protection, XC modules of L265В range for Su-34 fighters, etc.

In 2011, the plant mastered the production of frequency identification and reproduction systems (SOWCH) ​​for the products 1Л269 (“Krasuha-2”) and 1 РЛ257 (“Krasuha-4”). And in 2012, he began mass production of L265М10 products for Su-27CM and Su-35С aircraft. To do this, it was necessary to increase the authorized capital by placing additional shares to raise funds. The funds received in this way were sent to update the technological base for the production of broadband hybrid integrated circuits (GIS) and microassemblies (SMEs) for the microwave and millimeter wave ranges. Last year, mass production of the radio intelligence reconnaissance complex (ROC Moscow-1) began, a prototype of the aircraft protection system against MANPADS was manufactured as part of the Scan ROC. Production volumes in 2013 increased by 44%. In 2014, the state defense order increased by more than 20%. “Next year it can double,” suggested the head of the company. The most recent order is the creation of equipment for the newest L-175В "Khibiny" complex for Su-34 fighter-bombers.

Each product manufactured by the enterprise is unique and unique in its own way. It combines high technology and the most advanced materials. Among the products of the plant are hybrid micro-assemblies using thin- and thin-film technologies and vacuum deposition. Alexey Belevtsev, chief engineer of the enterprise, shows and tells how the resistor layer is made on the boards, which will then be installed in the equipment of a modern fighter. Chromium is deposited on a copper plate in vacuum, then electroplating copper is done, photolithography is done, then the board is poisoned and coated with nickel, and on top with gold. Nickel is needed so that gold does not diffuse into copper. These two elements penetrate each other very well. The boards prepared in this way are transmitted to the digital editing site, where diodes are mounted on them under a microscope. Splicing is done with 40 micron (human hair thickness) and 20 micron gold wire. Jumpers made of gold foil. The finished microassemblies are placed in a metal case, which is sealed with a laser. Air is pumped out of the microassembly, creating a vacuum, and filled with argon. In this neutral environment, according to Aleksey Belevtsev, the board “flies all its working life”. The principle of operation of the EW equipment also seems simple, when an expert gives an explanation. Having received an analog microwave signal from a target, the station converts it into digital one, processes it, endows it with interference, again converts it to analog form and “spits out” it into the target. That's all: the enemy's weapon is "blinded."

Today, in the total volume of production more than 85% - EW equipment for airplanes, helicopters, operational-tactical missile systems, such as Iskander, strategic missiles, and also spacecraft. In the near future, the plant will supply the first Himalayan EW stations for the fifth generation fighter T-50. “We are already making the first samples now,” the CEO said. According to the head of the concern, in the next three years it is planned to invest in the technical re-equipment of the plant and the release of new types of 1,3 equipment, RUB billion. This will ensure growth in revenues from the production of highly competitive defense products to 5 billion rubles. in year.

At the board of the concern, which includes about a hundred research institutes and enterprises specializing in the production of EW equipment, General Director of the Rostec state corporation Sergey Chemezov announced plans to place a state defense order for 4,3 billion rubles at the enterprise. with performance in 2015 – 2016.

Dmitry Rogozin, Deputy Chairman of the Government of the Russian Federation, Chairman of the Military-Industrial Commission under the Government of the Russian Federation who is present at the board, noted that the products of the plant and concern will be in demand in the coming years. First of all, it is connected with the plans of army re-equipment, including EW facilities: by 2015% by 30, and by 2020% by 70, and by 100% in strategic nuclear forces. “If anyone has rusty rockets, then definitely not with us,” said Dmitry Rogozin.

Speaking at the college, the vice-premier once again reminded that the Russian defense industry should rely more on its own strength. He focused on the need "when choosing a supplier, a strategic partner in the supply of machine equipment, stand base, as well as components for complex products, carefully look to pursue a conscious and consistent import substitution policy."

Over the past 12 years, the plant has purchased and mastered high-tech machines. According to their manufacturers, you can study the geography: Austria, Israel, USA, Taiwan, Switzerland, South Korea, many machines from Germany. The newest machine - 2014 year of manufacture. With great effort, it was necessary to literally mine a CNC lathe-milling machine from Japan, capable of processing parts with micron precision.

US HELP WITH SUPPORT ON OWN FORCES

If the situation at the plant and in the defense industry as a whole is leveled off with the fleet of machines, this cannot be said about the domestic microelectronic industry, which lags behind world competitors in growing crystals and manufacturing microwave transistors. According to the head of the company, the share of imported electronic component base in the domestic EW means does not exceed 20%. Deliveries are mainly from Southeast Asia. However, the NG correspondent saw components with Xilinx marking in the assembly shop, and this is a well-known American company, whose headquarters is located in San Jose (California). Now the implementation of plans for the production of smart weapons can be severely slowed down, as Washington announced new sanctions against the Russian Federation in connection with the situation in Ukraine. “We will focus on certain areas of high-tech exports in the field of defense, which, it seems to us, cannot be implemented in the existing climate,” said Barack Obama.

True, it is not entirely clear how the White House will be able to carry out this threat. After all, Russia is buying from the US not a piece of goods, but a kind of consumer goods, although it is very technological. For example, Californian products are 51% in the microelectronics market. And it’s not at all necessary to buy the same Xilinx components directly in the USA.

But even in the absence of real consequences from the imposition of US sanctions, we must revive our own microelectronics industry. “First of all, betting on our own strengths. Because, as in past centuries, when the sovereign emperor said that Russia has no allies except the army and fleet, and now the same thing. Only we, in addition to the army and navy, have Strategic Missile Forces, which is somewhat reassuring, ”said Dmitry Rogozin.

The Ministry of Industry and Trade has developed a strategy for the development of the Russian radio-electronic industry up to 2030. Deputy Minister of Industry and Trade Yuri Slusar spoke about it at the conference "Russian microelectronics: development prospects", which took place in Moscow on April 22. “In the document, we took into account the tasks of creating the innovation system of the Russian Federation, indicated in the May decree of the President of the Russian Federation on 2012,” said Yuri Slusar.

How can you not remember the catch phrase: Russian harnessed for a long time, but quickly go. It is planned, in particular, to increase the production of EW systems with 228 billion rubles. in 2012 year to 1,6 trillion rubles. in 2030 year. But the experience of previous decades suggests that from plans to implementation is a huge distance. Much of the new plan of the Ministry of Industry and Trade cannot but cause concern for the fate of Russian microelectronics. For example, by 2030, the share of domestic producers in the priority segments of the domestic market is planned to be increased only to 43% (in 2012, this indicator was 25%). The gradual reduction in the share of public investment in research and development (R & D) from 50% to 15%, as well as the transfer of the dominant role of financing to enterprises, also alarming. It is necessary to understand - from their own budgets, in which they have little interest.

The problem will have to be solved. And the sooner, the better, otherwise the ambitious plans to create a "smart weapon", the implementation of which is already directed billions of budget rubles, will remain only on paper.