"Mistral" on the background of the international situation

19 May 2014
114
On April 30, the aft section of the amphibious assault ship dock (DVKD) “Sevastopol” was launched at the Baltic Shipyard (St. Petersburg). In the middle of June she will be sent to the shipyard of STX Europe in Saint-Nazaire, where French specialists will complete the assembly of the ship's hull. Last week, the completed ship of the same type, the Vladivostok, made its fourth voyage for testing. Construction and testing of two amphibious ships of the French Mistral project continue in full accordance with the work plan. However, the work of French and Russian shipbuilders is accompanied by many, at least, ambiguous statements of European and American politicians. 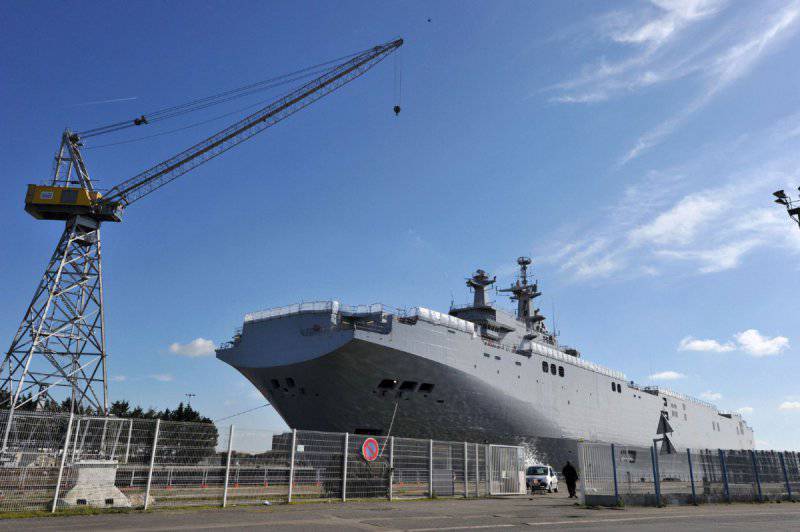 Foreign states that do not share Russia's position in the current Ukrainian crisis are trying to find new levers of pressure on it. Among other things, it is proposed to use the Russian-French contract for the construction of two amphibious assault ships of the Mistral type as such a “lever”. Russia in the 2011 year ordered two such ships from France. There is also an option for the third and fourth ships of the same type. Until recently, the purchase of ships from France was the subject of numerous disputes, but still did not go to the international level. Now, ministers and presidents of several foreign countries joined the dispute.

For almost three years the contract for the construction of ships was considered only from an economic and military point of view, but not so long ago politics intervened in the matter. In addition, a third party, the United States, was actively involved in the discussions. The United States, pursuing its own policy toward Russia, demands from official Paris not only to join the existing sanctions against Moscow, but also to take its own steps of this kind. First of all, the French leadership is required to terminate the contract relating to two Mistral-type DCCDs.

The French leadership was in a difficult situation. It is under pressure from one of the main allies - the Americans. France, on the other hand, must take into account the terms of the contract. STX Europe shipbuilders are obliged to transfer two landing craft to Russia, and the breach of the terms of the treaty threatens penalties and fines. Thus, the French leadership has to choose between political and economic interests.

The complexity of the situation is vividly demonstrated by the statements of high-ranking officials of NATO countries and France, voiced in the last two weeks. 8 May official Washington reaffirmed its position on the issue of building French ships for Russia. The next day, NATO Secretary General Anders Fogh Rasmussen recalled that the Alliance had ceased military cooperation with Russia. In addition, he recommended that the organization’s member countries do the same.

The day after the NATO Secretary General, the French President Francois Hollande made his statement. He noted that the French side continues to perform work in accordance with the signed contract. Almost simultaneously with the president, French Foreign Minister Laurent Fabius expressed his opinion. In an interview for the Washington Post, he said that the final decision on the two landing ships would be made in October. A few days later, he recalled the final decision in the fall, but confirmed that all work was being done in accordance with the contract. L. Fabius acknowledged that France has no legal reason not to comply with the terms of the contract.

In general, the position of the French authorities on the construction of the Vladivostok and Sevastopol DVKD looks quite balanced, although taken under pressure from two sides: all work will be continued, but in October, official Paris intends to make a final decision. How it will be and whether it will be at all - time will tell.

In the meantime, Russia continues to fulfill its obligations. In the middle of last week, RIA News quoted the representative of the company Rosoboronexport Vyacheslav Davydenko. According to him, Russia regularly transfers payments to the French shipbuilders as part of a contract payment. Timely payment is one of the reasons that both parties carefully follow the schedule.

In early June, about 400 Russian sailors, the future crews of the new landing ships, will arrive in Saint-Nazaire. In France, they will undergo the necessary training course, after which they will be able to work on new ships. Crew training, like all other work, is still being carried out in full compliance with the schedule.

The financial aspects of the contract turn out to be one of the most painful issues for France. In accordance with the agreement of 2011, Russia will pay approximately 1,2 billion euros for two ships. If Paris “joins the sanctions” and prohibits shipbuilders from transferring ships to Russia the fleet, then he will have to return the money already transferred (according to various sources, Russia has already paid more than half of all the work), and also pay a penalty, the exact amount of which is unknown. Thus, when the contract is broken, France will receive two ships with which it will be necessary to do something. In addition, such an unreasonable move will entail fines and loss of trust from potential customers.

In the context of finance, it will be useful to recall the option to two more amphibious ships. It was originally intended to purchase four Mistral type DVKDs. However, at the end of 2012, a different decision was made: according to the updated plans, so far France should build and transfer to Russia only two new ships. Having gained experience in operating such equipment, the Russian military will decide whether they need two more Mistrals. Thus, the contract for the third and fourth ships can be signed no earlier than 2015-16. In the light of recent events, such plans of the Russian Ministry of Defense look very interesting.

Given the possible signing of an additional contract, France finds itself in an even more difficult situation. Having refused to give Russia the transfer of the Vladivostok and Sevastopol ships, the French authorities will hit hard on their shipbuilding. The STX shipyard in Saint-Nazaire and related enterprises will not receive 1,2 a billion euros for the first two ships, and will also lose any opportunity to earn money on the construction of the third and fourth Mistral for Russia. Total, the total cost of failure may exceed 2,4-2,5 billion euros, not counting fines.

As for the political component of the current situation, it is not the first time when France has to make decisions under the pressure of foreign partners. The first statements condemning the delivery of Russian ships appeared in 2009, when the two countries were only discussing the terms of a possible contract. Then officials in the US and European countries spoke in a disapproving tone, and this pressure continued for the next few years. However, as a result, the contract was signed, with the result that by now one ship has been built, and the construction of the second one will be completed no later than autumn. It follows from this that the French authorities preferred a promising monetary contract to preserve good relations with foreign partners. It is worth noting that the United States or European states only condemned the signing of the contract, but did not take any real action.

Official Paris is again under pressure, and this time it has to take into account the possible payment of a penalty in the event of a contract break. Apparently, any decision of the French authorities will have negative consequences for the country, which is why they are literally trying to drag out time for now. The ministers of defense and foreign affairs, as well as the French president, have already announced that the final decision on the landing craft for Russia will be made only in the autumn. They are probably hoping that by this time the international situation will stabilize and that shipbuilders will have the opportunity to conduct business without regard to third countries.

Meanwhile, officials from different countries continue to discuss the implementation of the Russian-French treaty, and STX Europe employees continue to carry out all the work under the existing contract. The position of the shipbuilders is simple and clear: the order has been received and must be carried out without regard to political intrigues.