13 May 2014
17
After the war, many countries thought about creating specialized military transport aircraft. During the Second World War, for these purposes, vehicles were often used that were converted from serial bombers. In the US, they began working on a full-fledged transport aircraft project in 1947. It was this year that the US Air Force formed its requirements for a strategic transport aircraft. Negotiations on its design and construction were initiated with Douglas. Work on the project ended with the creation of the C-124 Globemaster II.


The aircraft was created on the basis of the previous model C-74, while it had a higher fuselage, powerplant, which included the X-NUMX engine R-4-4360 with 49 horsepower. each (3500 kW) and reinforced chassis. The first flight of the prototype of the aircraft under the designation YC-2160 took place on November 124 27 of the year. Shortly after the series of tests was completed, the aircraft was put into mass production. The first serial modification received the designation C-1949A. In total, 124 C-204A transport aircraft were produced during production, the first production vehicle was transferred to the US Air Force in May 124. 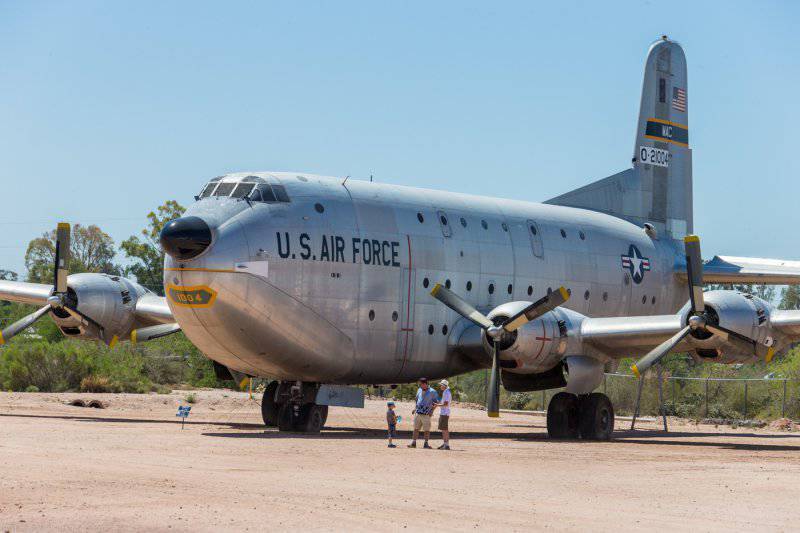 Total produced two major versions of the aircraft C-124A and C-124С, the latter received radar and more powerful and sophisticated engines. An experimental version of the aircraft was also created under the designation YC-124B, equipped with a HP 5425 HP engine. Together with the C-133 transport aircraft, the Globemaster II was in service with the US Air Force until the 1970s, when it was replaced by a new strategic military transport aircraft C-5A. Some aircraft Globemaster II after the decommissioning of the Air Force were acquired by private transport airlines.

The most massive modification of the aircraft was the C-124C version, which received more powerful R-4360 engines, as well as the meteorological radar, which was installed in the characteristic nose fairing. Petrol heaters were installed inside the wing fairings. The overall production of the C-124C transport aircraft was 243 aircraft. At the same time, the last plane was handed over to the US military in May 1955.

The fuselage of the strategic military transport aircraft C-124С Globemaster II had a double cargo door located in the nose of the aircraft. It was equipped with a built-in loading ramp. Electric winches were located in the middle part of the aircraft fuselage, as well as two ceiling cranes (the load capacity of each beam was 7257 kg). Both crane beams could move along the entire length of the cargo compartment, which was 23,47 m. The cockpit was designed for 5 crew members and was located in the bow. When using the aircraft as a transport (using 2's cargo decks), he could take on board up to 200 fully equipped soldiers, or up to 123 stretcher, 45 outpatient patients and also 15 military medics. 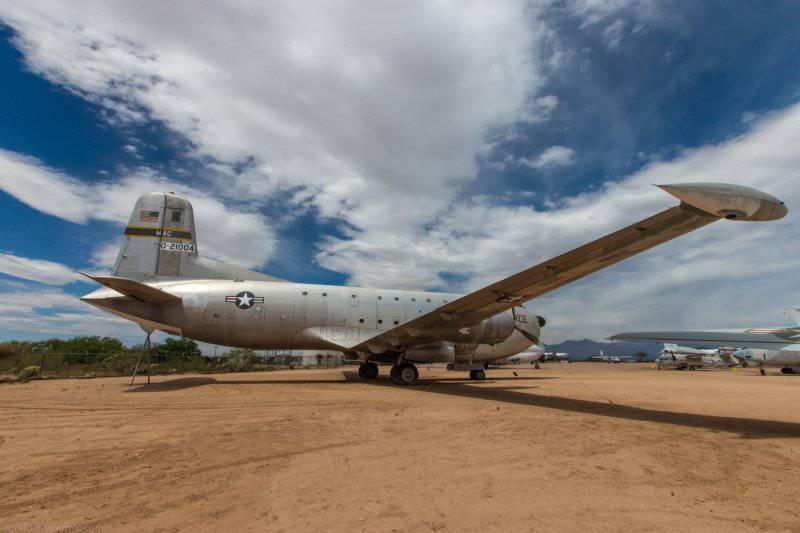 One of the serially produced C-124 Globemaster II aircraft was converted into a flying stand, which received the designation JC-124C. This machine was used to test the Pratt & Whitney XT57 engine (engine power was 15 thousand hp). This engine was designed for the new C-132 aircraft, which was designed by the Douglas company. The carrying capacity of the new machine was supposed to be 60 tons. However, during the tests with this engine, a large number of problems arose, after which in 1957 the program for creating the C-132 was curtailed.

In the flight biography of the strategic military transport aircraft C-124 Globemaster II there is little interesting, but one case may deserve attention. Airplane 509th aviation The squadron, piloted by a crew under the command of Major Walter Wagner, flew from Walker Air Base (Roswell Air Force Base until 1947) on Wednesday March 21, 1951. The plane was heading to the UK at Lakenheath Air Base. Onboard there were 9 crew members and 44 passengers, the main of which was Air Force Brigadier General Paul Thomas Cullen. Cullen was a major specialist in organizing aerial reconnaissance and was sent to the UK to form the 7th strategic aviation division there, together with officers subordinate to him. 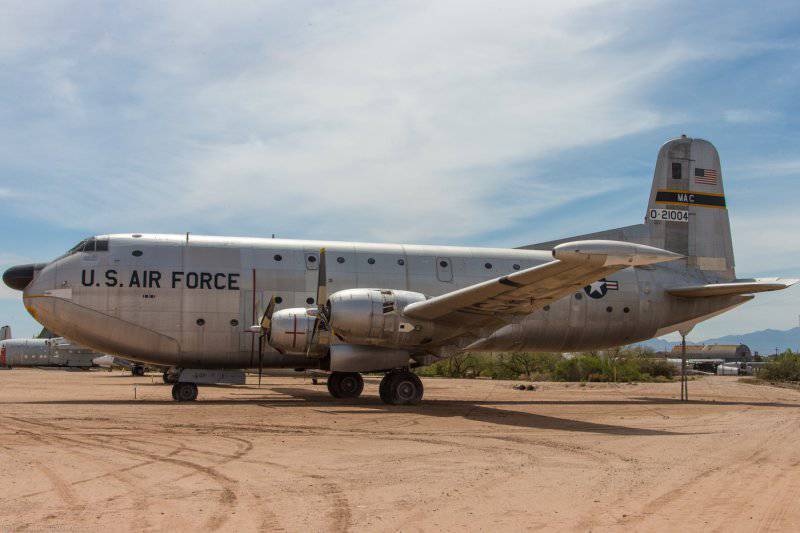 On Good Friday, 23 March, 1951, a fire took place on the flight route in the sky over the Atlantic. At this point, the aircraft is located approximately 1,5 thousands of kilometers southwest of Ireland. The crew sent a distress signal and reported what had happened on board, having decided to bring the plane on. The drive was successful, the plane remained intact, and all the people rescued the life rafts into the 5. All of them had emergency radio stations, water and food supplies, and signal flares.

A Boeing B-29 Superfortress, based in England, was raised to search for people from a splashing plane. The crew of the aircraft found life rafts, people who were on them launched signal flares into the sky. However, there was no rescue equipment onboard the B-29, so he only made circular flights over the C-124 landing place, passing the coordinates of this place and waiting for the rescue aircraft, but no one arrived at the crash site. After the plane ran out of fuel, he was forced to return to the air base. 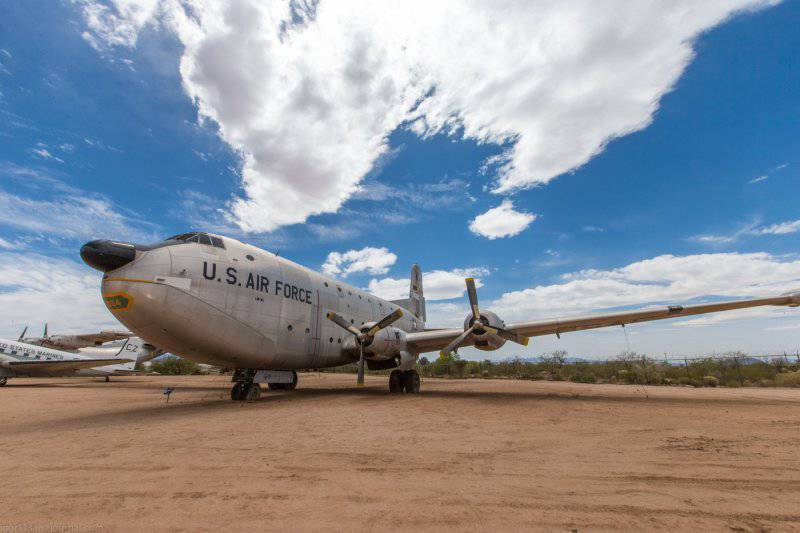 Only later 19 hours on Sunday 25 March rescue ships and aircraft, including the US aircraft carrier USS Coral Sea, arrived at the landing site. However, in the indicated place they could not find either people or a plane. The sea surface was inspected over an area of ​​many thousands of square miles, but the rescuers did not manage to find any wreckage of the aircraft, nor any life rafts, nor the people who safely relocated there. All the people aboard the plane are gone. What happened to them and the plane is not known until now.

According to one of the versions, the crew and passengers of the plane could be abducted by Soviet sailors. In this area, increased activity of the Soviet Navy, both submarines and surface ships. Of particular value to the USSR could be the Air Force Brigadier General Cullen and his knowledge. However, the version of the abduction by Soviet sailors seems doubtful, since large search formations of the USA and Great Britain were concentrated in the area. Yes, and hide the abduction of 53 people for such a long time after the incident would be quite difficult.