11 May 2011
9
The first production tank M1 Abrams left the factory conveyor of the tank plant in Lyme (Ohio) in February 1980. M1 Abrams was the first American a tankdeveloped after the end of World War II in accordance with new combat concepts of use. According to American experts, in its combat characteristics, it surpassed the M60A3 that was in service almost 2 times. The tank reached a speed of 72 km / h on the highway and up to 50 km / h when driving on a dirt road. Since 1980, more than 10 thousand Abrams tanks of various modifications have been produced. The cost of the tank is estimated at 6 million dollars.


Abrams has a classic layout and is distinguished by a rather strong armor of the welded turret and hull. In their front parts, multi-layered booking is used, which is similar to the English chobhem armor used on Challenger tanks and German Leopard-2 late series. Abrams is also characterized by a fairly large angle of inclination of the upper frontal sheet of the body relative to the vertical plane, which is an additional factor of protection and reduces its vulnerability to armor-piercing projectiles. To protect against cumulative ammunition, the top of the undercarriage and the side of the hull are covered with special mounted armored screens. The crew members of the tank are isolated from fuel and ammunition with special armored partitions, which gives both the crew and the tank additional protection. The tank does not have an automatic loader, so its crew consists of 4 people: commander, driver, gunner and loader.

The controls of the tank include a T-shaped steering wheel of a motorcycle type, which is associated with an automatic transmission. At the top of the column is the gearshift lever (4 transmission forward, 2 back). Regulation of fuel supply is carried out with the help of rotation of tips of handles of a steering column.

Initially, an 105-mm M68-1 rifled gun was placed in an armored turret, which was stabilized in the 2-x planes. The places of the commander and the gunner are located to the right of the gun, the place of the loader is on the left. In the stern of the turret in the isolated compartment in the ammunition is the main part of the gun ammunition (44 projectile from 55). Access to them is opened only when the armor partitions are opened. The remaining shots are in armored containers mounted in the tank hull (8 units) and on the tower polik directly in front of the loader (3 units). The ammunition of the gun included armor-piercing and sabot projectiles with a separating tray NXXX and M774 (cores from depleted uranium), M883 (core made from tungsten), and also training shells M735. 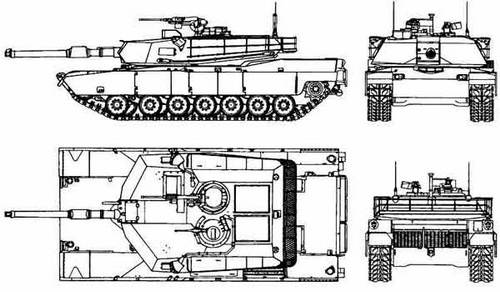 The tank received a fairly modern fire control system (LMS). The main aim of the gunner combines a daily visual channel, a thermal imager and a laser range finder. The daytime visual channel has a variable approximation (3 and 10 times). The thermal imager also has two levels of approximation (3 and 10), which allow detecting targets in the large (7,5 x 15 °) and small (2,5 x 5 °) modes of view.

It is noted that other members of the crew have far less ability to detect targets, compared with the gunner. The lower level of instrumentation of the driver and loader is justified by loading them with their direct functional duties, and at the commander of the car - saving money. The tank commander could find targets either with the help of an eyepiece aiming of the gunner's sight, or with the help of a commander's periscopic monocular sight. Observation through the latter was possible only in the daytime, and the monocular challenge did not allow for an autonomous (independent from the gunner) search for targets.

To provide a circular view, the commander's turret has 6 observation periscopes installed around the perimeter. Electronic (digital) ballistic computer, has a sufficiently high accuracy when calculating the angular corrections for shooting. The target distance values, which come from the laser rangefinder, the ambient air temperature, the side wind speed and the angle of inclination of the tool axle axis are automatically entered into it. Manual information is entered into it on the type of projectile, barrel bore wear, barometric pressure, as well as corrections for the misalignment of the direction of the aiming line and the axis of the barrel bore.

After the gunner detects and identifies the target, holding the crosshair on it, he presses the button of the laser rangefinder. There is a determination of the distance to the target, the value of the distance is displayed in the sights of the commander and gunner. After that, the gunner selects the type of ammunition, setting the four-position switch to the desired position. At this time, the loader charges the gun. After that, the light signal in the gunner's sight suggests that the gun is ready to fire. Corner corrections from the ballistic computer are automatically clogged. As a disadvantage, experts cite the presence of only one eyepiece in the gunner's sight, which increases eye fatigue, especially when the combat vehicle moves. 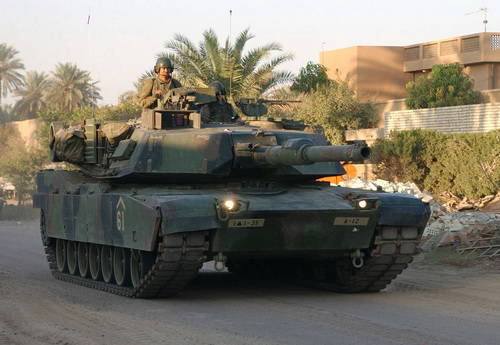 The engine compartment (MTO) is located at the rear of the tank. The AGT-1500 gas turbine engine is installed here, which is located in the same block with the X-1100-3В automatic hydromechanical transmission. The choice of a gas turbine engine is explained by American engineers with a number of its advantages. In comparison with diesel engines of the same power, the gas turbine engine has a smaller volume. In addition, it is almost lighter in 2, it has a relatively simple design and a more substantial (in 2 - 3 times more) work resource. Such an engine better meets the requirements of multi-fuel. Along with this, its disadvantages are called the complexity of air cleaning and increased fuel consumption. It is worth noting that the engine power in 1500 hp provides the MNNUMX Abrams tank with high acceleration performance - from acceleration to speed in 1 km / h it accelerates in 30 seconds.

Tanks M1 "Abrams" equipped with a system of protection against weapons mass destruction, which provides clean air through the filtering installation of air to the crew members' masks. It also allows you to create excess pressure inside the tank to prevent radioactive dust or any poisonous substances from entering inside. The crew has at their disposal chemical and radiation reconnaissance devices. To raise the air temperature inside the combat vehicle, you can use the heater.

The first improved version of the tank appeared in October 1984 of the year and was produced before the 1986 of the year (the 894 of the tank was released). His main difference from the original was more perfect booking. Simultaneously, work was underway to improve the combat capabilities of the tank, primarily its firepower. As a result of these works, the Abrams М1А1, whose production was launched in August 1985 of the year, was born, and the first production vehicles entered the tank units of the US Army in Europe in 1986.

Modification М1А1 received a new 120-mm smooth-bore gun of the West German development, which is used on Leopard-2 tanks. Due to the use of larger-caliber guns, there was a decrease in the ammunition load to 40 unitary loading shots, which are placed in a specially designed armored ammunition. Most of the ammunition ammunition consists of two types of projectiles: armor-piercing sub-caliber with a feathered core and a separating tray (produced from depleted uranium or tungsten) and multi-purpose (high-explosive and cumulative action). All shots have a steel pallet and sleeves with a burning housing. The armor protection of the tower was strengthened. As a result of all the changes, the combat weight of the tank increased to 57 tons. 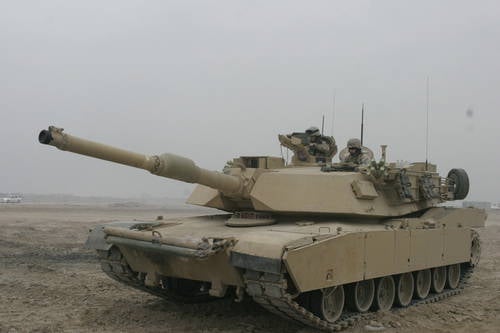 In 1988, the production of M1А1 tanks began, receiving armor from the frontal parts of the turret and hull with inclusions of depleted uranium. The density of the latter in 2,5 times higher than that of conventional steel armor. The use of this technology, according to American engineers, has significantly improved the armor protection of the tank, including against the effects of cumulative munitions. At the same time, the mass of the tank with such armor increased by another 1,5 tons and came close to the mark of 60 tons. Specialists emphasized that the low level of natural radioactivity of depleted uranium is safe for the crew of the tank.

The next version of the tank M1А2 is a further development of the existing machine. The complex of improvements, united under the name “Block-2”, consists of an independent thermal sight, which was received by the tank commander, the driver’s thermal imaging device, the on-board information system with means of displaying the situation and new laser range finders.

An independent thermal sight made possible the simultaneous work of the commander and the gunner. While the tank commander can search for new targets in smoke or dark conditions, the gunner can fire at previously detected targets. The thermal sight is placed on the roof of the turret in front of the loader's hatch, the image of the terrain (the device can be rotated 360 degrees) is fed to the screen located in front of the tank commander. The use of a new on-board information system, which replaced the fire control systems with a single electronic complex, including a processor for processing signals from all sensors, weapons control units, situation display indicators, significantly reduced the time to prepare the tank for a shot.

According to Western experts, the tank МХNUMXА1 "Abrams" added to the effectiveness of the attack compared to the base model at 2%, and in the prepared defense at 54%. Combat rate increased by 100 times. In the course of further upgrades of the machine, it is planned to use a new 2-mm gun (lightweight) and new ammunition, to equip the tank with an automatic loader, a new MSA, an automatic search system, a target detection and recognition system, and a more advanced suspension system, possibly hydropneumatic.
Ctrl Enter
Noticed a mistake Highlight text and press. Ctrl + Enter
We are
Middle tanks in the postwar period. "432 Object"T-72B vs M1A2 "Abrams"
9 comments
Information
Dear reader, to leave comments on the publication, you must to register.