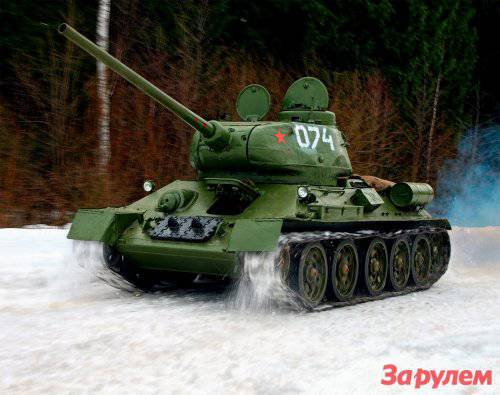 No matter how much is written about the war ended 65 years ago, and about it tank - just do not tell, and even more so not feel. But getting away from this topic is impossible ...

The order of the gray-haired, gloomy colonel from the old, 1968, film “In War, as in War,” somehow crashed into memory once and for all: “Support us with fire and maneuver!” ...
With difficulty, touching everything with what I can, for everything I can, squeezing myself into the driver's seat, I attach myself to uncomfortable pedals, trying to cope with the gear shift lever, as if welded to the floor. I press the button. Briefly and deafly, the starter roared and the car was filled with the roar of an old but vigorous 500-strong diesel. There will be no fire today, but we will try to support the maneuver of those who fought on such machines more than 65 years ago.

Now it is difficult to imagine that the car, recognized as outstanding by numerous historians, politicians, and the military — from Churchill to Guderian — was not at all easy to reach the conveyor and military units. The brainchild of the designers of the Kharkov Locomotive Plant, headed by Mikhail Ilyich Koshkin, had many opponents - a tank, the work on which was started in 1938, is very unusual. The car turned out to be unusually heavy, because it had protection not only against small arms. weapons, as the previous mass Soviet tanks. They were suspicious of both the diesel engine and the absence of ... wheels. After all, the USSR will “beat the enemy on its own territory,” which means that the tanks will quickly march along European highways. Has anyone remembered these plans in the terrible autumn of 1941 or in the hard summer of 1942? If they remembered, then with bitterness ...
In 1938, the future war was seen differently. But Kharkov designers, fortunately, found supporters in the army. The prototype T-46-5 was followed by an A-20 with a B-2 diesel engine. Then they created prototypes A-32, including with a powerful 76-millimeter cannon, and at the beginning of 1940, an option with thicker armor A-34. It was he who, after minor modifications, became the serial T-34.

The final decision on the release of the machine was made in Moscow, in March, 1940. From Kharkov, in order to conduct the last stage of the tests, the tanks drove into the capital ... on their own. After showing the top management and testing at the test site in Kubinka near Moscow, the cars again went independently to the “locomotive building”. The total mileage was about 2800 km. On this trip in the dank spring of 1940, Koshkin got pneumonia, which became fatal. In September, the 1940-th talented designer died, but his car, fortunately, has already become serial. 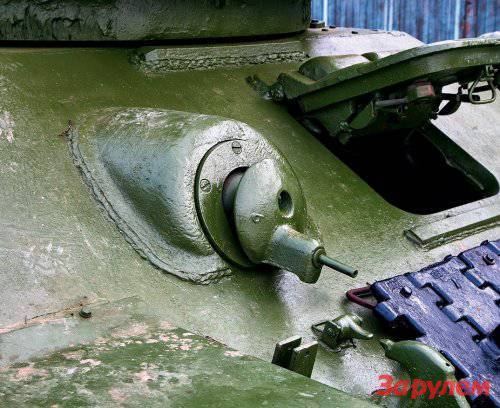 By June, 1941 was made around X-NUMX T-1000. According to the requirements of the military, a modernized version was prepared: in particular, they tried to improve the driver’s not-too-comfortable workplace. But on June 34, the people's commissar of defense S.Timoshenko and the head of the General Staff of the Red Army G.Zhukov demanded to increase the production of serial machines. The time for experiments is inappropriate: in six days the Germans entered Minsk, in a month and a half - in Smolensk ...

In the films of childhood and adolescence, the work of tankers looked somewhat dashing and even romantic. One of the few pictures that more or less closely transfer the work of four people in a tight armored box, filled with the roar of the engine, the roar of shots, hot powder powder - the same work of director Viktor Tregubovich “In war as in war”. There, however, fighting in self-propelled guns, but essentially it does not change. Here, in 2010, we have neither shots, nor burning, much less the risk of getting hit by a mine or being targeted by the Tiger ... 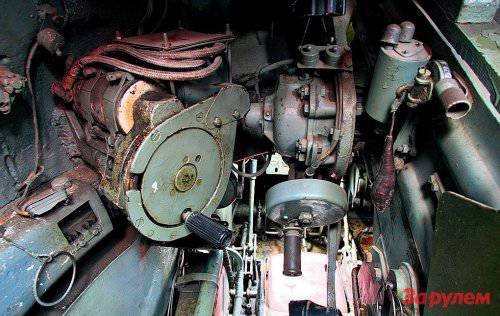 Place gunner. The left wheel is responsible for the rotation of the tower, the right - for the movement of the trunk. There were electric drives, but more often the arrows worked manually - it was more reliable, and more accurate.

Pressed tight clutch, hardly drove first, the levers are fully on themselves (drivers-experts of this car say: effort up to 70 kg!), Now you can throw the clutch and, adding gas, release the levers forward. Go! Only this would have to be done much faster! What kind of attack here? Even with the hatch open, a medium height driver is forced to bend his head to see the road right in front of the car. And how to go when the door is closed? And how much to train, until you learn how to properly wield an unyielding "poker" box?
True, the levers, braking friction, work is easy. He pulled the left - the car turned even more obedient than waiting. Of course, the T-34 is able to turn around on the spot - one of the levers to the end itself and add gas. Only it is unusual to realize that somewhere there is a barrel turning from above. 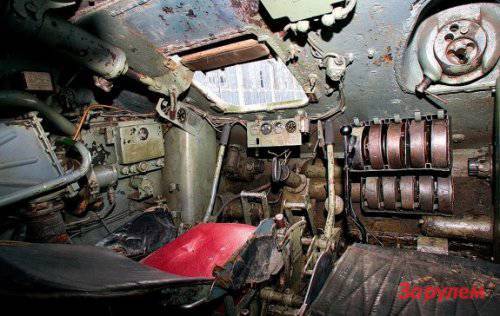 A round pedal behind the right lever is gas, the left is a clutch, in the middle is a mountain brake. To the left of the right-hand friction lever there is a handle that sets the minimum engine speed. On the right - the gearshift lever, to the right - shops for the machine gun.

On the right is a radio operator, under whose feet there is a emergency evacuation hatch. But, as a rule, it turned out to be useless, especially if the car got up in a rut. They say that the clever radio operator managed to leave the tank through the driver's hatch almost before him. Three more are behind and above (in T-34-85, the crew was enlarged, freeing the commander from the functions of the gunner). The commander on the left, above all, on the folding stool - "roost." Under him, actually the head between his knees - the gunner, and on the right - loader. The sleeves jump out just between him and the commander. It’s good that the tracked vehicle has a wonderful smoothness. Otherwise, it would be completely incomprehensible how you can fight - to aim and hit something!
A cold wind blows in the face, legs go numb from an uncomfortable landing, overstrained arms seem to freeze to the levers. But I do not want to stop - ashamed in front of the machine and those who once went to fight with it. 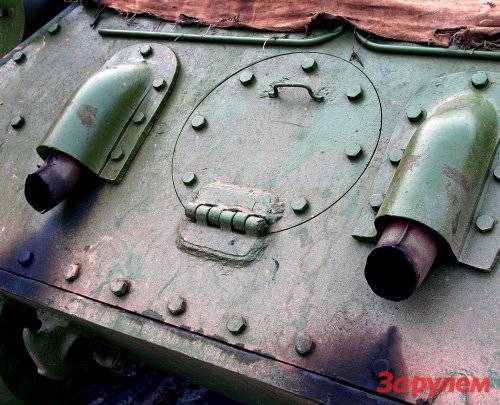 Between the exhaust pipes (they are covered with armored caps) - a hatch for access to the transmission nodes.

“On October 6, south of Mtsensk, the 4-I tank division was stopped by Russian tanks ... For the first time, the superiority of the Russian T-34 tanks was manifested in a sharp form. The division suffered significant losses. The planned attack on Tula had to be postponed. ” The intonation of post-war memoirs of Heinz Guderian is extremely impassive. According to eyewitnesses, in the autumn of 1941, when the first Thirty-Fours stitched through the towers of the German T-IIIs, the shells of which rebounded from the powerful inclined armor plates of the Soviet machines, the general reacted much more emotionally. By the way, he also wrote that after a thorough inspection of the captured T-34, the Germans even had an idea to copy the car. But “by the way, it was not embarrassing to imitate that confused me, but the impossibility of releasing the most important parts of the T-34, especially the diesel engine, with the required speed.” 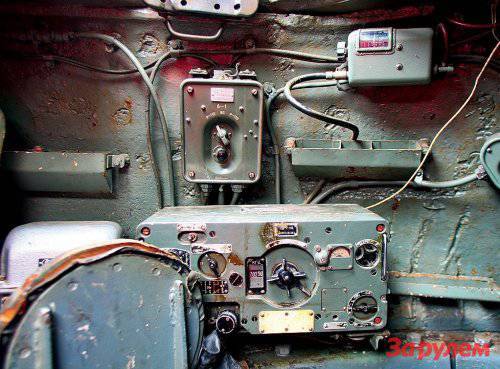 The latest T-113-34 and other post-war armored vehicles equipped the P-85 radio station.

Many call the "thirty-four" the best tank of World War II. It really was maneuverable, economical, relatively easy to manufacture. The diesel engine provided better fire safety than German cars. But the shortcomings of the T-34 also lacked: weak optics, uncomfortable driver's seat. Motor B-2 devoured a lot of oil. It was his, by the way, in addition to diesel fuel, carried in barrels fortified on the hull. The life of a tank during a war is extremely short, not only because of enemy cannons and mines. The warranty life of the engine was only about 100 hours, and the first engines were serving a quarter of this period. Still would! The engines, and the tanks themselves, were made mainly by half-starved women and boys from the trade schools (factory schools). These rank and file soldiers of the Great Patriotic War did not have Guards badges on their chests, they rarely had medals and orders ... 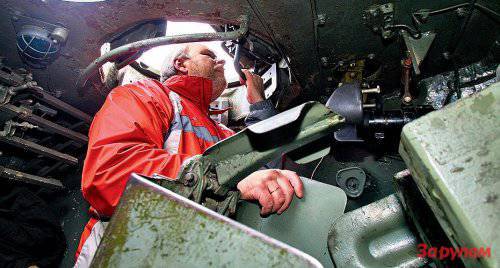 The commander was located above all, right under the hatch. He, like the gunner, evaluated the combat situation through a periscope.

The Germans did not copy the “thirty-four”, but of course they did not refuse to create new cars. In December, the 1942-th under the Mgoy our tankers first met with the "panthers", which our 76-millimeter cannons could hit only with the 500-600 m. And then the "tigers" appeared with the most powerful frontal armor, which was hitting the Soviet shells. Tankers who went through the war told that up to ten T-34s were sometimes killed in a battle with one Tiger. And even after the appearance in 1943 machines with a more powerful 85 mm caliber gun, “tigrophage” pursued ours to the very end of the war. The price of Victory can be judged by the dry and terrible front-line statistics. From 5 to 20 in July, 1943, near Kursk, the 1 I tank army from 552 machines lost 443, of which they were burned - 316! But in each tank there are four or five yesterday's boys ... You can measure the war with bridgeheads and arrows on the maps, but it’s more correct to do with the lives of ordinary people who were taught to overcome normal human fear and help those who are nearby to overcome it. And this, in fact, is - courage. 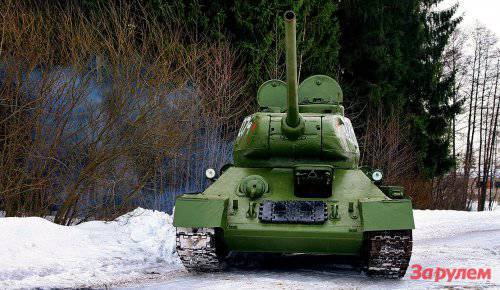 ... So the levers seem to have become lighter. The “Thirty-Four” menacingly roars with a motor, as if we with it really have to support the fire and maneuver of the guys who went on the attack more than 65 years ago ...

The editors thank Director General of the Mosfilm Cinema Concern K. Shakhnazarov and the military-technical base of the film studio for providing the car and assistance in preparing the material.