April 30 2014
14
In the early eighties, the Pentagon began a research program aimed at creating promising equipment for the ground forces. It was supposed to create several new combat vehicles for various purposes, including the main tank. The tank, developed as part of the new program, was supposed to be a replacement for existing M1 Abrams combat vehicles. It was assumed that the first production Tanks The new model will enter the troops around the mid-nineties. 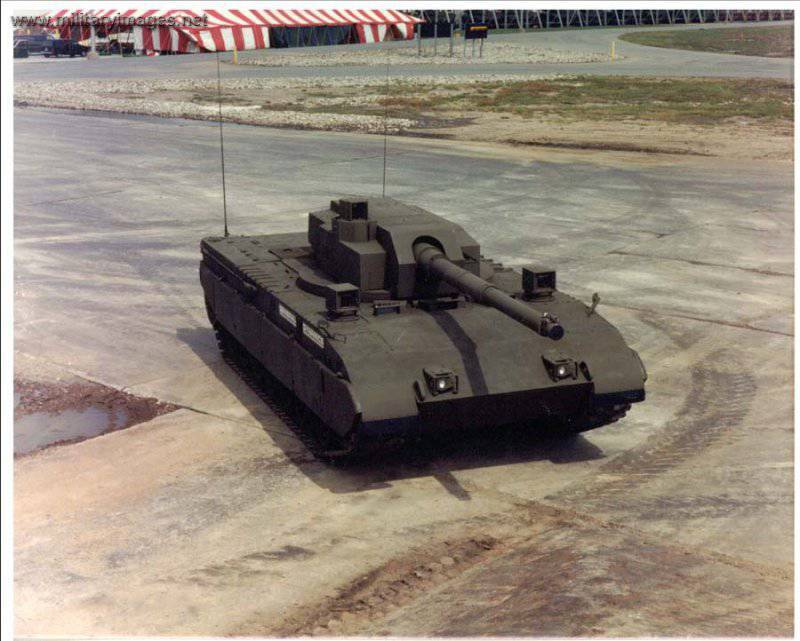 The aim of the project, which received the designation M1 Abrams Block III, was to create a promising main tank, which in its characteristics surpasses the existing equipment of this class. As the main methods of improving the characteristics, a new layout of the internal volumes of the corps, an uninhabited fighting compartment with an automatic weapon system, as well as the use of a number of new units of the power plant and electronic equipment were called. In addition, it was assumed that in the design of the new armored vehicle some units of existing tanks would be used, with the help of which it would be possible to simplify and cheapen the production of promising technology.

The main tank M1 Abrams Block III, as conceived by the designers of General Dynamics Land Systems, was supposed to have a radically new layout for American tank building. To increase the level of protection, it was proposed to increase the thickness of the upper front part of the body, as well as place it at a large angle to the vertical. Such an arrangement of the front of the hull made it possible to create a relatively large single volume to accommodate the entire crew. In front of the hull of a prospective tank, it was proposed to place the workplaces of three tankers side by side (commander, driver and gunner). With this, it was possible to improve the layout of the internal volumes of the hull, as well as to increase the level of protection of tankers.

In the middle part of the hull of the new tank should have been placed a tower with a gun, equipped with a set of automation. The latter was supposed to carry out loading and pointing guns at the crew commands. The proposal to create a uninhabited fighting department meant the development of the original automatic loader and a number of other equipment. 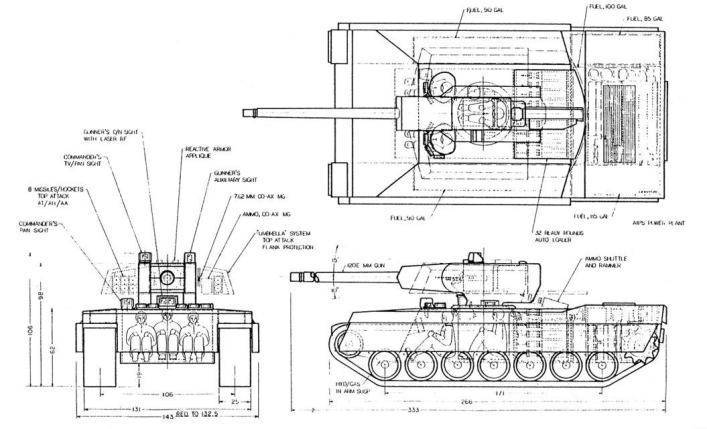 The engine and transmission were to be placed in the rear of the hull. Such a placement of the power plant was tested in practice and would not require additional research.

In the middle of 1983, the construction of the first experimental machine, the SRV (Surrogate Research Vehicle), was completed. The SRV was designed to explore the new layout of the units inside the tank hull. The main objective of the SRV test was to work out the crew accommodation in a single volume in front of the hull. The basis for the experimental machine SRV was the chassis of the tank M1 Abrams. During the construction of the SRV base body has undergone significant changes. Due to the specific placement of the jobs of the three tankers had to significantly lengthen the front part of the body. The power plant and chassis remained the same. On the pursuit mounted weight imitator turret monitors assembly. According to some reports, the SRV was later equipped with a laser system, which allowed for preliminary studies of the characteristics of the gun.

Tests of the experimental SRV machine allowed to study the pros and cons of accommodating the crew in a single volume. The main advantage of this hull layout was the ability to provide a higher level of crew protection. In addition, the placement of other units was simplified. At the same time, the original location of the tank crews affected the complexity of the onboard equipment: the gunner and the commander needed relatively complex systems to monitor the situation and control the armament. However, these difficulties did not stop the project. 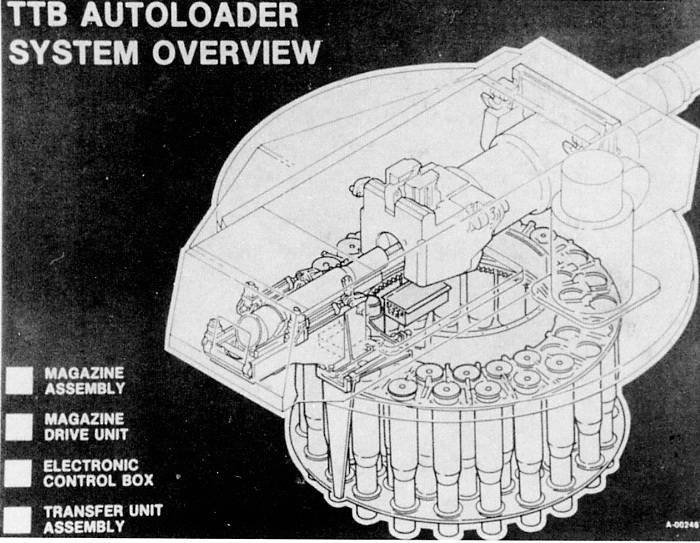 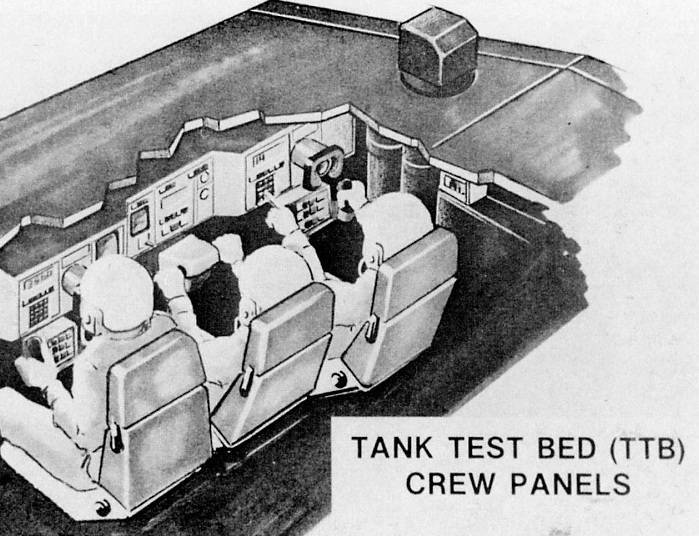 At the end of testing the experimental machine SRV, the construction of a new prototype started. The basis for the experimental TTB prototype (Tank Test Bed) was the M1 Abrams tank chassis, refined based on the SRV test experience. The TTB machine also had a single volume for the crew in the front of the hull, but differed in units mounted on the tower chase. The new prototype was equipped with a combat module with an uninhabited fighting compartment and a smooth-bore M256 gun of caliber 120 mm installed on the original mounts.

Inside the body of the TTB car were units of automatic loader. 44 unitary projectile was proposed to be placed in a two-row carousel shop with a vertical arrangement of cells. At the command of the crew, the automatics had to remove the projectile of the desired type from the cell and feed it to the loading line.

It was proposed to place a piece of sighting equipment near the weapon. In view of the non-standard accommodation of the crew, a special system had to be developed using video cameras.

TTB prototype tests took place in the late eighties. Verification of the experimental vehicle showed that the proposed concept has great prospects and may be useful for creating new armored vehicles. Nevertheless, it was required to continue research and design work. Some elements of the perspective car needed further refinement.

At one of the stages of the M1 Abrams Block III project, there was a proposal concerning a significant increase in firepower. In the eighties, American gunsmiths worked on the project of a promising smooth-bore gun XM291, which had a caliber 140 mm. The gun itself, an automatic loader for it (XM91) and a family of 140-mm ammunition were developed as part of the ATAC project. Using the XM291 cannon could lead to a significant increase in the combat capabilities of tanks. So, the muzzle energy of the XM291 cannon was about twice that of the M256. In combination with the family of new ammunition, this was to significantly improve the performance of armored vehicles.

Having greater muzzle energy in comparison with the existing weaponsThe XM291 gun was noticeably lighter. The difference in weight XM291 and M259 exceeded 90 kg. The design of the 140-mm guns allowed the replacement of the barrel. After a relatively quick procedure (about an hour), a tank equipped with an XM291 cannon could use standard 120 caliber mm ammunition. Especially for use with this gun was created automatic loader XM91.

The development of the M1 Abrams Block III tank and a promising weapon for it continued until the early nineties. During the project, some success was achieved, and the new tank could get into the troops until the end of the decade. Nevertheless, the political situation in the world affected the fate of the project. After the collapse of the Soviet Union, the American and European military began to believe that the former potential enemy no longer posed a danger, and therefore reduced the cost of promising projects. A large number of programs were frozen, and some were closed. Among others, the project for the creation of a promising main tank came under reduction. 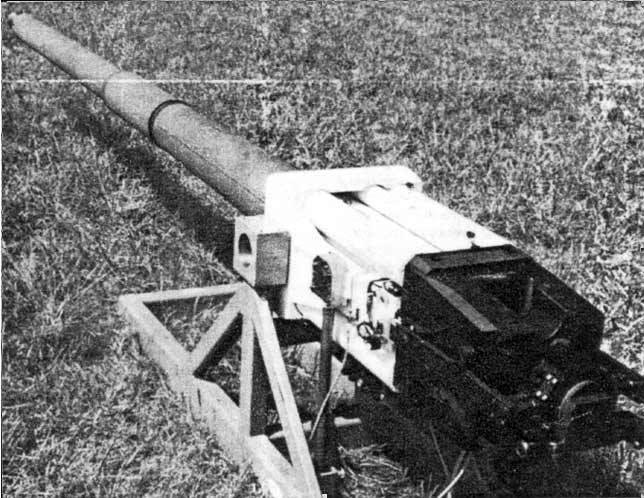 All work on the M1 Abrams Block III project was suspended and then discontinued. It was decided to further develop the tanks along the path of improving the existing machines of the M1 Abrams family without any major design changes. One result of this approach to upgrading armored vehicles was the cessation of work on the 140-mm XM291 gun. Despite its high characteristics, it did not correspond to the views of the military on the modernization of tanks.

Ctrl Enter
Noticed oshЫbku Highlight text and press. Ctrl + Enter
We are
"Abrams" without "dill" and embellishmentWunderwaffe for Pantservaffe. Description of the design of the tank "Mouse"
Military Reviewin Yandex News
Military Reviewin Google News
14 comments
Information
Dear reader, to leave comments on the publication, you must sign in.