In South America, the use of unmanned aerial vehicles (UAVs) is increasing, which is due to the requirements for the protection of borders and the protection of natural resources, as well as the fight against organized crime and riots.

The most experienced unmanned technology user in South America is Colombia, which began using UAVs from the 2007 of the year. Seven years ago, the Colombian Air Force (Air Force) adopted the first Scan Eagle unit developed by Insitu, a Boeing unit. Since then, the air force fleet has grown to 14 UAVs and an additional four Night Eagle UAVs equipped with special equipment for night operations. 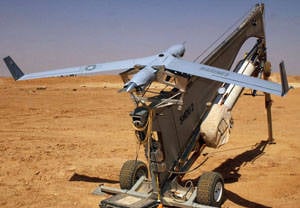 Unmanned aerial vehicles in Colombia are used to solve a very complex task of ensuring internal security. At the same time, the observation function, in particular, local drug trafficking, is also performed. BLAs are used to support other operations, including the fight against organized crime, as well as with the insurgents of the rebel groups FARC (Fuerzas Armadas Revolucionarias de Colombia - Ejército del Pueblo) and ELN (Ejército de Liberación Nacional).

The Colombian Air Force, in addition, began operating medium-long UAVs of the MALE (Medium-Altitude, Long-Endurance) long duration class - two Hermes-450 (Hermes 450) and one Hermes-900 (Hermes 900) produced by an Israeli company Elbit ”(Elbit), which arrived at the end of 2013 of the year as part of a contract that includes additional supplies. The ground forces of Colombia are armed with nine lightweight tactical devices RQ-11B from the US manufacturer AeroVironment. The possibility of acquiring drones is also considering the police.

The naval forces (Navy) use UAVs in the fight against drug trafficking through Ecuadorian territory on the way to markets in North America and Europe, as well as to prevent theft and smuggling of Ecuadorian oil, which cause annual damage to the local industry in the amount of 500 million dollars.

Since 2009, when UAVs began to be used, oil losses have halved and continue to decrease, according to a report from the Ecuadorian Ministry of Non-Renewable Natural Resources, from 2013. This motivates the Navy to seek funding for the purchase of an additional number of unmanned systems.

At the beginning of 2010, the SV of Ecuador ordered the 10 light drone Skylark-2 (Skylark II) to Elbit, which they plan to use both for solving combat missions, in particular tactical reconnaissance and target detection, and to monitor and control the border with Colombia.

Meanwhile, the Ecuadorian air force is investigating the potential use of high-altitude UAVs equipped with satellite communications, radar and electro-optical observation systems in order to monitor the terrain for receiving and transmitting data similar to those supplied by spacecraft, but at lower prices. This project, being developed in conjunction with the National Polytechnic University, was presented in 2008 to President Rafael Correa, and work with experienced devices continued in 2013.

In Brazil, the federal police operates the 12 UAV “Heron”, acquired by the parties from the IAI, starting with the 2009 year. They are regularly used to monitor the border in the north-west of the country in order to combat drug traffickers and smugglers. These vehicles are also expected to ensure the safety of the World Cup and the Olympics in 2016.

The Brazilian Navy is investigating the possibility of using UAVs for maritime patrols from coastal bases. At the same time, "Scan Needles" has recently been tested to perform similar operations when launching from the deck of a ship.

The Brazilian Air Force fleet includes four Hermes-450 UAVs acquired in 2011 and 2013, and the possibility of purchasing larger devices, given the size of the state territory and the length of borders, seems quite likely. In cooperation with the Air Force, the local company Avibras (Avibras) developed the MALE drone class Falcao (Falcao), but no statements have been made regarding its purchase.

The Brazilian aerospace company Embraer has teamed up with AEL, the local Elbit subsidiary, and Avibrasto, to jointly adapt the Hermes 450 to Brazilian requirements, as well as to develop a line of unmanned aerial vehicles in the future. aviation systems.

The Chilean Air Force operates three Hermes-900 UAVs acquired by the General Staff of the Armed Forces in 2011 to accomplish the tasks of observation and operational-strategic reconnaissance. This year, additional orders are expected for another three such devices.

Hermes-900 was also interested in the Chilean Navy from the point of view of observing maritime space. At the same time, the Marines use the Skua light tactical UAV developed by the local company RMS.

The Chilean ground forces, after a brief use in 2013 of two light machines Skylark-2, issued an order to the Israeli firm BlueBird Aero Systems to supply several Spylite drone of the same type. SV also collaborates with the Universidad de Concepcion University of Chile (Universidad de Concepción - UdeC) to develop the Lascar UAV of extended flight range.

In Argentina, under the control of the military, several UAV development projects are being implemented. These include The Guardian for the Navy, PAE 22365 for the Air Force and Lipan for the Air Force. But only the last of these devices is in trial operation on a regular basis.

Nostromo, a local privately owned firm that sold its UAVs to the US Department of Defense, delivered three of its Yarara drone to the Argentine Air Force UAV Flight School, created in 2011 year. However, the expected contract for the supply of a number of Hermes-450 devices, with the help of which it is planned to tighten controls on vulnerable parts of the border with Brazil and Paraguay, has not yet been signed.

The Peruvian armed forces and police in the fight against the Shining Path militant group in the south of the central region of the country use mini-UAVs, including Microfalcon and Orbiter made by Israeli Innocon ) and Aeronautics Defense Systems, respectively.

The Air Force has a need for larger-sized UAVs, but even though the international systems are constantly investigating suitable systems, the Ministry of Defense decided to give local industry a chance first, as Colonel Carlos Osiol said in 2012. He led an interspecific group that developed the relevant apparatus in cooperation with civilian technological organizations. Some of them have been tested in real operating conditions, but have not yet been put into production.

UAV Charrua (Charrua) local development adopted in Uruguay. Abroad, he ensured the successful fulfillment of monitoring tasks during peacekeeping operations and, in his own country, in fighting forest fires.

Bolivia and Paraguay have identified the needs for UAVs, which sooner or later will lead to the formulation of supply contracts.

According to Phil Finnegan, director of integrated corporate analysis for Teal Group (Teal Group), the South American UAV market will grow in the coming decade. Studies of the global UAV market for the 2013 year showed that Latin American countries spent 71,1 million dollars on their purchases. In 2022, this indicator will reach, as predicted, the level of 271,5 million dollars. At the same time, over the next decade (2013 – 2022), Latin America will spend a total of 1,7 billion dollars on unmanned aircraft systems.

Until now, Israeli firms dominated this market, but sequestration of the US defense budget will force American companies to look for new markets, including in the southern direction. At the same time, according to Finnegan, this is unlikely to crowd out the presence of Israeli industry: “Promotion of American products to the South American market will give impetus to rising costs for UAV purchases in the region, but the presence of Israeli industry is fairly stable and it will not give up. especially in Brazil. "

Brazil will continue to be the main UAV market in the region. The country's strong economy, the need to patrol large areas and upcoming major events, such as the World Cup and the Olympic Games, mean that Brazil will dominate this area.

In addition to Brazil, Finnegan singles out Colombia, Chile and Mexico among the most active unmanned aircraft users in South America. These countries are expected to increase their fleets in the coming decade, mainly as a necessary measure to combat drug smuggling.

South America is a novice UAV operator, and the demand for this type of aircraft in the region in the future will grow, opening up opportunities for importing drones and revitalizing the local industry to create them.