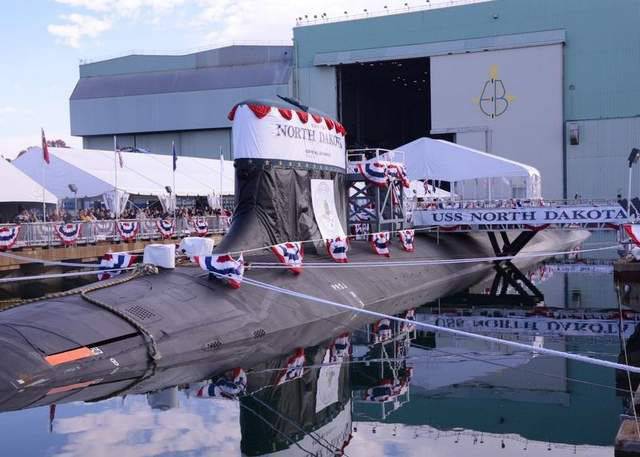 Washington - Problems with the supplier of components and the need to modify some of the design elements forced the US fleet to announce on Wednesday, 16 April, that the launch of the new North Dakota nuclear missile submarine is delayed and will not happen at the end of May, as was planned earlier.

"This decision is based on the need for additional refinement and certification work on the converted nose of the submarine and significant problems with the assembled and delivered components," - said in a statement the command of the naval systems of the Navy (NAVSEA).

The delay is a blow to the Virginia class submarine program, which has already earned a reputation not only for timely deliveries, but also for shipments ahead of the contractual date.

These submarines are jointly manufactured by General Dynamics Electric Boat and Groton, Conn., And Huntington Ingalls Newport News Shipbuilding from Newport News, Virginia. Each company manufactures specific components of each submarine, mainly in proportion 50 to 50. These shipyards alternate and take turns assembling, launching and manning submarines. Launched in September 2013, the submarine North Dakota (North Dakota) is being finalized by Electric Boat.

Both shipyards declined to answer specific questions about North Dakota submarine problems that prevent it from getting on balance. fleet.

Although the contract provides for the commissioning of North Dakota in August, EB was determined to postpone this date to mid-May. Reducing the ship construction time by weeks or months, as a rule, leads to significant savings for the fleet and good remuneration amounts for the shipbuilder.

Completing the construction of North Dakota is very important. Although the ship is the eleventh submarine of the Virginia class, it is the first submarine in the Block III variant with a converted bow, featuring two Virginia Payload Tube (VPT) two torpedo compartments and a reconfigured wide-aperture nose radar. Innovative VPT compartments are capable of storing and launching various weapons. This configuration allows you to get away from the 12 stationary bays that can handle only a limited set of weapons.

It is not clear whether the problems with the provider affected VPT or sonar systems.

NAVSEA does not name the supplier, although sources said it was a subcontractor from Newport News.

“The fleet hides the name of the company until the investigation is completed,” said NAVSEA spokesman Lt. Kurt Larson. “The supplier in question supplied the components for the Virginia class ships, although not to the same extent as North Dakota,” he added. The components delivered to the ships already in service have passed the initial testing, and the fleet does not have any problems with them today. ”

Larson said a routine check of the assembled components on a North Dakota submarine revealed problems with the supplier’s quality control, and subsequent checks revealed additional problems. As a result, a “careful inspection of all components from this supplier” is conducted. A lot of work to be done.

“Testing these parts and systems does not mean that the problems are in them,” Larson cautioned.

“To ensure the safety of its crews and ships, the Navy will ensure that all components from this supplier meet the specifications,” he said.

Larson could not name the date when the problems were discovered, he was not able to comment on the estimated costs.

“This issue is still under consideration and therefore it is premature to discuss costs,” he said.

Sources said that problems with the supplier were resolved, although it is not clear now whether this supplier will remain in the contract. According to the same sources: “Since the number of suppliers approved for the manufacture of components for a submarine program is limited, some other options will be difficult to achieve.”

The fleet is also thinking about changes in the design and installation of the VPT, although the details are not fully defined. The new nose was made by a company that also manufactured torpedo tubes.

According to the schedule, the submarine was supposed to leave the Groton 14 shipyard in April to conduct initial sea trials, also known as factory trials. At present, it is expected that the vessel will be put into dry dock to check all systems. A new date has not been determined, although neither the fleet nor the shipyards think that it will take too long.

“We still believe that the submarine will be delivered before the August deadline specified in the contract,” a spokesman for EB said.

The following is the complete statement of the NAVSEA Naval Systems Command issued by the Navy SSA 16 on April 2014:

Washington DC - The launch of the North Dakota submarine (SSN 784) will be delayed. This was stated by the US Navy 16 April.

This decision is based on the need for additional refinement and certification of the bow of the submarine and in connection with significant problems with the components already assembled and delivered. Since the fleet is currently working with all interested parties on the certification of the quality and safety of the submarine, as well as on its speedy launch, it will later determine the new commissioning date. The fleet is obliged to ensure the safety of its crews and ships. High quality standards for submarine components are an important part of the overall safety effort.

The lessons learned during the construction of North Dakota are already taken into account in all submarines of the Block III variant.

The team working on the project to create a new submarine oversees all phases of the life cycle: research, development, supply to the fleet, operation and logistics.