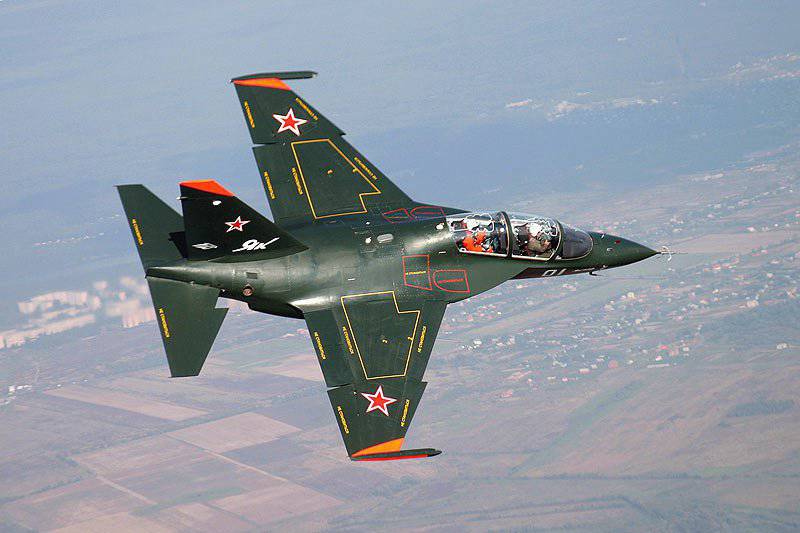 The aircraft Yak-130 crashed during a training flight in the Astrakhan region, the crew commander was killed. Presumably, the accident occurred due to engine failure.

On the evening of April 15 in the Astrakhan region in 25 km southeast of Akhtubinsk during the training flight, not having time to approach the runway, the Yak-130 crashed.

As told to the Interfax-South agency in the regional emergency services, the plane fell about 25 km from the departure point.

“The crash occurred during landing. At a distance of approximately 20 km from the runway, the Yak-130 lost control. The pilots, on command of the flight leader, ejected. One of them died. According to the report of the second pilot, - A source familiar with the situation told Interfax-AVN. He clarified that both pilots are from the Borisoglebsky Training and Research Center for the Air Force.

“A commission has been created to investigate this flight incident, it is now flying to the airfield and will start work soon,” the source said a few hours after the tragedy.

Later it became known that the commander of the training aircraft was killed. The co-pilot is alive, but was seriously injured.

"The lieutenant colonel was killed, the co-pilot - the captain was injured, his condition is assessed by doctors as moderate," the Interfax-South news agency was told in the security forces of the region.

A day after the crash, a source close to the commission investigating this flight incident told the Interfax-AVN news agency that the accident was most likely due to aircraft engine problems.

"The main version of the cause of the crash of the Yak-130 near Akhtubinsk, according to preliminary data, is the failure of the aircraft engine," the agency’s source said.

However, the commission will make public the final conclusions about the cause of the disaster only after the completion of the investigation.

Immediately after the Yak-130 crashed, the leadership of the Russian Air Force decided to stop flights of all aircraft of this type until the causes of the crash were clarified - this practice is common in such cases.

Yak-130 began to develop at the beginning of 1990's. In 1996, the aircraft made the first flight, and in 2002, it was chosen as the basic aircraft of the Air Force for training pilots. It is the main component of the training complex of the Air Force of Russia, which includes an integrated system of objective control, training computer classes, flight training and specialized simulators.

Yak-130 is designed both for training and combat training of flight personnel, and for combat use in simple and complex meteorological conditions for air and ground targets. The total combat load on nine external suspension nodes can reach 3 tons. The crew of the training aircraft consists of two people.

The flight-technical and maneuverability characteristics of the Yak-130 are close to those of modern fighters at subsonic flight speeds. The plane allows at the modern level to solve the problem of training pilots of Russian and foreign combat aircraft of the generation "4 +" and "5".

Serial production of this type of aircraft is conducted by Irkutsk aviation plant. Currently, the Russian Air Force has 48 Yak-130 aircraft, which are part of the 209th training air base in Borisoglebsk, Voronezh Region.

However, the incident with the Yak-130 - not the first. Before, these planes had already been crashed during training flights. For example, a similar case, but without casualties, occurred in May 2010, near Lipetsk.

Then the plane went to take off on the territory of the 4-th Center for combat training and retraining of flight personnel of the Russian Air Force. However, the car crashed to the ground, both pilots managed to eject, and they became alive.

For the investigation of the accident created a special commission. Then, arguing about the cause of the accident before all the circumstances were clarified, the experts called two versions - equipment failure and pilot error. Then the experts said that the engines of the fallen plane were intact, and the Yak-130 crashed near Lipetsk, presumably due to a failure of the control system.

The investigation of the four-year-old case took almost three months. In August 2010 of the year, then-in-Chief of the Air Force, Colonel-General Alexander Zelin, reported that the Yak-130 had weak technical positions.

“The investigation has been completed. As soon as we receive an opinion on it, we will carry out all the necessary measures related to the further development of this aircraft. I think that there are organizational and technical issues in this direction, with the latter prevailing,” he said. "technical issues are mainly related to the preparation of equipment on earth", and "the human factor is not excluded."

At the same time, the former commander-in-chief of the Air Force called the Yak-130 "a very successful aircraft." “The flight and management team applauded the appearance of this car,” he added.

This year, a few days before the incident near Akhtubinsky, the commander-in-chief of the Air Force of Russia, Lieutenant-General Viktor Bondarev told reporters that the Air Force is waiting for more YN-16 training aircraft.

“We are getting the Yak-130 at a tremendous pace and this year we are still getting 16 airplanes for training. We have what to train and who,” he said.

The general stressed that the Russian Air Force is carrying out "tremendous work" to popularize the flight business. According to him, the last three years, this was somewhat hampered by the lack of recruitment of cadets in flight schools. However, since last year, the situation began to improve.

“I think we’ll remove the problem this year. Compared to last year, there are already three times more applications to flight schools, and there is still time for submitting documents,” said Viktor Bondarev.

Meanwhile, the 16 of April in the Moscow region of Alabino hosted the first training of military aviation, which this year will take part in the May Victory Parade 9. All the alleged flight equipment took part in the rehearsal, with the exception of four Yak-130: they were still not allowed to fly until the cause of the accident was ascertained. Perhaps due to the recent catastrophe, the Yakovlev attack aircraft in the 2014 year will not be able to take part in the Moscow parade in honor of the May 9.