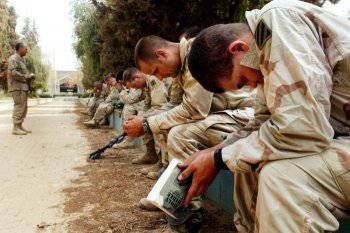 The events that unfolded around Libya and the statements made last week by the governments of France, the United Kingdom and Italy about the direction of land forces in the North African country were a vivid example of the fact that история wars repeated. In their quest to help the people of Libya in overthrowing the dictator Muammar Gaddafi, the coalition countries are on the path trodden by the US and allies in Vietnam, El Salvador, Croatia, Rwanda, Afghanistan.

The development of the so-called institute of "military consultants" over the past 50 years has gone beyond the framework of ordinary consultations and has grown into a kind of justification for the occupation. The United States and its military allies use a political stunt with sending their consultants to a certain country in order to conduct military operations and establish control over the territories of states. In order to understand how the transition from ordinary consultations to large-scale and bloody wars occurs, it is necessary to recall the story.

First on the list is Vietnam. It was this Asian state in 1975, the year that US troops entered. It all started quite peacefully, and the main goal — the 50 direction of the American consulting officers in 750-s did not foreshadow a war that split the USA into two camps and resulted in the death of 55 of thousands of American servicemen. The consultants were sent by President Eisenhower to conduct theoretical training for the army of the government of Ngo Dinh Siem, which opposed the growing communist movement.

The communist uprising in North Vietnam gradually spread over the entire territory of the state, and the US government decided to increase the number of consultants. So, by December 1961, 3200 advisers were already in Vietnam. John Kennedy’s administration understood the gravity of the situation, and already in 1963, the number of military advisers increased to 16 thousands. In fact, it was already a full-scale occupation of the country. The consultants took part in the hostilities, despite assurances from the American leadership that their officers were only conducting theoretical training for the Vietnamese armed forces.

The introduction of the US Army into Vietnam took place after the secret operation in the Gulf of Tonkin, which had been failed by the Americans. It was then that the army of North Vietnam proved its strength and failure of the army of South Vietnam. The administration of President Johnson demanded that Congress approve permission for the commencement of full-scale hostilities in Vietnam.

The next country that suffered from the American consultations was El Salvador. In the 1979 year, when America had not really recovered from its participation in the Vietnam War, in El Salvador, the communist Sandinist rebels practically overthrew the government of the closest US ally in Latin America. President Jimmy Carter sent his military advisers to support the government troops of El Salvador, but President Ronald Reagan made the decision to invest in this military mission, which, after coming to power in 1980, declared that it was vital for the US front in opposition to the Soviet Union.

The US Congress, remembering all the troubles of the war with Vietnam, stubbornly refused to make a decision on sending military units to El Salvador for a long time, and only in the early spring of 1981 did the congressmen make concessions and allowed the President’s administration to send 55 consultants to the country. The decision stated that consultants are prohibited from participating in combat operations.

The Balkan wars that broke out in Europe in the nineties proved the fact that military consultants should not be the official representatives of the countries they serve. Despite the fact that UN Resolution No. 713 outlawed the provision of military assistance to each of the participants in the Balkan conflict, Washington also sent the Croatian armed forces for advice to a private company, Military Professional Resources Inc., which at that time was proud of its “largest the world meeting of joint military experience. " MPRI quickly signed two contracts. The first was for counseling, the second was for military training of the Croatian army, and a team consisting of retired officers of the US Army was sent to the area for a short time.

But the consultations were only a cover for the true nature of MPRI's activities in Croatia, which is still hotly debated to this day. The official job of the company was to advise on the importance of the army in a modern democratic society. However, after some time, Croatian troops launched a series of brutal attacks against civilians and the Serbian military. The most famous was the military operation "Tempest", during which more than 170 thousand people were expelled from their homes. Analysts argue that the ill-trained Croatian army would not have been able to carry out such a well-coordinated operation without the help of MPRI, with joint air force, artillery strikes and a swift infantry attack. In July 1995, the United States officially sided with the Bosniaks and Croats in their fight against Serbian aggression by organizing a campaign aviation bombing by NATO forces, which led to the end of hostilities.

Consultative preludes to large-scale military actions are carried out not only by Americans, but also by other countries that are members of NATO. In accordance with the data obtained during the investigation conducted by the Government of Rwanda in 2008, the French advisers were implicated in the genocide that was carried out in 1994 by the Hutu ethnic group in its struggle against the Tutsi ethno-social minority in 1960. France has been in the 1990-ies with open military support to the Hutu francophone regime. In the 1994 year, when the rebel forces of English-speaking Tutsis, with the support of Uganda, rose to revolutionary insurrection, France dispatched combat units to defend the puppet government of Hutus. According to numerous reports, throughout the entire period of the civil war, French permanent military personnel were attached to key units of the Rwandan army — French advisers remained in their posts even when they killed the President of the State Juvenal Habyarimana in April 800, which caused the brutal massacre of the government-supported and allies of the armed forces of the Hutu with the Tutsi minority. Over the course of three months, more than XNUMX thousands of Tutsis and their Hutus supporting them were killed.

The latest example is how the situation developed in Afghanistan. By organizing Enduring Freedom in September 2001, after the terrorist attack on the US in 11, the purpose of which was to overthrow the Taliban regime and its allies from al Qaeda, Washington decided that the first step was to send military advisers to the country. The main task of the consultants was to assist the Northern Alliance anti-Taliban movement operating in the country. A team of CIA operatives and army intelligence officers arrived in Afghanistan at the end of September 2001. This was followed by large-scale aerial bombardments in support of the "Northern Alliance" in its confrontation with the military forces of the Taliban. Today, ten years later, there are US military units of more than 98 thousand people in Afghanistan. And it all began quite modestly: with a dozen military consultants.

The story continues, and its new round - Libya. Despite NATO’s assertions that the decision to send ground units to the state’s territory is, above all, the provision of advisory assistance and the protection of humanitarian supplies, we must take into account how events developed in the past: it can be said with confidence that this is the first step towards a large-scale armed conflict .
Ctrl Enter
Noticed oshЫbku Highlight text and press. Ctrl + Enter
Military Reviewin Yandex News
Military Reviewin Yandex Zen
1 comment
Ad