The history of artillery ammunition

18 May 2013
11
History Artillery originates long before the Chinese invention of gunpowder. The projectile as the main means of defeating the enemy in its development and improvement has come a long way from ordinary stone to a complex device, which has tremendous destructive power and strength. The improvement of projectiles and other ammunition occurs continuously. The first person to use as projectiles for hunting and protection were stones, bones and sticks. To defeat the enemy at a greater distance, man invented the first in the history of weapons throwing weapon - sling. A sling is a rope or belt loop attached to a stick into which an ordinary stone was inserted. The throwing distance of the stone with the sling reached 200 steps, and in the case of a successful hit, the enemy received a strong blow. Smooth oval or round stones served as shells. Over time, the shells improved, they began to be made from baked clay, lead, bronze and iron.

The revolution in the development and improvement of ammunition caused the invention of gunpowder. Initially, gunpowder, invented in the 7 century by Chinese sages, was used as an incendiary composition. In order to increase the damaging potential of the incendiary mixture, various toxic substances were mixed in it. At the beginning, powder bombs were thrown by means of ordinary throwing machines, a fuse was provided in these bombs, and for the most part they had a psychological impact on the enemy because of a loud sound during a break. Somewhat later, in the 12 century, the Chinese were able to make the first bomb. The hull of a new bomb consisted of iron, and with an explosion set inside the gunpowder, a huge number of fragments hit the enemy.

Artillery gun is practically the same throwing machine, only significantly improved and capable of throwing projectiles at the enemy. The cannon ensures that the projectile is thrown in the desired direction. Pledged warhead informs the main projectile of the required speed, which provides the specified range. An old cannon for firing was charged with powder powder, which served as a warhead, and the core. In Russia, firearms first appeared in the middle of the 14 century. In service with the Russian rati were guns, mattresses and food, which were in service for a period of three centuries, starting with the 1382 year. Stone and later lead and iron cores were used as projectiles for piscals and cannons. In smooth-bore artillery, it was assumed that the spherical shape of a cannon shell allows you to get the maximum range and accuracy. The nuclei hit the target only with the force of their strike, taking into account the direct hit. It was necessary in the destruction of fortifications. Cast cannonballs from cast iron began in the 1470 year, which greatly simplified the design of the gun, as well as lengthened the barrel and reduced the caliber. The cast iron cores eventually replaced the cores that were made from other materials, they remained in service, without significant changes, until the middle of the 19 century. 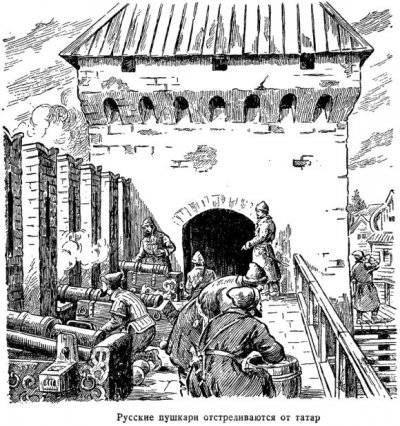 In the middle of the 15 century, howitzers were invented, and an explosive projectile was created specifically for these guns. Such shells were divided into grenades and bombs, depending on their weight. For example, a projectile weighing more than 1 pounds was considered a bomb, and less it was already a grenade. Bombs and grenades were intended for firing at targets located in open space and at defensive installations. As a result of the rupture of such a projectile formed more than twenty fragments. A special effect was achieved when firing at the enemy's guns. But there were also disadvantages: almost every fifth projectile was not torn due to the imperfection of the incendiary tubes. Grenades and bombs continued to be in service with all armies for more than three centuries. Howitzers had a short barrel (for arm length). This was done with the intention that the loader could safely lay a explosive projectile. Until the end of the 15 century, in order to execute a shot from a cannon, it was necessary to measure the correct amount of gunpowder and enter it into the bore with a copper scoop. Then close with a wad and tamped it, and only after that the shell was put in and delivered by the cleaning man, gunpowder was poured into the seed hole and ignited with the help of a wick - a shot occurred. In the 16 century, an artillery shell with a grape shot was widespread. Initially, the canister was made of specially chopped lead, later, to improve the aerodynamic properties, pieces of lead were rolled around, and after some time, round gun bullets of 13-23 mm caliber were used to make a canister.

To increase the effectiveness of explosive shells in the 17 century, a grenade was made with a tube, it was intended for artillery firing at openly located enemy units from large-caliber mortars at a distance of 350-450 meters. During the warfare of World War 1, the canister used in the grenades was used as a model for creating shrapnel for shooting at aircraft, and later cluster munitions were created based on the canister.

In the 18 century, an incendiary projectile was put into service; it differed from the usual bomb in that it was equipped with a special incendiary substance and had 3-5 holes.

The new era in the development of artillery demanded the invention of completely new artillery shells for new guns. In 1728, academician I.G. Leitman substantiated theoretical issues related to the creation of rifled guns and conical projectiles to them. In 1872-1877, the artillery officer of the Russian army V.S. Baranovsky created the first rapid-fire cannon - an 2,5 caliber cannon with an anti-recoil device. For accelerated loading, Baranovsky proposed to use the loading of the gun with a unitary cartridge, which is made of a sleeve and a projectile, connected into one whole. The unitary cartridge, in combination with the high-speed piston lock, simplified and significantly accelerated the loading of the gun. The following were used ammunition: high-explosive and high-explosive grenades, steel shrapnel. Ammunition - 140 shells. 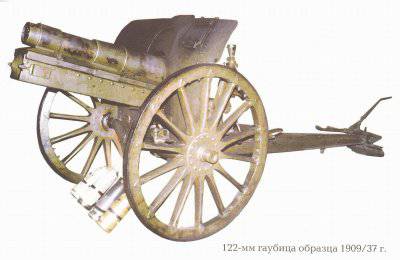 The main artillery shell in the years of the First World War was a high-explosive grenade, filled with explosives - melin and trotyl. To explode the shells used shock-tube and shock tubes. The first months of the war proved that the light cannon, which forms the basis of the artillery weapons of the states receiving the war, is powerless against well-concealed targets and even light temporary structures. In the 1 World War I, such munitions were used — chemical, high-explosive, shrapnel, incendiary, lighting, and communication shells.

Communication shells were used to listen to conversations in the enemy’s camp or to deliver urgent and necessary messages over long distances. In 1913, new metal sleeves were introduced for howitzer charges. With the adoption of the shells with a metal sleeve, it became possible to use chemical toxic substances as a charge. For the first time on October 27 1914, Germany used chemical artillery shells equipped with shrapnel mixed with irritating powder.

The first armor-piercing projectile according to the method of the scientist D.K. Chernov, having special tips S.O. Makarov, made of viscous steel, was created in Russia. At first, shells were made of cast iron, then armor-piercing shells began to be made from special pudding steel. With test firing in 1897, a new armored-piercing projectile with a tip, launched from the 152 mm gun, broke through an armor plate exposed as a target with a thickness of 254 mm.

In order to accomplish the assigned combat missions, artillery must conduct accurate and most importantly powerful fire at targets — open, sheltered, mobile and stationary, unprotected and protected by armor and concrete. Therefore, in order to achieve the maximum effect of defeating various targets, it is necessary to use projectiles of various destructive effects. Mines and projectiles with a caliber less than 76 mm refer to a small caliber, with a caliber from 76 to 152 mm refer to a medium caliber, and with a caliber larger than 152 mm to large. 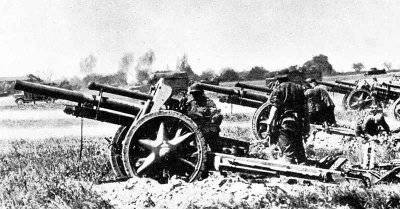 Armor-piercing caliber shells lead to breaks, punctures, knock-out of cork armor, breakdowns and shifts in armor plates, jamming of towers and hatches, etc. The striking effect behind the armor is produced by fragments of the projectile and armor. The action of the armor-piercing sub-caliber projectiles is accompanied by the destruction of armor, and when the core leaves the pierced armor, with a sharp removal of the created tension, the core is destroyed into hundreds of fragments.

As a result of the action of the cumulative projectile, armor makes its way through and a damaging effect occurs behind the armor. Armor penetration is achieved by the directed action of the explosive energy of a bursting charge.

In the 30s, the Red Army adopted completely new high-explosive fragmentation shells of a special long-range form, concrete-piercing and armor-piercing shells. These include fragmentation and armor-piercing shells for 45-mm anti-tank guns, solid-shell 76 mm high-explosive shells, 152 mm howitzer shells made of cast iron. The fuses RGM, MD-5, KTM-1, KTM-2, KTD, remote tube D-1, T-3-UG were developed for these shells. During the second world war to deal with heavy tanks A new class of ammunition was designed and adopted - cumulative and sub-caliber shells. Caliber shells were adopted - 45 mm in 1942, 76 mm in 1943. In February 1944, an 85-mm sub-caliber projectile was adopted, which significantly increased the level of anti-tank fire. In 1941, the M-132 rocket launcher was adopted for service, on the guides of which up to 16 rockets of the caliber of 132 mm were located, the firing range was 8470 m. The people got the name Katyusha.

Modern artillery is armed with projectiles capable of piercing concrete walls up to two meters thick from a distance of more than 10 thousand meters. Given the importance of artillery in solving combat missions, many countries around the world are developing not only new weapon systems, but also ammunition, giving them superpower.
Ctrl Enter
Noticed oshЫbku Highlight text and press. Ctrl + Enter
We are
Overview of artillery. Part of 6. AmmunitionOverview of artillery. Weapon systems, ammunition, target detection and positioning devices
Military Reviewin Yandex News
Military Reviewin Google News
11 comments
Information
Dear reader, to leave comments on the publication, you must to register.