From on-board equipment to space shaver 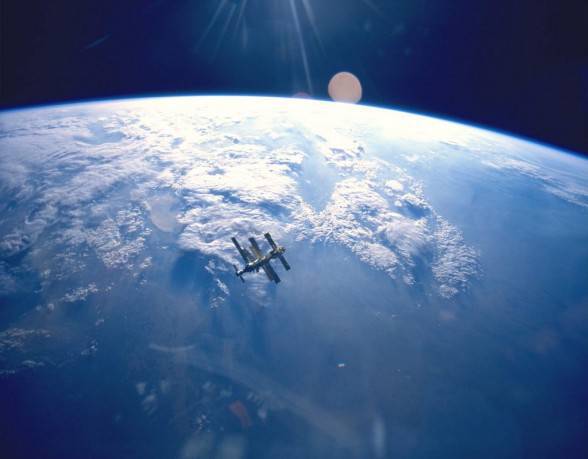 KRET enterprises took an active part in space exploration. Products developed by Concern's specialists can be found on all spacecraft and stations, from Vostok-1 to the ISS. On the simulators created at the KRET enterprise, Yuri Gagarin prepared for flight. Not one generation of Soviet cosmonauts used a unique development - the space electric razor.

Artificial satellites, devices for the study of the Moon, Mars, Venus and Halley's comet, as well as spacecraft and stations are almost entirely equipped with wires and cables created in the Cable Industry Bureau (OKB KP).

At the Mir station, almost the entire onboard cable network was made of OKB KP products. For all the time the station was in operation, there was not a single fault on its board due to cables. Their resource was not exhausted even by the time of the station flooding.

Today, the cable network of the Russian modules of the MKS for 95% consists of the company's products. The four-pair symmetrical heat-resistant cable, developed by the Design Bureau, is one of the main elements of the ISS information network. It is used to connect and American computers and equipment.

Special load-carrying control cables were also created at the enterprise. Thanks to one of them, the USSR pilot-cosmonaut Alexei Leonov made the first man in the world to go into outer space. 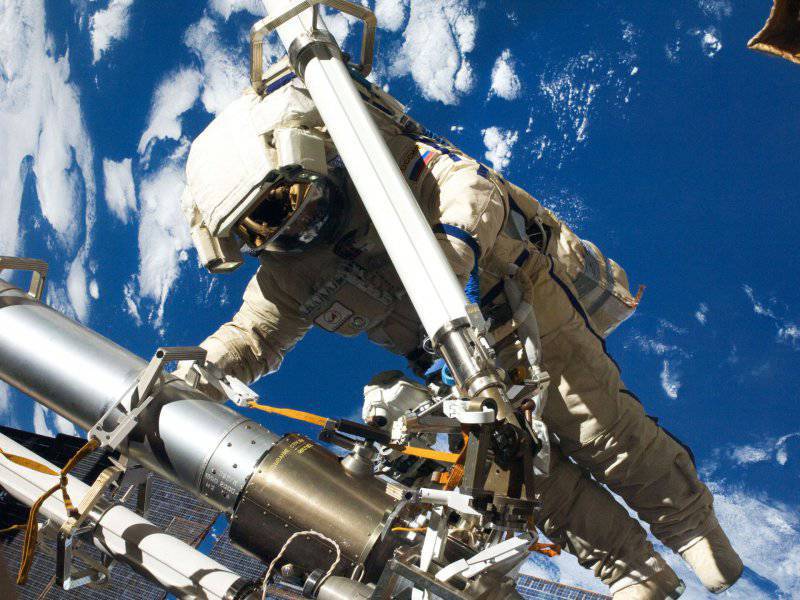 The Scientific Research Institute of Aviation Equipment (NIIAO), which is a member of KRET, is the head enterprise for the creation of simulators for cosmonaut training.

The institute's specialists developed more than 20 simulators for all manned spacecraft from the “East” to the “Buran” and the “Soyuz TMA”. A simulator was created exactly at NIIAO to prepare for the flight of Yuri Gagarin.

The primer of the Research Institute of Aerosoids of Russia has been recognized as a simulator based on the centrifuge TsF-18, which is still one of the main means of training astronauts. The scale of the ZF-18, the only centrifuge in the world in terms of its parameters, is truly amazing: the rotation radius is 18 meters, the total mass of rotating parts 305 tons, the power of the main engine is about 27 megawatts.

Today, modern simulators from scientific research institutes are being commissioned to prepare crews for flights on Soyuz-TMA ships with the latest computer systems and the ability to provide excellent visualization. 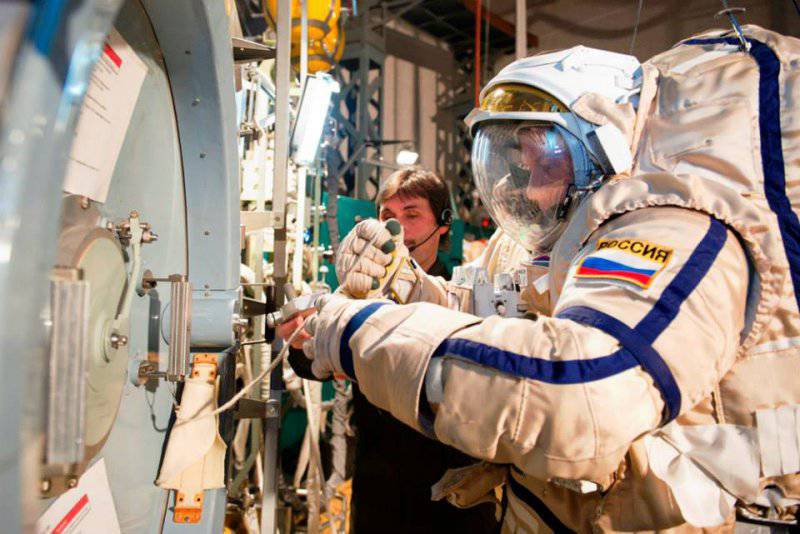 In 1971, the specialists of the Ufa Instrument-Making Production Association (UPPO) received a special order for the creation of the first electric shaver for astronauts.

A regular razor in space was not suitable, since there is no industrial network in 220В, and besides, in the absence of gravity, the hairs will fly throughout the ship.

As a result of numerous agreements with the designers of the spacecraft, the electric shaver “Agidel-K” appeared. In addition to the power supply from the onboard network 27В, it was equipped with a built-in micro vacuum cleaner.

Models have successfully passed space tests. The first to appreciate the quality of the electric shaver were the Soviet cosmonauts Pavel Popovich and Yuri Artyukhin and voiced it to the whole world directly from the spacecraft. Later more than one generation of Soviet cosmonauts thanked the Ufa electric razor. Until now, the space shaver is a unique development, which has no analogues in the world.

KRET enterprises successfully participated in the development and production of on-board equipment for domestic spacecraft of the Vostok, Soyuz, lunar orbital spacecraft, Mir orbital stations and the ISS, the Progress cargo spacecraft.

Above the equipment for the Vostok-1 spacecraft, on which Yuri Gagarin made the first space flight in the world, specialists of many Concern enterprises worked.

NIIAO specialists have developed equipment for the first spacecraft: information display systems and manual controls. Another enterprise that is included in the Concern today, AVEKS, has created a fuel consumption control system for the rocket, with the help of which the Vostok-1 was launched. 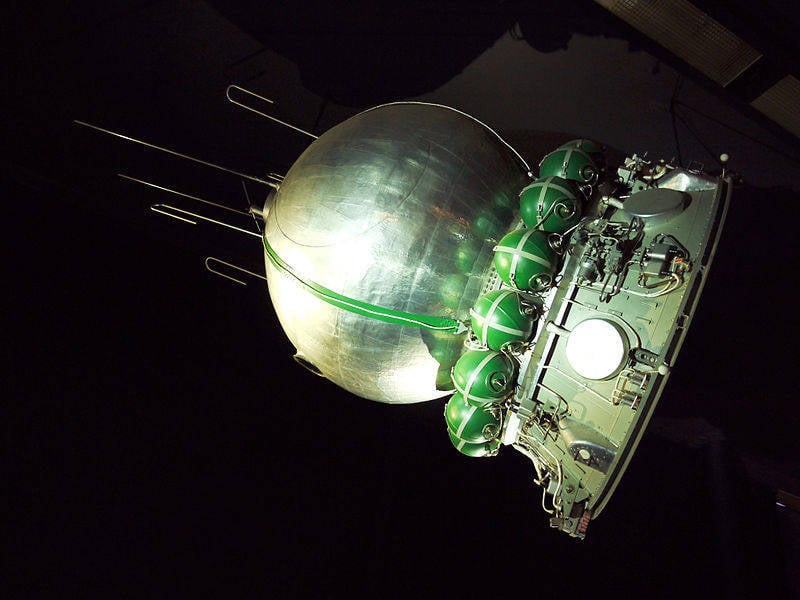 Today, the Ufa enterprise manufactures controls for the onboard complex of transport ships, and also participates in the modernization of the Russian segment of the ISS station and the deployment of a multi-purpose laboratory module (MLM).

One of the latest space achievements of the Concern can be called the Neptun-ME control system for the Soyuz-TMA series developed by the Institute of Aviation Equipment.

The system is able to control and efficiently control the onboard systems of a manned spacecraft. Neptun-ME is a control panel with three processors and two matrix liquid crystal screens.

The new system has already been successfully tested - the Soyuz-TMA manned spacecraft No. XXUMX, equipped with the Neptun-ME, was successfully launched last May. 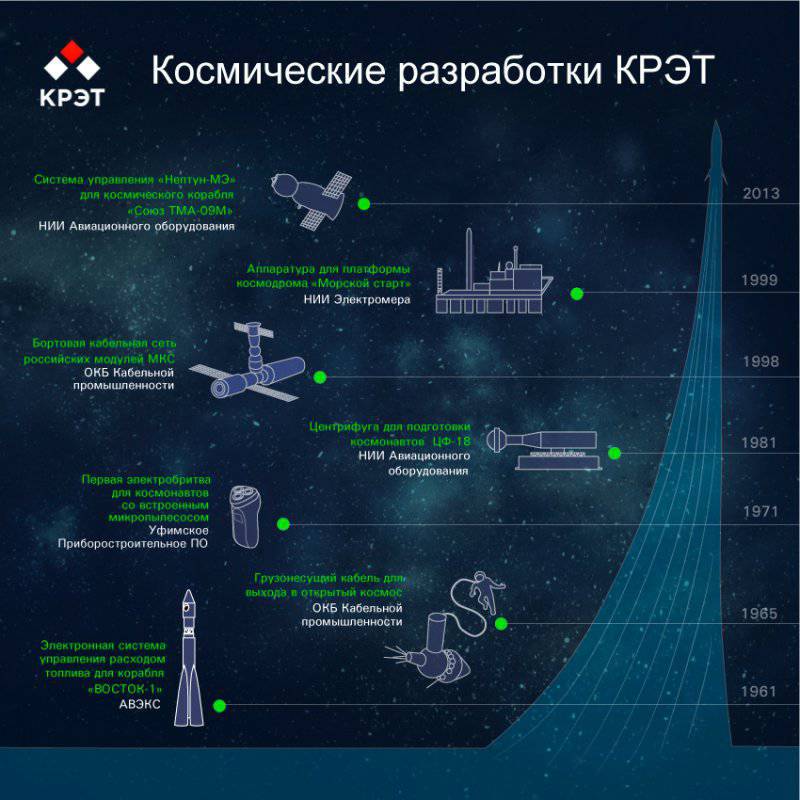 The development of competitive space technology requires a transition to new types of batteries. One of the leading Russian developers of modern lithium-ion batteries for spacecraft is OJSC "Aviation Electronics and Communication Systems ”(AVEKS), a member of KRET.

The characteristics of such batteries are much higher compared to other types of batteries with a similar service life and the number of charge-discharge cycles. But still the main advantage of these batteries is the reduction in weight compared to traditional batteries.

According to expert estimates, the use of lithium-ion batteries on telecommunications satellites 15-20 kW will reduce the mass of batteries by 300 kg. This will significantly reduce financial costs, given that the cost of putting a useful mass into 1 orbit is about 30 thousand dollars.

Ctrl Enter
Noticed oshЫbku Highlight text and press. Ctrl + Enter
We are
History of space exploration. 1984 year - launch of the interplanetary station "Vega-1"Cosmonautics has a limitless future, and its prospects are endless, like the Universe itself (S. P. Korolev)
Military Reviewin Yandex News
Military Reviewin Google News
4 comments
Information
Dear reader, to leave comments on the publication, you must sign in.