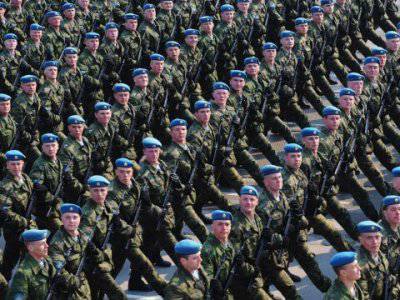 
At the Gaidar Institute for Economic Policy they decided to conduct their own calculation of the funds that the Russian Federation spends on the defense industry. For this was chosen a very original technique. When calculating defense expenditures, the specialists of the Gaidar Institute decided to include in the “formula”, for example, such parameters as pensions paid to military retirees, state guarantees to defense enterprises and some sums that are included in the expenditure budget under the “secret” or “top secret” heading. In addition, the economic specialists of the above-mentioned institute somehow miraculously managed to count that in a couple of years (that is, by 2016) exactly a quarter of the expenditure “pie” of the Russian budget would make the state inaccessible to controlling instances, namely transferring it to secret or top-secret status in order to increase expenditures, including for the defense industry. Such calculations are based, it turns out, on the dynamics of growth of secret expenditures in the Russian budget.

These economic calculations, along with peculiar forecasts, to the same Gaidar Institute suggested that this year Russia will be able, attention! - To overtake in terms of defense spending the United States of America ... But only here it is added that the "overtaking" will occur in relative numbers, and not in absolute ones. And in these relative figures, the United States, as reported by the institute, spends 4,4% of GDP on defense, and Russia "will spend" all 5% of GDP.

Such original economic and mathematical speculations by representatives of the Gaidar Institute were immediately picked up by certain Russian and not only Russian publications. "Independent newspaper" came out with the killer headline "Russia is ahead of the US in terms of defense spending." And since statistics show that up to half of all people who get acquainted with the news and with analytical materials on the Internet, they pay attention exclusively to headlines, one can hardly doubt the slaughter for the “interested” reader and the article itself. That the “calculations” of the “Gaidarites”, that the heading “NG” is a real thunder in the blue, especially for those people who have recently been doing that inspire the idea of ​​Russia's overt militarism. These are both internal “disagreements” (and with what only these “disagreements” in Russia agree ...), and foreign information, excuse me, meat - people who are used by certain media to promote this or that idea.

The idea is as old as the attitude of the West towards Russia. And this idea lies in the fact that Russia is trying not only to start a new arms race, but that it even wins this race ... At the same time, it wins by collecting "the last crumbs" from its own population, picking it (the population) to the skin. Like, take a look, even the United States remained in second place ...

And what an excellent “seed” this is, for example, for the American defense department! Indeed, in the USA, recently, at the highest level, there has often been talk about the time to save on the defense industry. Now the Pentagon will be able to "rely" on the results of "research" of the Gaidar Institute to declare the need to urgently conduct an increase in defense spending in the United States, otherwise "the Russian military will wash their tracks tanks in the Mississippi. " Like, we are cutting consumables here, and the Russians are using it. So the Russians should not be allowed to do this, and again print more “bucks” in order to invest them in their national defense! Do you speak a national debt? But the defense of the most democratic and humane country in the world is more important!

Considering the fact that a lot of impressionable elderly gentlemen are sitting in Congress, these gentlemen may well respond to such appeals. And then, as if by thumb: new conversations about the need to surround Russia with missile defense systems, new threats of sanctions (military, economic, political) and stuff like that.

Of course, no one is going to argue with the fact that the level of defense spending in Russia has recently increased significantly. In principle, this was not a secret to anyone, since a few years ago the authorities announced the re-equipment and general modernization of the Russian army to the amount up to 23 trillion rubles in the period up to 2020. This amount also includes the costs envisaged for the modernization of enterprises of the military-industrial complex. But to link defense spending, for example, with payments of military pensions - this is too much. Why then did the same Gaidar Institute not take into account similar expenses in the American economy? Indeed, in the case of the United States, it is quite possible to include in the expenditure item on defense (or more precisely on aggression) such parameters as “content of non-governmental organizations in different countries of the world”, “financing puppet opposition forces abroad”, “cloudless work of the NSA with telecom operators” , “Financing of controlled mass media in the territory of other states”. If all these points, and of course payments to American military retirees, were taken into account by the Gaidar Economic Institute, then the US expenditures on the reports would not be 4,4% of GDP declared for several years in a row, but a clearly double-digit value.

Ctrl Enter
Noticed oshЫbku Highlight text and press. Ctrl + Enter
We are
Five consequences of rearmamentRussia will be ranked third in the world in defense spending
Military Reviewin Yandex News
Military Reviewin Google News
72 comments
Information
Dear reader, to leave comments on the publication, you must sign in.