March 17 2014
42
On the night of Friday, 14, March 2014, was held the first in stories mass landing of landing troops and military equipment in the Arctic. The airborne battalion from the 98th Ivanovo airborne division of 350 people took part in the landing. The battalion landed at 3:30 in the morning at the Temp site, which is located on the Arctic island of Kotelny. This island is part of the Novosibirsk Islands archipelago. Temp airdrome has become the strategic point of Russia's presence in the Arctic. It was reopened on October 29, 2013 (since 1993 the airfield has been mothballed and abandoned); at present, the airfield allows receiving military transport aircraft aviation.


Approximately 15 minutes before the landing of the paratrooper battalion on the Temp landing base on parachute platforms, 4 units of military equipment, as well as about 40 tons of various cargo, military equipment and materiel were parachuted. When landing, the personnel of the battalion used "Crossbows" - guided parachute systems for special purposes. After their landing, the paratrooper warriors moored the military equipment and cargo. According to the legend of the exercises, during the landing of the assault, mobile groups of the conditional enemy attempted to prevent the landing, using snowmobiles and paragliders. In order to take control of the airfield, the paratroopers needed just 40 minutes. The spokesman for the airborne troops, Lieutenant Colonel Evgeny Meshkov, told reporters about this. In less than an hour after the landing, the unit of the 98 Airborne Division was ready to receive military transport aircraft with heavy equipment and armament at the Temp airport.

Experts note that the exercises on the island were held at an abnormally low air temperature, so the fighters were provided with three hot meals a day. Yevgeny Meshkov said that the paratroopers were provided with high-calorie hot meals in a field camp at Tiksi airfield, which was defeated near the mouth of the Lena River, as well as at the Temp site. Here, the paratroopers launched a high-passable field kitchen at the base of the vehicle. Small groups of paratroopers, who carried out their tasks in isolation from the main forces of the battalion, were given special kitchen sets. The paratroopers were given 2 hot meals and hot tea 3 once a day. 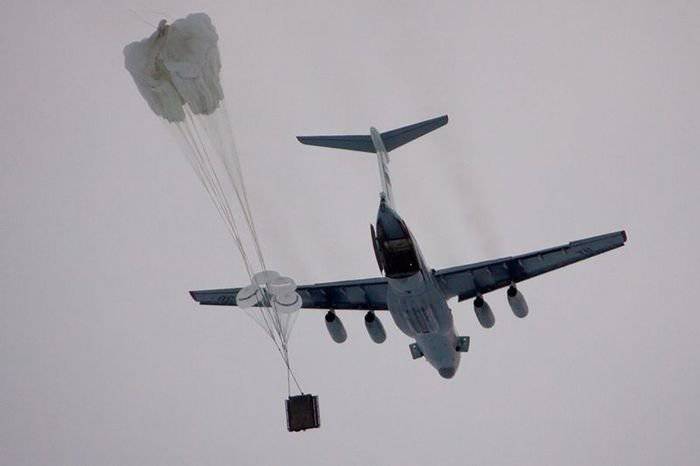 Field kitchens paratroopers warmed up using thermal units that run on liquid fuel. In addition, if necessary, it was possible to use solid fuel. The use of fuel was enough to warm up the boilers for cooking and maintain the required temperature during the distribution of food to paratroopers. Those paratroopers who were put on guard and entered into the composition of patrols, hot food was delivered in special thermoses. In addition, all the paratroopers received doppake - sandwiches with sausage and bacon, chocolate, fruit compote and other sweets.

According to Colonel-General Vladimir Shamanov, Commander of the Airborne Forces of Russia, exercises of a similar scale in the Arctic have not been conducted not only in Russia, but also in other countries of the world. According to the general, the decision to drop was made at the very last minute. The reason for this was the extremely difficult weather conditions at the time of landing. Shamanov told reporters that during landing from aircraft the permissible wind speed at height should not exceed 12 m / s and that on the ground - 10 m / s, while at the time of landing at the ground the wind speed reached 12-14 m / s , and at height - more than 15 m / s. Shamanov noted that the country can be proud of its landing troops, which are able to solve the tasks assigned to them in all weather conditions. He noted that under such weather conditions, no one in the world, except Russians, jumps with a parachute, and stressed that in terms of jump training, we still maintain leading positions throughout the world.

Arkady Bakhin, who holds the post of first deputy minister of defense of the country, was satisfied with the actions of the landing troops in the Arctic. He promised that in the 2014 year, our army will be engaged in the improvement of its combat infrastructure in this corner of the planet, including along the entire Northern Sea Route. In addition to training combat skills, one of the main tasks of the Russian military in the Arctic is to assist polar explorers and conduct search and rescue operations. According to Arkady Bakhin, in January 2014, the military, who are now stationed on Kotelny Island, have already helped to evacuate a number of meteorological stations at which the engines failed. 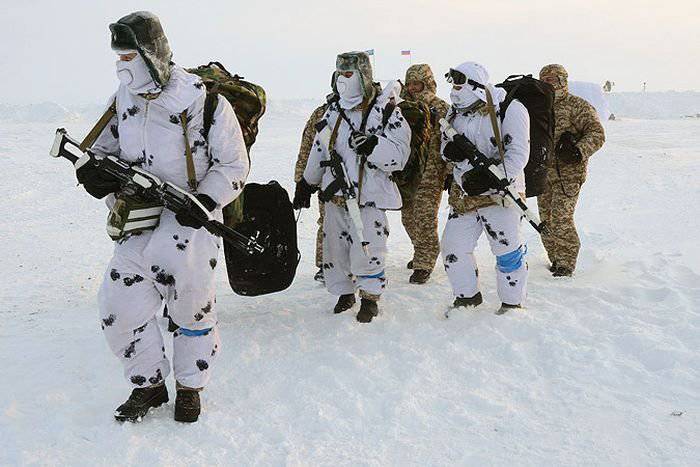 The commander-in-chief of the country's Air Force, Viktor Bondarev, told reporters that a military camp would be built on Boiler Island on 2014. In addition, the Russian Ministry of Defense continues to work on the development of military infrastructure in the northern regions of the country. According to Bondarev, in addition to the exercises of the Airborne Forces, Russian aircraft, using the Tu-4MS 95 aircraft, organized airspace patrols in the Arctic Ocean.

Former Commander-in-Chief of the Airborne Forces, retired Colonel-General Georgy Shpak, also noted the scale of the exercises. He explained to journalists that cases of landing of people on the New Earth or even on the pole took place, but these were always small groups. Now, for the first time in world practice, an entire subunit was parachuted in adverse weather conditions - 350 soldiers and officers.

Telling reporters about the specifics of the exercises, the retired general highlighted a number of key points:
1) Landing took place under conditions of abrupt weather changes. Strong wind and extremely low clouds appeared at the last moment.
2) In this region, it is extremely difficult to navigate the terrain, in fact, this is one big snow desert. Under these conditions, soldiers and officers should not feel very comfortable, because they are accustomed to act in the fields, forest, on the water, but not in the Arctic.
3) According to him, in the Arctic it is necessary to be prepared for problems with radio communications, as magnetic storms often occur in the region.
4) Landing with such a landing does not take place on a convenient ground for landing or a rolling field, but on polynyas, hummocks and divorces. 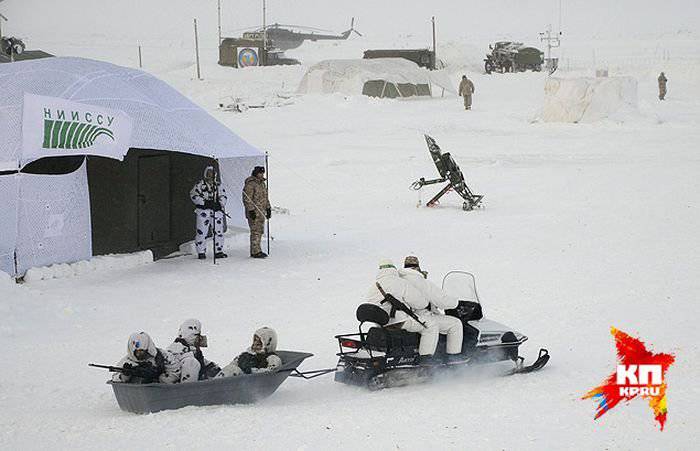 According to George Shpak, in the Russian army in the Airborne Forces the jumping training traditionally was very strong, which no army in the world can boast. This training allows soldiers to parachute into the tillage, and on concrete, and on water, and on ice or snow. Giving a geopolitical assessment of the situation in the Arctic, a retired colonel general told reporters that at the present time hardly anyone will unleash hostilities here and raise a hand on our country. At the same time, he stressed that in the conditions of the modern world, Russia should be ready for anything.

Modern military infrastructure to appear in the Arctic

The need for the appearance of Arctic troops in our country has been actively discussed since the 2009 year. Then it was planned to transfer this region to the FSB, so that by 2016, it would become the “leading strategic resource base of the Russian Federation”. However, in December 2013, the new Russian defense minister, Sergei Shoigu, noted that already in 2014, a group of troops would appear in the Arctic, which would ensure the protection of national interests and the security of Russia in the region.

A week later, Sergei Shoigu ordered the General Staff to prepare draft guidelines for improving the military infrastructure in the Arctic and deploying units of the Russian army here by the end of December. Currently, the restoration of military infrastructure is in full swing. Now Russia is engaged in the restoration of berthing facilities and airfields on the New Siberian Islands and Franz Josef Land. In addition, in the plans of the military reconstruction work on other airfields in the Russian North. Among them are Alykel, Amderma, Anadyr, Nagurskaya, Naryan-Mar, Rogachevo, Tiksi. 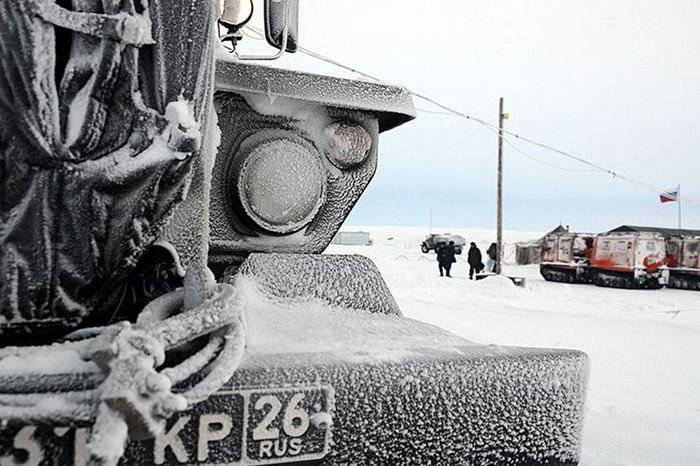 In January, 2014, the President of Russia again spoke about protecting the interests of our country in the Arctic. At a meeting with Vladimir Putin, the vice-premier of the Russian government, Dmitry Rogozin, noted that the military industry is ready to supply the Russian Defense Ministry with all the necessary weapons that can be used in this particular region. Earlier, Rogozin said that the Russian industry is already working on the creation of military equipment, which is able to operate in extreme conditions of the Arctic. The vice-premier, who oversees the issues of defense industry, noted that the Arctic is one of the systemic threats that is subject to constant analysis by specialists of the military-industrial complex.

In February of this year, information appeared that as part of the Russian North fleet a new unit may appear, which will be called the Joint Strategic Command. The General Staff believes that the new unit will take over the protection of Russia's interests in the Arctic region. According to currently available information, the new strategic alliance may receive the status of a military district.

According to preliminary information, the Northern Fleet, which will be removed from the subordination of the Western Military District (ZVO), can enter the full composition of the SF-USC, as well as units withdrawn from ZVO and units of various combat arms and types, which are currently deployed on the North of Russia. The new structure, among other things, will have to include new groupings of troops, which should be deployed in the Arctic, in particular, on the New Siberian Islands, Franz Josef Land, Novaya Zemlya, as well as border guards. The new strategic command will obey the Minister of Defense and the General Staff. Later, it will be managed by the National Defense Management Center being created. 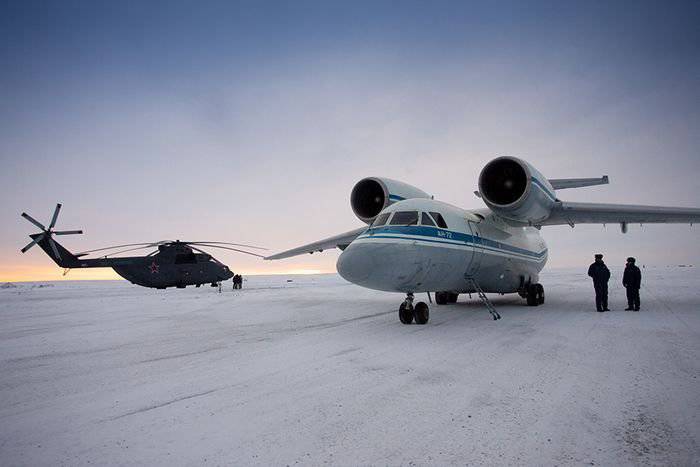 Moscow’s heightened interest in the development of the Arctic frontiers is understandable and understandable. 25% of all unexplored energy resources of the world are located in this region. The Russian Federation was the first of the five Arctic countries back in the 2001 year to announce its intention to expand the borders of the Russian continental shelf. Violent disputes over the control of this territory with the United States, Canada, Norway, Denmark continue to this day.

Not long ago, the US State Department announced the introduction of a new post in the country - a special representative for the Arctic. The diplomat, who will have to deal with the problems of the Arctic region, will have to play a very important role in advancing the interests of the United States in the region, especially taking into account the fact that Washington is chairing the Arctic Council next year.

Ctrl Enter
Noticed oshЫbku Highlight text and press. Ctrl + Enter
We are
What is armed, how equipped and what equipment is in service with Russian paratroopers (photo report)
Military Reviewin Yandex News
Military Reviewin Google News
42 comments
Information
Dear reader, to leave comments on the publication, you must sign in.