US will study the supply of Russian rocket engines

March 17 2014
72
A few weeks ago, there were reports in the press about further cooperation between Russia and the United States in the field of rocket engines. It was reported that American experts are considering various options for the development of such cooperation. The possibility of buying a license for the production of RD-180 engines was seriously considered. Now, the US leadership may reconsider its attitude towards the existing agreement and even refuse to buy Russian rocket engines. 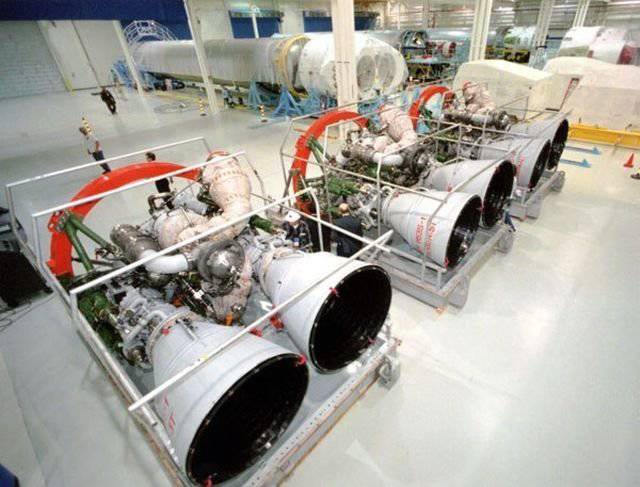 At the recent congressional hearings with the participation of Secretary of Defense Ch. Hagel, various aspects of Russian-American cooperation were considered. To the congressmen’s question about the development of their own production of rocket engines, the Pentagon’s chief responded that this topic requires further careful study. The results of the analysis of the existing agreements are still not completely clear, but one cannot rule out such a development of events in which the deliveries of rocket engines will be terminated on American initiative.

A few days earlier, a statement on the topic of Russian rocket engines was made by US Deputy Secretary of the Air Force E. Fanning. According to the official, the United States has a certain supply of RD-180 engines. With the implementation of existing plans for launches of missiles equipped with these engines, the stock will be enough for this and the next years. In addition, much of the launch vehicles that are to fly in the 2016 year will not remain without engines. At the same time, Fanning noted that the Air Force is following the relations between the two countries and intend to protect the supply of rocket engines.

The Russian RD-180 rocket engines are used on American Atlas V launch vehicles. The United States regularly launches such missiles in order to launch various spacecraft into orbit. To date, Atnas V missiles have already been launched, only one of which ended with the launch of spacecraft to an insufficiently high orbit. The latest launch of the similar rocket was 43 of January of this year.

It should be noted that some payload of Atlas V launch vehicles has long been causing claims by the Russian side. Using these rockets, equipped with Russian-made engines, the United States has repeatedly put into orbit not only commercial, but also military spacecraft. Because of this, Russia has repeatedly warned American partners about a possible break of the existing contract. The last such threats were voiced last summer.

The United States has reason to fear such a development. Atlas V carrier rockets are an important element of the American space program, which is why the termination of their operation due to the absence of engines can seriously hit the entire industry. According to the existing agreement signed in the mid-nineties, Russia will supply RD-180 engines to the 2018 year. In the future, it is possible to sign a new similar agreement.

In connection with the claims of Russia, American experts are forced to look for ways to solve the problem of imported engines. So, in mid-February, it became known that the United States is exploring the possibility of organizing the licensed production of Russian engines in their factories. The main advantage of buying a license was the ability to produce any required number of rocket engines, regardless of the relations between the two countries. At the same time, however, the deployment of licensed production has several drawbacks at once. First of all, it is the difficulty of mastering new technologies used by the Russian industry. Because of this, American-made RD-180 engines can be about one and a half times more expensive than Russian ones.

Buying a license seems to be a sufficiently profitable solution for the United States. Nevertheless, Russia has no reason to meet the Americans. The production of RD-180 engines in accordance with the Russian-American agreement is one of the main revenue items of NPO Energomash. Cessation of the manufacture of these engines will seriously affect the enterprise. Thus, the probability of selling a license is extremely low.

Ch. Hagel at a hearing in the US Congress noted that the issue of the supply of Russian rocket engines requires further consideration and careful analysis. So far it is impossible to speak with certainty about the final decision of American officials, but there is every reason to doubt that they will dare to abandon further purchases of Russian engines. The available supply of the engines supplied is sufficient for use over the next few years, but later on the United States risks being left without an Atlas V launch vehicle. For a long time, the United States has been trying to create its own engine with characteristics at the level of the Russian RD-180, however all these attempts so far not successful. The use of available engines on the Atlas V rocket, in turn, will lead to a noticeable decrease in its performance.

As we see, the situation around Russian rocket engines is very complex and does not allow solving all the issues quickly and with minimal forces. Any serious actions by the parties can make life difficult or even harm them, and the US leadership is well aware of this. Therefore, it is not surprising if the study of the “motor issue” announced by Charles Hagel ends with the fact that US officials decide to continue cooperation with Russia in full compliance with the existing contract.

Ctrl Enter
Noticed oshЫbku Highlight text and press. Ctrl + Enter
We are
Results of the week. "Either true or all is well"News of the Russian-American cooperation in the field of rocket engines
Military Reviewin Yandex News
Military Reviewin Google News
72 comments
Information
Dear reader, to leave comments on the publication, you must sign in.