March 11 2014
54
At the moment, Turkey does not actively intervene in the situation that is unfolding around the Crimea. The Turkish Foreign Ministry consistently declares support for the sovereignty and territorial integrity of Ukraine. The decision to hold in Crimea a referendum on the status of autonomy, which is scheduled for March 16, the Turkish Foreign Ministry called the "wrong and dangerous step." At the same time, demonstrations and rallies are held in Turkey in support of the people close to the Turks - the Crimean Tatars. Similar actions are taking place today in Russia in support of the Russian population of the peninsula.


Currently, representatives of more than 80 nationalities live on the territory of Crimea. The largest communities are Russian, Ukrainian and Crimean-Tatar. Today, about 300 thousands of Crimean Tatars live in Crimea (approximately 15% of the population of the peninsula). The Crimean Tatar ethnos was formed at the turn of the XIV-XV centuries. The name "Crimea" itself is of Turkic origin and means "fortification", "ditch". The Crimean Khanate that emerged on the peninsula almost from the moment of its appearance fell into dependence on the Ottoman Empire. Overwhelmingly, the Crimean Tatars are Sunni Muslims who are under strong Turkish influence, both cultural and political. 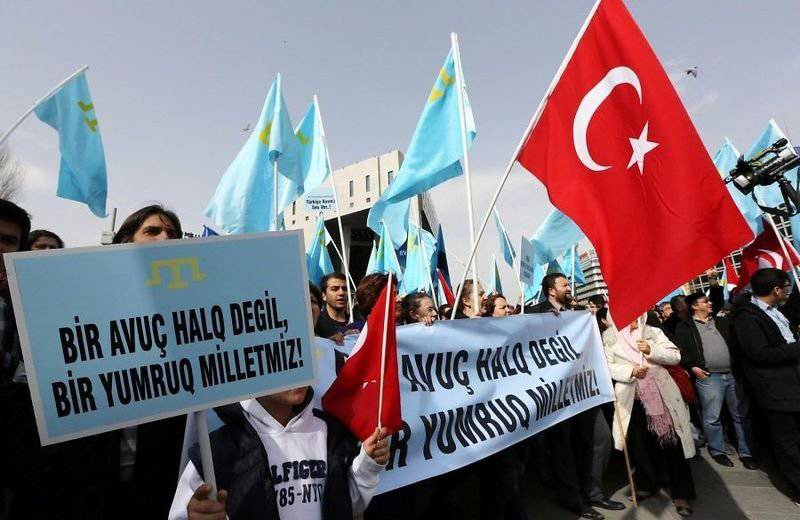 The total number of Turkish armed forces is over 700 thousand people, the sixth place in the world in terms of numbers. Only the USA has a larger army in the NATO bloc. The Turkish army is not a contract, it is formed on a conscription basis. From 1 January 2014, the period of compulsory conscription has been reduced to 12 months. Men aged between 20 and 38 are recruited for military service. After dismissal from the ranks of the armed forces, they continue to be liable for military service and are in reserve until the 45 age is reached. In wartime, men between the ages of 16 and 60 may be called up for military service, and also women between the ages of 20 and 46 may be able to wear weapon. At the same time, the population of Turkey exceeds 75 million people. The substantial demographic potential of the country, the developed system of training and mobilization capabilities make it possible in the shortest possible time to staff the armed forces with a significant number of military personnel of all combat arms and types. According to experts, the total mobilization potential of Turkey is estimated at approximately 18 million people.

Currently, the main problem of the Turkish army is the lack of a sufficient number of samples of modern and modernized weapons (especially in the ground forces). A significant part of weapons in service was purchased from Israel and the United States, with some of the weapons that Turkey has to import completely. At the same time, Turkey is not interested in the modernization and rearmament of its army through the purchase of equipment abroad. Ankara's priority is the development of its own defense industry. According to existing plans, by 2016, Turkey expects to enter the top ten countries with the most developed national defense industry.

According to Professor Nurkhan Yenturk, representing the Stockholm Peace Research Institute (SIPRI), Turkish military spending is only partially open. Therefore, the information for analysis has to be collected literally bit by bit. According to the specialist, Turkey’s total defense expenditure in 2013 amounted to 17,2 billion dollars. In 2014, this figure will reach 18,9 billion, and in 2015, 20,3 billion. Over the past few years, Turkey’s defense spending has fluctuated within 2-2,5% of the country's GDP. According to the available data for 2012 for 44 states in Europe, the largest percentage of state funding for military needs was recorded in Azerbaijan - 4,6% of GDP, followed by Russia, Armenia, Georgia, the United Kingdom, Ukraine and Greece (a place is divided by 6), France. Turkey with 2,36% GDP shares 7 place with France. 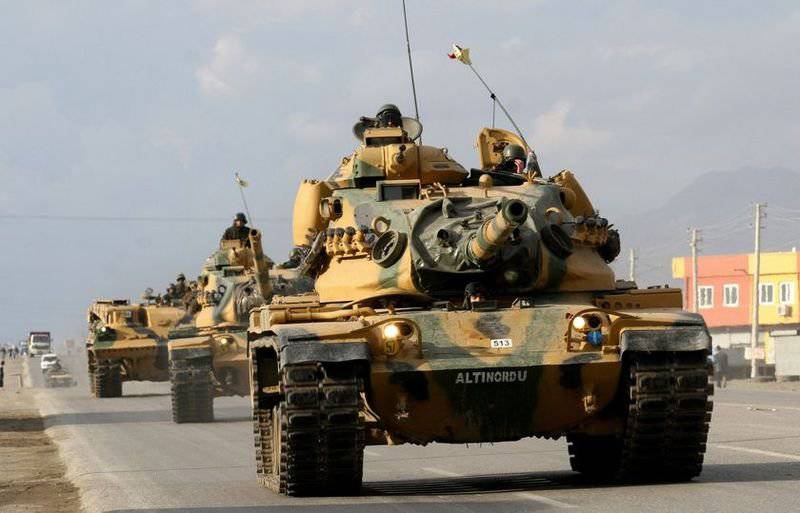 The trend towards the development of our own defense-industrial complex is also demonstrated by the spending dynamics of the state investment fund supporting the defense industry. According to Nurkhan Yenturka, every year the costs of modernizing the army, designing its own prototypes and purchasing new equipment increase by 100 million dollars. For example, in 2013, the fund spent 1,3 billion dollars, in 2014, about 1,4 billion was planned, and in 2015 - 1,6 billion.

At one time, Turkey fought Russia more than 30 times. The last time it happened in the First World War.

Turkey quite actively "courting" the representatives of Muslim, mainly Turkic peoples living in Russia. In the interests of Ankara - increasing its influence in the territory of Central Asia, the Caucasus and the Crimea. According to Natalia Ulchenko, who is in charge of the Turkish sector of the Center for the Study of the Near and Middle East of the Institute of Oriental Studies of the Russian Academy of Sciences, the Crimean Crisis can return the Russian Federation to the list of potential threats to Ankara. 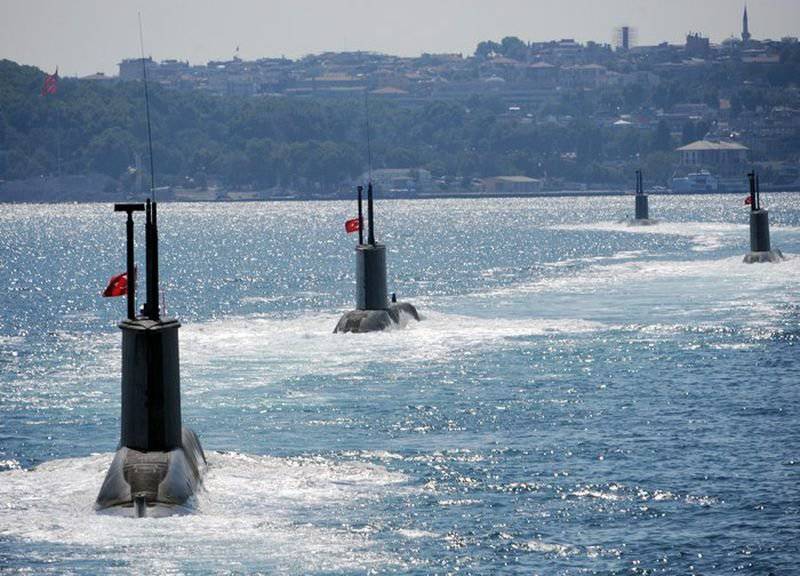 According to the scientist, today Turkey is concerned about the situation that is developing around the Crimean Tatars, as well as questions of the use of the Black Sea straits. At present, Ankara has already stated that the actions taken by Russia violate the partnership system that was built by the Black Sea Economic Cooperation Organization. In addition, rallies are held in Turkey to support the Crimean Tatars. According to the expert, these meetings are due both to the real concern of Turkish public opinion and the desire of the country's authorities to shift the attention of the population from other problems.

At the same time, the fleet of Turkey is constantly growing in number and is being modernized. All 14 Turkish submarines were built in Germany on the project Typ 209. This is one of the most successful diesel-electric submarines supplied for export, it is in service with 13 countries of the world. Buyers are attracted by the combination of low prices and high performance characteristics of these boats (good equipment, low noise). 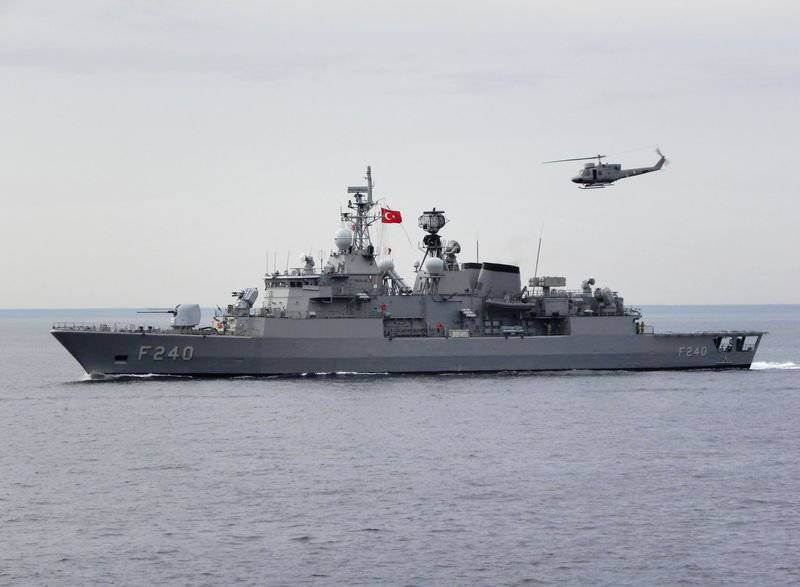 Back in Soviet times, the Turkish military fleet consisted mainly of barriers and minesweepers, which were received from the NATO allies, but now it is based on frigates and corvettes armed with guided missile weapons, small rocket ships and diesel-electric submarines. As part of the Turkish fleet 19 frigates and 7 corvettes. The 7 frigates are of the MEKO 200 type, they were designed in Germany by the shipbuilding firm Blohm + Voss, the newest frigate of this type was introduced into the Turkish Navy in the 2000 year. In addition, as part of the Turkish Navy, there are frigates, taken from service with the American fleet. These are the Knox-type 3 frigates (built from 1969 to 1974) and 8 frigates of the Oliver Perry type, these frigates are built in series from the 51 from 1977 to 1989.

Also in service with the Turkish Navy is 6 PLO corvettes, which were transferred to France. These are corvettes of the type “D'Estienne d'Orves”. These ships were built in France from 1976 to 1984 year. Another corvette in service is a MILGEM corvette (Milli Gemi, from a Turkish national ship). Total built 2 corvette of this type, another 6 ships of this type are under construction. It is planned to build a series of such corvettes from 12. This ship is an attempt by Turkey to independently develop a modern warship. At the same time, during its creation, German developments were widely used, and all the armament of the vessel was represented by American designs.

Sufficiently serious force and represent the Turkish Air Force. Currently, the country's Air Force has more than 400 combat aircraft. Of these, the most efficient are the X-NUMX F-208C / D fighters, which are built in Turkey under license. According to military experts, in their professional training, the number of flight hours (including in mountain conditions and at low altitudes), as well as the moral and psychological attitude, the Turkish Air Force pilots are among the best trained in the NATO Air Force. In the region of the Middle and Near East, the Turkish Air Force is qualitatively and quantitatively inferior only to the Israeli Air Force. At the same time, the program for the supply of early warning radar (long-range radar detection) aircraft is a major boost to the country's air force. Turkey ordered Boeing 16 Peace Eagle 4 aircraft, the first aircraft of this type was delivered in January 737, the delivery of the second aircraft is expected in the middle of this year. 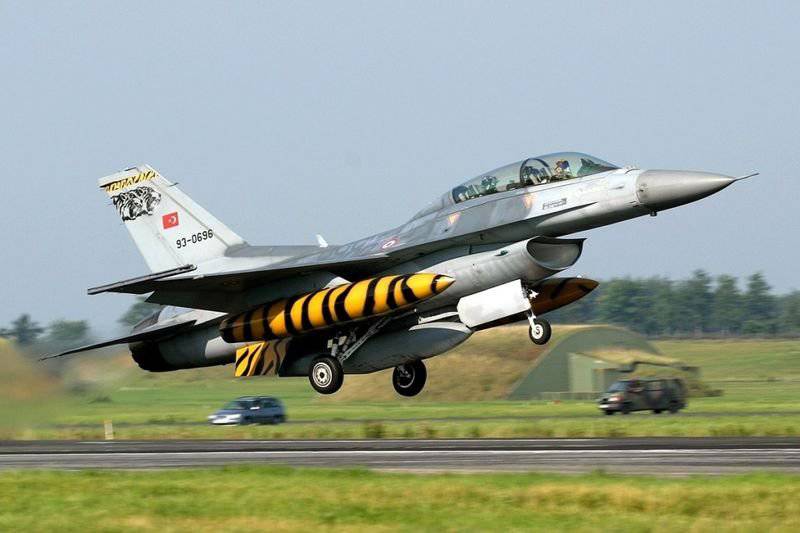 Experts estimate the level of combat readiness of the Turkish Armed Forces as quite high. The armed forces of the country have a substantial number, professional and disciplined officer corps, satisfactory technical equipment. According to military experts, the Turkish Armed Forces are able to conduct large-scale long-term hostilities both independently (primarily at the operational and operational-tactical level), and as part of the combined NATO forces. The Turkish army is equally well suited for counterinsurgency within the country and the defense of borders, as well as for large-scale external attack.

Ctrl Enter
Noticed oshЫbku Highlight text and press. Ctrl + Enter
We are
Crimea. Anniversary of the revival of RussiaTurkey vs Syria: the balance of power
Military Reviewin Yandex News
Military Reviewin Google News
54 comments
Information
Dear reader, to leave comments on the publication, you must sign in.