March 12 2014
1
In the eighties of the last century, the Italian company OTO Melara was actively engaged in studying the prospects of light armored vehicles. The result of this work was two projects of new armored vehicles suitable for use in police units and in the army. New cars had a number of advantages over the existing technology, because of which it was believed that they are able to interest a wide range of potential customers.

In 1982, the Italian defense company introduced a new multi-purpose armored vehicle. The declared characteristics of the car were high enough for use in the military or in the police. However, the attention of specialists was attracted not by the performance of the new armored car, but by its appearance. Specialists of the company OTO Melara were able to create a fighting vehicle with the appearance of a car. At the same time, however, the Gorgona R2.5 was a full-fledged armored car with fairly high performance. 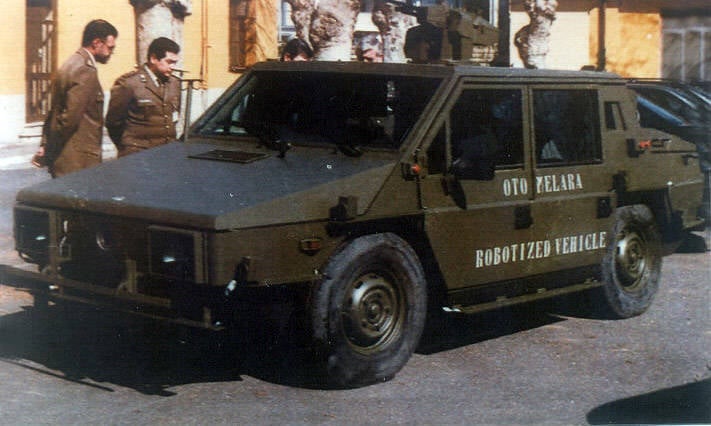 The body of an armored car of the "sedan" type was made of aluminum armor. Sheets of millimeter thickness 15-20 were set at different angles to each other, which made it possible to give the armored vehicle a relatively “peaceful” appearance. It was claimed that, at the request of the customer, the Gorgona R2.5 armored car could receive additional modules for protecting the body. The car was equipped with laminated glass 32 mm thick. According to reports, body armor and bullet-proof glass provided protection against bullets of pistols and machine guns. This level of protection was sufficient to use the car in the police, and if necessary it could be increased.

The dimensions of the new armored car were relatively small. The length did not exceed 4,8 m, the width was within 1,8 m, and the height was 1,5 m. The use of aluminum armor made it possible to provide a sufficiently high level of protection with a relatively low weight of the structure. The dry weight of the Gorgona R2.5 armored car did not exceed 2,4 tons. The maximum curb weight of the car reached 3,15 tons. Such indicators of the armored vehicle allowed us to use the diesel engine FIAT 8144.81.200 with the power of the 95 hp. It is noteworthy that the engine and part of the transmission units were placed in the rear of the hull and covered with less thick armor. Such technical solutions allowed to achieve an acceptable location of the center of gravity of the entire machine.

During the tests, prototypes of the OTO Melara Gorgona R2.5 on the highway developed speeds up to 120 km / h. New armored car could cross the water barrier swimming. When driving due to the rotation of the wheels, the speed on the water did not exceed 5 km / h. The authors of the project provided for the installation of a jet propulsion unit, thanks to which the speed on the water reached 8,5 km / h. As well as additional booking, the water cannon was supposed to be installed at the request of the customer. To ensure high maneuverability and maneuverability, the Gorgona R2.5 armored car had an all-wheel drive chassis with front steered wheels. Control of the machine is facilitated by power steering.

Machine Gorgona R2.5 offered to potential buyers in two versions. Thus, the Italian Carabinieri were offered armored cars without their own weapons. It was assumed that the carabineers could use their own small arms for self-defense. The modification, created for the police of Italy, in turn, carried a remote-controlled turret for weapons. Gorgona R2.5 armored cars could be equipped with a 7,62 or 12,7 mm machine gun, as well as a water cannon.

New armored car interested Italian security officials. Within a few years, the police and carabinieri received several dozen of these cars in various configurations. Soon after Italy, the Gorgona R2.5 armored cars were acquired by Saudi Arabia. In addition, some sources mention that armored vehicles of this type were supplied to some other Middle Eastern states. A noticeable number of Gorgona R2.5 armored cars are still used in various power structures, primarily in the countries of the Middle East.

In the early nineties, one of the Gorgona R2.5 machines underwent an interesting rework and became the carrier of an experimental control system. Armored car with a special designation R.2.5.Robotized System equipped with a radio control system and a number of auxiliary equipment. It should be noted that the experimental apparatus had several characteristic features. So, the used remote control system could shift the gearbox only to the reverse and back, and even this process was carried out with serious difficulties. Because of this, the experimental machine, using only the first gear, could accelerate only to 30 km / h.

The commercial success of the armored car Gorgona R2.5 allowed to begin work on the creation of its modification, intended for use in the army. The specificity of the army requirements led to the fact that the new machine, which received the designation R3 Capraia, retained from the base armored car only the chassis with the power plant. In addition, two projects combined some of the technologies and ideas used. 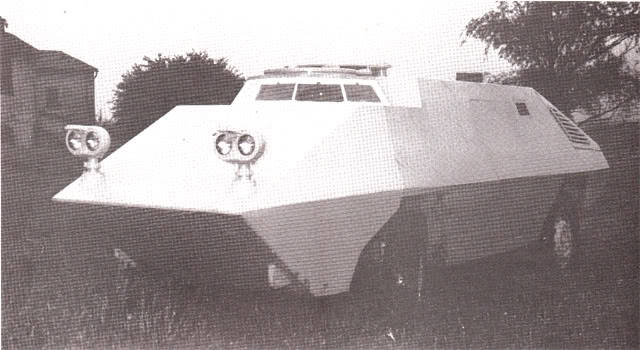 Biaxial all-wheel drive chassis was borrowed from the Gorgona R2.5 without any major changes. The layout of its units remained the same: engine power 95 hp and part of the transmission units remained in the rear part of the machine. Control systems, suspension, etc. remained unchanged.

On the base chassis of the machine Gorgona R2.5 was proposed to install a new armored hull of the original design. It is noteworthy that this unit was proposed to be made from the same materials and using the same technologies as the body of the previous armored car. In this case, however, the body of the armored car R3 Capraia should have been assembled from thicker sheets. The maximum thickness of the aluminum sheets of the case reached 32 mm. The use of armor of such thickness made it possible to protect the crew and units of the vehicle from rifle bullets.

The project R3 Capraia meant making a body of several even armor plates installed at different angles. The hull had a large upper frontal sheet mounted at a large angle to the vertical, as well as inclined sides. On the top front sheet there were two headlights of characteristic shape. The feed of the hull consisted of three parts, and in the vertical middle there was a window for cooling the engine. The roof of the armored car was made in an interesting way. The front part of it, starting at the upper frontal hull plate, was installed below the middle and rear. It housed a small turret mechanic-driver with viewing devices.

The turret design provided the driver with a good overview: the width of the visible sector reached almost 180 °. The inclination of the upper front hull sheet also had a good effect on the review. For embarkation and disembarkation the driver could use the hatch above his workplace. In addition, the entire crew could leave the car through a large door in the port side. Depending on the weapons used, the crew of the OTO Melara R3 Capraia armored car was to consist of three, four or five people. The commander was located in the middle of the car, behind and to the right of the driver. His workplace was equipped with periscopic viewing devices mounted on a small turret on the roof of the car. 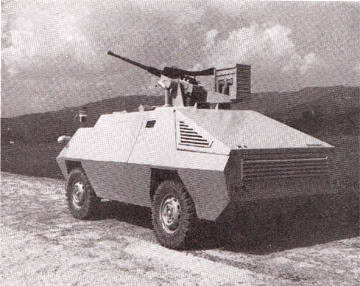 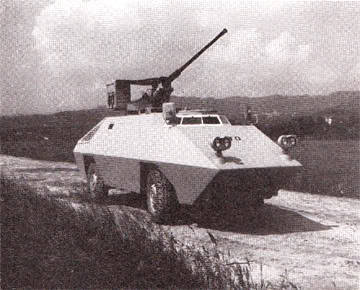 The authors of the project R3 offered customers six options for arming the new armored car. Depending on the needs of the buyer, an armored car could carry one of the following systems:
- T7.62F. Remote controlled turret for machine gun caliber 7,62 mm. The 180-kilogram unit allowed to fire in any direction with an elevation angle from -10 ° to + 25 °;
- T12.7F. Turret, designed to install a large-caliber machine gun. The design of the unit weighing 120 kg allowed to direct weapon ranging from -10 ° to + 50 °;
-T20FA-HS. A combat module with an Oerlikon 20-mm automatic cannon and 120 rounds of ammunition. The turret made it possible to fire with elevation angles from -10 ° to + 60 °. The total weight of the system reached 450 kg;
- Folgore x2 FA. In this version, two recoilless Breda Folgore guns of 80 mm caliber and one 7,62-mm machine gun were installed on the roof of the armored car. The weight of the structure is of the order of 150 kg;
- T106 x2 FA. A similar system using the American recoilless gun M40 caliber 105 mm. A larger caliber of guns led to a heavier structure: such a combat module weighed about 550 kg;
- TOW Turret. Weapon system based on the two previous combat modules, equipped with anti-tank missiles BGM-71 TOW.

The use of the chassis of an armored car Gorgona R2.5 affected the characteristics of the new car. Prototypes of the R3 Capraia armored car on the highway reached speeds of up to 120 km / h. When driving on water, the maximum speed did not exceed 6 km. The supply of fuel was enough to overcome 500 kilometers. Thus, the designers of the company OTO Melara managed to make an armored car, adapted for use in the armed forces, but at the same time keep its characteristics at the level of the base machine, designed for use by the police.

Despite the characteristics shown and the possibility of using various weapons, the Italian military did not become interested in the OTO Melara R3 Capraia armored vehicle. Several built armored cars were written off shortly after the tests.