March 5 2014
8
In the fifties of the last century, American gunsmiths worked to create a new rifle weapons under the SALVO program. The aim of the program was to create an automatic rifle with high performance, with the main emphasis on the density of fire. One of the main ideas of improving the characteristics of weapons was the use of special cartridges with two or three bullets. However, Olin and Winchester decided to enforce the requirements using not only the new cartridge, but also the original architecture of the weapon itself. So there was a project Olin / Winchester SALVO Assault Riffle. The project of a new automatic rifle was created under the leadership of designer Stefan K. Jenson. 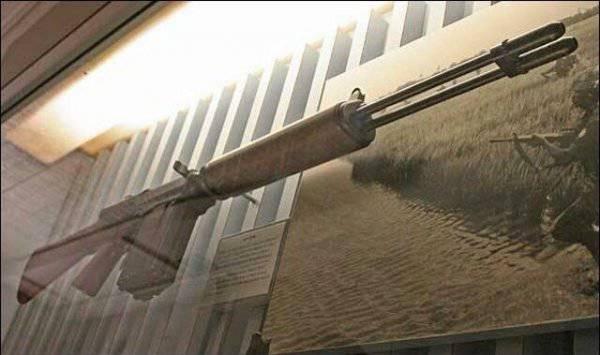 In the new SALVO Assault Riffle rifle the T65 cartridge, equipped with two bullets, was to be used. This ammunition was made on the basis of the sleeve of a standard NATO rifle cartridge 7,62x51 mm. It was proposed to load a reduced powder charge and place two special 5,56 mm bullets into a sleeve with a reduced diameter of a barrel. The first of the bullets had a notch in the bottom, in which the second bullet was held. Such a design of the cartridge, as expected, could significantly increase the fire power of small arms, increasing the density of fire. The expected benefits from the use of the original two-cartridge cartridge attracted the attention of designers under the leadership of Jenson.

Apparently, the employees of Olin and Winchester wanted to simplify the production of a promising automatic rifle, because of which the existing model was taken as the basis for it. The SALVO Assault Riffle project was created based on a Belgian-made FN FAL rifle. This weapon borrowed some of the details and the principle of operation of automation. At the same time, however, S.K. Jenson and his staff had to re-develop a large number of parts, which was due to the main features of a promising weapon system.

Wanting to further enhance the firepower of the new rifle, the authors of the project made it double-barreled. In fact, the SALVO Assault Riffle automatic rifle represented a block of two FN FAL, united by a common receiver and some other details. Designers found a similar original architecture suitable for use in the army.

The basis of the design of the rifle has become a receiver of a characteristic shape. This unit was similar in shape to the corresponding part of the basic FN FAL, however, due to the original internal mechanisms, it was approximately twice as wide. Inside the receiver there was a common bolt group that interacted with both trunks. The shutter had a characteristic wide shape, was equipped with two drummers and two extractors, each of which served its own barrel. Locking barrels made by skewing the shutter in a vertical plane. Extraction of spent cartridges was carried out through two windows in the side parts of the receiver. The sleeves were thrown up and sideways.

Two 5,56 caliber barrels, mm in. Long 23 inches (58,4 cm or 105 gauges) were placed side by side. Both barrels were connected to a common vapor system. It was assumed that when firing, the powder gases from both barrels would put pressure on the common gas piston and thus prepare the rifle for a new shot. Each of the SALVO Assault Riffle rifle barrels was equipped with a muzzle brake of a characteristic cylindrical shape with a tapering muzzle.

To simplify the design and operation of the new double-barreled rifle, the engineers of the Olin and Winchester forms decided not to develop a new store. The supply of a promising automatic rifle was to be carried out from two separate box magazines for 20 cartridges each. The stores were borrowed from the FN FAL rifle without any changes. Each of the stores "worked" only with its half gate and its trunk. Due to this, the shooter could use both barrels and one of them. This possibility could increase the survivability of weapons in combat conditions, since the damage to one of the barrels made it possible to continue firing, albeit with corresponding losses in the rate of fire and fire density. 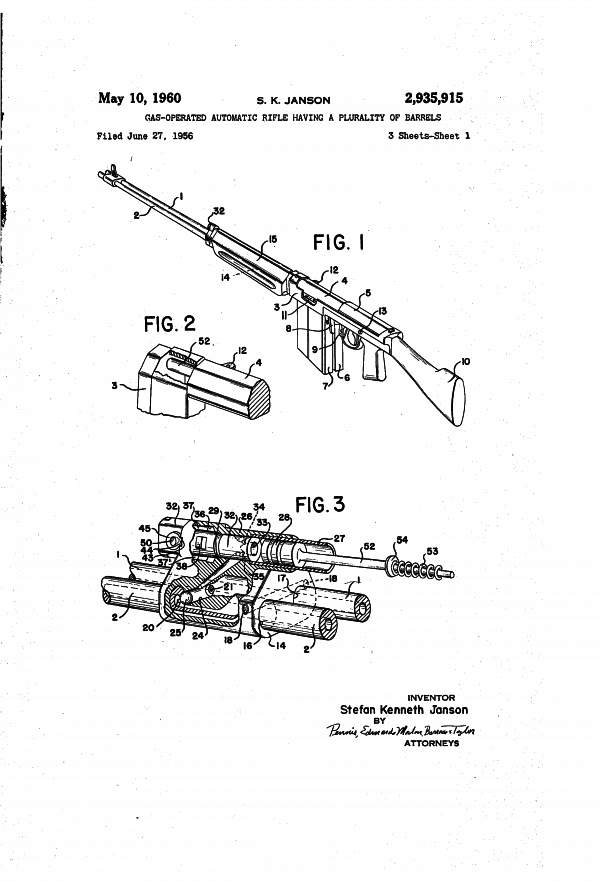 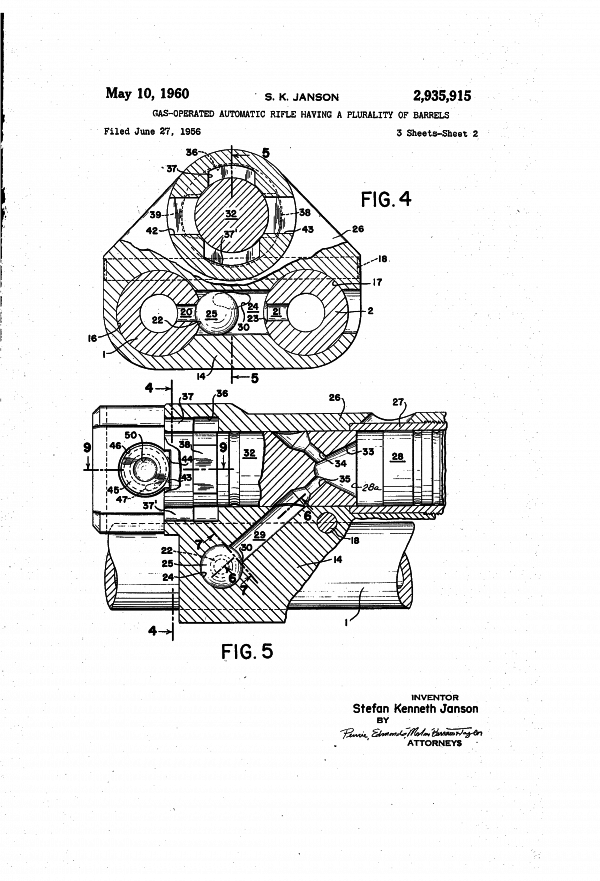 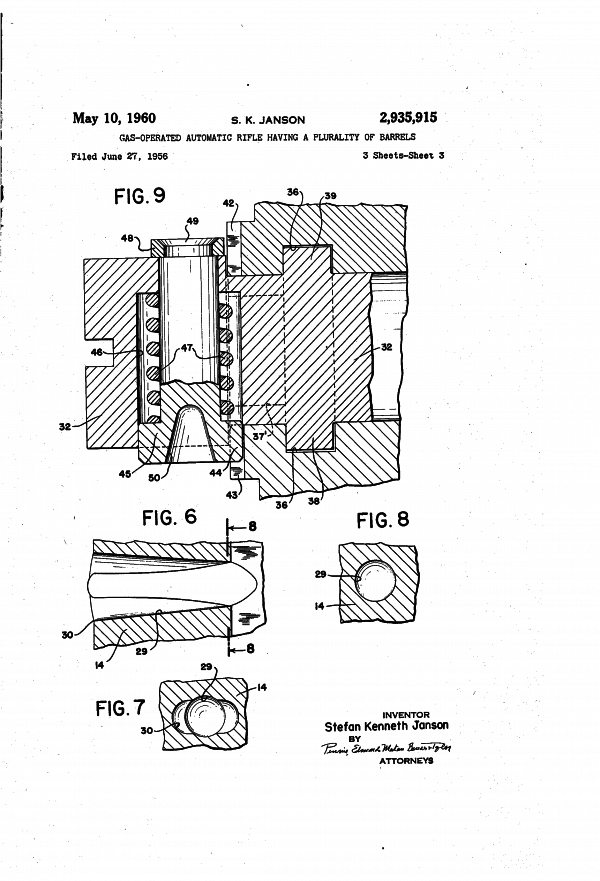 For use on the rifle Olin / Winchester SALVO Assault Riffle, a new handguard was developed, the basis for which was a similar detail FN FAL. Butt and pistol grip fire control, for obvious reasons, were borrowed without any changes. Sights also had the same “origin”. The diopter sight was located in the rear part of the receiver cover, the front sight was above the vapor tube.

In mid-February, the 1956 project of a promising double-barreled automatic rifle from Olin / Winchester was tested in the Springfield arsenal, after which preparations began for testing prototypes of new weapons. The first shooting took place in 1957 year.

The Olin / Winchester SALVO Assault Riffle rifle used two types of T65 ammunition during the tests. The bullets of the first had a weight of 35 grains (2,26 grams), the second - 41 grains (2,65 grams). The initial velocity of the bullets of the first type reached 3505 feet per second (about 1068 m / s), the second - 3250 f / s (990 m / s). The technical rate of fire of the two barrels reached 1300-1400 rounds per minute. It should be recalled that the new rifle had two barrels and used two-gun cartridges, which made it possible to send four bullets to the target in one cycle of operation of the automation. Thus, in theory, SALVO Assault Riffle could have fired at least 2600 bullets per minute against the enemy.

Despite the use of an unusual automation architecture, two barrels and a new cartridge, the advanced automatic rifle from Olin / Winchester should have acceptable accuracy. For example, in 1957, a test of accuracy and accuracy of shooting took place, during which the test shooter made two rounds of five shots from two barrels at targets located at a distance of 150 and 300 yards (137 and 274 meters, respectively). In the first case, all 20 bullets fit into a circle with a diameter of 7 inches (17,8 cm). Maximum dispersion when shooting at long distances did not exceed 30 inches (76,2 cm). 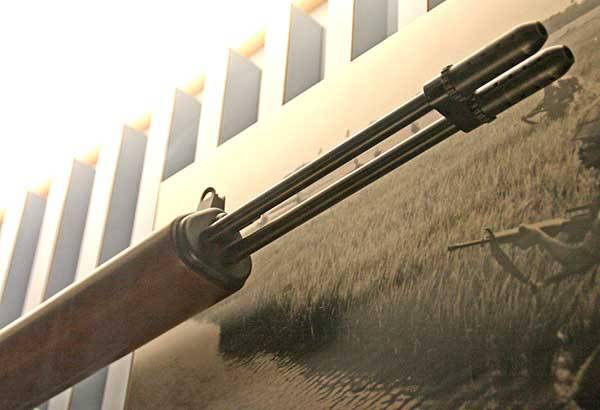 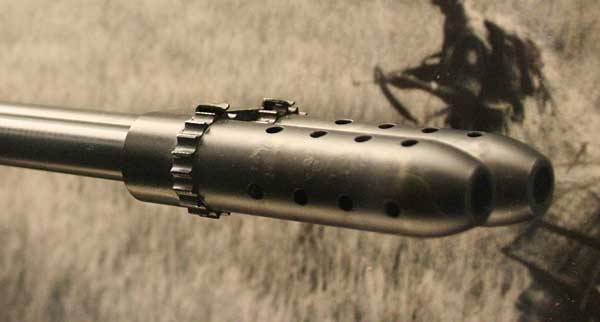 Tests have shown that the Olin / Winchester SALVO Assault Riffle automatic rifle has 3-4 times more fire power compared to weapons of the same caliber using a standard single-cartridge cartridge of the same caliber. At the same time, acceptable shooting accuracy was provided, one of the prerequisites for which was a relatively low return. It was found that the recoil force of a double-barreled rifle is only a quarter higher than that of the M1 Carbine carbine with the .30 Carbine cartridge (7,62x33 mm).

A prototype of the Olin / Winchester SALVO Assault Riffle automatic rifle has been used in trials and research on advanced small arms for several years. Despite the relatively high performance, the project firms Olin and Winchester remained experimental. The only rifle of this type in the mid-sixties was transferred to the Museum of Springfield Arsenal. In some sources it is mentioned that several SALVO Assault Riffle rifles took part in the tests, however, only one specimen of this weapon was confirmed.

Despite the fact that the automatic rifle designer S.K. Jenson was not put into service, it allowed American gunsmiths to gather important information about promising areas of development of small arms. In particular, the SALVO Assault Riffle rifle, like other samples developed under the SALVO program, clearly demonstrated the advantages of 5,56 mm caliber cartridges, and thus to some extent influenced the further development of American small arms. 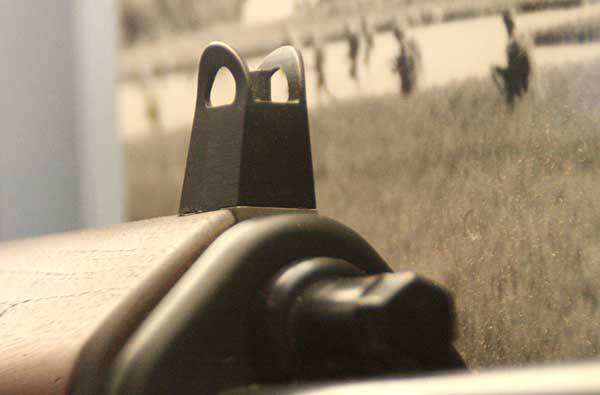 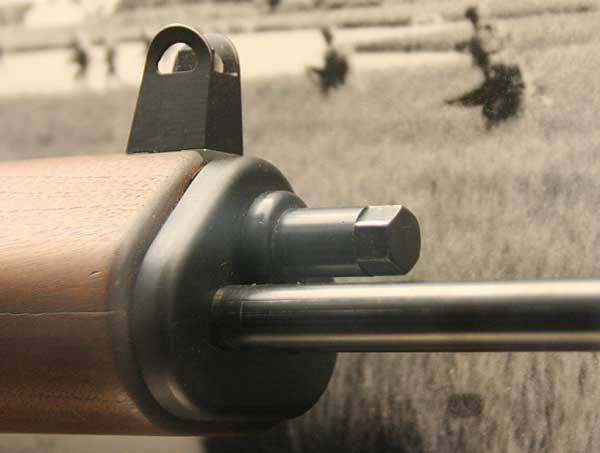 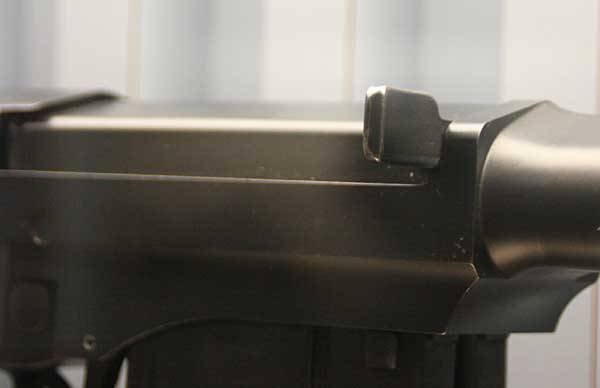 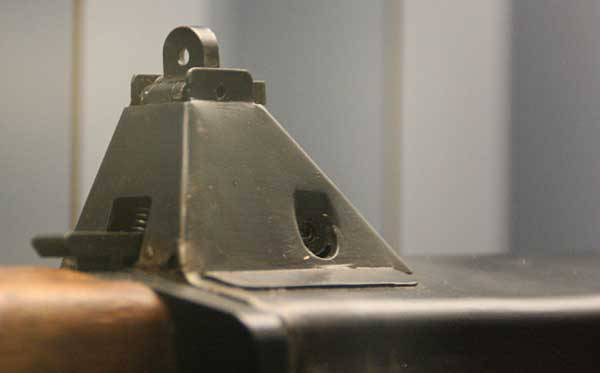 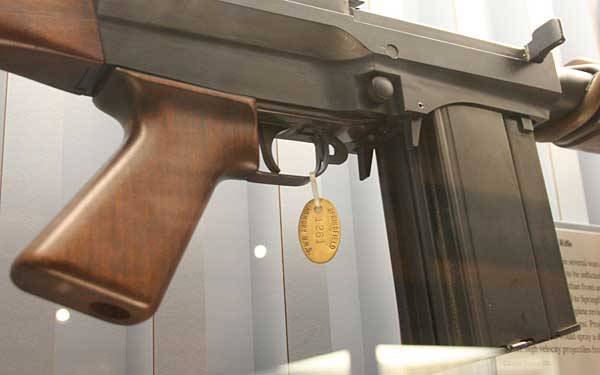 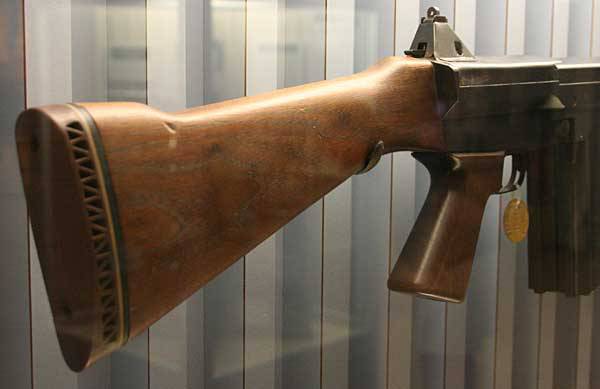