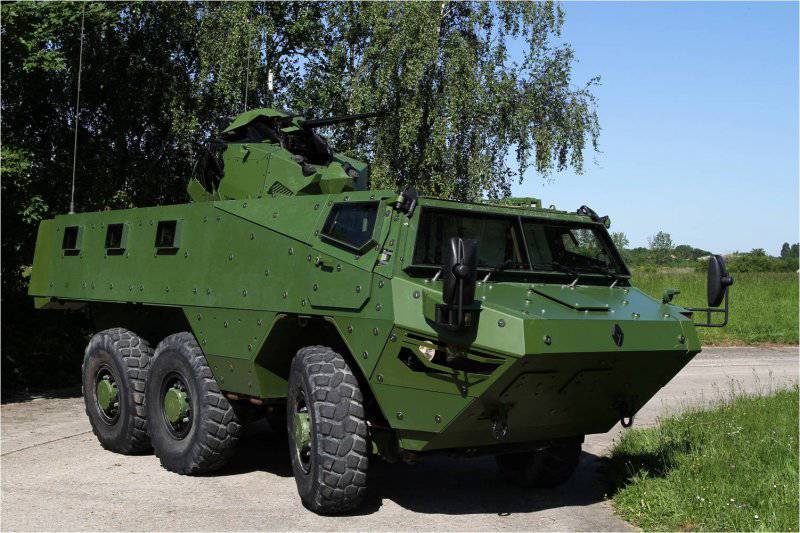 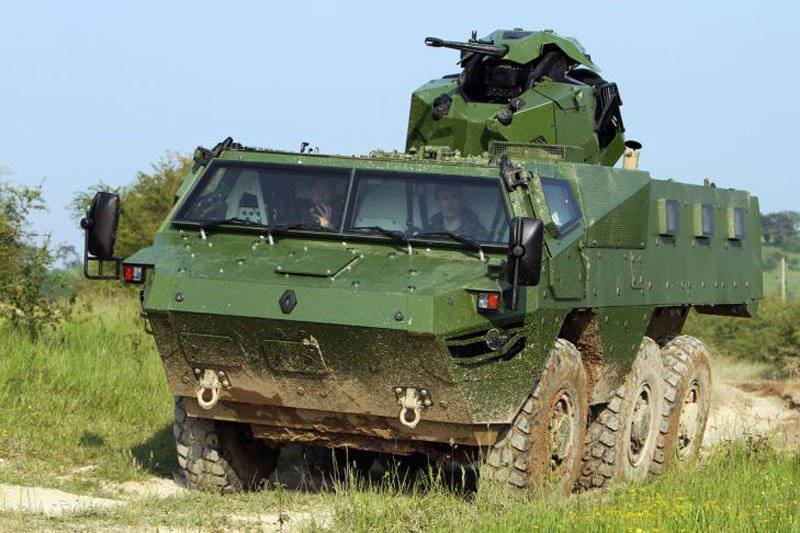 Renault Trucks Defense is targeting the export market for VAB Mk 3. In the photo, the machine is equipped with a remote-controlled TRT-25 module from BAE Systems Land Systems South Africa, armed with a stabilized 25-mm M242 cannon and 7,62-mm coaxial machine gun 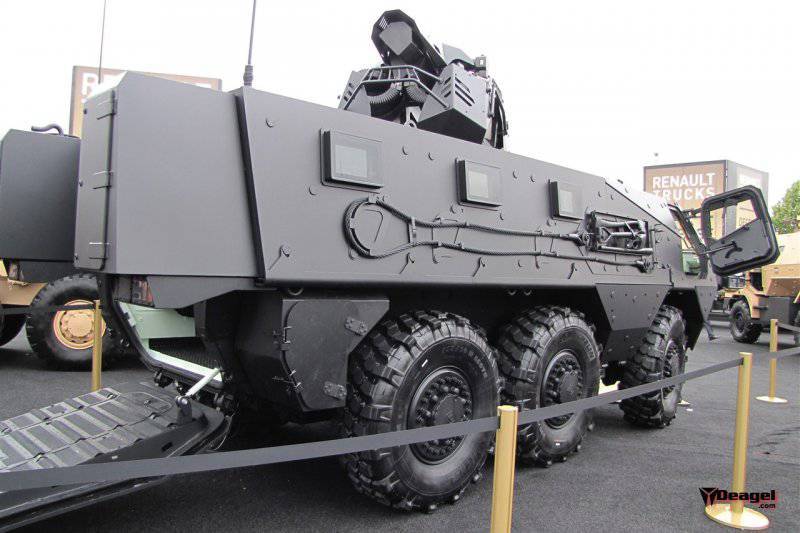 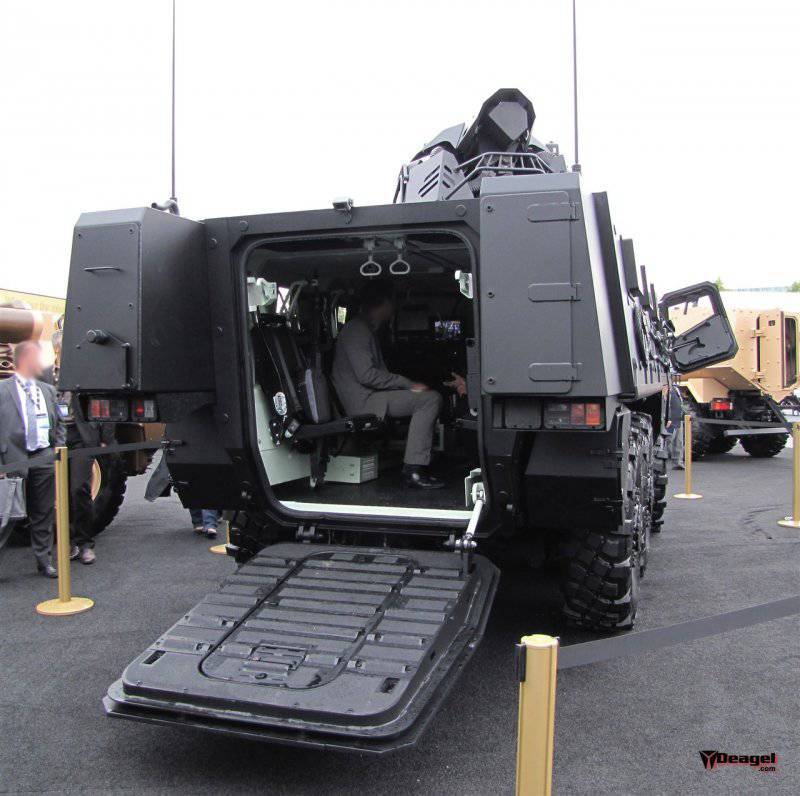 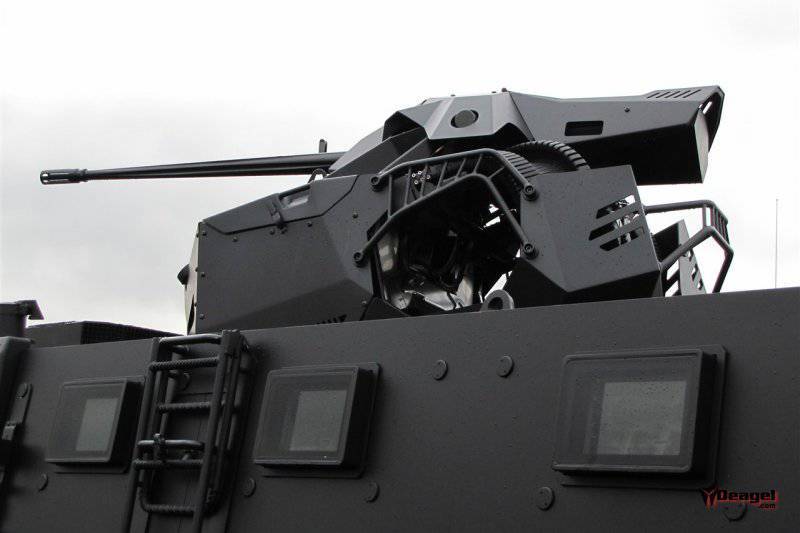 The new 6x6 wheelsets were manufactured by the middle of the 2013 year.

Deliveries of the original VAB, developed by the French army, were completed in 1976, the army eventually received 3975 machines in the 4x4 configuration, many of them are still in use in more than 25 versions. Additional export orders for VAB 4x4 and 6x6 machines raised the total number of manufactured machines to more than 5000 units.

The prototypes of the Mk 2 variant were first shown to the public in the middle of 2010 in the 4x4 and 6x6 configurations, but the feedback from potential customers showed that only large-capacity, heavy-duty, and protective machines could meet future requirements.
Potential buyers also wanted to have a modular design that allows you to use the machine for various tasks and install different weapons systems. In addition, there is a need for significant growth potential, because today, as a rule, machines have a life span of 30 years or more.

The Mk 3 model has now resolved these issues; Two unnamed clients from the Middle East showed considerable interest to the Renault Trucks Defense company car, one of whom has the opportunity to establish joint production.

The companies see two main markets for VAB Mk 3: replacement of existing vehicles, for example, outdated VAB Mk 1, Russian 8x8 BTR or tracked armored vehicles of the M113 family; and a market for buyers looking for new lightweight infantry fighting vehicles that can be easily transported.

For example, the company claims that the VAB Mk 3 can provide up to 80% of the capabilities of a larger 8xNNXX configuration machine at only half the cost. In addition, it is reported that the levels of protection are similar to the levels of protection of American MRAP machines, but at the same time off-road maneuverability and functional flexibility have been improved, which allows for a wider range of combat missions.

The original version of the VAB Mk 1 4x4 had an internal volume of 9,3 m3 and a total weight of up to 13 tons. In the recently upgraded VAB Mk 1 ULTIMA machine of the French army, the mass was raised to 15,8 tons. However, the total mass of the Mk 3 variant is 20 tons, the internal volume of the 13 is M3, it will only be available in the 6x6 configuration, but will also have better off-road permeability.

The total tonnage of 20 tons in the Mk 3 includes the tonnage capacity of 7,5 tons, which is reserved for the crew, weapons, ammunition and a reservation kit. The Mk 3 can be distinguished from the original Mk 1 6x6 by the increased distance between the first and second wheels.

The overall layout of the VAB Mk 3 remains the same as the original VAB Mk 1. The driver sits in front to the left directly ahead in front of the power unit, the car commander on the right.

A small passage on the starboard side connects the driver with a large detachment of troops in the stern. The commander and driver are located on suspended seats, whereas in the basic version of the 10 transporter, the paratroopers sit on separate, inward-looking, explosion-proof seats, five on each side. To accommodate cargo seats can be folded. The machine is equipped with a side door with an amplifier and a large hydraulic ramp in the stern, there are also hatches over the driver and commander and two additional hatches above the troop compartment. If necessary, an 7,62-mm machine gun in a protected turret can be installed above one of the rear hatches.

Modular armor kits can be installed on an all-welded armored steel body in order to increase anti-bullet protection to 4 STANAG 4569 and mine protection to 2a / 2b with the prospect of upgrading to 3a / 3b. The commander and driver have large bulletproof windscreens, and the first demonstration model, the Mk 3, on each side has three large windows that can be equipped with loopholes.

On top of the booking kit, grid screens can be added to protect against the threat of RPGs, as was done on the VAB Mk 1 ULTIMAS machine deployed in Afghanistan. But such a modification would make a bulky standard machine that maintains the width of earlier 2,55 mm models, allowing you to drive on public roads unaccompanied.

In order to add an additional level of protection in case of punching the case, a fire detection and extinguishing system is installed on the machine.

Due to the installation of systems outside a significant internal volume was released. For example, on each side of the stern there are protected compartments, the left box holds the WMD protection system, and the right one - the air conditioning system.

While the French army removed the amphibious capabilities of earlier VAB models, the Mk 3 is capable of maintaining buoyancy with a total weight of up to 16 tons; afloat it is driven by two fodder jets.

The EURO III Renault Dxi 3 horsepower 7 hp diesel engine is installed on the first VAB Mk 320, which, with a minimum of modifications, can be EURO IV when the power is increased to 340 hp. It is connected to an automatic transmission ZF, which has six gears forward and one back.

The machine has the potential to grow, you can install a hp 400 diesel engine on it. EURO V. But in the standard configuration of the power unit power 320 hp enough to accelerate the car to 105 km / h, while it is quite economical, which allows you to have a power reserve 890 km. The 310 Ampere generator is sufficient to provide power for the onboard systems.

The Mk 3 has power steering on the front wheels and independent suspension for good grip. The first copy of the VAB Mk 3 had a built-in central wheel inflation system, but in the serial version it comes as an option along with protivoproskalnye inserts, controlled by the rear axle and cold start for operation at temperatures below -32 ° C.

The standard equipment of the Mk 3 machine includes an electronic architecture from Renault Tracks Defense called “Battlenet Inside”, which will simplify future upgrades and offer automatic configuration options so that you can quickly change assignments even when performing a combat mission. This architecture forms the basis for an intercom system, external radio stations, a battle management system and circular information awareness cameras, as well as crew and landing displays.

An energy management system, a system for monitoring the status and use of systems, a warning system for laser irradiation, grenade launchers and acoustic detection devices can also be automatically integrated into the architecture of the machine. 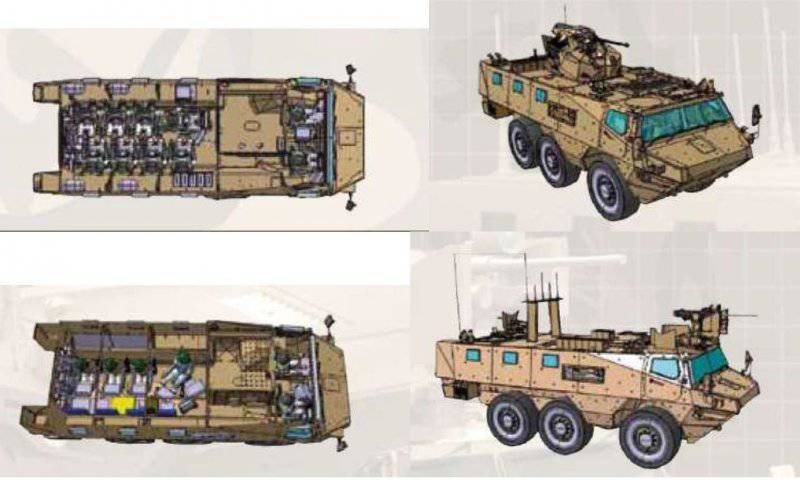 (Above) Layout of the VAB Mk 3 BMP version. (Bottom) The VAB Mk 3 command center option is distinguished by a raised roof and jobs for four crew members.

Over the troop compartment of the base machine, a remotely controlled module armed with a stabilized 7,62-mm or 12,7-mm machine gun will be installed as standard. Alternatively, the module can be installed above the commander’s position as on French VAB vehicles in Afghanistan. For use as an option for the BMP, the Mk 3 can take on a variety of weapons, up to the 30-mm gun.

At the first demonstration in the middle of 2012, a TRT-3 module (Tactical Remote Turret - a tactical remote-controlled turret) from BAE Systems Land Systems South Africa, armed with a stabilized M25 25-mm 242-mm coaxial machine gun and sighting day / night optics along with a computerized MSA. 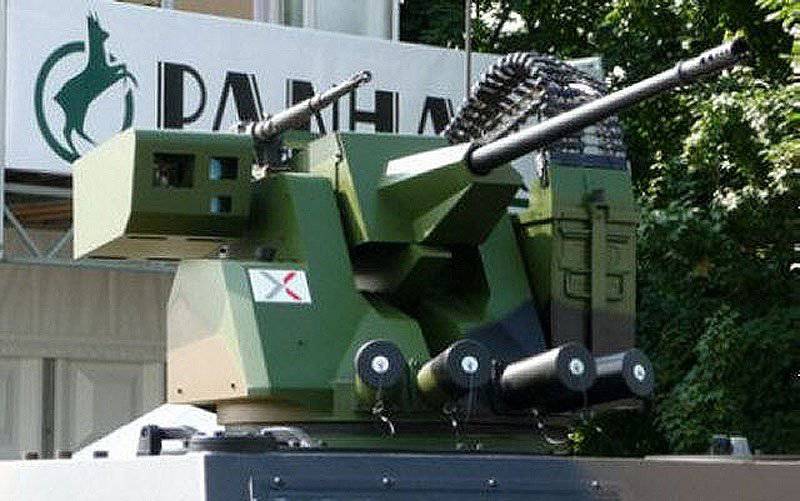 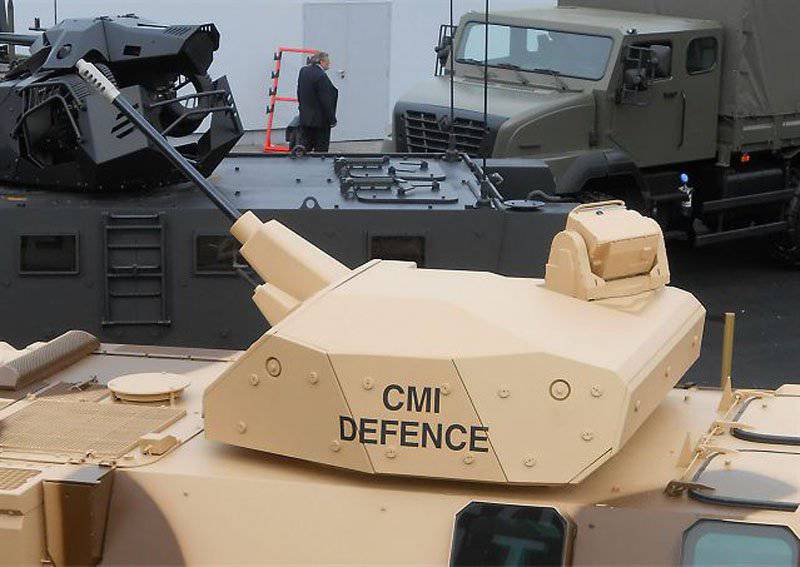 Other mid-caliber modules can be installed on the machine, such as the ARX-20 from French Nexter Systems and the recently introduced Protected Weapon Station (CPWS) from CMI Defense Cockerill, which can accept various weapons of caliber from 20 to 30 mm.

Theoretically, a single-seater tower with similar weapons could be installed on the car, but the basket of the tower would occupy valuable internal space in the troop compartment.

Renault expects to make an initial batch of 10 VAB Mk 3 machines in several configurations, replacing the rear ramp with doors, removing the armor in order to obtain the basic universal option, raising the roof for the sanitary option and maybe even installing a hybrid electric drive.

The sanitary option, along with specialized medical equipment, will be able to transport two sedentary patients and up to four patients. A variant with a raised roof can also be suitable for a command post; a more specialized version of a mortar transporter armed with an 81-mm or 120-mm mortar is also being designed. The preferred option here is an 120-mm threaded sliding mortar 120R2M from the French company TDA.

The 120R mortar is already being produced for several customers; it was at one time qualified by the French army for the old VAB model Mk 1 6x6. The Mk 3 mortar transporter will have a crew of four people and haul up 40 mortar rounds.

The reconnaissance version can be equipped with a mast sensor unit with a surveillance radar, day / thermal cameras and a laser rangefinder / pointer. He will also be able to transport a small UAV, for example Novadem, a satellite communications system and a battle management system.

The VAB Mk 3 variant, as well as its predecessor Mk 1, could be used to transport anti-tank weapons or be equipped with various anti-tank or anti-aircraft missiles.

The production of the first 10 machines will be carried out at the Renault plant in Limoges, which will be able to produce 100 machines per year with single-shift operation.