February 26 2014
70
According to statistics, today in the armored and artillery units of the Israel Defense Forces (IDF) women make up one fifth of all military personnel. In the Israeli rescue service (similar to the Russian Emergencies Ministry) more than a quarter of the fair sex. About the same number of them in the Air Force. But even in this thoroughly emancipated army there is a special division, where modern Amazons number over seventy percent! This is the 33 battalion "Karakal", organizationally part of the 512 territorial squad "Sagi" of the Edom division of the Southern Military District. 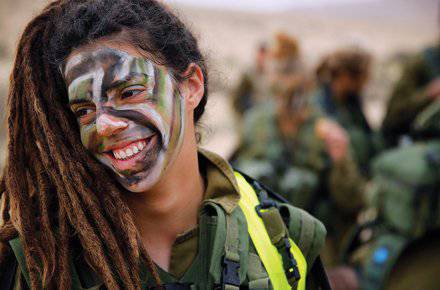 During the Israeli War of Independence, the fair sex took an active part in the battles, received wounds and died on a par with male soldiers. But then, despite the mandatory military service established by law for women, their way into combat units was forbidden. Only in the early 1990s were vacancies in artillery and tank divisions, as well as the air force flight school and courses for junior naval officers.

But since there were a huge number of women who wanted to serve in combat, rather than auxiliary posts, a separate experimental female company appeared in 2000? M in the Israeli army, deployed to the battalion four years later. It got its name in honor of the clever and cautious predator that lives in the Arava desert - lynx caracal, the “sand cat”, males and females of which do not look different from each other. The distinctive signs of the battalion’s servicemen were beads of a green color with an infantry emblem and red landing boots.
Now, when the difficult period of the formation of an unusual unit has already been passed and the experiment has been recognized as successfully held, the battalion carries out a barrier service at the borders with Jordan and Egypt. In addition, his soldiers patrol on the approaches to the city of Eilat, located on the shores of the Gulf of Aqaba, and on the roads of the south of the country, preventing the infiltration of terrorists into the central densely populated areas of Israel. There are a lot of detained intruders in the asset of “predators” - from Palestinian militants, Egyptian smugglers and their Israeli accomplices to illegal immigrants from Africa, a significant amount of seized drugs, caches of smuggled goods found. 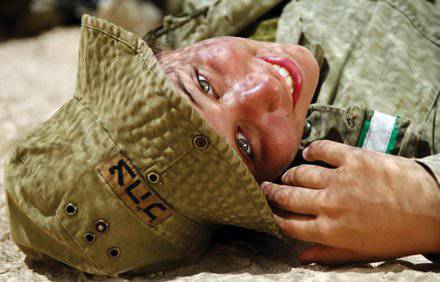 Nowadays, the distribution in Karakal is one of the most honorable recruits can receive. Competition in the battalion as a prestigious university - seven to eight people in place. And this is despite the fact that women serve here not for two years, as their tribeswoman in other military units, but three - as Israeli men. If the candidate who has passed the tests and medical examination is the only child in the family, then she will need to provide the written consent of the parents in order to become a “sand cat”. If she has a brother or sister, then papa and mama will learn about the decision of their unprofitable daughter, as a rule, when she finds herself in a training center ...

And one more interesting fact: since 2009, according to the same statistics, 30% of the fighters of the battalion are Russian-speaking. Draw your own conclusions.

Since the “Karakal” is classified as a battalion of light infantry, before continuing the story about this unusual unit, it is worth explaining how similar Israeli military units look and how combat training is organized in them.

It is divided into several levels or categories in the Israel Defense Forces - ruwai, reflecting the amount of knowledge gained in military affairs and the intensity of the occupations themselves. The soldiers of the rear units have the category 02. Those who serve in combat infantry units are 07, sergeants who have completed three-month individual training courses are 08. Officers of combat units have the highest rank - 012 and must comply with it throughout the entire service. 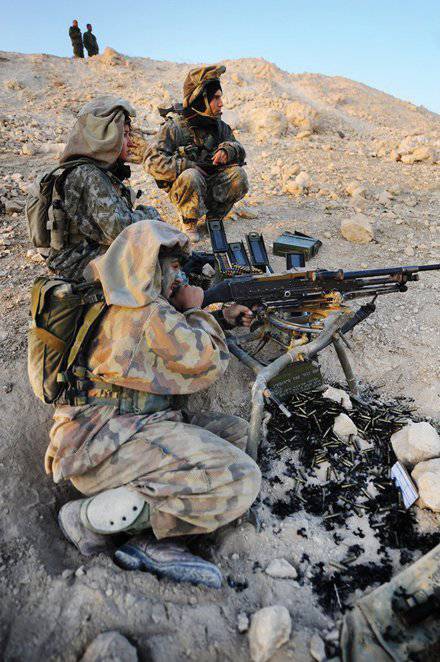 After being recruited, infantry recruits for four months undergo a “course of a young fighter”, which ends with the passing of tests and march-throw with numerous introductory. Those who successfully pass all of these tests are assigned the 05 category and are allowed to wear the distinctive color of the unit in which their further service will take place.

This is followed by the 2,5 months of intensive study weapons, fire, physical and military medical training, after which the fighters receive 07 ruvai and proceed to the next stage - combat coordination during a multi-week exercise and field exits. It can last from 2 to 4 months. And only after that does the service begin, providing for participation in special border operations and combat operations.

In the same period, young soldiers take something like professional specialization courses, learning the subtleties and wisdom of one of the specific military specialties - the sniper, machine gunner, mortar gunner or grenade thrower. And the commanders and psychologists look and look out for those who have the natural makings of a leader: they will be sent to training sergeants. The rest will be distributed in combat companies - assault, fire support or combat support ...

The attitude of the army command to the “Karakal” battalion in the first years of its existence was, to put it mildly, not very serious. Ruwai for his soldiers installed 05 - it seems to be a battle one, but not quite. As for the engineering troops and border guard units. At the same time, the “lynxes” did not bother to develop a sleeve tag - an individual chevron unit, obviously not believing in the duration and positive result of the experiment. In general, the battalion tried to keep in the Arava desert near the Dead Sea - a place calm and even boring from the point of view of combat work.

And off we go! The discipline in the companies was at zero, the internal service was poorly organized, the Bedouin smugglers passed through the area of ​​responsibility of the battalion back and forth when and how they wanted. After the unit shook a number of sex scandals, information about which leaked to the press and outraged the public, the military command decided to restore order in this matter and got down to business seriously .. 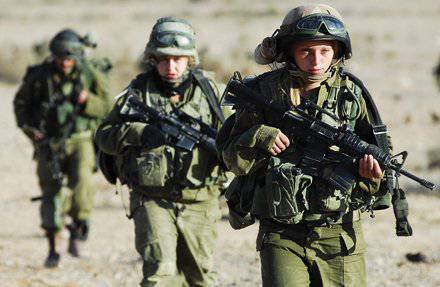 The officers and sergeants in the "Caracal" changed completely, the level of combat training raised to 07. In the discipline, the nuts were tightened so that they were not dreamed of in any infantry unit. Any amorous relationships were nipped in the bud, up to the transfer of men and women caught in a romantic relationship to each other, in military units stationed in various parts of the country.

And the battalion was transformed: from “soft and fluffy cats”, as Israeli newspapers called him fiercely at the beginning of 2000 x, the girls turned into real modern Amazons - deft, hardy, fearless, daring and skillful soldiers.

In general, the battalion became fully consistent with its name.

Stepping on the heels of men

The recruits of the Karakal take basic military training at the training center of the elite 84 infantry brigade Givati. They also master the main types of small arms and subsequently perfect their skills.

In the course of further combat training, girl soldiers receive the same military specialties as men, pass standards and tests without any discount for belonging to the weaker sex. Needless to say, they experience enough difficulties. For example, “magistrats” and “negevistkam” - company and platoon machine gunners - fall on field exits and during combat operations alone can be controlled with “Mag” and “Negev” machine guns, the mass of which without cartridges is 11 and 7,6 kg, respectively. The total weight of the soldiers' equipment of the desert Amazons surpasses two poods. 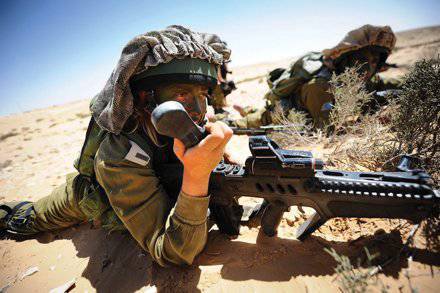 Therefore, the command of the Israeli army still had to take into account the structural features of the body of most of the battalion’s fighters and develop special women's unloading vests for them. According to reviews of the "lynx" - very comfortable and functional. In addition, the program of physical fitness was also adjusted: the loads did not become less than in men, the very nature of the exercises and verification tests changed. There are no differences or indulgences for ladies in other combat training items.

In 2007, for the first time, full-fledged battalion exercises with live firing were held in Caracal, during which all of its companies confirmed the fighting category established for them - 07 rufi. Since then it has been happening annually. And in the winter of 2011, “lynx” took part in full-scale exercises of the Israeli army, where they showed themselves excellently and deserved the praise of the highest military command. Obviously, the battalion was prepared shortly before by Lieutenant Colonel Yakov Ben-Yakir, appointed by his commander, one of the best officers of the Israeli special forces, who had the richest combat experience behind him and several years headed the 933 special unit? infantry brigade "Nahal".

Female sergeants in "Caracal" is no longer a rarity. By the beginning of 2012, four female officers served in it. True, they all came to the battalion from other places. But in the same year, she completed a full course of study in an infantry officer school and returned to her native team in a new capacity as one of the “lynxes”. And the battalion operations officer, Captain Moran Elioz, went to advanced training at a prestigious military institution in the United States of America: according to some assumptions that appeared in the Israeli press, she is being prepared to replace the post of deputy battalion commander, or even the battalion commander. If this happens, she will become the first woman to be entrusted to lead the "sand cats" for all the short-lived history their existence. 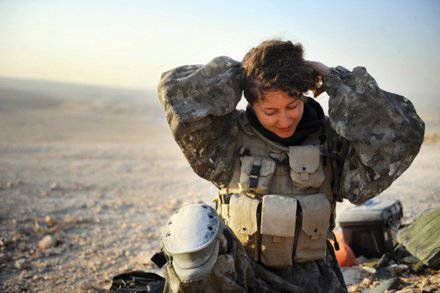 It is interesting to note that it was in Caracal that corporal Elinor Joseph served in 2009 – 2011 - the first Arab woman who expressed her desire to join the combat units of the Israel Defense Forces. She served with dignity and, in addition to the combat specialty, she graduated with honors from four-month medical orderly courses.

David Ben-Gurion once said: “Army service is the highest manifestation of civic duty. And as long as men and women are not equal in the right to fulfill this honorable duty, one cannot speak of their true equality. The military service of the daughters of Israel is one of the foundations of our state. ” Well, the current leaders of the country honor this covenant of one of the fathers? The founders of the Jewish state and consistently implement it. The fact of creation, existence and development of the “Karakal” battalion is the best confirmation of this.
Despite numerous skeptics, the current Israeli desert Amazons continue to actively participate in combat operations, gain experience, strengthen their reputation and increase their authority among their male colleagues. They, carrying daily heavy and dangerous military service, are no longer considered in Israel as an exotic flower in an army buttonhole, but are valued by the actual results of combat work, of which there are plenty.

But we must also pay tribute to the men of the Israeli army - they continue to be gentlemen: although “Karakal” is considered a combat unit, but behind the scenes the leadership of the IDF is trying to keep the women's battalion away from areas of real hostilities.
Still, women in military service are one thing, but in war they are another.