February 21 2014
10
Throughout stories small weapons one of the main ways of its development was to increase the rate of fire. For several centuries, the shooters had to use special tactics to compensate for the insufficient rate of fire, but a technical decision was required. Gunsmiths all over the world were engaged in the development of promising rapid-fire systems. So, in 1854, the British masters made an experimental sample called Treeby Chain Gun. This "chain gun", as expected, was supposed to increase the firepower of the rifle subunits.

In the design of the rifle Treeby Chain Gun, several original solutions were used to facilitate the loading process, as well as to improve the firing characteristics. The main advantage of the new model was the ability to make 14 shots in a relatively short period of time. The design of the gun was made in such a way that the shooter did not need after each shot to fill the powder and put a bullet in the barrel. For ease of use, it was proposed to place the 14 powder charges and 14 bullets into special chambers like the revolvers used in the drums.

The basis of the rifle Treeby Chain Gun was a kind of receiver of a modern weapon - the unit, inside which was located the trigger mechanism and part of the ammunition supply system. In the upper front part of the trunk was attached to the main part, in the rear - butt. The most important node of the system has become a chain feed system of cameras. 14 cylindrical chamber for gunpowder and bullets placed on the same chain, stretched on two gears. Each chamber was a cylinder with a tapered upper part and a bottom of a characteristic shape with a hole in the center. At the bottom of the chamber was supposed to install the primer. Because of this feature, the Treeby Chain Gun belongs to the class of blasting weapons.

The barrel of .54 caliber weapons (13,7 mm) had no rifling, it was made movable. In front of the receiver, there was a thread on which the barrel was attached. With the help of a special lever, the barrel could turn around its axis and move back and forth on the thread. Such a seemingly complex system was designed to seal the “chamber-trunk” system and block the movement of the chamber, ready to fire. In the upper part of the gun was a lever responsible for raising the firing mechanism and moving the chamber. 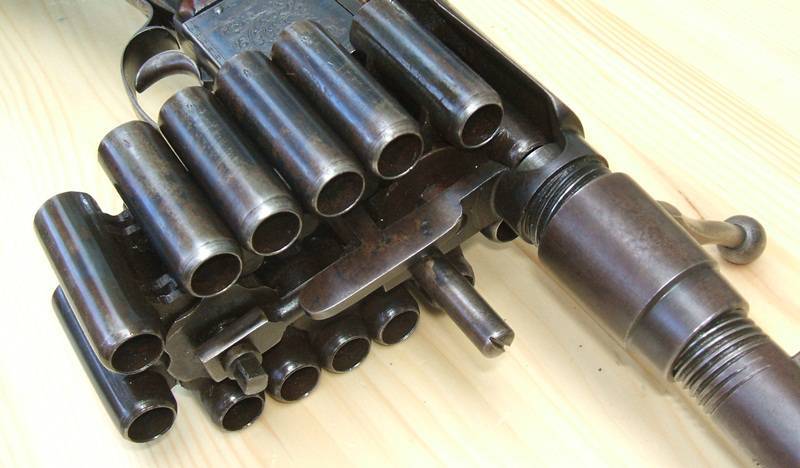 In preparation for firing rifles from the Treeby Chain Gun, the shooter had to fill the 14 chamber with gunpowder, place spherical bullets in them, and also install primers on their bottom. After that, the gun was ready to fire. To prepare for the shot was required to turn the lever up. At the same time the trunk itself, turning, shifted forward. The breech, going forward, unblocked the movement of the camera. With the help of the cocking lever, the shooter had to cock the trigger mechanism and lead the chamber with gunpowder and bullet to the barrel. Next, the barrel lever had to be turned all the way down. The trunk at the same time moved back and sat down on the chamber. In this way it was supposed to provide a sufficient level of sealing, center the chamber, and also exclude the possibility of a breakthrough of powder gases to other chambers.

After all these procedures, the Treeby Chain Gun was ready to fire. To aim the weapon at the target, the shooter had to use an open sight and a front sight. It is noteworthy that such an installation of sighting devices was a kind of fuse: if the shooter forgot to return the barrel to its original position, the sight and front sight shifted relative to the normal position and let you know about the error. The procedure with turning the barrel, leading the chamber and cocking the weapon needed to be repeated after each shot.

British gunsmiths produced two guns of the original design, which were soon transferred to the army for testing. The equipment of the British shooters of the time could not be called perfect, which is why the gun by the Treeby Chain Gun surprised and pleased them. The rate of fire of the new rifle was several times higher than that of the systems in service. However, unfortunately, the story did not retain the exact value of this parameter. 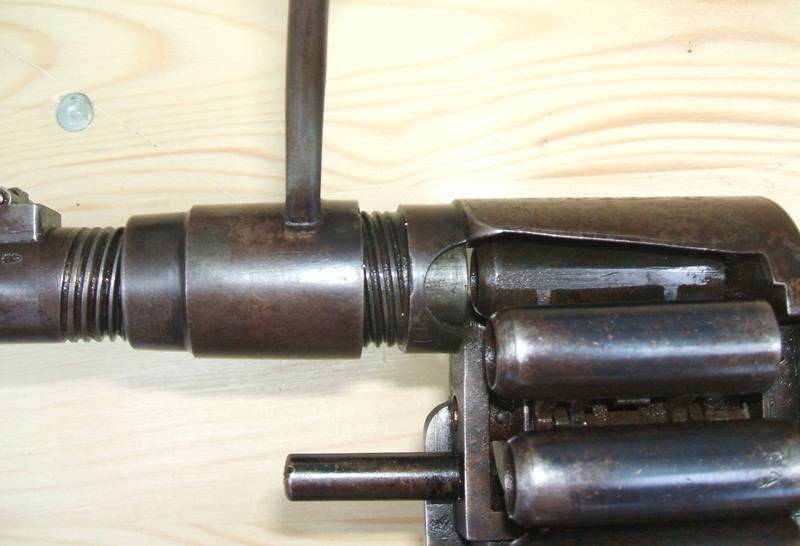 Despite the first impression, further testing of the capsule rifle Treeby Chain Gun showed that it is not without flaws. First of all, it was noted that the promising weapon does not have a forearm. This meant that the shooter could calmly make only a few first shots, after which he would have to hold a gun to the metal of the table, heated by firing. Installation of protection, in turn, was associated with some problems and design flaws. The second major problem "chain gun" has become a barrel bias system. Under the conditions of the battle, the shooter could simply not turn the barrel to the end, which threatened to break through the gases and, as a result, with injuries or ignition of gunpowder in other chambers.

After checking a promising gun, the British military decided not to use such a complicated, not very convenient and to some extent dangerous system. A few years after the tests of the Treeby Chain Gun, a new small arms appeared that used more advanced technologies that allowed for a higher rate of fire, such as a cartridge with a metal sleeve, etc. Both guns Treeby Chain Gun, used in the tests, survived to this day. One of them is in a private collection, and the second is stored in the museum of the city of Hampshire (UK). 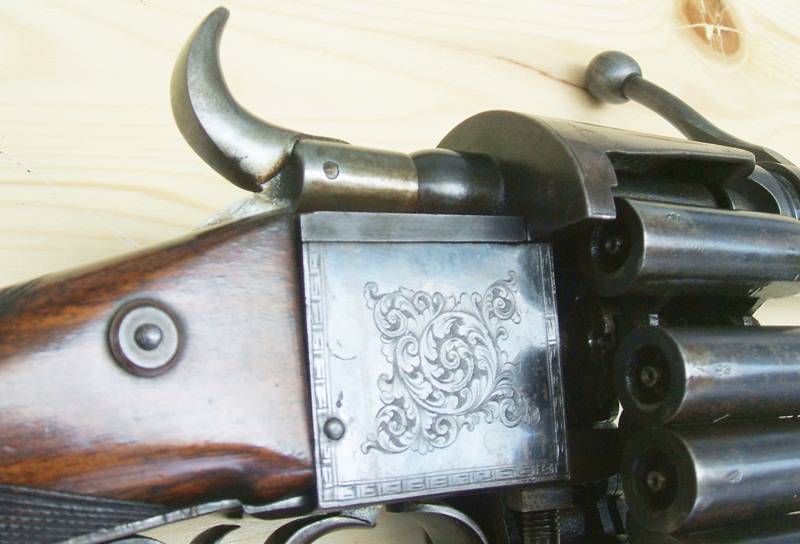