February 19 2014
31
The Second World War has become a true at times flourishing piston fighter. By the end of the war, each of the parties to the conflict had machines that were excellent in their flight characteristics and arming, which, however, very soon would have to cede the sky to their jet counterparts. One of the most advanced piston fighters of the second half of World War II as part of the United States Air Force was the North American P-51 Mustang. It was a long-range fighter, which proved to be excellent in battles, including when accompanied by armads of Allied bombers. It is not surprising that the Mustang became the basis for the development of new fighters, among which were very unusual models, for example, the F-82 Twin Mustang.

Already looking at the name of the aircraft, you can roughly imagine what this car looks like. The multi-purpose F-82 Twin Mustang fighter combines the 2 fuselage of a conventional single-engine Mustang. This double long-range fighter was the latest mass-produced piston fighter in stories US Air Force. In total, starting with the 1945 year, the X-NUMX F-272 fighter of various modifications was built. The aircraft were in service with the Air Force until the middle of the 82 year and managed to take part in the Korean War.

The first requirements for the new fighter, which then wore the designation P-82, were put forward in 1942 year. The emergence of a new fighter caused the urgent need to get a fighter, which could accompany strategic bombers during raids on objects in Germany and its allies and support in solving this problem fighter P-47 and P-51. The appearance in the US Air Force of a strategic bomber B-29 very sharply raised the question of the need to accompany him throughout the entire length of the route to the target. Even the latest models of the Mustang P-29 fighters could not always cope with providing cover for the B-51 bomber. 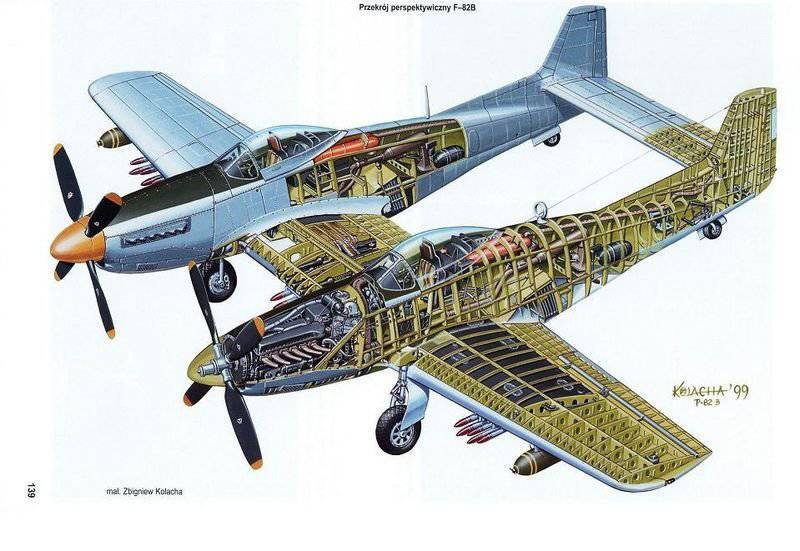 In addition, the use of single-engine fighters has demonstrated that during long flights, the load on pilots greatly increases. It was quite difficult to carry out in a tight fighter cockpit before the 8 watch, while driving the machine. When the pilots returned from such flights, they often could not leave the cockpit on their own. Therefore, the idea of ​​the appearance of a long-range fighter, in which there would be a place for the co-pilot. Taking this into account, the company North American put forward the idea to create a new long-range fighter, combining the fuselages of the two "Mustangs" with a common wing. Such a solution allowed to get a double fighter of interest to the military.

It should be noted that such developments were not American know-how. Perhaps the idea of ​​building such an aircraft arose under the influence of the development of Hitler's Germany. Researchers even note the fact that the first of the serial samples of the new American fighter wore the designation P-82Z, similarly designated similar machines in Germany - Bf 109Z or Not 111Z. However, later on, the Americans changed the name, renaming it into a more concise variant for the American classification system - P-82В. At the same time, North American had its own designation of this development - NA-120.

Already 7 January 1944 of the year from the US Army Air Force received an order to build four experienced fighter aircraft, which received the designation XP-82. Externally, the fuselages of these fighters resembled the P-51H, but they also had their own characteristics. Thus, their total length was increased immediately by 145 cm, thanks to the additional insertion before the tail. At the same time, the wing of the aircraft was a completely new design, which made it possible not only to increase the take-off weight of the long-range fighter, but also to increase the reserves of fuel located in its wing tanks. The center-plane of the aircraft, which combined the 2 fuselage of a conventional P-51 fighter, had flaps and could carry the 1-2 pylon. The fighter wing consoles were reinforced and could also carry an X-NUMX pylon each. Due to the appearance of a sufficiently strong inertia of the fighter in the management of roll, the engineer had to significantly increase the area of ​​the aileron. Thus, the ailerons of the aircraft became two-section, and the hinges used in them were designed for an increased level of loads. 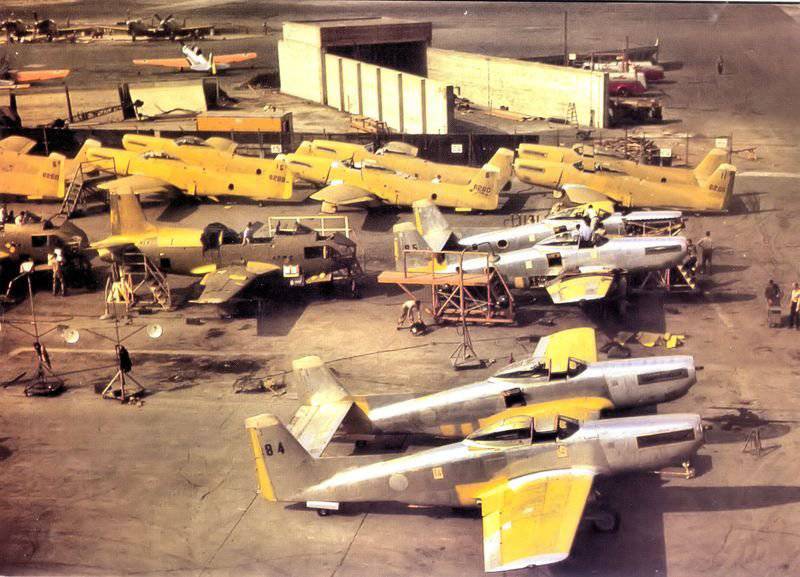 The fighter planned to equip the Packard Merlin V-12-1650 (right) and V-25-1650 (left) maximum power of each of them with the V-shaped 23-cylinder liquid-cooled engines (left). From each other, the engines differed in the direction of rotation of their screws. The right screw rotated counterclockwise, and the left screw clockwise. Due to this, it was possible to eliminate the unfolding and heeling moment during the operation of the aircraft engines. The fighter was equipped with propellers Aeroproducts. The main landing gear of the fighter was attached to the front spar of the wing on the outside of each of the fuselages, the landing gear were retractable, they were retracted inside the fuselage and fender of the car.

It is worth noting that the management of the fighter was kept in both cabins, but in different volumes. The cockpit lanterns were drop-shaped; they were modeled on the P-51H fighter. The pilot was located in the left cockpit of the fighter; it was here that the complete set of instrumentation for controlling the fighter and the engines was located. In the right cabin of the aircraft was located the navigator - the co-pilot, who had a reduced set of equipment that was intended only for temporary control.

The main armament of the fighter was the Browning MG 12,7-53 2 machine guns, all on the plane were 6 such machine guns. The ammunition of each of them was 300 ammunition. All machine guns were mounted in the central section of the wing of the machine. At the same time, the fighter’s armament could be easily strengthened by installing a container with 8x12,7-mm machine guns under the central wing section. In addition, the aircraft could carry a bomb load and unguided missiles for ground attack purposes. 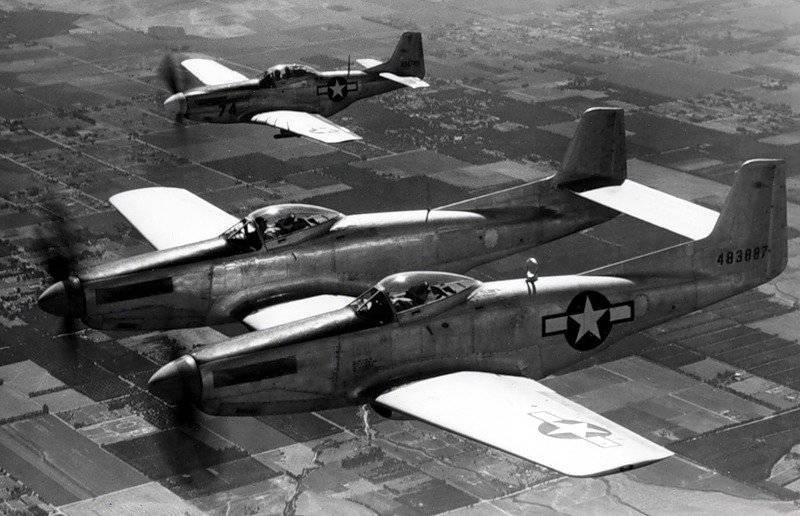 The first XP-82 prototypes were able to take to the air only 6 July 1945, that is, too late to have time to take part in the battles of the Second World War. This was the reason that the initial order for 500 machines was reduced to 270 fighters. In the US Air Force, the Twin Mustang replaced the P-61 Black Widow fighter as the main night fighter. In addition, the fighter was also involved in solving its initial tasks - escort escort B-29, B-50 and B-36 strategic bomber.

In February, the F-1947B "Betty Joe" fighter (serial number 82-44) managed to make a nonstop flight Honolulu - New York (approximately 65168 thousands of miles). The fighter managed to make this flight in 5 hours 14 minutes. The aircraft in this flight was piloted by John Ard and Robert Tucker. This record flight range for a piston fighter has not yet been beaten by anyone.

The fighter did not have time to take part in World War II, but he took part in the Korean war that started in 1950. The war on the Korean Peninsula began on June 25 of the year 1950. F-82 Twin Mustang fighters, which were based on Japanese air bases, almost immediately began to take part in battles. It is worth noting that at that time they were the only fighters that were able, operating from air bases in Japan, to cover almost the entire combat area. Already 27 June, one F-82G fighter, part of the 68 Fighter Squadron, under the command of Lieutenant William Hudson, as well as navigator Lieutenant Kerl Fraser, shot down North Korea’s Yak-7U in air combat, according to other data, it was Yak-XUMUMNUMBER This was the first victory of the US Air Force in the Korean War. Later that day, another F-11G from the 82 Fighter Squadron under the command of Major James Little shot down the Yak-339 fighter in combat. 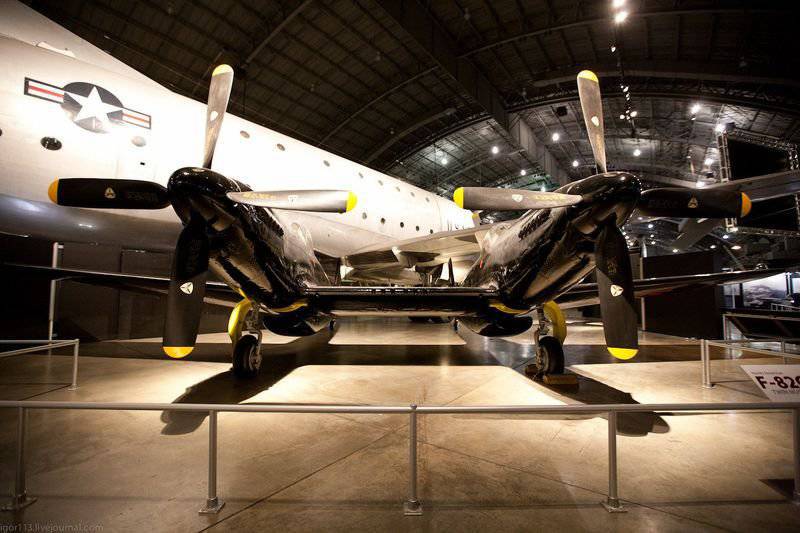 The Twin Mustang fighters in service with the United States Air Force were quite actively used during the hostilities in Korea until November 1951, covering strategic bombers and storming ground troops. However, this machine even compared to its predecessor, the P-51 still performed a secondary role. There were difficulties with their use, there was a shortage of spare parts. When production of the F-1948 fighter jets was stopped in 82, the United States Air Force didn’t even bother to order sets of spare parts for their subsequent operation. As a result, by February 1952, all the F-82 Twin Mustang aircraft were withdrawn from the combat units. Despite the rather limited participation in the hostilities in Korea, the F-82 fighters managed to write down their own 20 destroyed enemy aircraft (with only 4 destroyed in the air and 16 on the ground).