The project "Ash" on the background of the state of industry

February 18 2014
39
It is no secret that the events of recent decades have negatively affected the domestic defense industry and, in particular, shipbuilding. The industry has lost a lot of valuable personnel and part of important enterprises. In recent years, attempts have been made to rectify this situation, but the state of industry is still poor. The complexity of the current situation is clearly shown by the multi-purpose nuclear submarine K-560 Severodvinsk. This submarine missile carrier was laid back in December 1993, and the transfer the fleet took place only in the last days of the past, 2013. Thus, the construction and testing of the new submarine took 20 years. 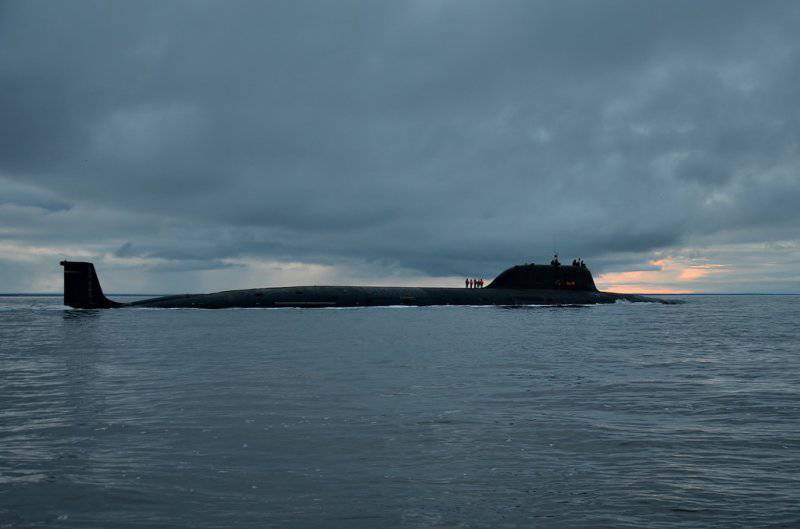 Fortunately, the main work on the head submarine of the 885 “Ash” project has been completed, and it has been accepted for trial operation. In the near future, industry and the military will eliminate the remaining shortcomings, after which Severodvinsk will become a full-fledged combat unit of the Northern Fleet. The fact that the nuclear submarine "Severodvinsk" will be in trial operation for some time was announced at the very end of last year, when the military signed an acceptance certificate for it. It soon became known that the new submarine has some problems with a number of systems that are planned to be eliminated in the very near future. After that, the submarine can be entered into the combat structure of the Navy of Russia.

On January 23, the ITAR-TASS news agency published new information about the Severodvinsk submarine. With reference to the representative of the defense industry, associated with shipbuilding, it was claimed that the head submarine of the project "Ash" would be accepted into the fleet combat no earlier than the second half of 2014. The reason for this shift in timing is the need for additional verification of a number of onboard systems. According to an industry source, the new submarine will have to test some systems at sea, including launching Caliber missiles from a submerged position. In addition, it is planned to test the operation of hydroacoustic, navigation and other systems. One of the objectives of the new test will be an additional reduction in the noise level produced by the submarine. At present, these parameters of the submarine "Severodvinsk" does not meet the requirements, although it is ahead of other submarines of the Russian fleet.

To conduct additional tests will take several more months. During this time, the submarine "Severodvinsk" must make several outlets at sea. Due to the peculiarities of the climate of the Barents Sea, trials will begin no earlier than the beginning of summer, which will have an appropriate effect on the timing of the submarine’s deployment to the fleet. Because of this, according to an ITAR-TASS news agency source, the raising of the St. Andrew’s flag on a new submarine will take place no earlier than September. However, he did not rule out the possibility of some problems, because of which this event will be postponed to November or even December.

Thus, until the autumn of this year (at best), the Russian Navy will not be able to replenish its combat strength with a new nuclear submarine. Submarine "Severodvinsk" even after the end of the test has a number of problems that now need to be fixed. To justify the shipbuilders and suppliers of various equipment, it should be said that the specific climate of the northern regions will affect the timing of additional work and testing. Currently, the proposed test area in the Barents Sea is covered with ice, which is why seafarers and shipbuilders will have to wait for warming. From the words of the source ITAR-TASS, it follows that the ice will add to the time required for testing and modifications, at least a few months.

It turns out that the nuclear submarine K-560 "Severodvinsk" can become a full-fledged combat unit of the Northern Fleet only by the end of this year, i.e. almost a year after the signing of the acceptance certificate and acceptance into trial operation. In the light of the time it took to build this submarine, such a shift in terms does not look outstanding, but it cannot be recognized as useful for the fleet.

According to current plans, in the foreseeable future, domestic shipbuilding should hand over a total of eight submarines of the 885 and 885М projects to the fleet. The first of them has already been handed over to the military, but is in trial operation. Two other submarines of the project "Ash" (K-561 "Kazan" and K-573 "Novosibirsk") are still on the stocks. As it became known a few days ago, this year the construction of the fourth submarine project will start.

February 7 General Director of the Sevmash enterprise M. Budnichenko told about the plans for this year. At the Sevmash plant, which is building nuclear submarines, this year two strategic submarines of the Borey 955 project, one Yasen submarine and one special-purpose submarine will be laid. It should be noted that the planned submarine, like the Kazan and Novosibirsk being built, will be related to the updated 885М project.

Existing plans for the construction of submarines of 885 and 885 projects look interesting and optimistic. There is every reason to believe that by the 2020, the Russian Navy will indeed be able to receive eight planned submarines. However, the situation with the head boat "Severodvinsk" may be the reason for doubts about such a completion of the construction program "Ash". The time of launching and transferring the Severodvinsk submarine to the fleet was repeatedly shifted, and after the acceptance certificate was signed it was not included in the operational strength of the Navy, but was put into trial operation. So far, no one can rule out an unpleasant scenario, in which the remaining seven submarines of the new project will repeat the fate of the lead ship.

As we see, domestic shipbuilding gradually restores its former potential and builds new nuclear submarines. It should be noted that the defense industry still has a lot of problems, such as lack of experienced personnel or outdated equipment. Nevertheless, certain progress in this direction already exists and the first results of the new approach to work are already noticeable. According to current plans, from 2011 to 2020 years, over 20 trillion rubles will be spent on the purchase of new weapons and military equipment, as well as on the modernization of defense enterprises. The purpose of such financial injections is a radical update. weapons and equipment of the armed forces, as well as the modernization of production capacity of the industry.