February 17 2014
85
One of the main "stars" ended the other day 8-th International Exhibition of Land and Naval Armaments Defexpo India 2014 (New Delhi, India) was the unique Russian automatic gearbox. It shoots equally well both on land and under water. In no other country, except Russia, there is even nothing close. 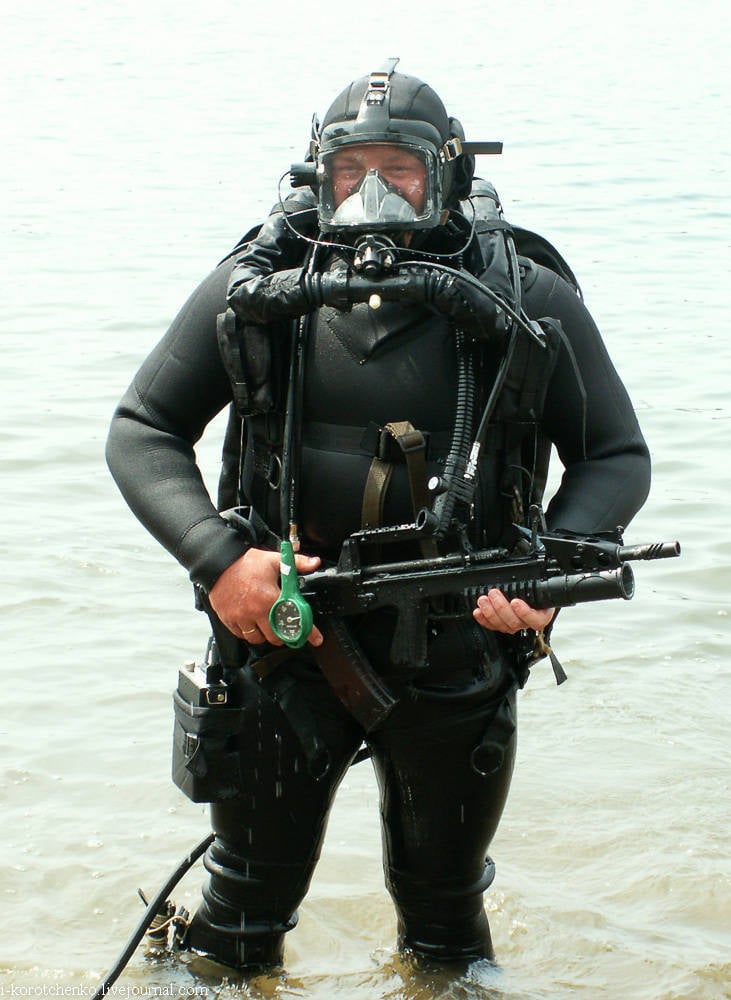 The most effective means of dealing with the enemy under water is a knife. However, throughout the 20 century, gunsmiths from all over the world tried to adapt projectiles to work underwater. weapon. At the same time, Western arms companies rather quickly abandoned the idea of ​​using firearms in an underwater fight, concentrating on developing all kinds of mechanical harpoons, which were either set in motion by compressed air or were underwater crossbows. Further, perhaps, only the German company Heckler und Koch, which developed in 70-ies of the last century, the P11 five-pistol caliber 7,62 mm, advanced. He quite effectively shot under water at a distance of up to 15 meters, on the air - up to 30 meters, so this gun quickly became the standard weapon of submarine combat swimmers of the armed forces of Germany, Norway, Great Britain, Italy, the United States and other countries that were opposing the Soviet Union at that moment . At the same time, electric current was used to ignite Р11 cartridges (two mini-accumulators of 9 volts were placed in the sealed pistol grip).

Soviet gunsmiths were more insistent. By 1975, they had developed both an underwater gun (SPP-1) and a special underwater submachine gun (APS-5), which are still the standard armament of combat swimmers' units of the Russian Armed Forces. For that time, these were revolutionary products. The bullet fired from the SPP kept its destructive power under water up to 17 meters, and from the MPS-5 it was possible to hit an underwater target located in 25 meters from the shooter.

However, during the operation of the APS-5, it showed serious shortcomings. The main one is low survivability. In accordance with the specifications, the machine gun was designed for 2 thousand shots under water and only 180 shots on land. “The fact is that the form of the 5,66-mm cartridge, powder charge, the ballistics of the bullet flight, the operation of the automation are designed for normal functioning only under water. When the shooter comes to the land, water flows out of the receiver of the machine gun. When firing in "unusual" conditions, the slide frame moves much faster, and the receiver simply does not withstand increased loads. Approximately it is just enough for 180 shots, ”the doctor of technical sciences, professor Yury Danilov explained to journalists in due time. In addition, according to Professor Danilov, the APS-5 often “suffered” delays due to the fact that two or even three cartridges were often fed to his chamber. And it was impossible to attach any aiming devices and muzzle devices to it. Therefore, de facto combat swimmers had to duplicate the APS-5 with purely “ground” weapons - as a rule, with the AK-74М.

At the same time, both Russian and international experience in the use of marine special forces suggests that in 80-90% the fighters of these units perform tasks on land. Therefore, it became necessary to have a special multipurpose weapon in these units, which would work equally well in air and in aquatic environments. Moreover, in terms of shooting efficiency (accuracy, accuracy, armor penetration) such a machine on land would not be inferior to X-NUMX-mm AK-5,45, AK-74, and under water - 105-mm APS. And such weapons were created by specialists of the Tula Instrument Engineering Design Bureau (Tula KBP).

Specialists of the Tula KBP approached the problem of creating a new two-medium automaton from two sides. On the one hand, since then, a new cartridge of the caliber 5.45 has been created, which could be effectively used under water. He received the name 5.45 PSP (special underwater cartridge). At the same time, the designers were given the task of putting new ammunition for underwater combat into the regular shop of the machine for land firing. Because the APS-5 used needle-shaped bullets with a length of more than 12 cm, which, when applied on land, were inconvenient and expensive.

“Many designers and testers of the branch of the Tula KBP, the Central Design Research Bureau of Sporting and Hunting Weapons (TsKIB SOOO), who have already had experience in finalizing the well-known pistol cartridge and the pistol itself, took part in creating the new underwater patrons. Due to their successful work, the task was performed and a new underwater cartridge was developed. One of the main conditions for the development of a new cartridge was the condition to make a new cartridge in the dimensions of the standard 5,45 caliber automatic cartridge. To stabilize the flight of a shorter bullet in the water, a bullet design was implemented with a cavitator in the bow. The flat nose of a bullet creates around itself a cavitational cavity (air bubble). As a result, the fired bullet does not tumble in the water, but behaves steadily. Thus, a two-medium automaton in sushi conditions shoots regular 5.45 caliber cartridges, and the 5.45 PSP cartridges (special underwater cartridge) are used for water, ”says Nikolai Komarov, head of the foreign economic relations department of the Tula KBP branch — TsKIB SOOO. 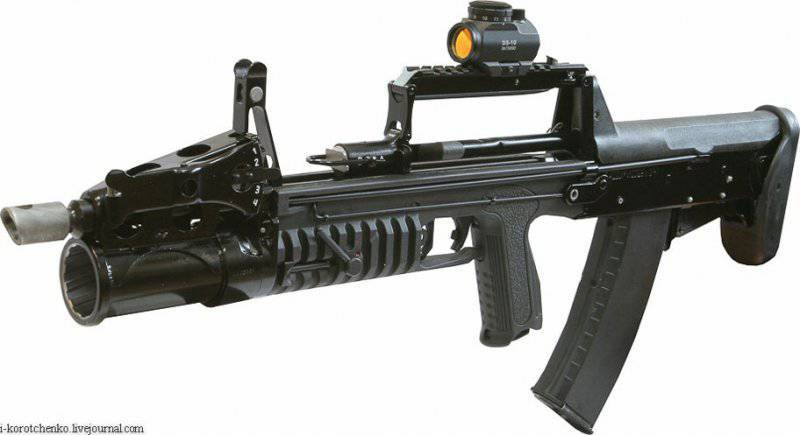 In parallel with the creation of a new patron, at the end of the 90 of the last century, on the initiative of the famous designer Vasily Petrovich Griazev, work began on the creation of the machine gun itself. Initially, the Tula KBP developed it on its own initiative with its own funds. However, then the Russian Ministry of Defense joined the financing of these works, which issued an official order for the creation of a new unique machine gun for fighting in two environments, and for the development of special cartridges for it.

“It was a hard and painstaking job. It was based on a Kalashnikov assault rifle, or rather, three modifications of it. Until now, this machine has no analogues in the world for its reliability and ballistic characteristics. In developing the ADF, a bullpup arrangement was used, in which part of the barrel and the magazine are located behind the trigger mechanism, which made it possible to reduce the length of the weapon itself while maintaining the barrel length. This is a very important condition, as the movement, overcoming obstacles and the conduct of hostilities in the aquatic environment has special difficulties. It was necessary to reduce the size of the weapon and unload the fighter as much as possible. The design, types of coverage were changed, the air-to-water mode switch was introduced. The unique features of the two-medium ADS machine should also include the minimum gas content after the shot, which is achieved due to the fact that the sleeve flies forward at a small angle, and not to the side, as in the usual bullpup layout. The submachine gun assumes firing both from the right and from the left shoulder, without requiring additional reinstallation of the equipment. It is also equipped with special nozzles for low-noise shooting, a safety device and a built-in grenade launcher of a modular design with a gas engine. The Picatinny plate is brought upwards with rigid fastening and can be used as a handle for carrying weapons, ”Nikolai Komarov describes the new product. 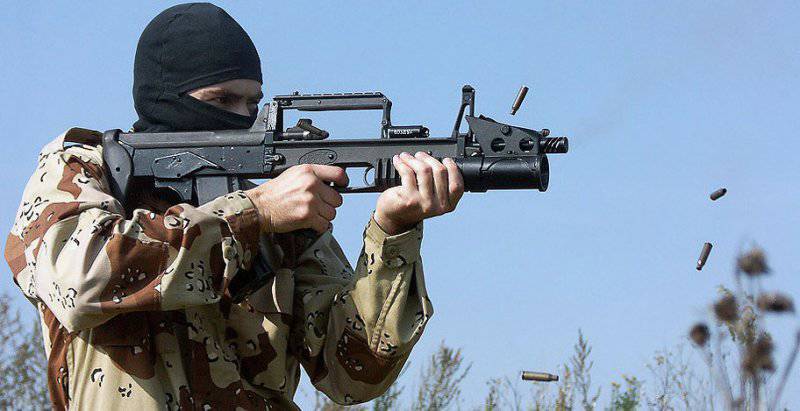 For testing the design of ammunition and automaton in TsKIB SOOO was specially designed and installed in the test station test stand for shooting in water. For the past few years, prototypes of the new machine gun and cartridges have been tested in special military units in the North and the Far East of our country, on the Black Sea. Tests have shown that on land, the ADS is not inferior in its effectiveness to the standard AK-74 and AK-74U, and in the water it surpasses the automatic MPS. Therefore, in 2013, the ADF was adopted by the Russian Armed Forces. In addition to the machine itself, sea swimmers are waiting for new scuba diving equipment, breathing equipment, new diving suits, samples of which have also been tested in recent years.

It is assumed that, first of all, the ADF machine gun will be used in the units of the naval special forces. However, according to the developers, it aroused interest among representatives of the Ministry of Internal Affairs and the FSB. The machine gun itself will apparently be produced by the Tula KBP itself, which was recently named after the famous Russian gunsmith Academician Arkady Georgievich Shipunov.

The two-medium ADS complex is a universal weapon, providing for the first time the possibility of hitting the enemy, both on land with standard 5,45x39 mm cartridges and 40 mm grenade launchers, and underwater with special underwater cartridges. The use of ADF by special purpose fighters, combining the capabilities of standard and special underwater submachine guns, makes it possible to almost halve the weight of portable weapons.

The integrated grenade launcher for a caseless grenade greatly expands the fire capabilities of the weapon and surpasses breech-like counterparts in practical rate of fire. The layout of the bullpup ensured a reduction in the overall length of the weapon while maintaining its combat characteristics.

Reflection of a spent cartridge case makes it convenient to shoot from the right and left shoulders, and also reduces gas pollution in the area of ​​the shooter’s face. Increased combat readiness is provided by the presence of an automatic fuse. Closed receiver increases the reliability of the weapon in difficult conditions.

The ADF is equipped with a universal "picatinny" type bar for mounting various aiming devices. It can be completed with a low-noise firing device and a nozzle for single firing.