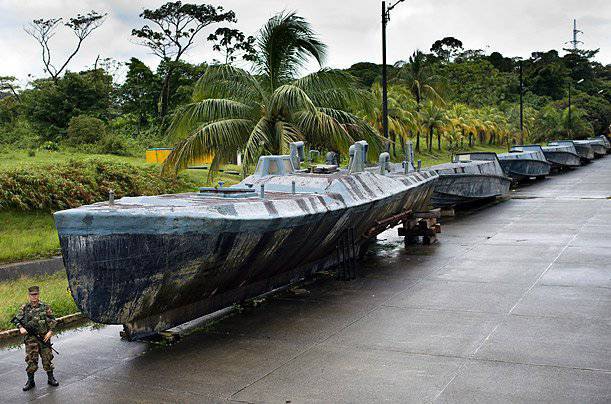 - Senor Escobar had great confidence in you. This load is more expensive than you, your home and your family combined.

“Oh, rest assured, rest assured,” Senor Garcia began to frown in fright, “preparation for the operation took a long twenty months, but the transition itself will take less than twenty days. Everything is ready with us. Recruited crew of the most experienced people on the coast.

“Is that your Ballena?”

Representatives of the drug cartel looked at each other and stared in bewilderment at the blue-green oblong design that looked like a dead whale.

“Eres un maldito comekosos,” the senior visitor said shortly, lifted his trouser leg, and unbuttoned his holster with a pistol.

- No, please listen, seniors! - Old Garcia in despair threw up his hands to heaven. - In the name of all the saints! Work done for the glory. This is a super ship that can reach California in three weeks. The deck of this boat rises just a few centimeters above the water - it is practically undetectable by Coast Guard radars. "Ballen" will not hear the sonar. Externally, it looks like a large shark or whale, and in a storm completely merges with the ocean. Inside installed an automatic navigation system. Two diesel engines disperse the boat in a semi-submerged state to six knots. Cooled exhaust. Folding design! The vessel can be secretly delivered by three trucks to any point of the coast for loading and sailing. 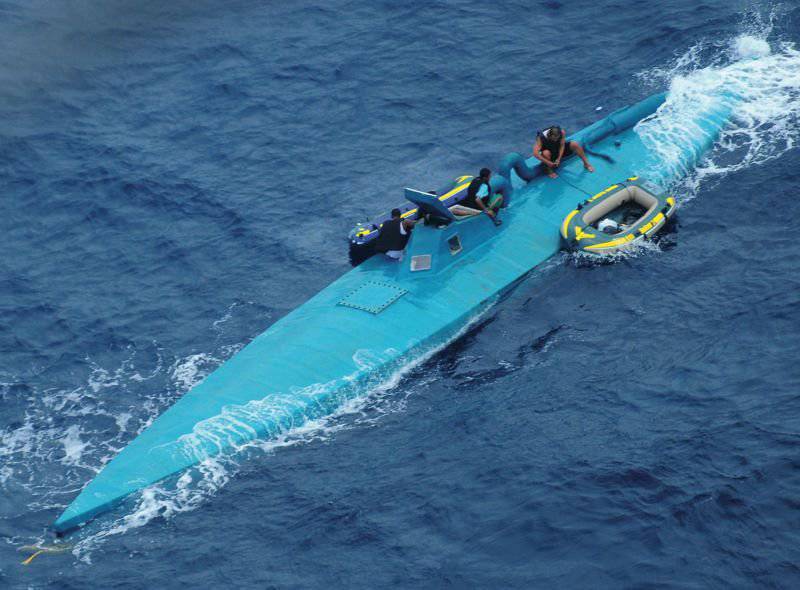 - Your ###! - Senior Senior enthusiastically pulled on a cigar and spat on the white beach sand. - This is the coolest thing I've ever seen.

“When Ballena gets to the US coast,” the mechanic Garcia smiled sadly, “the baby will have to be flooded.” The sea will forever absorb my one-time masterpiece.

- Finish gab. Prepare the "Ballen" to be launched.

- There is no need to waste time. Call your amigos, load 10 tons of powder. The boat should go to sea before dawn.

... Alas, hapless seafarers failed to get to California. 23 August 2007, a self-made, semi-submerged ship, packed with cocaine, was intercepted by a US Coast Guard corvette 120 miles west of the Mexican coast. 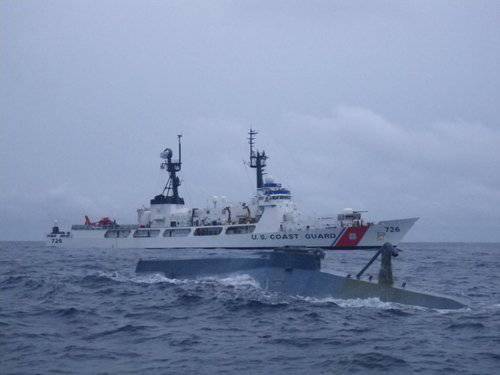 Repin's painting "Sailed" - rowed all night, but they forgot to untie the boat! USCGC Midgett Coast Guard Cutter Welcomes More Sailors
- Not! - yelled old Garcia with his hands tied, when lumps of mud fell on his head. - I know another way: you can tow the capsule behind the stern of a conventional trawler. So it will be generally imperceptible ...

But no one listened to him. Heart-rending screams gradually subsided under a thick layer of earth: amigo did not justify the trust of Señor Escobar.

According to official data, the volume of drug traffic from Colombia to North America is 550 tons of cocaine per year. Two thirds of all shipments go across the Pacific Ocean on home-made drug submarines and semi-submerged ships. News about the discovery of another “submarine” wreck off the coast of Mexico or the United States is no longer surprising to official authorities. More than 80 cases of such “transportation” of cocaine are registered annually. The transcontinental scheme with “white death” supplies works like a clock.

Each discovered sample of vehicles of drug couriers amazes experts with its sophisticated imagination and technical perfection. The local Colombian Kulibins thought through every detail: modular design, air conditioning system, periscopes, night vision cameras, electrochemical protection of the hull from corrosion, a radio station, inertial navigation aids and autopilot, the crew of the 2-3 man, the range of the order of 5000 km! 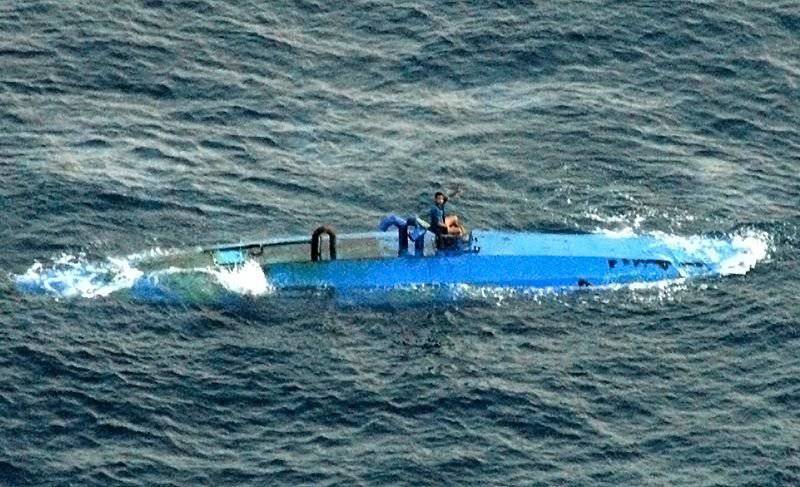 Mini submarines are not amenable to effective detection: their background noise is too low. The semi-submerged body made of fiberglass is not traced by radars and is difficult to detect visually against the background of ocean waves. The most advanced of them are able to dive a few meters deep, imitating the behavior of whales, whose migration routes just run along the west coast of Mexico and the United States. A whole supply chain is deployed along the route of the narcosubmarin - fishing boats and small yachts scurrying around in the ocean that provide the boat with fuel, fresh water and food. 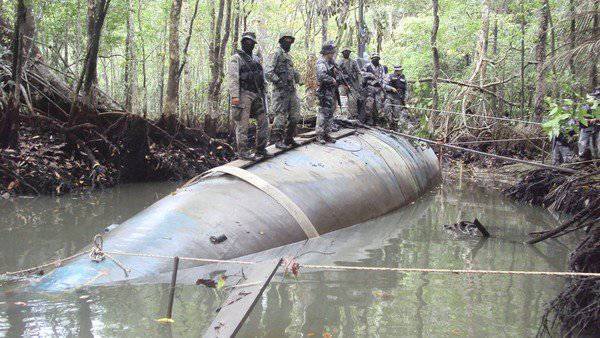 The cost of building one submarine is estimated at several hundred thousand dollars ("advanced" samples cost two million and more) - and such a "boat" will certainly flood at the end of the route. A “crew” recruited from local fishermen will receive an average of three thousand dollars per person at the end of the voyage. But the end justifies the means: for its first and only successful voyage, the boat delivers a “cargo” worth about a billion dollars to the coast of North America!

Like the rest of life, drug traffic is subject to the influence of new technologies. Not so long ago, the US Coast Guard issued a disturbing statement about the appearance of unmanned (!) Sea vehicles intended to deliver drugs across the ocean. 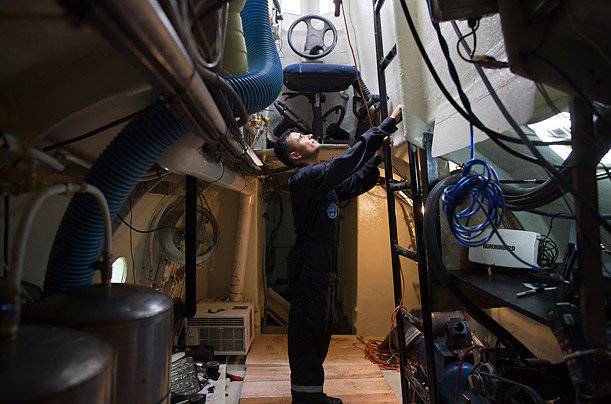 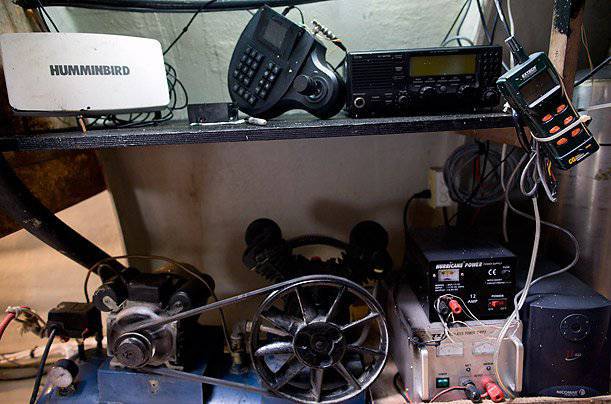 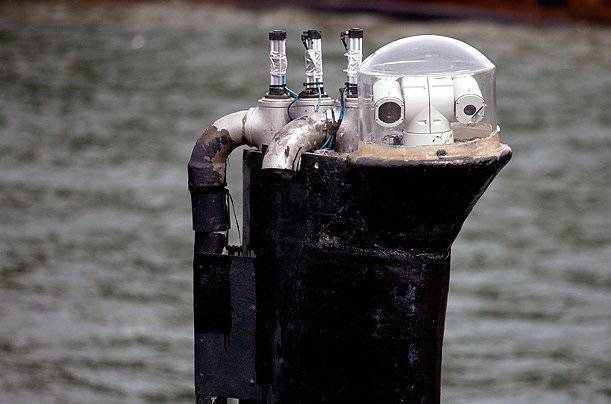 Despite the apparent absurdity of the submerged boats, “balancing” on the border of two environments, they are finding more and more success with customers, and, therefore, the idea is not as stupid as it is commonly believed. A low-seating vessel with a minimum side height demonstrates moderate secrecy combined with a minimum cost. The most suitable tool for conducting covert operations with a criminal bias.

However, many drug cartels prefer to work in the old fashioned way: a towed cocaine capsule is attached to a trawler or tourist yacht and quietly set off to the shores of the United States, without the slightest suspicion of the true purpose of the voyage. At the slightest danger, the crew records the coordinates and cuts the towline (some of the “torpedoes” are specially equipped with a radio beacon in case of such force majeure). After passing the inspection, the vessel will return to the specified point, scuba divers will find a “torpedo” in the shallow water and continue their journey to their destination.

However, the scope of semi-submerged boats is not limited to South America. On the other side of the Earth craftsmen are building no less interesting "masterpieces".

In the 1983 year, as a result of the next military clash off the coast of the Korean Peninsula in the hands of the South Korean Navy was an unusual boat "Racoon". Light 9-meter construction made of wood and plastic with a displacement of 5 tons, capable of changing its own draft, almost completely hiding under water. The speed of the boat on the surface reached 40 nodes, in the semi-submerged state - 12 nodes. The purpose of the strange boat is the covert transfer of a diversionary group of five with a personal weapons and equipment to the coast of the enemy.

Nakhodka greatly alarmed the South Korean military, forcing the existing concepts of coastal protection to be revised. In the absence of high-tech weapons, full-fledged air forces and naval forces of the DPRK, they relied on special forces - hordes of fanatical “ninjas” with AK-74, perfected martial arts techniques and steel faith in victory. Here the fleet of numerous semi-submerged boats came in handy! 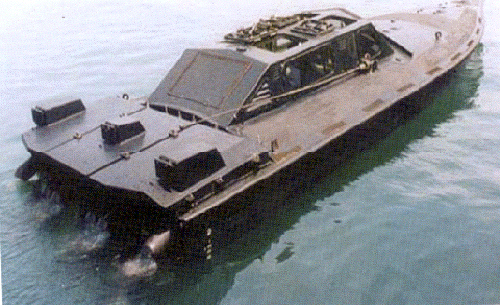 North Korean boat type SP-10 (SILC)
"Racoon" (or its more modern versions of the SP-10, Taedong-B or I-SILC) cost mere pennies compared to modern warships. At the same time, they have a good secrecy, allowing numerous special forces detachments to secretly penetrate the territory of South Korea and Japan.

Despite all their primitiveness, such means are a truly serious threat: to effectively counter half-submerged boats, the enemy will have to spend disproportionately large resources. And it’s far from the fact that the efforts will lead to the desired result - just look at the situation with the breakthrough of miniature narosubmarin to the coast of North America.

The idea of ​​semi-submerged boats was appreciated outside of North Korea. In 1996, two such boats manufactured by the DPRK purchased Vietnam. In 2002, another batch of weapons consisting of two mini-submarines and three semi-submerged boats ("Taedong-B and C") was delivered to Iran, which caused alarm to the US Navy. 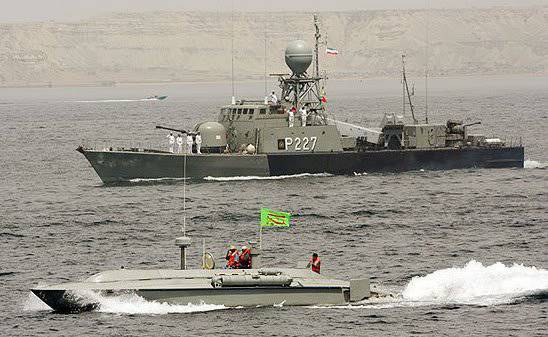 18 December 1998, off the coast of the Korean Peninsula, was followed by another find: at sea, in 150 km southwest of Pusan, a new boat, the improved design Improved-SILC (I-SILC), was discovered. Nearby in the water was the body of a North Korean sailor (most likely, there was a short fire contact, which the official press release tactfully kept silent about: the boat of the North Korean Navy accidentally hit the South Korean frigate).

The modern modification of semi-submerged boats is capable of carrying two small-sized 324-mm torpedoes, which makes it possible to use them not only as sabotage, but also as shock weapons in the coastal zone. 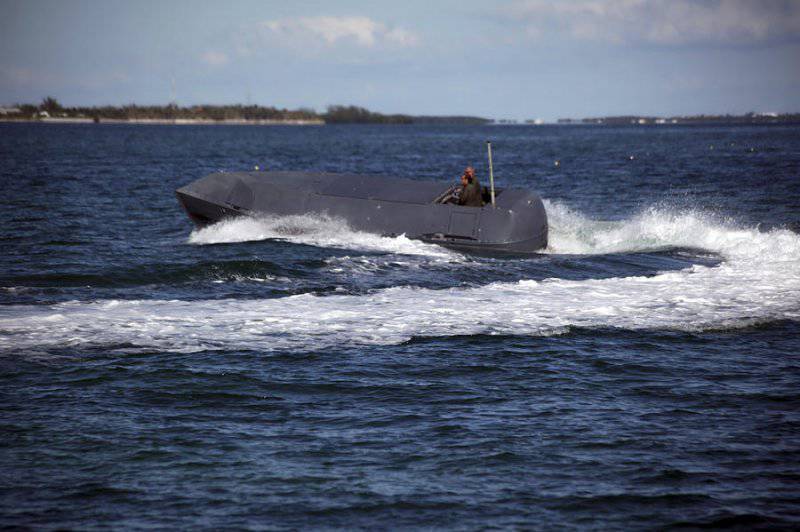 Multi Role Combat Craft (MRCC)
It is not only rogue countries that are engaged in the creation of semi-submerged boats for the covert transfer of special forces. The idea aroused interest in the USA, where the MRCC and Sea Lion projects were developed (8-local landing craft with two inflatable boats in the aft compartment). Sweden has its own designs (project SDV) and Russia (diving boat DCE Seek Carrier 8 with a payload of 1200 kg).

If it comes to Russia, then our "Kulibin" is not equal - the question of creating semi-submerged hydrofoil missile boats (!) Was considered in our country as early as the 60 years (the 1231 project). The main difficulty consisted in combining the requirements for a light speed boat with a heavy waterproof hull for scuba diving. The question arose of the need to build such a large and technically complex ship in such an unusual scheme, suitable only for light boats of smugglers and saboteurs. In the end, the arguments of common sense prevailed, and further work on 1231 Ave was refused.

Project 1231 experienced small sinking rocket ship.
Surface displacement 400 tons. The speed at the surface position of 38 nodes. Armament - 2-4 PKR П-25
At the naval cabin Euronavale-2010, the French concern DCNS presented a similar concept of the light semi-submerged corvette SMX-25, created using modern technologies. However, despite its high secrecy and strange appearance, the SMX-25 was left unattended - corvettes, by definition, are designed to carry out sentinel services near their native shores. And no one is going to bother much about their design.

It should be noted that all projects of low-seating ships and boats go back to a single ancestor - the legendary battleship USS Monitor, created during the Civil War in the United States. The height of the “Monitor” was just the 0,6 meter, which made the ship difficult to detect and hardly vulnerable to enemy artillery. However, effective on the rivers and in the coastal zone, the monitors turned out to be unsuitable for conducting combat operations at sea. Waves flooded the ventilation pipes, gradually filling the ship with water and sending it to the bottom.

A low-hybrid hybrid scheme is not suitable for large ships, but is quite successful in artisanal conditions. What demonstrates the undoubted commercial success of semi-submerged boats from smugglers and sea lions. 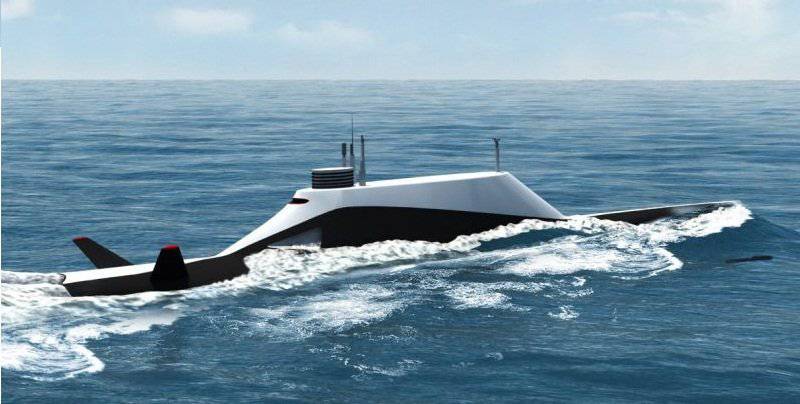