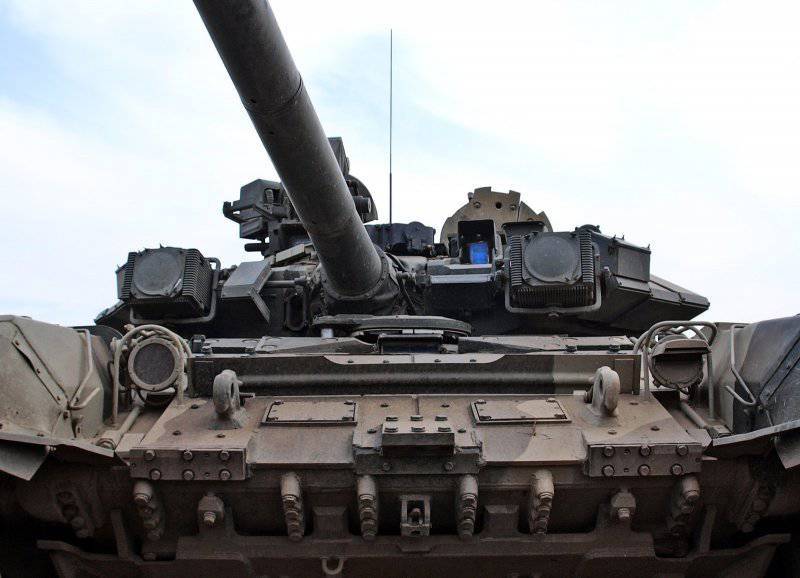 During the recent Defexpo 2014 exhibition, held in New Delhi (India), representatives of the Russian defense industry invited the Indian military to continue their cooperation in updating armored forces. Indian side proposed a modernization project tanks T-72, providing for the use of the modernized complex of active protection (KAZ) "Arena-E". The use of this system, it is alleged, will significantly increase the combat capabilities of existing armored vehicles.

In late January, ITAR-TASS, citing a representative of the corporation Uralvagonzavod, announced plans for the Russian defense industry regarding the upcoming Defexpo-2014 exhibition. The source said that the corporation "Uralvagonzavod" intends to offer the Indian Ministry of Defense just two options for upgrading the main tanks T-72. Currently, the Indian military exploits more than 2400 tanks of this model, which should accordingly affect the interest in the modernization projects of such equipment.

According to ITAR-TASS, the first modernization project of the T-72 tank, which India was supposed to offer, envisages equipping the tank with a number of additional means of protection. With these tools, the T-72 tank will be able to more effectively conduct combat operations in urban environments. Declared an increased level of protection against various anti-tank weapons, including against explosive devices. The second proposal is to equip the tanks with the active protection complex "Arena-E" in the new modified version.

KAZ "Arena-E" is designed to protect the tank from various means of destruction: anti-tank missiles and jet grenades. The equipment of the complex automatically monitors its surroundings and, if necessary, gives a command to shoot protective ammunition. The latter, undermining the right distance from the tank, strikes a grenade or a rocket with a directed stream of fragments. The Arena-E complex is widely known and regularly demonstrated at various exhibitions.

Last fall, at the Russian Arms Expo-2013 exhibition in Nizhny Tagil, Kolomna Engineering Design Bureau (KBM), which developed the Arena complex, demonstrated its new modification. Due to the use of the new element base and electronic components, this modification has smaller dimensions in comparison with the previous ones. This simplifies the installation of complex systems on tanks of various types of Russian production. In addition, the division of the complex into several modules of relatively small size allows them to equip not only tanks, but also armored vehicles of other classes. In the future, it is planned to create modifications suitable for mounting on any domestic armored vehicle.

Small dimensions and weight of the modernized complex were clearly demonstrated at the Nizhny Tagil exhibition. At the exhibition site was demonstrated tank T-72, equipped with the latest version of KAZ "Arena-E". According to representatives of the KBM, not all visitors to the exhibition were able to notice on the tank the blocks of the active protection complex. A considerable part of the specialists and amateurs of military equipment was surprised to learn about the presence of the Arena-E complex from an advertising tablet standing near the tank.

The equipment of KAZ Arena-E, independently and without operator participation, is able to observe a sector of 270 ° width in azimuth and track the appearance of potentially dangerous targets moving towards the protected tank. Target detection range - 50 meters. The performance of automation and the characteristics of protective ammunition can repel attacks of anti-tank weapons moving at speeds from 70 to 700 meters per second. Having such characteristics, the Arena-E active defense system is able to effectively counteract the vast majority of existing anti-tank missile systems, grenade launchers, etc. weapons.

Unfortunately, by now KAZ "Arena" has not received much distribution. Active procurement and use of this system is hindered by both the relatively high cost (which, however, may be much less damage from anti-tank weapons) and some features of its work. For the destruction of enemy projectiles, grenades or missiles, the complex uses special protective ammunition, creating a directional stream of fragments. Because of this, the accompanying infantry tank should not approach it less than 25-30 meters.

The Indian side has not yet responded to the Russian proposal. Apparently, at present, the Indian military is busy analyzing the documentation provided on the proposed modernization project and are not yet ready to make their decision. With regard to the proposal for a set of additional means of protection for the T-72 tanks, the latest information on this subject appeared in the media only at the end of January.

Ctrl Enter
Noticed oshЫbku Highlight text and press. Ctrl + Enter
We are
Chalta hi aviation is powerlessUralvagonzavod today is not just a large machine-building plant, but a research and production corporation
Military Reviewin Yandex News
Military Reviewin Google News
15 comments
Information
Dear reader, to leave comments on the publication, you must sign in.