February 12 2014
181
The Vietnamese Defense Ministry rejected a contract with Rosoboronexpot to organize production in the country for the production of Kalashnikov assault rifles belonging to the 100th series. The decision to organize the production of a small weapons on the territory of the country was adopted following a tender, in which, apart from Russia, Israel and China also participated. According to the Russian edition of Kommersant, the conditions of this tender were standard. The subject of the competition was the creation in Vietnam of an enterprise that could produce up to 50 thousands of automatic machines annually. At the same time, representatives of Rosoboronexport considered that their proposal was optimal for Vietnam.


Such confidence was based on the fact that the Vietnamese army has long been exploiting precisely the Kalashnikov assault rifles. The Vietnamese army has been using AK-47 since the middle of the last century. In the event that the production of Kalashnikov’s “hundredth series” could have been established in Vietnam, the Vietnamese army would not have had to massively relearn for a new type of weapon. However, the Vietnamese military did not agree with this, they were embarrassed by the too high price of the Russian proposal. It is reported that the winner of the tender was Israel, which, according to Russian journalists, offered the smallest transaction amount. According to sources of Kommersant at Rosoboronexport, the Vietnamese military were not initially interested in the proposal of the PRC, allowing Beijing to participate in the tender for purely political reasons.

According to Kommersant, which refers to its sources, the Russian proposal was estimated at more than 250 million dollars. While Israel came out with a bid for 170 million dollars. What financial terms of the deal China has offered is not reported. Thus, in the very near future, not Russian AKs will assemble in Vietnam, but the Israeli automatic machines of the Galil ACE series, which, ironically, are a further development of the Kalashnikov assault rifle. 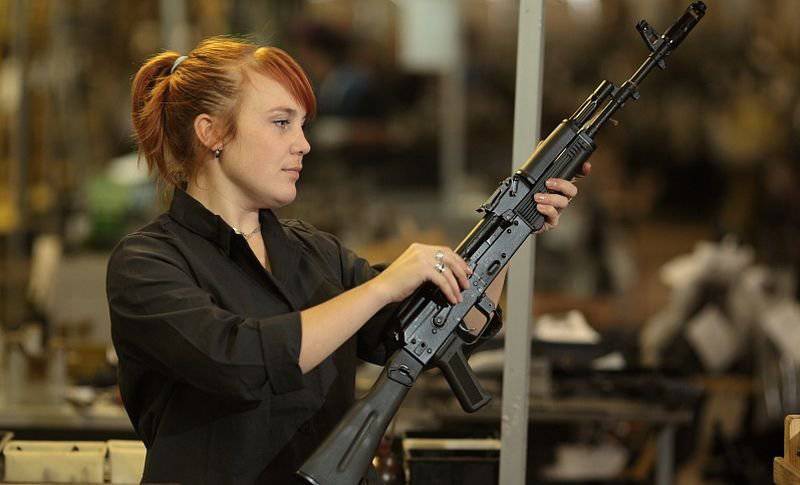 The fact that the Vietnamese military decided to focus on the localization of the Israeli automatic machines ACE 31 and ACE 32 under the patron 7,62х39 mm was reported at the end of January by the Vietnamese television channel QPVN, which showed the visit of the Vietnamese Defense Minister Lieutenant General Nguyen Thanh Chung to the plant for the production of weapons ZXNNXX located in the city of Thanh Hoa. It is reported that the construction of the factory for the production of Israeli machine guns is engaged in a well-known company Israel Weapon Industries. The cost of the construction of the enterprise is estimated at 111 million dollars. In the future, Israeli automata will have to completely replace the obsolete AK-100 used since 47 in the Vietnamese army.

Information about the loss of the competition concern "Kalashnikov" actually confirmed the new CEO of the company Alexei Krivoruchko. He explained the high cost of the Russian proposal to Vietnam by the high costs of production. At the same time Krivoruchko added that the concern expects to carry out optimization, which will not affect the number of workers in the shops of the enterprise. At the same time, sources close to Rosoboronexport call once again not to dramatize the situation, stressing that this is unpleasant, but it is impossible to talk about any losses.

For many years, Vietnam has been one of the main importers of Russian military equipment and weapons. Over the past years, this Asian country consistently ranked among the five largest clients of Rosoboronexport. At the same time, the loss of 250 million dollars does not look so terrible: every year Vietnam buys Russian military products worth at least 1,5 billion dollars. On the other hand, the rejection of Kalashnikov is a precedent in modern military-technical cooperation between the two countries. The Vietnamese Ministry of Defense publicly rejected Russian-made small arms in favor of foreign counterparts. Konstantin Makienko, an expert at the Center for the Analysis of Strategies and Technologies, believes that price escalation is currently a fundamental problem for all Russian military-technical cooperation (MTC). The sharp increase in the cost of Russian military products is the main constraint on the development of military-technical cooperation, so ways out of the current situation must be sought in the financial sector. 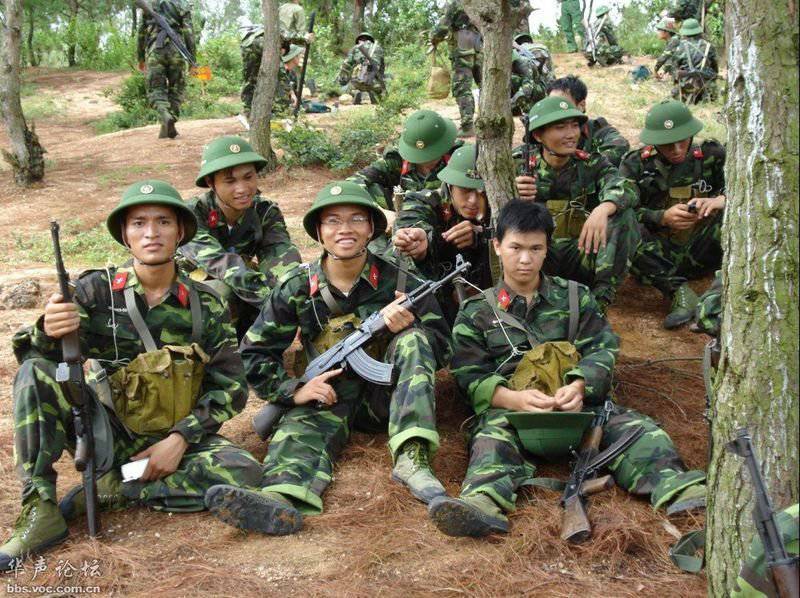 Selected by the Vietnamese military Galil ACE Israeli assault rifles - ACE-31 and ACE-32 - are identical to each other and differ only in the length of the barrel. Currently, the ACE machine is being exported. The Tavor rifle, which is manufactured by the same company, is in service with the Israel Defense Forces. At the same time, the ACE series of automata is based on Galil automata, whose design is based on Kalashnikov automata. In the line of Galil ACE automatics, the models with the number 3 in the name (ACE-31 and ACE-32) are distinguished by the fact that they are intended to use the Soviet cartridge 7,62 × 39 mm, also they use stores from AK-47. According to military experts, the fact that Israeli machine guns are built on the basis of the Soviet machine gun, which is well-known to Vietnamese, will facilitate its adoption.

According to military expert Maxim Popenker, the chief editor of a large site on small arms world.guns.ru, although in technology terms Galil ACE is close to AK, it is still more modern and convenient small arms. The Israeli machine has the best ergonomics, it is two-way, it has the ability to install various attachments (sights, laser pointers, lights, etc.). Also, the Israeli machine is equipped with an adjustable butt, which should appeal to many undersized Vietnamese.

According to Maxim Popenker, a possible reason why the price of the Russian offer turned out to be higher is that AK was originally designed for high-volume mass production. The “100th series” is still based on Soviet technology - the AK-47, which was planned to be produced in millions of series. For the production of such volumes of machines, you need a rather expensive equipment for stamping, etc. It could only pay off if you planned to arm the armies of the USSR and its allies, the expert notes.

If we are talking about arming a relatively small army, then it is much more efficient to use conventional CNC machines for which you can purchase a special program in order to cut out the necessary parts from metal pieces. Such production is more difficult from a technological point of view, but it gives, in addition to a gain in product quality (stamped parts are less durable and durable than those made by the milling method), also savings on the equipment itself. 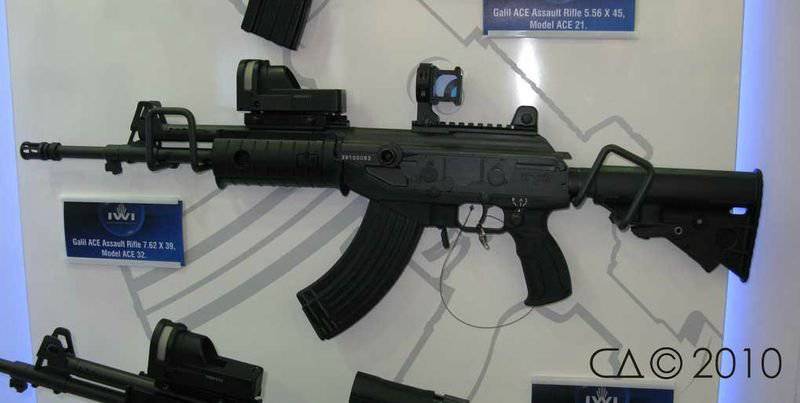 It is worth noting that the company Israel Weapon Industries seriously aimed at the international market. The Israelis have already built one Galil and Galil ACE assault rifle factory in Colombia, near Bogota. According to France Press, the volume of mass production at this enterprise amounts to 45 thousand automatic machines per year. Currently, Israeli assault rifles are in service with the Colombian army, as well as being delivered to other countries in the region. The IWI official website talks about the supply of small arms to Peru and Uruguay.

Maxim Popenker does not exclude the possibility that Vietnam will be able to re-equip not only its own army, but also be engaged in the supply of automatic machines for export, while paying Israelis royalties. From a business point of view, such a transaction may well be framed, it makes sense. At present, a rather large but at the same time complex market has emerged in Asia, where it would be much easier for the local countries to come to an agreement with each other.

It is worth noting that in other sales markets, the Kalashnikov concern does not go as badly as in Vietnam. According to Alexei Krivoruchko, in 2014, the concern is about to start organizing an assembly production of small arms in India. The planned capacity will be 50 thousand units of products annually. In addition, the Izhevsk enterprise will continue to fulfill its obligations to build a 100th Kalashnikov assault rifle assembly plant in Venezuela.

Ctrl Enter
Noticed oshЫbku Highlight text and press. Ctrl + Enter
We are
Concern "Kalashnikov" modernizes production and expands the range of productsConcern "Kalashnikov" will be presented in Izhevsk
Military Reviewin Yandex News
Military Reviewin Google News
181 comment
Information
Dear reader, to leave comments on the publication, you must sign in.