Problems of introduction of domestic components in the automotive industry


The quality of the equipment produced in a particular country directly depends on the quality of the components and the availability of technology for national manufacturers. This thesis is relevant for almost all industries in all countries of the world. For example, you can look at the path of domestic automakers. The low quality of the components, traditional for the USSR, multiplied by the economic problems observed after the collapse of the Union, made non-competitive all automotive manufacturers using domestic units in their products. The only way to survive in such conditions was the borrowing of ready-made technologies. Such a path usually leads to loss of independence of the automotive industry, loss of technological priority and competence, loss of the market, and, as a result, a reduction in the number of highly skilled jobs, reduction of tax revenues, degradation of industry, economic losses of a particular enterprise and the country as a whole. An example is the GAZ plant. The plant switched to equipping its vehicles with Chrysler and Cummins engines, then attempts were made to localize the production of Maxus and Chrysler Sebring vehicles, which turned out to be unsuccessful. In the end, the passenger program was curtailed, the production of medium-sized trucks fell to almost single-piece, and the GAZel-Business automobiles use a lot of foreign-made components, including high-tech ones — clutch, bearings, suspension components and steering. In the car of the new generation "Gazelle-Next", the share of foreign components is even higher. In the shops where the Volga car was previously produced, the production of VW and Skoda cars is now deployed. In parallel with the "Gazelle" plant launched the production of light trucks Mercedes Sprinter old generation. In the end, the competence to develop their own cars is almost lost. Unfortunately, a similar situation is observed in other domestic enterprises - KAMAZ and VAZ, which are systematically turning into production sites of world auto companies, without the ability to develop and implement their own technologies.

The existing state of affairs in this area is nothing more than a legacy of the Soviet era, fueled by the influence of foreign capital that imposes outdated technology and left the western market.

During Soviet times, there was a proven system for developing and introducing new automotive components and assemblies into production. At the first stage of the work, fundamental and applied research was carried out, mainly by scientific institutions that had the appropriate competence. The research results were transferred to the plants for subsequent implementation. At the second stage, already by the enterprises, development and testing of prototypes was carried out, including in cooperation with institutes. After the development work was carried out, a decision was made to implement this or that development. Managed all this process, including the distribution of financial flows, the Ministry of the automotive industry of the USSR.

Unfortunately, this system functioned well only in conditions of preparation for a third world war and did not fully meet the requirements of the national economy. In this connection, there has been a bias towards technical and technological retrograde. The design of cars produced by one or another automobile plant has remained almost unchanged since their launch into production for decades. There was no need to talk about advanced innovations - at best, it was possible to achieve acceptable reliability of the vehicle and its components.

Due to market processes and fierce competition in the automotive industry, foreign manufacturers could not act based on the decisions of the party and the government, and were forced to rely solely on their own capital. Without state support for success, the manufacturer who offered the best product at the lowest price achieved. The processes of globalization and the struggle for the environment have further aggravated competition.

It should be noted that even a major automaker cannot conduct research and development work in many areas at once, since it requires huge resources. Therefore, so widespread are small enterprises, including venture financing, engaged in the development of a particular technology. The activity of such enterprises is associated with a high degree of risk, but allows you to create truly advanced, outstanding innovations. Some domestic enterprises using a similar model have successfully developed and commercialized. Their technologies can be directly used in the automotive industry, for example, the manufacturer of domestic light-emitting diodes CJSC Optogan or LLC Liotech, a manufacturer of electrochemical energy storage devices, can be mentioned. But...

Unfortunately, advanced developments in the automotive industry are practically not being implemented. Apparently by inertia, we are trying to use the Soviet approach in the fight against a very strong foreign competitor. For example, in the early nineties, the question of developing a new platform — an automobile tractor (SKSHT) — became acute. The main enterprise was BAZ, and one of the key components for this platform was a new hydromechanical transmission (GMP). In 1995, VNIItransmash created the design of such a transmission. It was supposed to produce samples of this gearbox at the Transmission enterprise, which, not having had time to make a single sample, ceased to exist. All the accumulated potential and the team were lost. In the middle of the two thousand years, the question of the resumption of work on the automatic box for military motor vehicles (BAT) again became acute. However, all attempts to reanimate the GMP success were unsuccessful. A possible reason for the cessation of work in this direction at that time was the reorientation of the Ministry of Defense to the purchase of foreign samples of automotive technology, excluding the development of domestic counterparts. The author is referring to the purchase of Lynx vehicles (Iveco LMV) and 12-10FMX40 tankers on the basis of Volvo vehicles assembled in Russia from Volvo car kits, as well as testing test Centauro and Freccia armored vehicles of the German-Dutch Boxer GTK for further purchase. As a result, SKSHT BAZ is equipped only with a manual transmission, which places increased demands on the driver’s qualifications, has a bad effect on traffic, reduces engine life. The topic of introducing automated transmissions on military vehicles has not lost its relevance. According to the requirements of the Ministry of Defense, promising cars of different types (MRAP, BTR, unarmored trucks) should be completed with engines with power over 500 hp in the foreseeable future. The management of a manual gearbox with an engine of similar power requires a very highly skilled driver. 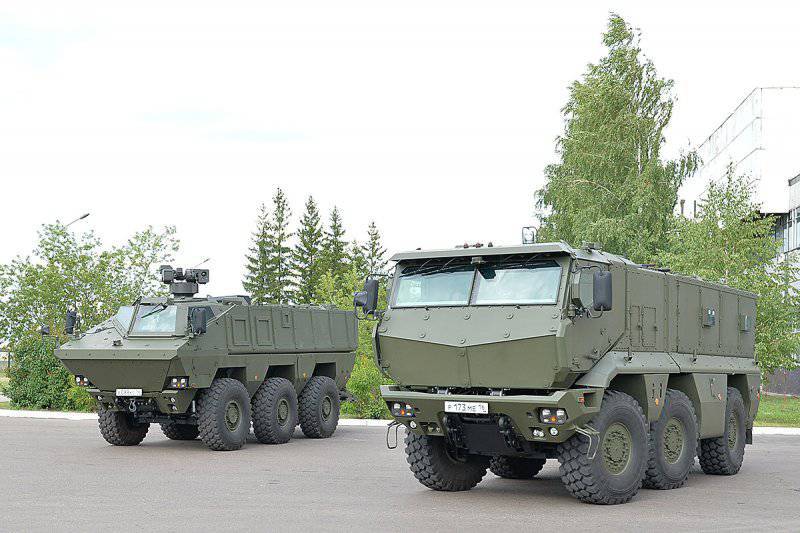 In confirmation of these words, we can give an example of promising cars of the Typhoon family, which are forced to be equipped with gearboxes of the American company Allison Transmission Inc., a world leader in the production of automatic gearboxes for commercial and military equipment. If KAMAZ and Ural plants can bring these cars to production, then we can well expect opposition from US government agencies in the supply of these transmissions for military equipment. Also it should be taken into account that the transmission control system is microprocessor-based, which means there is no guarantee that it does not have unprogrammed, hidden functions.

Understanding this and drawing on the experience of other countries where technological innovation is a good business with huge profits, in Russia, starting with 2006, funds and companies engaged in venture and project financing with state participation were created. Among them are the Russian Venture Company (RVK) and Skolkovo. One of the participants of this event - Venture Fund "VTB Capital" in 2008, was financed by the company "SuperVariator", which is developing a technology that is completely atypical for the Russian venture capital business - a continuously variable automobile transmission. The use of non-standard financial instruments to increase the technological potential of the Russian industry this time proved surprisingly fruitful. The above examples are very controversial - an experienced team who had worked in a particular direction for many years, with state support, the presence of an experimental plant and a customer represented by the Ministry of Defense of the Russian Federation failed to correctly navigate the situation and ceased to exist, and the modest team of a small enterprise managed to do which had never been possible before in Russia. The company has developed an original multi-threaded electromechanical continuously variable transmission - a supervariator. Bench tests of prototypes confirmed the tangible superiority of the supervariator over existing and future transmissions of other types. The average efficiency of the prototype was 94%, and the maximum efficiency in the most popular modes exceeded 99%. The development is completely domestic, as evidenced by the three dozen patents received by the company. Due to the possibility of virtually unlimited scaling, the supervariator can be used on any kind of military and commercial vehicles. According to available information, the enterprise team is developing a promising family of continuously variable transmissions with a capacity of 300-500 hp. which can be applied on the overwhelming number of modern BTA samples. Prospective development can replace American Allison boxes in the composition of the Typhoon cars or mechanical transmissions SKSHT BAZ.

However, the introduction of the above-described innovative technologies in the automotive industry does not occur.

The problem of personnel and technology leakage abroad is not new for Russia. In such a complex and costly field as the automotive industry, the technological passivity of enterprises that are not ready or unwilling to introduce innovations, the loss of technology is particularly painful. Unlike modern startups in the field of information technologies, which form the basis of the venture business in Russia, startups in the field of engineering are much more expensive. The high costs and risks of the possibility of creating a very large and long-running business with the life cycle of the product 20-25 years. Under the dire need of creating 25 millions of highly skilled jobs by 2020, this opportunity cannot be neglected.

Ctrl Enter
Noticed oshЫbku Highlight text and press. Ctrl + Enter
We are
Multi-axle rocket carriersProspects for the development of military vehicles for the period to 2020 g
Military Reviewin Yandex News
Military Reviewin Google News
43 comments
Information
Dear reader, to leave comments on the publication, you must sign in.