Did Russia have colonies? Part I. Baltic States as part of the Republic of Ingushetia 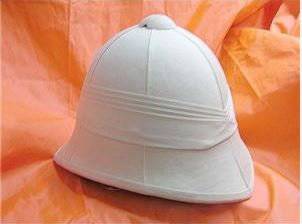 Recently, less than a week ago, when discussing a single article, a discussion arose between me and one comrade: did Russia have colonies? My opponent fiercely defended the thesis that the Russian Empire, and then the USSR, are colonial powers and they bear the blame of colonialism (we must pay tribute to him, he did not blame the common people, emphasizing the responsibility of the authorities). I, as it is clear, contradicted him and argued that my country did not have colonies. As a result, as usual, the dispute ended in nothing - we both remained at our place. However, the question of whether Russia was a typical colonial empire, or wasn’t, seemed to me not idle, and I decided to dig a little deeper: after all, we all have sufficiently superficial knowledge on this topic. Well, of course, I was wondering - my opponent had to base his conclusions on something.


Searches were crowned with success. Only the volume of the materials found was large enough, and therefore I decided to divide it into several articles. And what you are reading now is the first one.

Actually, let's start with the fact that the choice of lands of our state (both current and former) for the role of supposedly colonial appendages is not particularly great here. To those usually try to include:
1) Baltics;
2) Central Asia;
3) Caucasus (Georgia, Armenia, Azerbaijan, etc.).

Sometimes they try to add Poland to this list. However, as it turned out, some residents of the Republic of Kazakhstan have claims against us for our “colonial policy”. Although I still did not understand how a country that voluntarily became part of the Empire can be considered a colony (the same goes for Georgia). But let's get down to business.

I decided to start with the Baltic states - after all, most of the claims against us now come from there (including the preparation of millions, if not billion, claims for "occupation").

Until 1917, the territory of modern Latvia and Estonia was called the Baltic, Baltic or Ostsee provinces. Lithuania, in fact, has a rather indirect relationship to the Baltic States, because, according to the imperial division, it was included in the North-Western Territory (West
nye provinces).

The composition of the Russian Empire, Latvia and Estonia, were mostly incorporated into 1721, following the results of the war with Sweden and the imprisoned Nystadt peace. On the territory of modern Northern Estonia, the Revel province was established (from 1783 it was renamed Estland), the territory of modern South Estonia, together with modern Northern Latvia, was included in the Livonia province. In 1796, the Baltic states included the new province of Kurland, formed after the partition of Poland 1795. Later, the provinces were entrusted to governors acting on behalf of the emperor and having vice-governors (Riga, Revel, Mitawa). With the exception of a short period, from May 1801 of the year to 1876 of the year, the provinces were, moreover, united under the control of the Governor-General, whose residence was in Riga.

So what were the indicated lands within the Empire? Colonies? Or new provinces, areas that were supposed to develop as part of a single and indivisible state? For this you need to consider history cultural and industrial development of new provinces.

CULTURAL DEVELOPMENT OF THE BALTIC AS A COMPOSITION OF THE RI

In Livonia, in 1890, there were 1959 schools that trained 137285 people. The children who were trained at home under the supervision of the clergy were 48443; the total, therefore, enrollment was 185 728. In the same year, from recruits recruited to the service were illiterate 83, and literate and semi-literate 2458 people.

In Kurland, 1910 was “8 secondary schools (over 3 thousands of students), 13 special secondary (over 460 students), 790 lower (36,9 thousands students)”, from which contemporaries quite naturally concluded that “education in the province was better than the average ".

In addition to education, medicine was also at a high level in the Ostsee region. Thus, the following number of hospitals accounted for each province:
- to Courland - 33 hospitals for 1300 seats (1910);
- to Estland - 18 hospitals at 906 places + 40 pharmacies (1902);
- to Livonia - 8 hospitals (in each county, from 20 to 60 places) + 2 hospitals in Riga at 882 places + prison hospital (1890 g.).
In addition, there was a psychiatric clinic at the university’s medical faculty in Dorpat, and a hospital for the mentally ill on 362 beds was near Riga And 8 almshouses in Riga + several in each county town.

Is it any wonder that the population of the region grew at a fast pace? Below is a summary table of population growth in the three provinces under review.

As we can see, in terms of the cultural development of the provinces that made up the Ostsee region (the Baltic states) were far from being colonies, and comparing their status with the position of India (the British colony) is at least ridiculous, if not to say silly. In any case, I don’t remember something about having a Hindi grammar textbook published in India and Indian philosophers to form scientific societies. Moreover, if we consider in detail educational institutions of provinces, it turns out that there were also schools for deaf-and-dumb (!) - as many as 3 things, in Livonia. That would have been a prim British gentlemen to invest in such a dubious - in terms of profit - the case? A rhetorical question.

But maybe all of the above is a folding screen? And the Empire developed these territories - just to make it easier to rob them? Perhaps the very formulation of this question will seem to you nonsense - but this nonsense has an explanation: I received this answer in the very dialogue when I asked “Why did they develop culture and economy in these“ colonies ”?” - “To make it easier for them to exploit. " So let's check what was in the Baltics - infrastructure for pumping out resources or something else?

INDUSTRIAL DEVELOPMENT OF THE BALTIC IN THE COMPOSITION OF THE RI

For a start, a short chronology of events that had important implications for this region:
- 1802.: A reform was effected in Estland softening serfdom: the peasants obtained the rights to movable property, courts were created to resolve peasant issues;
- 1816 T .: serfdom was abolished in Estland;
- 1817 g .: Serfdom abolished in Courland;
- 1819 T .: serfdom abolished in Livonia;
- 1849, the Agrarian Law was adopted in Estonia: the peasants received the right to lease and buy land from landowners:
- 1863 T .: the peasants of Estland received identity documents and the right to freedom of movement;
- 1865 and 1866: “the right to own land for all” was adopted by law, first in Courland, then in Livonia;
- OK. 1900 G .: almost all the land cultivated by the peasants became their property.

Initially, the Baltic provinces specialized in agriculture. So, being in the composition of the Swedish kingdom, Livonia and Estland were called “the breadbasket of Sweden”. However, with their inclusion in the structure of the Empire, the situation began to change gradually - the manufacturing industry received active development, and by the beginning of the 20th century Kurland, Livonia and Estland belonged to the most industrially developed regions of Russia. For example, in 1912, there were about 200 factories and plants (flour mills, vodka, sawmills, tanneries, brick factories, etc.) and about 500 handicraft enterprises in the territory of Kurland. In Estland, the province of factories and plants in 1902 was 564, with 16926 workers and production at 40655471 rubles.

According to the estimates of P.V. Gulyan, approximately 1913% of all Russian products were produced on the territory of Latvia in 5, while the proportion of local residents in the country's population was about 1,6%. By the beginning of World War I, the share of industrial production in the entire economy of the region was 52%. The leading place in its structure was occupied by heavy industry, primarily engineering and metalworking. Riga was considered the center not only of car and car manufacturing, but also of production aviation equipment (since 1911, the construction of aircraft began at the famous Russo-Balt plant, and later at the Motor plant, which produced the first aircraft engines in Russia). Significant development has been achieved in the chemical (mainly rubber), woodworking and paper industries. There were also large textile enterprises and a developed food industry.

Estonia was less developed industrially (the economic crisis 1901 — 1903 was considered one of the main reasons for this situation). According to a number of estimates, on the eve of the PRC, Estonia accounted for about 2,8% of all industrial products in Russia - with all 1,5% of industrial workers.

In Latvia, from 1900 to 1912. industrial output increased by 62%. Such industries as chemical, food, light and metalworking were especially distinguished by high growth rates. The table below shows the general structure of the Baltic industry in 1912-1913. 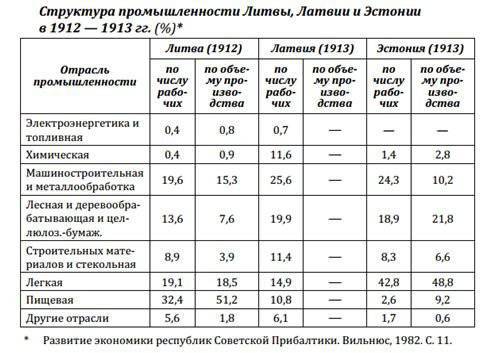 Another indicator of the importance of the Baltic provinces for Russia and their integration into the Empire (and, accordingly, vice versa) is the indicator of product sales. Unfortunately, the data were found only in Latvia - although, in general, it was the most industrially advanced of all three “Baltic sisters”. The data is presented below. 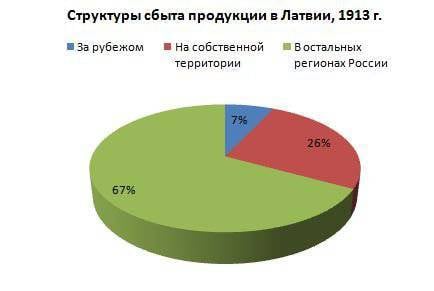 So what can you say based on the available data? And the fact that in its position and value Baltic was not a colony of the Empire. It was one of the most powerful industrial centers of Russia, without which the normal functioning of the state was hardly possible. But the opposite is also true: without Russia, without the economic ties that existed between the Empire and the three gubernias for centuries, the normal development and existence of the Baltic states would be a painful and problematic process. Actually, the events that followed the secession of the Empire and the independence of the provinces, confirmed this fact. But about this next time when we consider a short period of independence of the Baltic States and its development as part of the Red Empire - the USSR ...