Did Russia have colonies? Belated preface 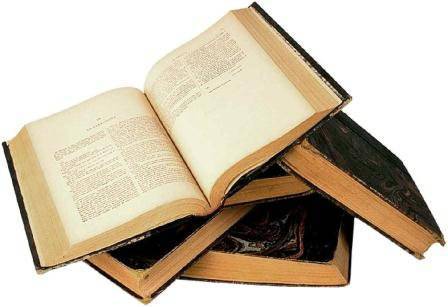 In a recent discussion of my last article (see here) It turned out that I inadvertently missed a rather important point, namely, the concepts of “colony” and “empire” were not considered in detail, which, in my opinion, a number of readers had not quite the correct perception of these terms. Therefore, I decided to devote a separate note to this issue - a kind of preface to subsequent chapters. Yes, it was necessary to start with this, but, alas, we are all strong in hindsight. Let's get down to business.

EXCLUSIVE DICTIONARIES, “VIK” AND “CLEAR THAT NOTHING IS NOT CLEAR”

We begin with the term "empire". Many do not consider the existence of this concept in isolation from the concept of "colony". That is, if there is an empire, then it must also have colonies a priori. A sort of axiom. However, it is not. If you look at the "Explanatory Dictionary of the Russian language" in 4-x volumes, then we read the following:

“IMPIRE, and, well. [latin imperium supreme power]. The monarchical state, the head of which carries the title of emperor. "

As you can see, quite briefly. Therefore, we will use the “Explanatory Dictionary of the Russian Language” by S.I.Ozhegov and N.Yu. Shvedova. Here we have:

“The monarchical state headed by the emperor; in general, a state consisting of territories deprived of economic and political independence and managed from a single center. ”

This definition is in more detail, but it nevertheless allows for the possibility of its incorrect use: on the basis of it, as an empire, many states can be designated - and at least China and Vietnam: management is centralized, and the territories have no political independence.

In the all-knowing "Vic" there is the following interpretation of this concept:

“An empire (from Latin imperium - power) is a powerful military power uniting different nations and territories into one state”.

As we can see, there is no direct indication that an empire should possess colonies. However, there are indirect indications. The Wikipedia article on the term empire contains the following text:

"Currently widely used also figurative interpretation of the word "empire". In this case, it means a large state and population with the following features [source not specified 1727 days]. ”


I specifically highlighted in bold: figurative interpretation, not direct. The following are a number of signs. They are presented in the screenshot below.

Let me remind you: Wikipedia is positioning itself as a free information resource. indicating the sources of the proposed information. As we see, the sources from which it follows that the presence of colonies for the empire is mandatory, not listed.

Moreover, the signs that are indicated at the very end of the wiki article and designated as common to any empire on the planet, contradict the information in the same article, namely that empires can be of two kindswhich differ in the presence and absence of colonies.

Let's see what these two types of empires are. Delve into geopolitics. In 1904, the work of the eminent English geographer H.D. Mackinder - Geographic Axis stories"(Geographical pivot of history), which introduces the concept of" Heartland "(Heartland -" core of the earth "), from which, in fact, derives the theory of the same name.

According to Mackinder’s theory, “geography studies the present in the light of the past, and world history is a continuous struggle between two principles, two civilizations - oceanic and continental”, i.e. the confrontation of two types of empires - “land powers” ​​(or continental empires) and “sea powers” ​​(or colonial empires). The fundamental advantage of the “land powers”, according to Mackinder, is the presence of the Heartland - the pivotal space (Earth's Core or Eurasia), which has huge reserves of natural resources and is inaccessible to sea powers. The advantage of maritime powers (or countries of the “inner crescent”) is the presence of a powerful naval and commercial fleet, which can be used to gradually strangle the countries of the Heartland (the so-called "Anaconda Loop", which was developed already in the theory of N. Spykman). 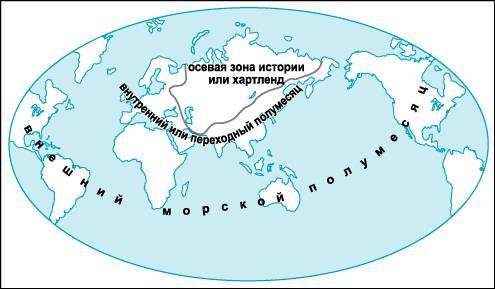 Sushi Powers, Continent Powers, Tellurocratic Powers (lat tellūris, genus n. from tellūs "land, land, country" + dr.-grech. κράτος "power"; "Land power") - these are empires, whose expansion is connected exclusively with land, and which, when they adjoin neighboring lands and include them in their borders, for security reasons, are forced to immediately turn them into their provinces, to guarantee the operation of the imperial laws and the circulation of the imperial currency. That is, newly included lands are considered not as only a source of resources that can be abandoned after exhaustion, but a new addition to the empire, which is to be developed to the level of the center. As a rule, this leads to a relatively painless inclusion of elites and societies in imperial construction, although much depends on the level of culture and the development of newly incorporated territories. So, the same Baltic was able to integrate into the structure of the Empire almost painlessly, while the former khanates of Central Asia or certain lands of the Caucasus, who lived according to precepts and traditions that had not changed since the Middle Ages, showed some resistance. And if the Caucasus was able to pacify (what great merit AP Yermolov), then on the territory of Wed. Asia, transformed into the Turkestan Governor-General, almost all the time there was martial law (I will discuss this in a separate article).

"Powers of the Sea", colonial powers, tallosocratic powers (from other Greek θάλασσα "sea" and κράτος "power") - these are states whose development is directly connected with the sea, and expansion is aimed at acquiring colonies - dependent territories used as resource appendages and markets for goods of the metropolis. The management of the colony by the Tallosocratic state is carried out on the basis of a special, colonization mode. Often, under this management regime, civil rights comparable to the rights of citizens of the metropolis are not granted to the population of the controlled territory. At the same time, the citizens of the metropolis possess more power and privileges in the colonial territories than the natives. A striking example is British India of the XVIII-XIX centuries.
At the height of the Second World War (in 1943), Mackinder subjected the concept of the Heartland to a significant revision, abandoning “the rigid dichotomous opposition of land and sea powers” ​​(quoted by V. Dergachev) due to the union of the USSR, Great Britain and the USA. However, as we all know, the "allies" turned out to be those allies (may the editors forgive me for the tautology), which the cold war confirmed. So, in my opinion, Sir Mackinder hurried slightly with making changes.

We summarize all of the above.

1. An empire is a state that possesses serious military power and unites different peoples and territories, devoid of economic and political independence, into a single state, where control is exercised from a single center.

3. A colony in terms of geopolitics is a territory or a country deprived of independence, ruled by a foreign state (metropolis), managed on the basis of a special regime and used as a raw materials appendage and a sales market for metropolitan goods, and with further economic development and as a kind of reservoir for dumping inflation. on the part of the metropolis (this was perfectly demonstrated by the States in Latin America at the beginning of the 20th century).

Arguing formally, we come to the conclusion: in principle, Russia cannot have colonies, since Russia is a sharply continental power. Dependent territories (the so-called protectorates) - yes, but not colonies (and the difference between the same protectorates and colonies is huge). But since formal logic is not always the best evidence, it is better to confirm it with facts. What I am going to do in subsequent articles.

Ctrl Enter
Noticed oshЫbku Highlight text and press. Ctrl + Enter
We are
What you didn't want to know about EnglandHow can Russia survive and win in the 21st century?
Military Reviewin Yandex News
Military Reviewin Google News
356 comments
Information
Dear reader, to leave comments on the publication, you must sign in.