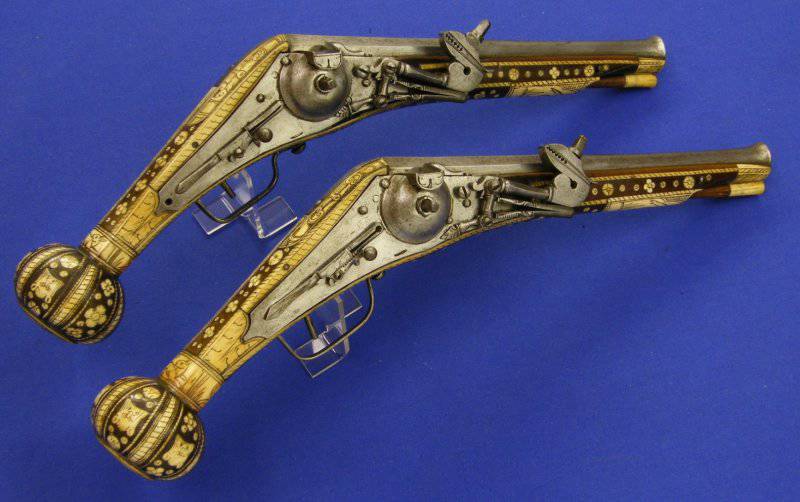 Nuremberg the generally recognized center of the appearance of a short-barreled weapons. Arms stigmas of this city are decorated with many weapons, which have reached our time and amaze with amazing beauty of decoration and original design.

Many surnames of famous gunsmiths glorified this city. One of these masters is Hans Herl. It is hard to imagine that in the conditions of fully manual labor, without machine equipment, it was possible to manufacture such complex mechanisms as locks for a wheeled pistol, and to make a weapon handle unique in its beauty. 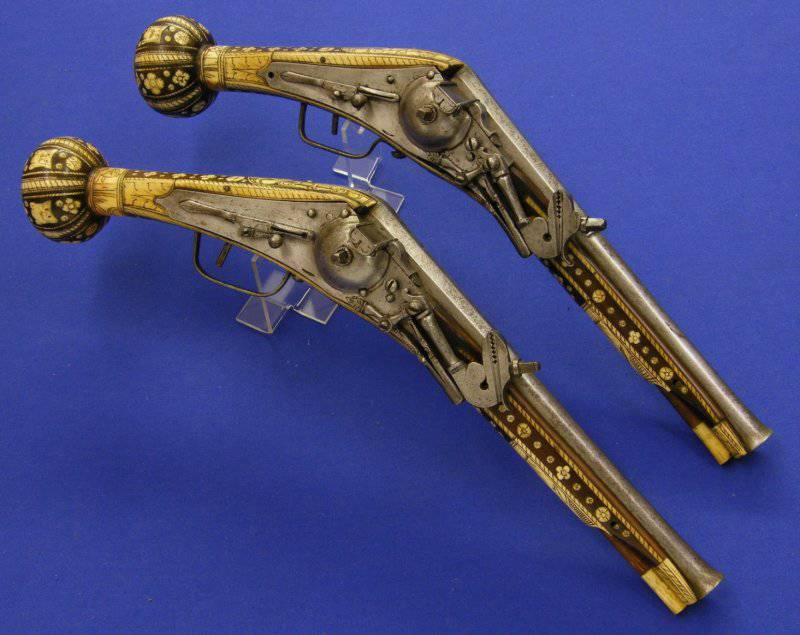 This pair of wheel guns was made by Hans Hurl around 1580. The guns in the style of manufacturing are the so-called wheel pistols puffers (Wheellock Pistols Puffers). A characteristic feature of this weapon was the presence of a ball (apple) on the shank of the handle. 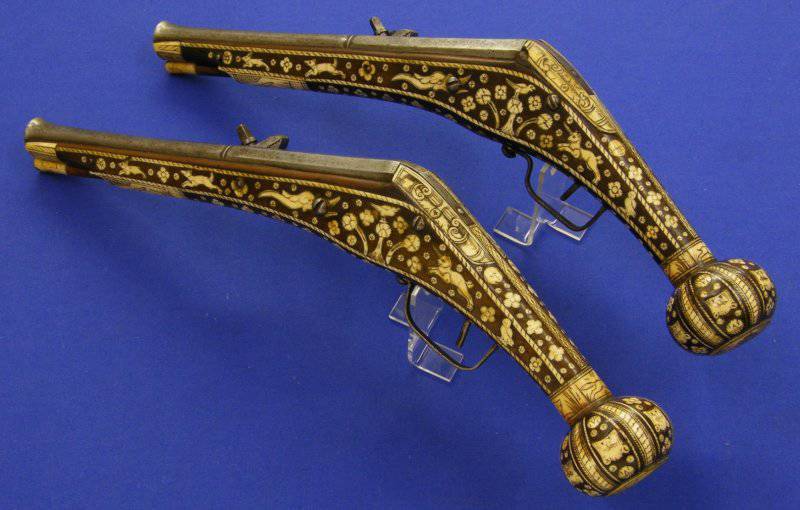 This design is typical for an early wheeled weapon. The ball (apple) is borrowed from the cold weapon of a shock-shattering action. Due to the fact that reloading pistols takes a long time, the shooter after the shot had something in his hand for defense and attack, something like a spherical mace. This style of production was especially characteristic of the masters from German cities. 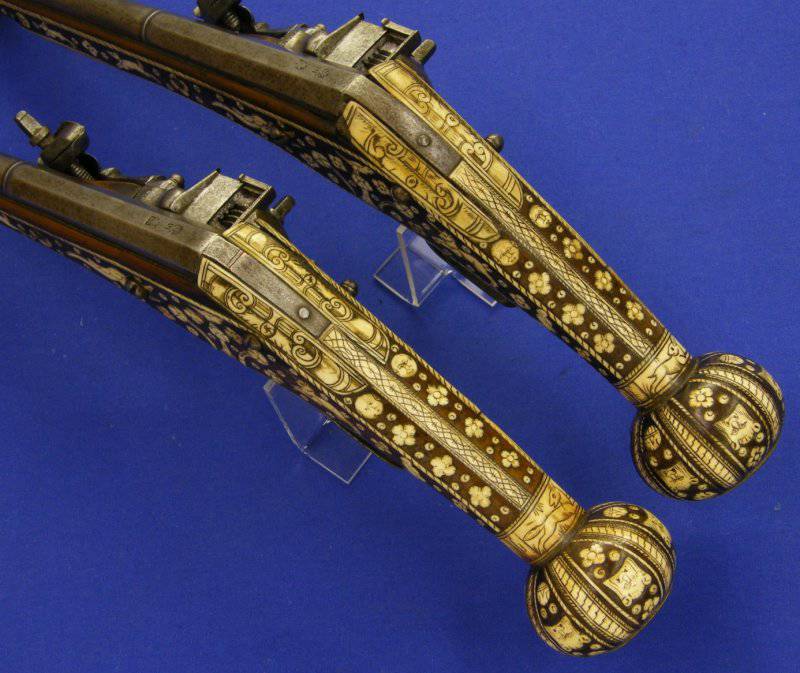 Wheel pistols were very expensive weapons because of the complexity of manufacturing wheel locks. To allow to have such a gun could only notable and rich people. To further emphasize the status of its owner, gunsmiths richly decorated the weapon with carving, engraving and bone inlay. To increase the fire power and increase the number of charges, pistols were often made in pairs. This kit also represents a pair of pistols almost completely replicating each other. 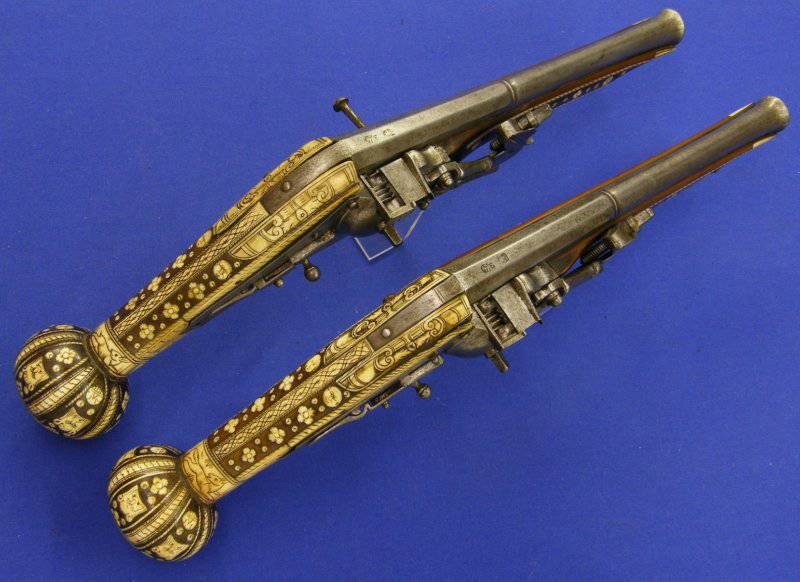 The length of 48 pistols, see. The trunks in the breech are octahedral, in the middle there is a narrow ring-shaped transition, after which the barrel has a cylindrical shape. At the muzzle, the trunks have an extension like that of the trombone. One of the purposes of such weapons was the rider’s weaponry. The presence of the expansion of the barrel at the muzzle significantly facilitated the loading of the pistol by the shooter on horseback. 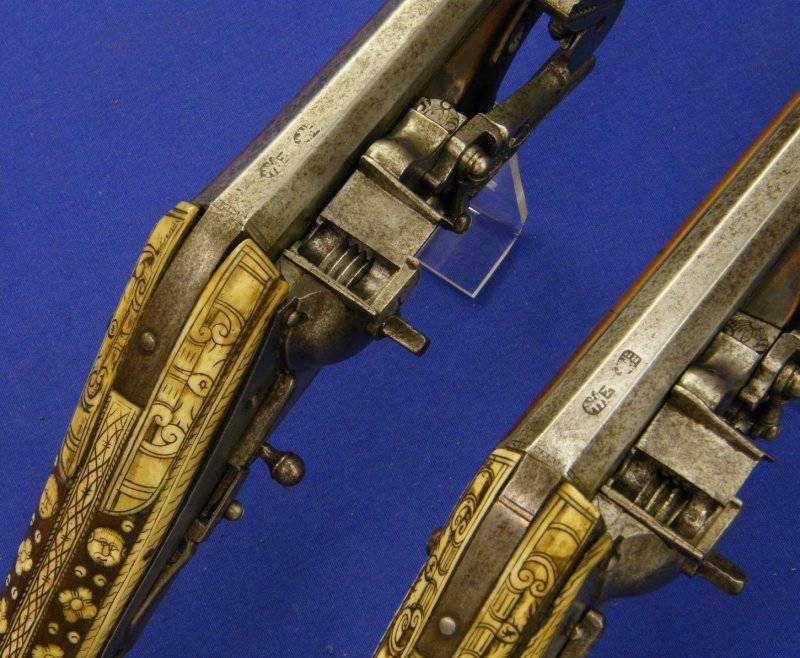 In the breech breech there are stamps of Nuremberg in the form of the letter “N” above the shield with the emblem of the city, as well as the stamp of Hans Herl in the form of the abbreviation “HH” under the image of the unicorn. Shanks of state bolts are fastened with the help of a through screw, which is included in the front fastening of the trigger guard. 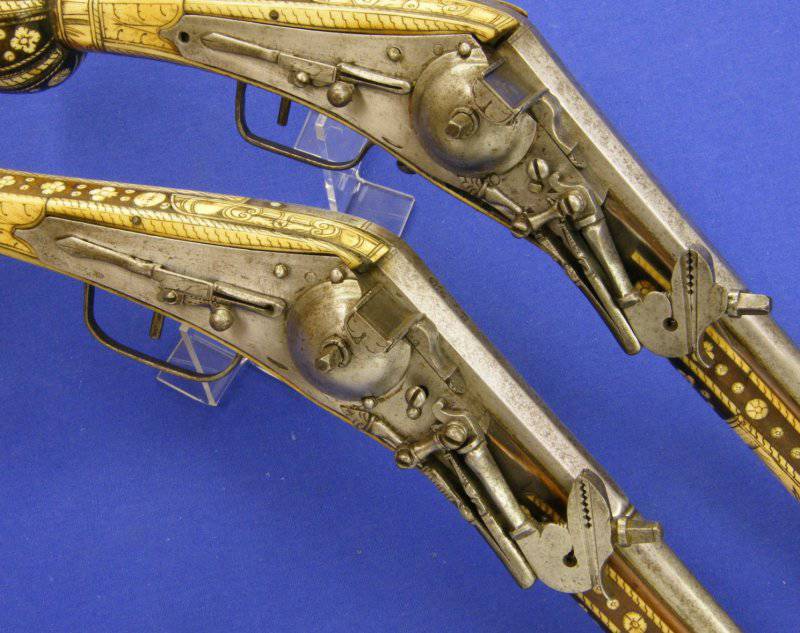 Pistols have locks have a more perfect design. The wheels are covered with hemispherical covers that protect the mechanism from pollution. Between the wheel and the trigger on the lock plate is a button for automatically closing the powder shelf. In the back of the lock is a safety mechanism with a spring, in the on position, the locking trigger mechanism. The jaws of the trigger have a special notch for reliable fixation of pyrite. 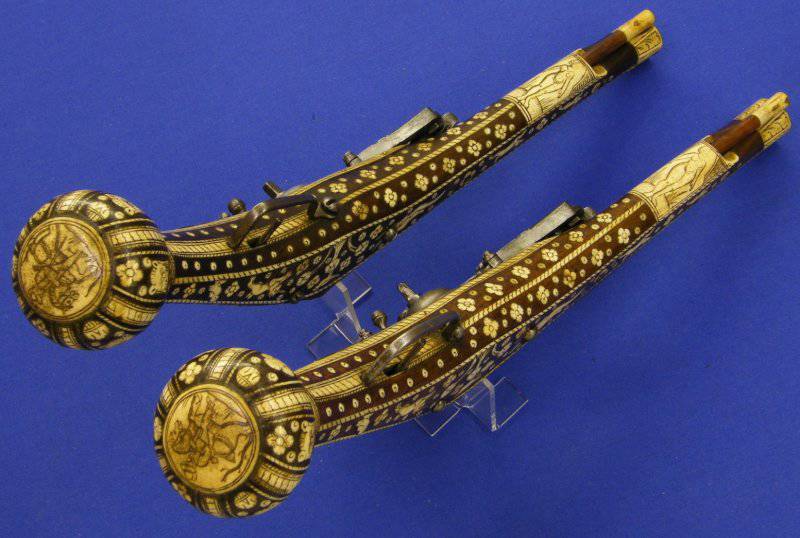 Bone inlays are a floral and geometric pattern in the form of flowers and decorative stripes, images of birds and animals, including the mythical unicorn. The heads of the balls adorn the bone plates with images of horsemen. The mouths of the shompolny entrance are also inlaid with bone, they are decorated with the image of a naked woman. Triggers are straight, installed directly into the hole in the handle, no triggers. The trigger guard is narrow, its back part is inserted into the handle, the front part is fastened with a screw. 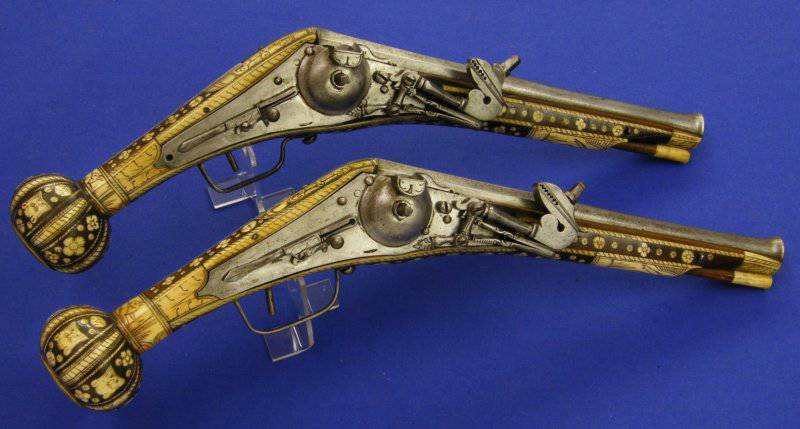 Hans Hurl's wheel pistols show the level of technical equipment of medieval free cities. The appearance of a pair of weapons suggests that already at the end of the 16 century the masters used some kind of primitive mandrel or patterns to get parts of similar locks, identical stamps and markings, which indicates a sufficiently high technological level of production.

Not one hundred years have passed since the appearance of these weapons, each year their price will only increase. I would like to hope that these and similar pistols will surprise future generations of people in love with weapons and appreciate their elegance and nobility with their design and beauty, and will not be lost in the storerooms of museums or in the warehouses forgotten by officials.