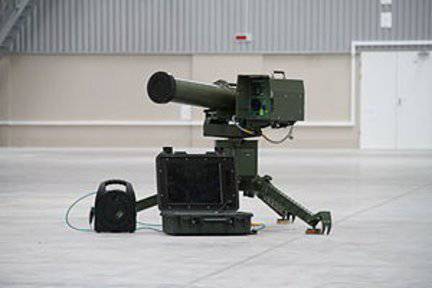 In recent years, the Belarusian military industrial complex has been increasingly aggressively (albeit with varying success so far) promoting its latest developments in the field of anti-tank weapons to the international market.


With good reason, they include the third generation Hornet anti-tank missile system (ATGW). Being a further development of the Belarusian-Ukrainian anti-tank complex "Skif", "Hornet" through the use of original technical solutions surpasses it in a number of important parameters.

Thus, the use of the 2 mm caliber, along with the PK-130 rocket, of the more powerful 2 mm B-152M caliber (both developed by the Kiev State Design Bureau “Luch” and produced by the Kiev factory Artem) allows the Hershen’s ATGM, at a distance of 5000 m guaranteed to hit all modern armored targets, regardless of the point of impact (projection). The armor penetration of a tandem cumulative warhead for dynamic protection at an 60 meeting angle is: a rocket of the 130 caliber mm — no less than 800 mm; a rocket of the 152 mm caliber — no less than 1100 mm.
The Hornet ATGM can be used not only to destroy armored vehicles, but also (due to the presence of ammunition with high-explosive and thermobaric combat units) for the destruction of buried protected objects (such as bunker, dota, bunker) and low-flying low-speed targets (helicopters, unmanned aerial vehicles devices). And the use of an elongated P-2В rocket (in the Hornet-Q version) increases the maximum firing range to 7500 m, which significantly increases the chances of successfully fighting surface targets during coastal defense.

High accuracy of destruction of all types of targets is ensured by the use of a noise-free laser guidance system, which is implemented in a PN-S guidance device developed and manufactured by Minsk Peleng OJSC.

This device has a television and thermal imaging channels with wide and narrow fields of view. The first mode is used to search for the target, and the second - to capture it. In addition to the PN-S guidance instrument, a thermal imaging camera can be installed, which allows the detection and identification of targets at a longer range in adverse weather conditions.

To date, PN-S is the only ATGM guidance device with an integrated laser rangefinder, which ensures fast and accurate targeting. In addition, PN-S can be used as an independent means of reconnaissance and target designation (measurement of distances up to 9 km is provided with an accuracy of 5 m).

The device can also be used to control anti-tank missiles induced by the laser beam and fired not only from the launch container, but also from an artillery gun or tank guns. This allows the device to be used to direct other missiles developed by the Luch design bureau, including 100-, 105-, 115-, 120- and 125-mm ammunition.

After the launch of the rocket, the operator’s task is to control the flight path and, if necessary, correct the aiming point with a joystick on the remote control.

Thus, although the Hornet’s ATGM system actually implements the principle of “fired and forgotten,” there is also the possibility of retargeting the missile to a more important or dangerous target.

The remote control panel can be moved to a distance of 100 m from the launcher using a wired communication channel and to 300 m with a wireless control. Today, the wireless remote control function is implemented only in the Hornet ATGM.

And with one remote control, you can control several launchers and / or combat modules (up to four). The possibility of the operation of the complex (several complexes) as part of a unified management system with automation of the process of exploration, target designation and target distribution is also provided for.

To date, we can talk about four versions of the Hornet ATGM.

The basic version consists of a universal combat module installed on a tripod, a transport and launch container with one missile, a PN-C guidance device and a remote control. The deployment time of the complex by combat crew of two people does not exceed two minutes.

"Hornet-L" is a lightweight version for shooting from shoulder to a distance of no more than 2,5 km.

"Hornet-D" - modification with two fire channels, can be installed on the vehicle.

The Hornet-Q is a modification with four fire channels and an automatic lift (or without it). Installed as a combat module on the vehicle.

We add that, despite the indisputable advantages of the Hornet ATGM over similar developments, information in open sources about the massive sales of this weapons not yet published.