January 31 2014
37
By 2015, the new Russian high-speed helicopter should have a technical design and a full-fledged “flying laboratory”. The Mil Moscow Helicopter Plant expects to receive under the state contract 3,3 a billion rubles for these purposes. The creator of the best-selling helicopter Mi-8 and Mi-17, which are in demand both in Russia and around the world, has already chosen the name for its new project - RACHEL. In the future, it is this helicopter that will prove to the whole world Russia's leadership in the field of helicopter construction.


Currently, the Mil Moscow Helicopter Plant is part of a large holding company, Russian Helicopters. By the end of November 2015, the company must complete work on creating a draft and technical design of a new Russian prospective high-speed helicopter (PSV), as well as complete work on creating a so-called flying laboratory - a prototype helicopter, on the basis of which all kinds of tests should be performed. It is reported by the Russian agency ITAR-TASS with reference to the representative of the holding "Helicopters of Russia" Roman Kirillov. According to the press service of Russian Helicopters, the holding expects to take part in the competition of the Ministry of Industry and Trade for the conclusion of a new contract, which implies the continuation of research projects within the framework of designing and creating a PSV.

Currently, the holding company "Helicopters of Russia" is on the rise. At the end of 2013, the holding's enterprises produced a 303 helicopter for Russian and foreign customers (against 290 machines in the 2012 year). According to the results of 2013, Russian Helicopters expect to receive revenues in the amount of 140 billion rubles (in 2012, this figure was 125,7 billion rubles). On 11 December 2013, the enterprises included in the holding had firm orders for the supply of 772 helicopters for a total amount in excess of 370 billion rubles. At 2014, the holding has already fully secured itself with contracts, in 2015, the security of 73%, in 2016 - 25%.

Rachel aka b-xnumx
It should be noted that the sonorous English name RACHEL is an abbreviation, stands for Russian Advanced Commercial Helicopter (Russian promising commercial helicopter). The objective of this project is ambitious, he will have to replace the most successful and massive car of the Russian production today - the legendary Mi-8 helicopter. On this path, the holding adopted a number of fundamental decisions. For example, according to the “Russian Helicopters”, instead of the maximum speed, priority was made in favor of the efficiency and environmental friendliness of the new helicopter. The speed of the helicopter will also be important, but the speed priority will be of the order of 25% compared to other modern counterparts, rather than 50% or 100%, which are offered by high-speed helicopter building programs. All of them are highlighted in separate projects. The selection of priorities in the development of the machine was carried out after conducting a large-scale marketing research, which was conducted with the direct participation of helicopter operator companies.

According to the plans of the holding, RACHEL should occupy the niche of multi-purpose commercial helicopters with a take-off weight of up to 12 tons. A passenger version of the car with a comfortable cabin will allow the passenger to carry the 21-24. In addition, specialized versions of the helicopter will be developed: patrol, search and rescue, medical. According to representatives of Russian Helicopters, the RACHEL helicopter will be able to gradually replace the fleet of domestic Mi-8 / 17 helicopters. Together with another brainchild of Mil, a heavy Mi-38 helicopter, the long-term car should strengthen the position of the Russian company in its traditional markets.

For the first time, the new Russian concept RACHEL was shown to the public in 2013, as part of the English Farnborough Airshow. It became the main novelty of Russian Helicopters at this air show. At the Mile Moscow Helicopter Plant, which is working on a promising high-speed helicopter, the car is also called the B-37 (some believe that in the future the name may be replaced by Mi-37). At the exhibition, the Director General of Russian Helicopters Dmitry Petrov told reporters that the stage of conducting preliminary research on the PSV program has now been completed. “We firmly believe that the main competitive advantage of any technology in modern realities is its economic efficiency. High returns from the commercial use of the machine - that is the criterion that we put at the forefront while working on the concept of our new helicopter, ”said Dmitry Petrov. Consequently, as noted above, for the Russian RACHEL project, the main thing will not be to achieve the maximum flight speed, but to ensure a machine price acceptable to the operator and to minimize direct operating costs. 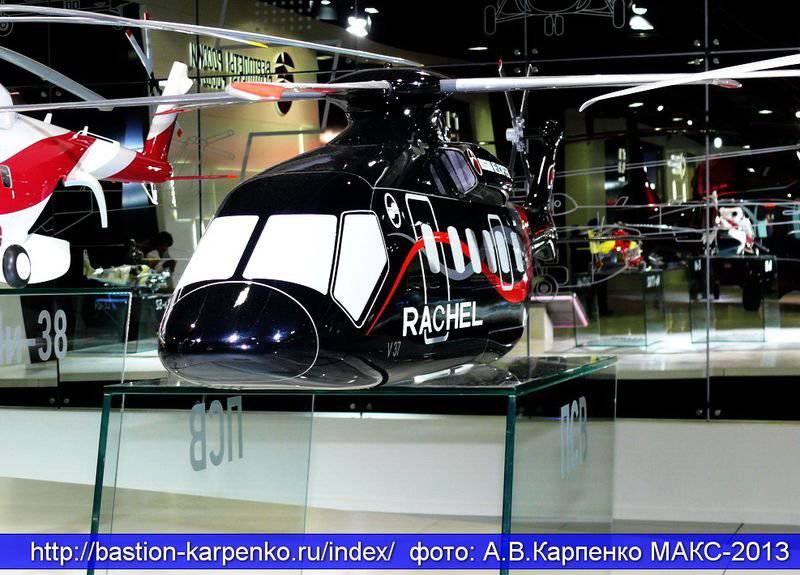 Rachel aka b-xnumx
At the initial stage of the PSV program, two Russian leading design bureaus of the holding successfully completed work on creating the appearance of a promising machine Kamov OJSC offered a helicopter with coaxially rigid Ka-92 propellers, and OJSC MVZ named after. M.L. Mile "- a project of high-speed Mi-X1. It is worth noting the fact that both presented developments received a positive assessment of the holding. It was decided that work on both projects will continue. Currently, the company "Kamov" continues its work on the development of a flying laboratory for working out technical solutions for a high-speed machine of the coaxial circuit, and the MVZ them M.L. The mile is concentrated on the B-37 - the helicopter of the classical scheme.

It is reported that the basic modification of the B-37 will be a multi-purpose helicopter equipped with a convertible cabin. The helicopter can carry up to 24 passengers and up to 3-4 tons of various cargoes. The machine will receive the latest avionics complex and the latest generation carrier systems, which, in combination with the perfect aerodynamics of the helicopter's fuselage, should ensure its flight at cruising speeds up to 350-370 km / h. Compared to the famous Mi-8 / 17 family, a significant increase in the flight range of the vehicle is also planned. The 2 prospective turboshaft engine (MPE) is planned to be used on the helicopter as a power plant, the United Engine Corporation is working on its creation. At the first stage, the use of upgraded engines belonging to the VK-2500 family is considered possible.

Under the state contract for the creation of new helicopters in the 2014-2015 years will be allocated about 4 billion rubles. In the event that Russian Helicopters win the competition, the Mil Moscow Helicopter Plant will receive about 3,3 billion rubles. These funds will be used to further develop the RACHEL project. The remaining funds (of the order of 0,7 billion rubles) will be transferred to other co-contractors on the creation of a high-speed helicopter, including the development of new engines. For example, at the Klimov plant it was reported that in the year 2014 they will continue to work on key systems and elements of a new generation engine, which is intended for installation on PSV. Engine demonstration tests and certification work are scheduled for 2015 year. The start of flight tests of PSV prototypes should begin in 2016-2017, and the completion of certification of machines and the beginning of their mass production is scheduled for 2018-2019 years. 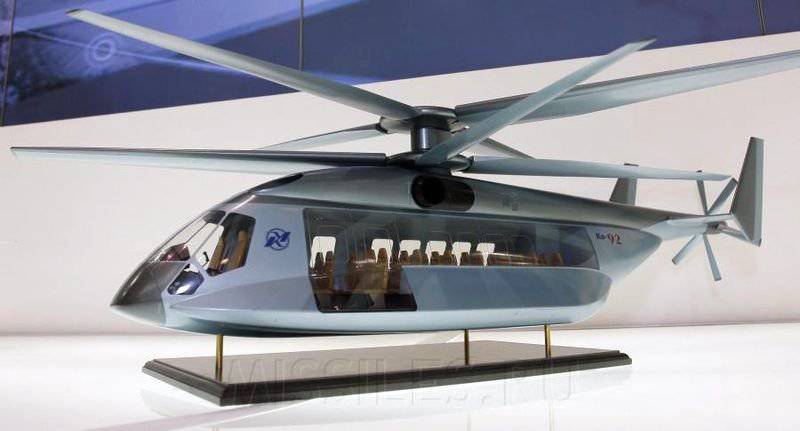 Ka-92 project
In 2013, the holding company “Helicopters of Russia” has already become the winner of the competition for conducting research projects to develop a new promising helicopter, having received from the state 2,5 billion rubles. Most of this amount was transferred to the Mil plant, the funds were used to develop a helicopter advance project. The remaining funds were transferred to the companies involved in the project. Initially, the creation of the PSV program assumed at once two developments that were conducted in parallel with each other - Ka-92 KB Kamov and Mi-X1 CB Mil. However, in the end, the most optimal approach from a technical and economic point of view was the approach and decisions of the Mil Design Bureau. Despite this, work within the framework of the creation of the Ka-92 helicopter will continue, but for a more distant future.

Igor Korotchenko, Head of the World Trade Analysis Center weapons (TSAMTO), in an interview with the Vzglyad newspaper, noted that these are two different schools of helicopter building, each with its own concepts and approach. If you look at the market indicators, the “Mil” machines abroad have stronger positions than the “Kamov” machines, which does not mean at all that one helicopter school is worse or better than the other. In this case, it is mostly about the limited resources available and the high cost of the work being done. Under these conditions, it is absolutely normal that the competition was conducted at the level of concepts, and not at the level of advance projects or finished developments. To finance parallel two competing works would be impossible, the expert believes. The choice made in favor of Mil Design Bureau gives hope that the PSV project will be successful.

“We have completely lost the passenger aircraft segment and are currently only trying to occupy a niche in short-haul traffic at the expense of the Superjet, plus we are working on the creation of the MC-21 in order to start competing with Airbus and Boeing. At the same time, Russia occupies a leading position in the world in the segment of helicopters. An exception can only be called luxury helicopters designed for the transport of VIP-persons. Along with this, in the traditional segments - combat helicopters, military transport helicopters, heavy helicopters, deck helicopters of Kamov - we have excellent positions in the market, ”notes the Director of TSAMTO. 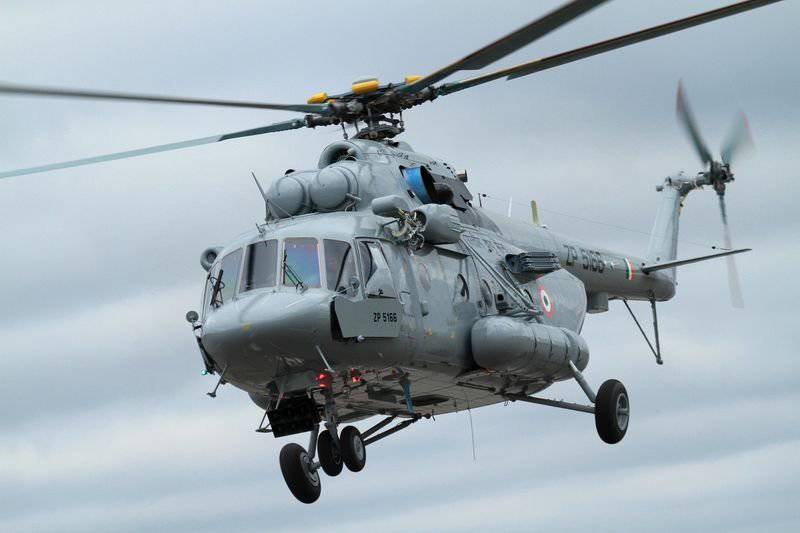 Mi-17B5 Indian Air Force
Mi-8 / 17 helicopters in the mid-range helicopter segment are by far the most in demand. They fly around the world, even NATO in Afghanistan gives preference to these Russian helicopters, acquiring them for the Afghan army at the expense of the Pentagon’s budget. At the same time, these machines are still the Soviet backlog, so today it is worth thinking about completely Russian developments, notes Igor Korotchenko.

Today, the development of a high-speed helicopter is, in a way, the mainstream of the entire global helicopter industry. Therefore, Russia should not stand aside. Even if the current Mi-17 helicopters are still for 30-40 years, they will be a real hit in the global market. Today, for a huge number of countries, these machines are the only alternative helicopter technology. This primarily concerns countries in Africa, Latin America, Southeast Asia and the Middle East. Those countries where very difficult natural and climatic conditions. Helicopters of this class, as the Russian Mi-17, in the West simply do not. Russian machines are distinguished by high reliability in the most demanding conditions of operation, along with the simplicity of their design. This platform, of course, will continue to be modernized, but now it is important to work on the scientific and technical groundwork for the future - in order not to lose the leading positions in helicopter engineering. Therefore, the RACHEL project is very important for Russia.