How is the newest military KAMAZ 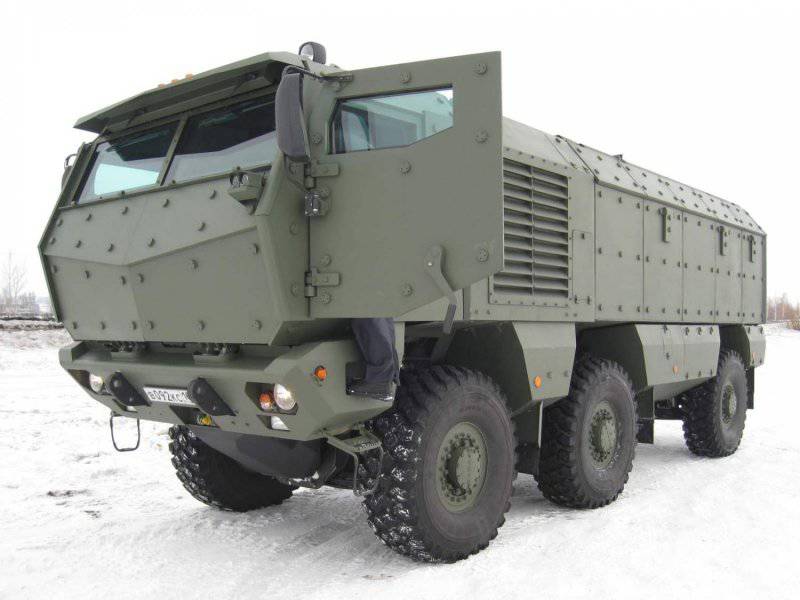 Kamaz trucks and tractors repeatedly and in different historical periods recognized as the best army car in the world. Even the authoritative American analytical magazine Defense Review in its ranking of military vehicles had to put it in first place. But, as it turned out, this is not the limit at all - this year a new development of the Kama plant, which has no analogues in the world in terms of armor protection and versatility - KAMAZ 63968 Typhoon, will go to state tests. This machine withstands explosions of up to 10 kg of TNT, can be controlled remotely from a satellite, quickly launch unmanned aircraft from its roof, and even set up ambushes under water. The Typhoon project is in the top 10 list of US military intelligence priority objectives. The new Kamaz is planned to be adopted by the Russian army next year.


The history of the Typhoon family begins with the 2010 of the year when it was approved by the Minister of Defense “The Concept for the Development of Military Automotive Equipment of the Armed Forces of the Russian Federation for the Period Until the 2020 of the Year”. The concept provides "the development of highly standardized families of armored vehicles." As a result, a single wheeled cargo platform "Typhoon" was created, which provides high protection for the crew, cargo and vehicle components from small arms and land mines. And also on which you can mount various target equipment and create on its basis the necessary modifications - communication vehicles, mobile artillery systems, truck cranes, launch vehicles of unmanned aerial vehicles, tow trucks, excavators and others.

However, this is not a project of the Kama plant, but a cooperative development of more than 120 enterprises of various industries and science. Under the general coordination of the Military Industrial Commission, specialists for the URAL automobile plant, GAZ Group’s Avtodiesel OJSC, KAMAZ OJSC SEC, Steel Research Institute (machine armor), the Federal Nuclear Center in Sarov worked on the creation of Typhoon (calculation of security armored case), Magistral-LTD (creation of an armored glass), MSTU. N. E. Bauman (hydropneumatic suspension) and dozens of other companies and research institutes.

The task of the Ministry of Defense included the requirement of booking a car body in accordance with the 3b level of the NATO STANAG 4569 classification, according to which the car withstands explosive high-explosive fragmentation devices with a mass of 8 kg in TNT equivalent anywhere in the car. Today, this standard is the most complex in the world, only two military vehicles (both American) correspond to it, and their armor technologies are kept secret even from their allies (the Pentagon classification category 1А). But the developers of the Scientific Research Institute of Steel have surpassed the order - tests have shown that our new KAMAZ is able to withstand a blast of up to 10 kg of TNT.

In addition, the bulletproof defense demonstrated compliance with the highest — fourth — level of the NATO classification. A combined ceramic and steel nanostructured armor has been installed, which protects against 14,5 × 114 caliber armor-piercing bullets. - an unsurpassed figure for analogues in the countries of the world. The Typhoon cab is equipped with bulletproof glass 128,5 — 129,0 mm thick with transparency in 76%. Note that the future armored vehicle project for the US Army, which is scheduled for state tests at the end of this year, involves only 72% transparency. Miracle glass, developed by Magistral LTD and tested at Steel Research Institute, withstands 2 shots with a distance between them in 280 — 300 mm when fired from KPVT with a speed of 911 m / s bullet at the time of contact with glass. 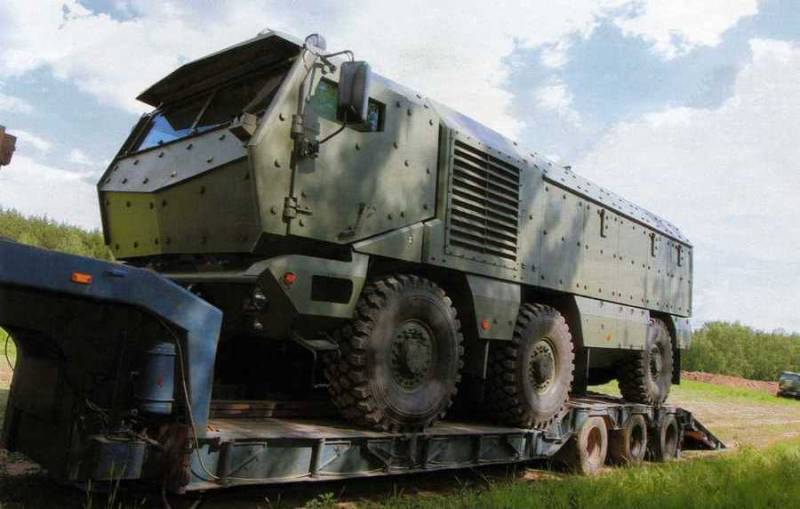 Bullet resistance exceeds the highest requirements for the existing GOST (GOST P 51136 and GOST P 50963), as well as the requirements for the 5 generation armored vehicles to which NATO countries will move in the next 10 years. By the way, according to GOST, the highest level is the shelling of armor-piercing cartridges B-32, 7,62 × 54 mm from the SVD, which the new machine also withstood. Well, of course, it complies with Western standards of the latest level IV STANAG 4569 — guaranteed protection when shelling B-32, 14,5 × 114 mm armor-piercing ammunition from the 200 distance m with a 891 bullet — 931 m / s. Tests have shown that the new Kamaz is not afraid even hit 30-mm ammunition. His tires are also bulletproof - 16.00R20 - with anti-explosion inserts that divert the blast wave, with automatic air inflation and adjustable pressure to 4,5 atmospheres. In the armored module there are embrasures for shooting and equipment for the work of a special machine gun, remotely controlled via satellite communication channel or independently carrying out search and destruction of enemy targets.

In addition, the military noted a special level of comfort and safety inside the case - the seats are equipped with personal weapons, seat belts and head restraints. To reduce the impact of impact from mines / mines, they are attached to the roof of the module. In case of an attack with the use of chemical weapons or a gas attack, inside the filtering unit FVUA-100A is installed, automatically destroying poisonous substances in the air. There are emergency hatches on the roof in case of overturning of the vehicle, as well as a launch-launch complex for unmanned aircraft and helicopters.

The onboard Information and Control System (BIUS) GALS-D1М is installed in the car for monitoring and controlling engine operation, calculating the car’s roll, inclining the road, driving speed, position, etc. It can drive on autopilot and perform combat tasks independently. Independent hydropneumatic suspension allows the driver to change the ground clearance on the go, using the remote control within 400 mm. KAMAZ-63968 is equipped with five video cameras for all-round viewing in the troop module and cockpit integrated into the target detection system, including in the infrared range. When any threat appears in the 5 radius, the system automatically transmits information to the monitors in the cockpit and through the protected satellite channel to the headquarters.