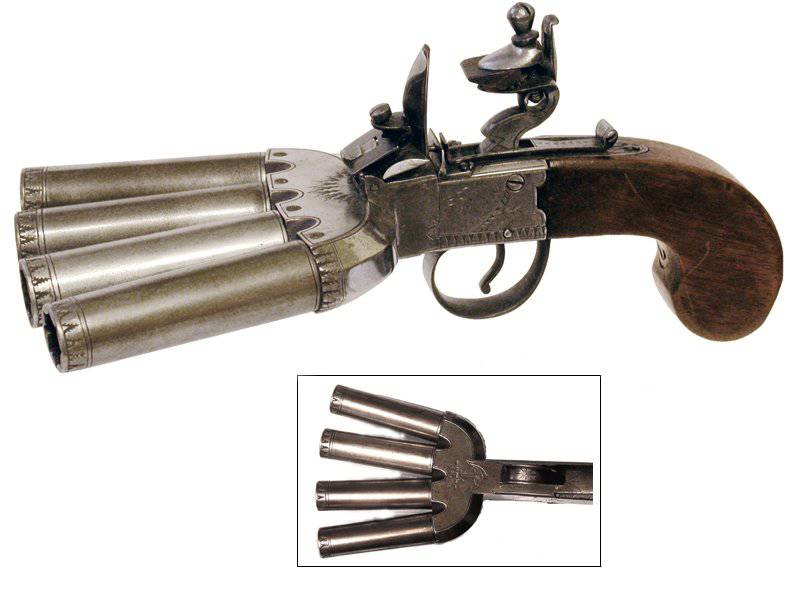 Gun Duck Foot got its name due to the fan arrangement of the trunks, which resemble a duck's webbed foot. The pistol has a single ignition system for all barrels, i.e. This is essentially salvo weapon. The flintlock device is completely analogous to that of flint pistols of boxlock design. Four barrels are located at a small angle to each other, thereby significantly increasing the area of ​​destruction of weapons. The owner of such a gun could kill several opponents at once.

Historians argue that the need for this weapon arose at the end of 18, the beginning of 19 century, when a wave of revolutions and riots swept not only Europe, but also America. However, these guns were used by the guards in the prisons and the captains of the ships, repelling the attacks of the pirates. 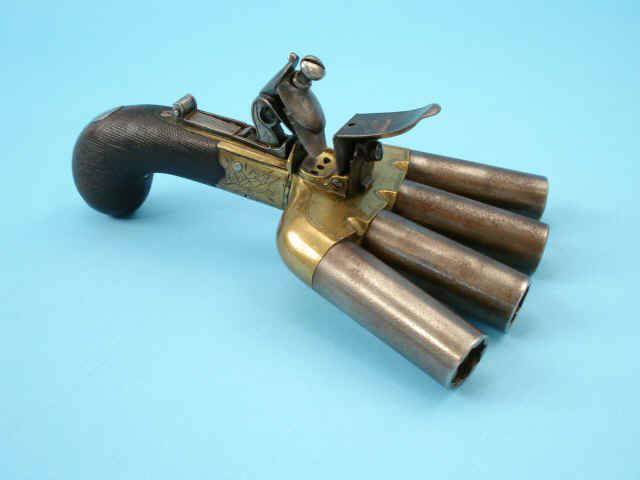 This four-barreled salvo pistol with a flintlock boxlock was made in 1780. The trunks have eight right-inclined rifling. Caliber of tables of the gun 0,52. The barrels are two inches long and screwed into the threaded parts of the gun frame. Steel tables, the frame is made of brass. 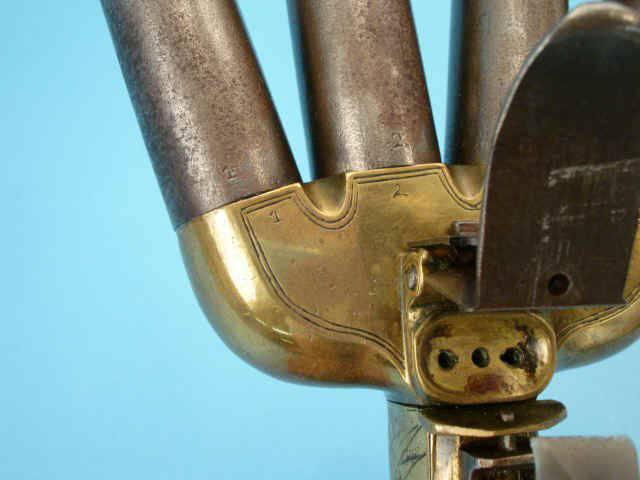 Breech total for all trunks. At the top of the breech there is a powder shelf with three seed holes to ensure a uniform and reliable ignition of the powder charge and give the same speed to the bullets in all trunks. 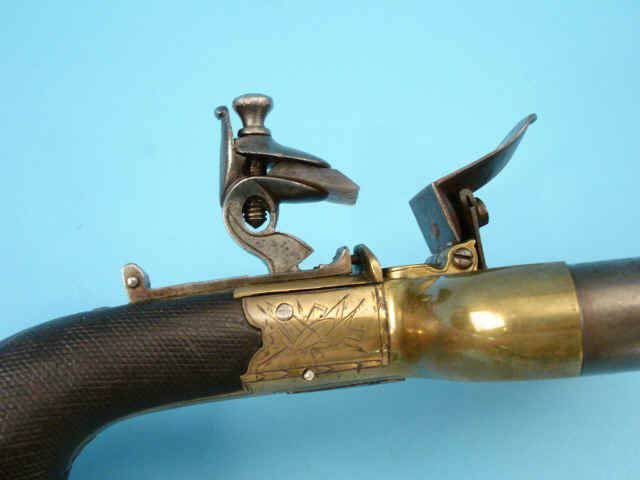 The pistol grip is made of walnut and painted in a dark brown color. A diamond-shaped notch is applied to the surface of the handle. The handle is embedded in the front part of the brass frame and is mounted in it through the screw. 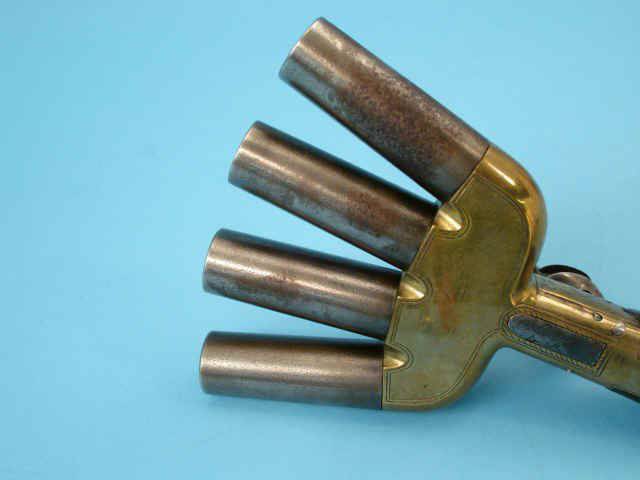 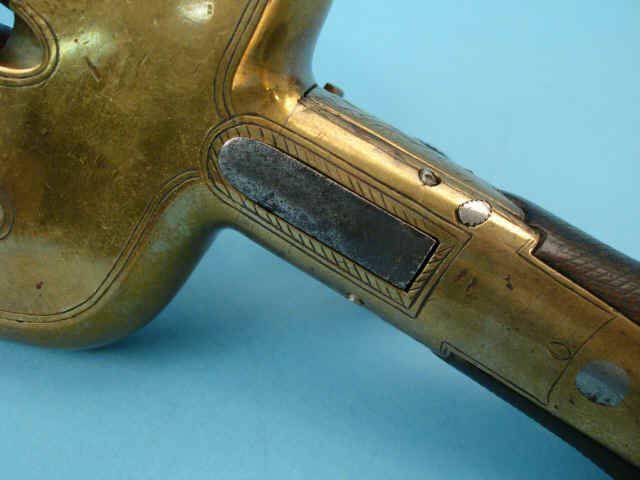 The pistol barrels are located at a slight angle, providing a fan-shaped expansion of the bullets when fired. The trigger gun folding. The steel trigger in the stowed position is placed in a special groove in the brass frame. 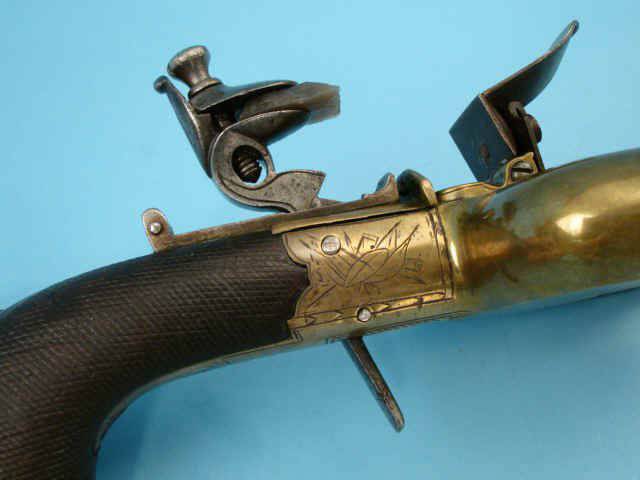 The brass frame on the side surfaces has an engraved pattern in the form of flags and military equipment. 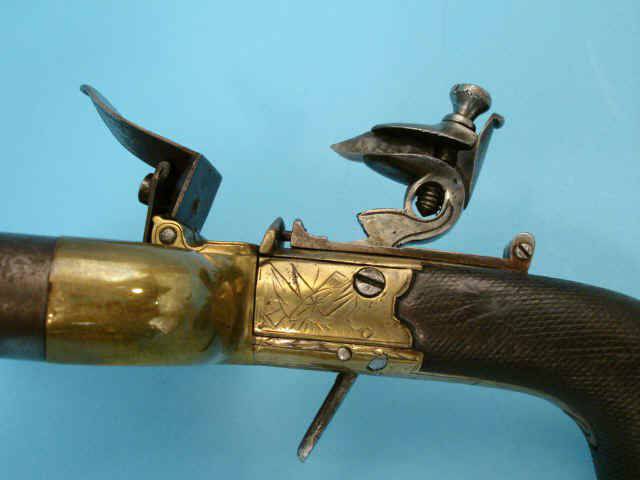 On the left side of the frame is the head of the screw, which acts as an axis for the trigger. At the bottom of the frame on the left there is a pin fixing the left detachable frame cover. 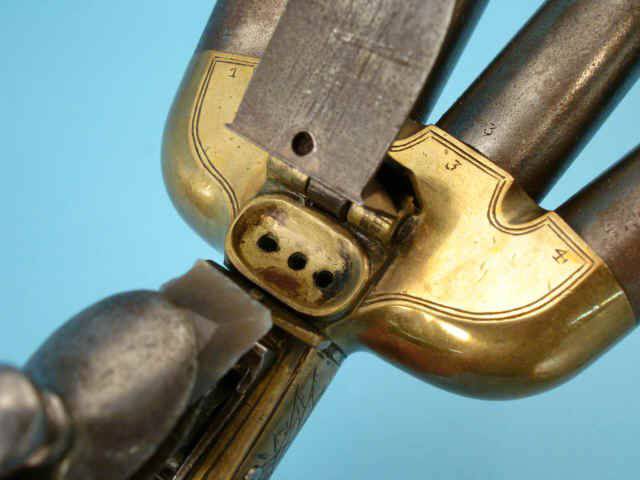 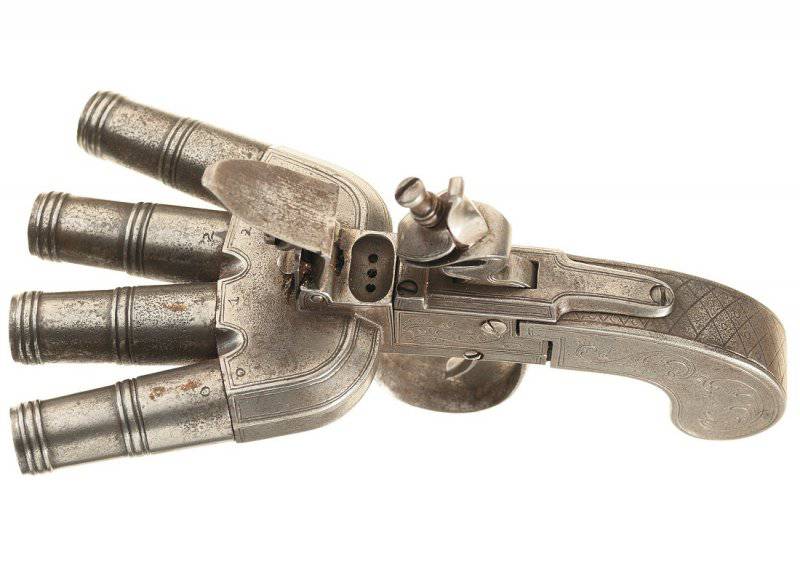 The barrels and breeches of the frame are numbered from 1 to 4, so as not to accidentally mix up when loading weapons. On some Duck Foot pistols, the numbering starts from the “0” number, i.e. trunks and breech numbered 0-3. 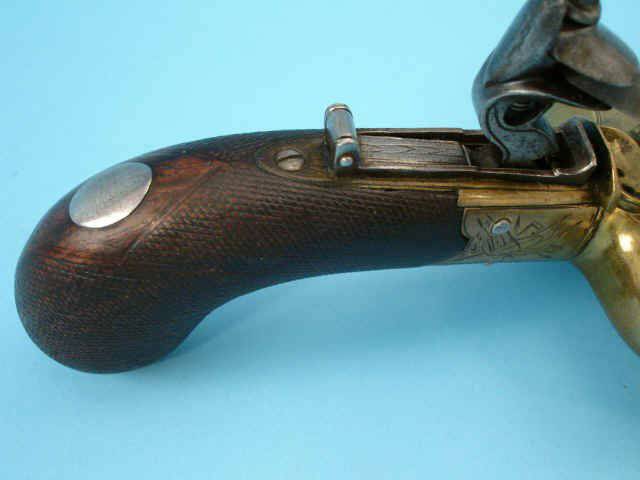 At the top of the gun there is a safety catch locking trigger on the safety platoon. The fuse with its protrusion also closes the lid of the powder shelf, protecting the weapon from an accidental shot.

A gun of a similar design, with five barrels in the 18 century, was also made in Russia, called the “hand of death”, its drawing is given in the book by A. B. Beetle

Below are photos of other Duck Foot pistols released at the end of 18 - the beginning of the 19 century.