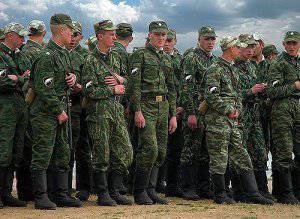 The new money allowance system, which will work in the army from next year, will also be introduced in law enforcement agencies, where the law provides for military service.

This information came yesterday from an inter-departmental working group dealing with the reform of financial payments in the Armed Forces. Landmarks for the revision of the army salaries asked the president of the country. At the recent collegium of the Ministry of Defense, Dmitry Medvedev confirmed that starting from 1 in January of next year, the money allowance for servicemen will grow on average three times and will be at least 50 thousand rubles per month for officers.

The interdepartmental group has already decided on the future structure of such payments. They will be based on a new tariff scale. Not only will the ranks of the servicemen be revised, but also the structure of the allowances. It is assumed that 60 percent of the army salary will consist of salaries according to position and rank, and 40 - from various payments. The extra burden of an officer’s wallet, in particular, is guaranteed by special conditions of service, classiness, and access to secret information. Say, the lieutenant, whom fate has abandoned to the Far North, will be able to claim thousands of 80 per month. Unless, of course, it will be in good faith to command the soldiers and perfectly pass the control checks.

The salary of contract soldiers will also increase. Instead of the current 7-10 thousand, they will receive about 25 thousand rubles a month. For example, they want to put a professional marksman for the position and five thousand for the rank of private. Another 9-10 thousand he will provide allowances. These indicators of the officers will be as follows. Lieutenant, platoon commander: 20 thousand for the position, 10 thousand - for the rank. The regimental commander will have a base pay increase to 40-42 thousand. At the brigade commander - up to 44 thousands.

Well, the generals will feel the most difference. Say, an army commander can count on 54 thousands of “base” rubles. A four-star Deputy Minister of Defense - on 67 thousands.

Taking into account the allowances, the developers of the new system plan to reach such a military salary level: lieutenant - 50 thousand, colonel - more than 60, major general - over 73, lieutenant general - more 90, and finally, army general - about 112 thousand rubles per month . This, we note, is somewhat less than promised by the military. Earlier, army leaders claimed that from next year the same brigade commander would receive about a hundred thousand. It is possible that some parameters will be revised during the evaluation of the financial project in the government and the Kremlin.

And what awaits military retirees? According to the President of Russia, their payments will increase at least 1,6 times. More details yet. But experts say that fundamental changes in the current scheme of military-pension accruals, it seems, are not expected.

This means that payments to retirees will continue to depend on three indicators - the army position, rank and service veteran. Different service charges will not be taken into account.