Three terrible virtues of the Su-24 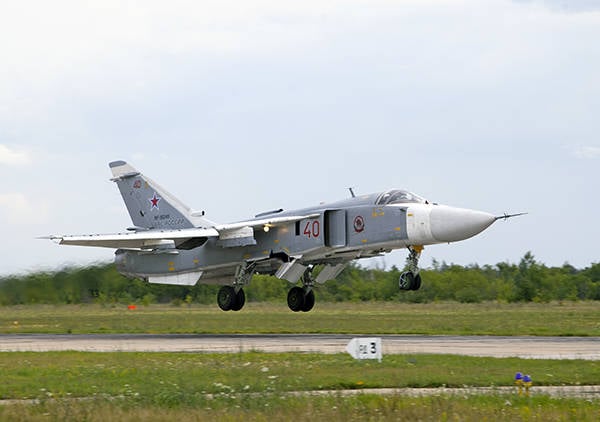 44 a year ago made the first flight of a Su-24 front-line supersonic bomber with variable wing sweep. We learned what frightened NATO with it, what the Fantasmagoria device would do for the plane and where the Su-24 would carry the atomic bomb in the event of a major war.

The flight and combat qualities of the aircraft were appreciated in other countries. "The Su-24 poses the potentially greatest threat to European states among all combat aircraft in service with the front-line aviation USSR Air Force, - wrote the English magazine "Air international". “It has superior performance in terms of combat load / range and is capable of invading while following terrain.”

Of particular concern was the long range of the aircraft, as evidenced by the huge overhead tanks with a capacity of two and three thousand liters. On the external suspension, the Su-24 could carry three liters of fuel in three 8000 tanks. According to Western experts, almost the entire territory of Europe was in the range of the constantly growing Su-24 groupings at air bases in the GDR, the Baltic States and Ukraine.

In NATO, the bomber was named Fencer - fencer.

On eight suspension points, the Su-24 is capable of delivering 7,5 tons of various types of good to the enemy XNUMX: from unguided rockets to half-ton corrected bombs. There are missiles in the assortment of weapons to destroy enemy radars - they are controlled from a container suspended under a bomber with the wonderful name "Phantasmagoria" and are aimed at the target by its radiation.

The aircraft can carry missiles to destroy runways, small ships and surfaced submarines. He has a variety of bombs in his arsenal: for bridges and bunkers, tank columns and scattered infantry.

Su-24 is able to mine the terrain from the air, conduct reconnaissance and aerial photography, transmitting information to the earth via closed communication channels. For defense against fighters, the bomber is equipped with air-to-air missiles capable of attacking the interceptor from any angle. The six-barrel cannon under the bottom, which is covered with a fairing, helps to fight back.

Despite the rich assortment of hanging weapons, the main task of the Su-24 in a serious war is to deliver one tactical nuclear bomb of 150-300 kilotons to the enemy’s rear to destroy an important strategic object - for example, a ballistic missile launcher. The flight characteristics also selected flight characteristics — first of all, the ability of a bomber to fly at supersonic speeds at low and very low altitudes, bending around the terrain and remaining invisible to enemy air defenses.

- At the Su-24 for the first time in the domestic aviation pilot and navigator were next to each other. This is very convenient from the point of view of interaction: the navigator can not only tell something to the pilot on the radio, but also show a gesture. This is especially important when flying at low altitudes, when the situation on earth is changing rapidly, and the time for aiming is reduced to the limit, the pilots said. - On the other hand, such a cabin layout worsens the view: the pilot is on the right, the navigator is on the left. But this is also a question of interaction: the field of view is divided into sectors, and everyone is watching their side.

The aircraft is equipped with wings with variable sweep: from 16 to 69 degrees. The wings are rotated in increments of 5 degrees, allowing the pilot to select the optimal mode for a specific task.

- When flying at ultra-low altitudes, bumpiness is possible due to turbulence. Air perturbations reach the ground, are reflected from it and shake the plane, the pilots continued. - Again, the level of air heating over the field one, above the forest another, over the sea is third. Therefore, any fighter with good handling in this mode will shake. And Su-24 on supersonic with folded wings (sweep angle 69) goes quietly, like a flat iron.

The bomber is equipped with ejection seats K-36, famous for exceptional reliability and not just save the lives of testers and combat pilots. According to its characteristics, the seat guarantees safe ejection at all altitudes and speeds above 70 kilometers per hour.

November 11 1975 of the 63 Bomber Aviation Regiment Su-24 crew was preparing to fly. Was given the command to start the engine. As the engine rotor was unwound, the pressure in the bomber's hydraulic system began to rise and the aircraft control knobs, which were in the rear position, went forward to neutral. Right, navigator pen, in short - so that the radar tube does not interfere with the control of the aircraft - she caught hold of the bailout system check and pulled it out. Unsuspecting navigator Osmanov bomber flew into the air without a plane.

At a regular height, the parachute opened and soon the Ottomans landed safely nearby. After the incident, the aircraft control system was improved. The crew of the bomber, who unwittingly tested the rescue system, received a personalized gold watch from the general designer of the aircraft Pavel Sukhoi and personal protective helmets from the chief designer of the ejection seats Guy Severin.