How to invent liquid powder, or machine gun on kerosene 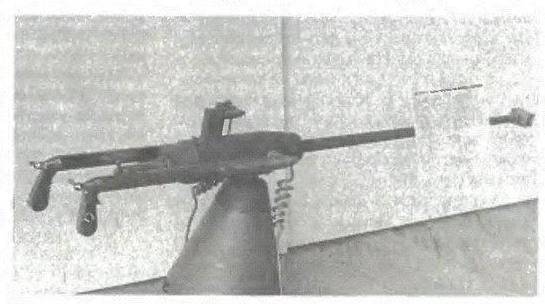 In the summer of 1942 in the village of Bilimbay, a group of engineers at the aircraft factory evacuated from Moscow tried (privately) to find a means of significantly increasing the muzzle velocity and, consequently, the armor-piercing bullets and shells.

These engineers graduated from the Faculty of Mathematics and Mechanics of Moscow State University, knew mathematics and mechanics satisfactorily, but in the field of firearms weapons were, to put it mildly, amateurs. Probably, that’s why they invented a weapon, “firing kerosene”, that if a decent artilleryman, tell him that, then he would only cause a grin.

At first, the long-known electric gun scheme in the form of two solenoids, the fixed part — the barrel — and the mobile — the projectile, was subjected to calculations. The result was such required power that the size and weight of the capacitor grew unacceptably. The idea of ​​a power gun was rejected.

Then one of these engineers, who had previously worked at a reactive scientific research institute in the S. P. Korolev group on powder cruise missiles and who knew about the regressivity of the pressure curve of powder gases in the missile chamber and the bore of the weapon (at the RNII, he sometimes thumbed through Serebryakov’s “Internal Ballistics”) He proposed to design an instrument charged by ordinary powder, but with a charge distributed along the bore in separate chambers communicating with the bore. It was assumed that as the projectile moves along the barrel, the charges in the chambers will in turn ignite and maintain the pressure in the projectile space at about a constant level. This was to increase the work of the powder gases and increase the muzzle velocity with constant barrel length and the maximum allowable pressure in it.

It turned out cumbersome, inconvenient in operation, dangerous, etc., as a result of which the scheme was also rejected. After the war, in a magazine or newspaper, there was a photograph of such a gun, created by the Germans and, apparently, also rejected.

Our efforts were rested in a dead end, but rescued the case. Once, on the shore of a factory pond, a liquid-propellant rocket engine was being tested, tested at a nearby plant, by the chief designer Viktor Fedorovich Bolkhovitinov, where the BI-1, the first Soviet fighter with a rocket engine, was then created.

The rumble of the RD suggested us to use in the firearm instead of gunpowder the fuel of liquid missiles with continuous injection into the projectile space for the entire duration of the shot.

The idea of ​​"liquid powder" attracted the inventors by the fact that the specific energy of the known liquid mixtures, say, kerosene with nitric acid, significantly exceeded the energy of the powder.

There was a problem of injecting fluid into the space where the pressure reached several thousand atmospheres. Rescued the memory. Once upon a time one of us read a translated book from English by PU. Bridgman's “High Pressure Physics”, which describes devices for experiments with liquids under pressure of tens and even hundreds of thousands of atmospheres. Using some ideas from Bridgman, we came up with a scheme for supplying liquid fuel to the high-pressure area by the force of this very pressure. 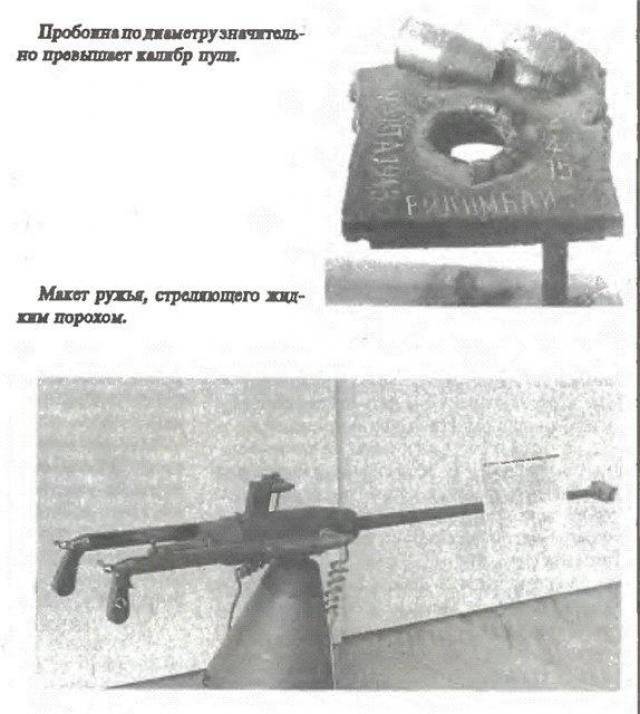 Having found the schematic solutions to the main issues, we started designing a liquid weapon (unfortunately, immediately automatic) for a ready-made barrel of a Degtyarev anti-tank gun of caliber 14,5 mm. They carried out detailed calculations, in which my now deceased comrade in RNII, a prominent scientist-engineer Yevgeny Sergeevich Schetinkoi, who then worked in the design bureau of V.f. Bolkhovitinov, provided invaluable assistance. Calculations yielded encouraging results. Quickly made drawings of the "liquid automatic weapons" (JAO) and put into production. Fortunately, one of the co-authors of the invention was the director and chief designer of our plant, so the prototype was made very quickly. Due to the lack of regular bullets, the PTRD sharpened self-made red copper, loaded their weapons and 5 March 1943 of the year in a dash made of casings of destroyed cupolae (the aircraft factory was located on the territory of the former pipe mill) tested a “kerosene” machine gun. An automatic queue of shots should have followed, equal to the number of bullets invested in the magazine box. But not followed. There was only one, judging by the sound, a full shot.

It turned out that the column of bullets in the barrel was subjected to such pressure of gases from the side of the projection space, which jammed the mechanism of automatic feeding of bullets and a component of liquid fuel.

The mistake of the inventors who decided to create a machine gun immediately before the finishing of the single-shot system was noted in his (mostly positive) review of the invention of the deputy. Artcom Chairman, Lieutenant General E.A. Berkalov. We immediately took it into account.

The red copper bullet of the first liquid shot pierced the 8-mm steel plate and was stuck in the brickwork to which the plate was leaning. The diameter of the hole significantly exceeded the caliber of the bullet and had, from the side of the impact, the crown of steel that was clearly visible in the photo was facing the bullet, which was reformed into a “mushroom”. Scientists artillerymen decided that the splash of material at the entrance of the bullet into the plate, apparently, should be explained by the high meeting speed, as well as the mechanical properties of the plate and the bullet.

The model of the weapon from which, according to artillery scientists, the first in stories Shot liquid "powder", stored in the museum of the plant.

After the first, not quite so successful (automaton failed) test of automatic liquid weapons on March 5th 1943, we started working out a shotgun from a PTDD with a unitary cartridge filled with liquid fuel and oxidizer components instead of gunpowder. For a long time homemade copper bullets were fired, but with the return of the plant from the evacuation of 1943 to Moscow in the summer, with the help of the workers of the Central Committee, I. D. Serbin and A.F. Fedotikov, received a sufficient number of regular anti-tank rifle cartridges and began firing "liquid powder" already on armor plates of armor-piercing incendiary bullets. Bringing the thickness of the punched plates to 45 mm, the charge from 4 grams of kerosene and 15 grams of nitric acid, instead of 32 grams of regular powder charge, we made a detailed report and sent it to Stalin.

... time has passed. And once, after a number of approvals, links with the plant, with the Scientific Research Institute of the Ammunition Narkomat, we finally received an invitation to be defended by one of the employees of this Research Institute, Doblisham, the thesis on the topic “Internal ballistics of a gun ...” (the surname of one of the inventors - according to the tradition of gunsmiths: “Mosin rifle”, “Kalashnikov assault rifle”, “Makarov pistol”, etc.). Protection was successful. The authors of the invention were mentioned in the report, the applicant noted their merit. More years passed, about ten years after the invention of the JAO, the authors were invited to defend the second dissertation. At this time, adjunct of the Academy of Lieutenant Colonel I.D. Zuyanova on the topic with a title about - "Theoretical and experimental studies of artillery systems on liquid explosive mixtures." The authors of the invention read with pleasure in the abstract of thesis I.D. Zuyanoea their names, the good word. The dissertation was led by Professor I.P. Grave.

The secretary of the party committee of our plant, N.I. Shishkov. A. A. Tolochkov after the debate, after the speech of Professor I.P. Grave gets up and that the leaders of the liquid weapons are in the hall and that he asks one of us to share with the academic council information about how we began our brainchild. The people applauded amicably, but our comrade, whom we were whispered instructed to perform, as he could, the soul went to the heels. But there is nothing to do, he went and spent twenty minutes telling how, where and why the idea of ​​a liquid weapon was born and how it was realized at its initial stage. Presumably, theses TT. Dobrysha and Zuyanova are stored in the VAK archive, and our report, with all our "drawings, calculations and firing results of kerosene-acid charges, sent to Stalin, lies in another archive, possibly Artkom. I hope that the meeting’s protocol, which was held by A .A. Tolochkov in the People's Commissariat of Arms.

We don’t know what the fate of our invention is, but we know from the foreign open press that since the 70-s many patents and papers have appeared in the USA, England and France on the subject of firearms on liquid fuel.

The persons known to me who have contributed to the work on liquid weapons, in alphabetical order: Baydakv G.I. - Director of the branch of the above-mentioned aircraft factory. Berkalov. E.A. - Lieutenant-General, Deputy Chairman of the Art Committee, Grave I.P. - Major General, Professor of the Academy, Grichenko G.Е. - Turner plant, Dryazgov MP - beg. brigades of the OKB plant, Efimov AG - Turner factory. Zhuchkov D. And - early. laboratories of the plant, Zuyanov I.D. - lieutenant colonel, adjunct of the Academy, Karimov XX - engineer-calculator of the OKB of the plant, Kuznetsov E.A. - design engineer of the OKB of the plant, Lychov VT. - plant fitter, Postoe I "- plant fitter, Privalov AI - director and public designer of the plant, Serbia ID - worker of the Central Committee of the party, Sukhov A.N. - plant fitter, Tolochkov AA - major general, deputy. NTK Armed Forces Commissariat, Fedotikov AF - an employee of the Central Committee of the Party, Shchetknkov ES - the engineer of the OCH of an aircraft factory, headed by VF Bolkhovitinov.

PS Everything would be fine ... But many years ago it turns out that lieutenant-colonel I. D. Zuyanov, who became a candidate of sciences for the JAO, found that his dissertation in the archives of the VAK was overwritten. That is, someone has studied it. Who - not installed. And Lieutenant Colonel Zuyanov no longer ask, he died.