In Russia, for the first time disposed of ships atomic technology services

January 16 2014
23
The state corporation Rosatom decided to dispose of four nuclear maintenance ships that had previously been decommissioned fleet. It is worth noting that earlier in our country, such ships after the end of their life simply flooded. In the days of the USSR, the Russian Navy did not deal with the complex procedure for the safe disposal of such vessels. And soon (for the first time in the post-Soviet years), Rosatom is going to dispose of the four ships transferred to it in a safe manner. Disposal has already begun for civilian vessels, and for four ships from the Northern Fleet it will begin after 2017.


For military ships, safe disposal will be applied for the first time in Russia stories, for civilian ships, the operation has already begun - in 2014, Rosatom began to dispose of the Volodarsky mother ship (from 1991, solid radioactive waste was stored on the ship). For the elaboration of the necessary technical documentation for the disposal of 4-x ships of the Rosatom Navy for 3-x years is ready to allocate up to 25,8 million rubles.

The problem for Russia is more than urgent, since the fleet of the USSR surpassed the fleets of all countries, including the USA, in the number of built atomic ships. Only in the period from 1955 to 2000 years in the USSR and Russia was launched 5 ANK - nuclear surface ships, 260 nuclear submarines - nuclear submarines, 8 nuclear icebreakers, 1 nuclear light carrier (container). All of these ships were built either in a single copy or in small batches. The Russian nuclear fleet consisted of more than 30 various types of ships and vessels of major projects. To service this nuclear fleet in the USSR, an auxiliary fleet or vessels of the anti-terrorist operation — the vessels of atomic-technological services — was created. This fleet was represented by both specialized vessels, which are intended for direct servicing of nuclear vessels, and ships re-equipped for this purpose (from serial dry-cargo ships, tankers, timber carrying vessels and barges). 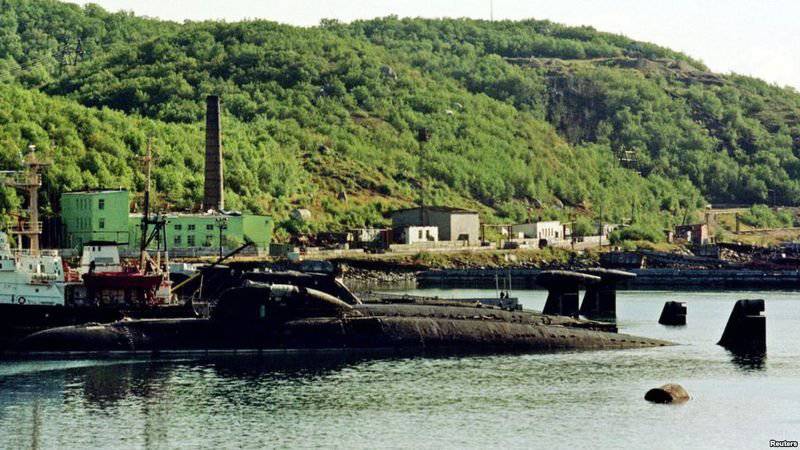 Currently, the number of ATO ships in Russia (including also floating tanks) is more than 90 units. And these are ships of various purposes and classes. By the number of such vessels, Russia occupies a leading position in the world. The reason for this mass character is the numerous points of deployment and repair of atomic ships scattered throughout the vast territory of the country. Most of them are not well developed in terms of transport communications (in some places they are absent altogether) in the form of railways and highways. To this can also be added an under-developed coastal infrastructure for the management of radioactive waste (RW) and spent nuclear fuel (SNF).

Until recently, nuclear technology service (ATO) vessels, which served their time, were simply flooded in the world ocean. The burial of such ships was carried out in the 6 areas of the northern and 4 areas of the Far Eastern seas. According to information from environmental experts from the Bellona association, about 60 vessels, which present a radiation hazard, were flooded in the waters of the Russian seas. Most of them belonged to the Navy.

The Pinega and Amur technical vessels that left the Navy (were engaged in transporting and cleaning nuclear fuel from nuclear submarines and ships), as well as PKDS-14 and PKDS-9 (were engaged in measuring radiation levels) are going to be disposed of after 2017. This information is in the documents of "Rosatom", which hit the Russian media. Alexander Nikitin, chairman of the board of the non-profit environmental organization Bellona, ​​told reporters about the possible difficulties with the disposal of such ships using the example of the civilian vessel Lepse, which Rosatom intends to dispose of in the near future. Onboard the Lepse is spent nuclear fuel, but it is impossible to unload it with regular means. Therefore, it is planned to cut the hull of the vessel and gradually extract fuel from it, which, being packed in special containers, will be sent to the Chelyabinsk Region to the Mayak plant. 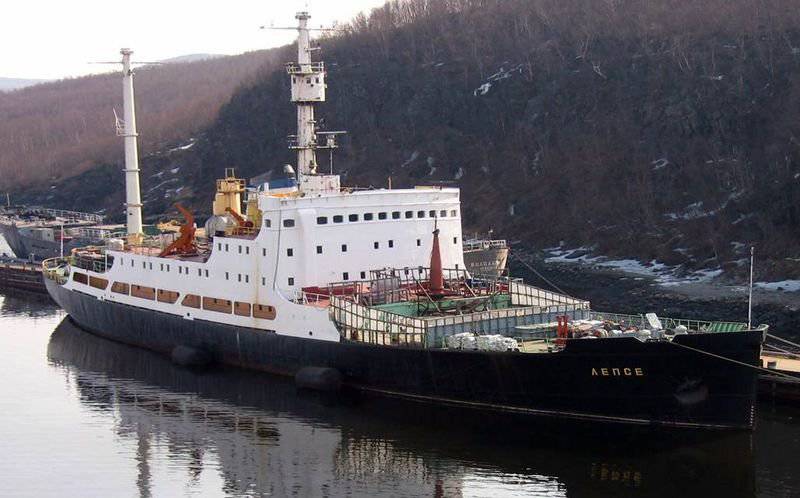 According to Alexander Nikitin, after the disposal of the Lepse, the function of the transportation and unloading of spent nuclear fuel will be taken over by the modern ship Rossita, which was commissioned in the 2011 year. The ship was specially designed for this purpose and was built by the Italians. Currently, Rossita is based in Murmansk. According to the ecologist, the capacity of this ship is enough to transport spent nuclear fuel in the deployment areas of the Russian Northern Fleet. At the same time, according to Nikitin, in the Far East for the same purpose the Soviet unique specialized vessel can be successfully used. This ship is quite enough, since the volume of SNF in the Far East is small.

Vladimir Zakharov (rear admiral in retirement) believes that the transfer of tasks for the disposal of technical vessels to the specialized structures of Rosatom will allow the Russian military fleet to focus on the performance of its main combat functions. The Russian Defense Ministry cannot do everything at once, the retired admiral stressed.

The first ships of the storage of spent nuclear fuel in the Soviet fleet appeared in the 1960-s. At that time, the first Soviet nuclear-powered icebreaker "Lenin" and the first nuclear-powered submarines began work on the replacement of reactor cores, which by that time had developed their passport resources. The main location of such ships was the Russian North, where most of the submarines and surface ships with nuclear power plants on board carried their watch. Ultimately, floating storage facilities, which played a role, themselves began to pose one of the main threats to the ecological situation in the Arctic. 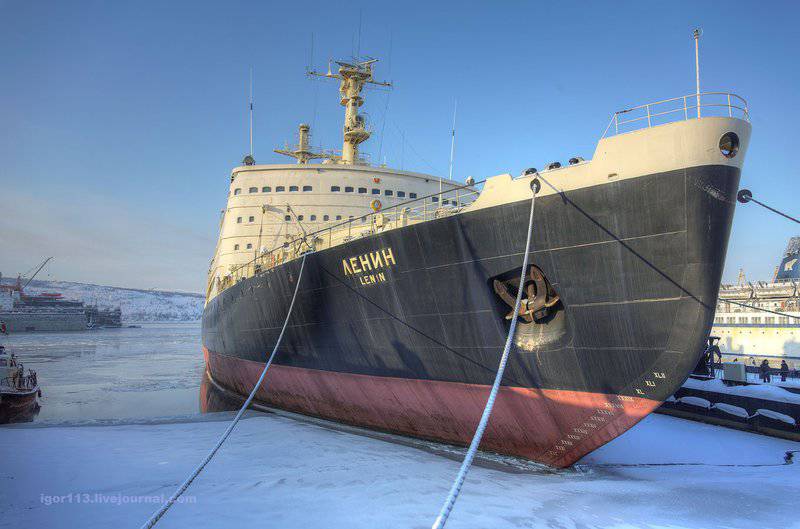 One of the most famous examples of the history of such vessels can be considered the floating base "Lepse". The dry-cargo ship built back in 1941 was the first ship in the Soviet history to support the nuclear fleet. In the 1961, the cargo ship was converted into a reactor core recharging vessel. Over the next twenty years, this ship made 14 operations to recharge the cores of nuclear power plants, including the nuclear-powered icebreakers Lenin, Sibir, and Arktika. At the same time, in the 60 of the last century, an accident occurred aboard the Lepse, as a result of which the fuel assemblies were partially destroyed. These assemblies were previously unloaded from the onboard icebreaker "Lenin". The consequence of the accident was the increase in radiation levels in the compartment where the unloaded assemblies were located, as well as in the adjacent compartments of the vessel. It was not possible to unload these rods from the ship, therefore in 1981, the ship was finally converted into a vessel for storage of liquid radioactive waste and spent nuclear fuel (SNF).

In 1984, a second accident occurred on board the vessel. During the storm, liquid radioactive waste was released, which infected the vast majority of compartments on the ship. After that, it was decided to decommission the ship, but the withdrawal process was delayed for almost three decades: in those years there was simply no technology for safe disposal of such objects. Currently, 639 fuel assemblies with spent nuclear fuel are stored onboard the vessel, a total of 8 kg of Pu-239 plutonium, more than 260 kg of U-235 uranium and 156 kg of fission products. To get the listed emergency assembly in a regular way is not possible. That is why the ship "Lepse" as the most complex object had to play the role of the firstborn when disposing of afloat nuclear burial grounds.

In December 2013, after carrying out the preparatory work, the ship was moored to the pier of the Nerpa shipyard. At the factory, from the ship they will have to cut off all the superstructures, as well as prepare Lepse for installation on the slipway for the final breakdown. It was decided to isolate the infected compartments of the ship with a special coating, and then cut them into blocks of transported size. These blocks are planned to be placed in sarcophagus containers, in which they will be sent to the Mayak plant for long-term storage. 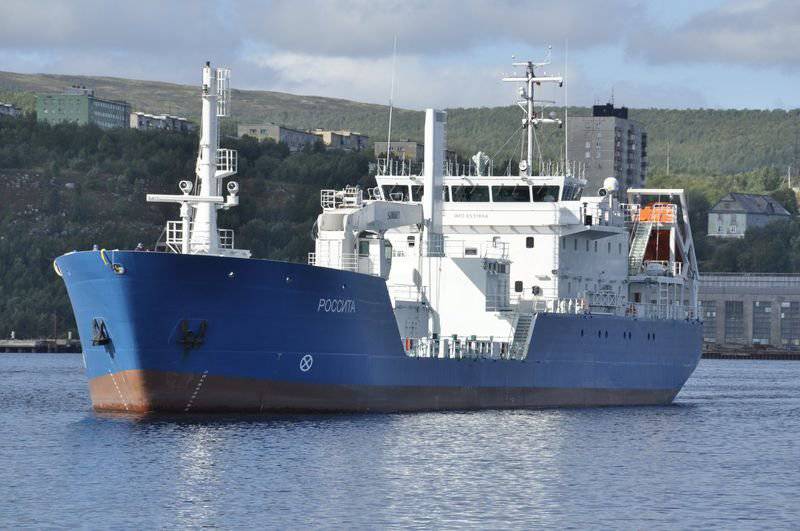 In general, the operation for the disposal of nuclear waste today does not seem to be any difficult task. The delay in the work on the Lepse, as well as other similar ships, was largely due to the lack of necessary funding, as well as related personnel and infrastructure problems of the 1990-2000 years. However, at present, the situation has changed dramatically: the timeframe for disposing of the spent SNF storage facilities was determined and the necessary funding for these activities was provided.

In the near future, Rosatom will deal with the unloading and storage of SNF from both the civil fleet and warships. It should be noted that in the next decades the volume of work on these programs will only decrease. This is due to the fact that most of the Soviet nuclear submarines and ships have already been disposed of. A new generation of nuclear submarines will be, firstly, not so much, and secondly, the reactors installed on them have a significantly longer service life - up to 25 years instead of 10 years earlier. All this, combined with the creation of new technologies for the safe disposal of spent nuclear fuel, suggests the resolution of the “atomic ecological crisis”.

Ctrl Enter
Noticed oshЫbku Highlight text and press. Ctrl + Enter
We are
The cruisers of the 68 bis project: the Sverdlov missions in the post-war fleet of the USSR. 3 partDestroyers Ave 956. Overview of the technical condition
Military Reviewin Yandex News
Military Reviewin Google News
23 comments
Information
Dear reader, to leave comments on the publication, you must sign in.