Made in USSR: cosmonaut laser pistol 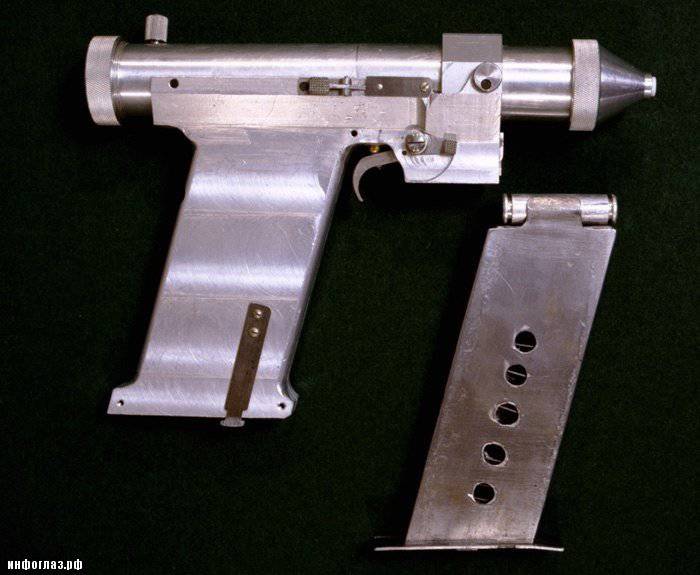 During the Cold War, political tensions were high and sometimes reached marasmic limits. And the idea of ​​“Soviet cosmonaut” against “American cosmonaut” seemed quite real. Therefore, it was necessary to arm our compatriots not only in case of landing in remote corners of our planet (for this, our cosmonaut had - SONAZ (small weapon wearable emergency stock) TP-82, and the American astronaut has the knife "Astro 17") but also in case of direct confrontation.

Let's see what kind of weapon the Soviet cosmonaut would have to wield according to the plan of the scientists of that time ...

The first weapon that went into space was the Makarov pistol, which had entered the cosmonaut’s emergency supply since Yuri Gagarin’s flight. Since 1982, it has been replaced by a specially designed for survival and self-defense in an emergency landing SONAZ - “small arms of a portable emergency reserve”, also known under the marking TP-82, astronaut's three-barreled pistol.

The Americans approached the problem more easily and decided to equip their astronauts with classic survival knives, called Astro 17, made in the style of the legendary Bowie knife. 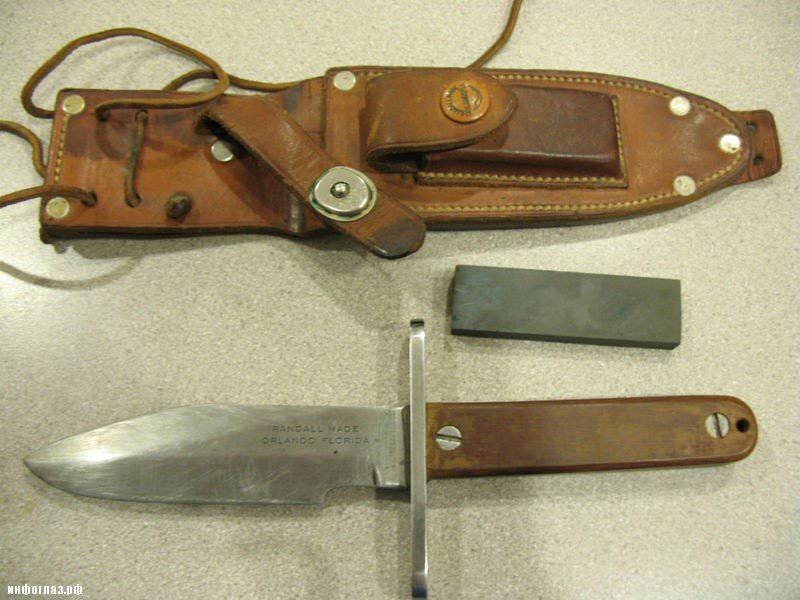 The first attempts to create a weapon, of which the laser beam was a striking factor, were made back in the 1970s, both in the USA and in the USSR. However, this task was difficult to implement with regard to the NTP of that time. During development in the USSR, it was originally decided that this weapon would not be lethal. Its main purpose was self-defense and disabling electronic and optical systems of the enemy.

In 1984, in the framework of the Almaz program, the Salyut, from the satellite inspectors and interceptors of the potential adversary in the Military Academy of the Strategic Missile Forces (RVSN), was designed -this fantastic weapon is a fiber laser gun.

The research team was headed by the Head of the Department, Honored Scientist and Technician of the RSFSR, Doctor of Technical Sciences, Professor, Major General Viktor Samsonovich Sulakvelidze. Boris Nikolaevich Duvanov, a doctor of technical sciences, professor, was engaged in theoretical and experimental research on the damaging effect of a laser pistol. Researcher A.V. worked on the drawings. Simonov, the researcher L.I. Avakyants and associate V.V. Gore

Designers set as their goal the development of compact weapons for disabling enemy optical systems. 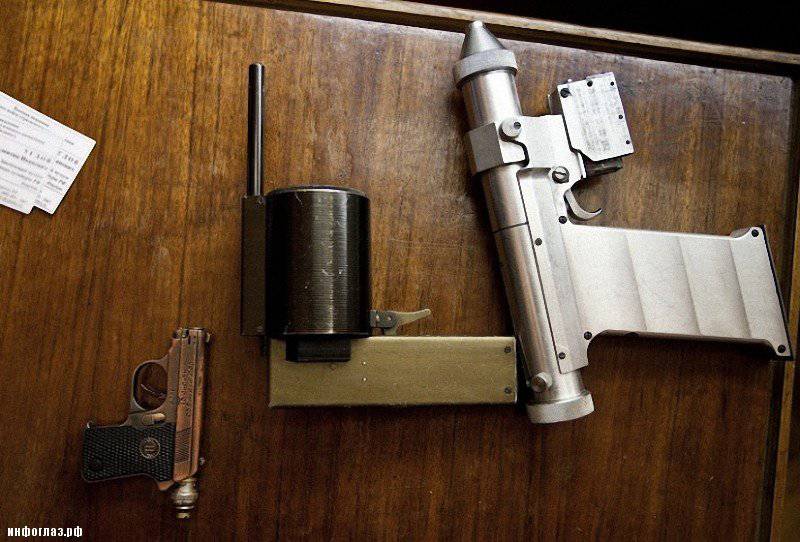 At the first stage of development, the authors of the future invention found that for this purpose a relatively small radiation energy is enough - within 1 - J. 10 (allowing the enemy to be blinded by the way).

As a source of optical pumping, pyrotechnic flash lamps were used, which have sufficient energy and at the same time are very compact.

The scheme of work was simple and reliable: the pyrotechnic flash lamp follows the construction of a conventional cartridge of the caliber 10 mm, placed by the gate from the store into the chamber, which is a lighting camera. Through an electric piezo pulse in the cartridge ignites a mixture of zirconium foil and metal salts. As a result, there is a flash with a temperature of almost 5000 ° C, this energy is absorbed by the optical elements of the gun behind the lighting chamber and converted into a pulse. Weapon 8-mi charger is not automatic - reloading is done manually. The striking ability of the released beam is up to 20 meters. 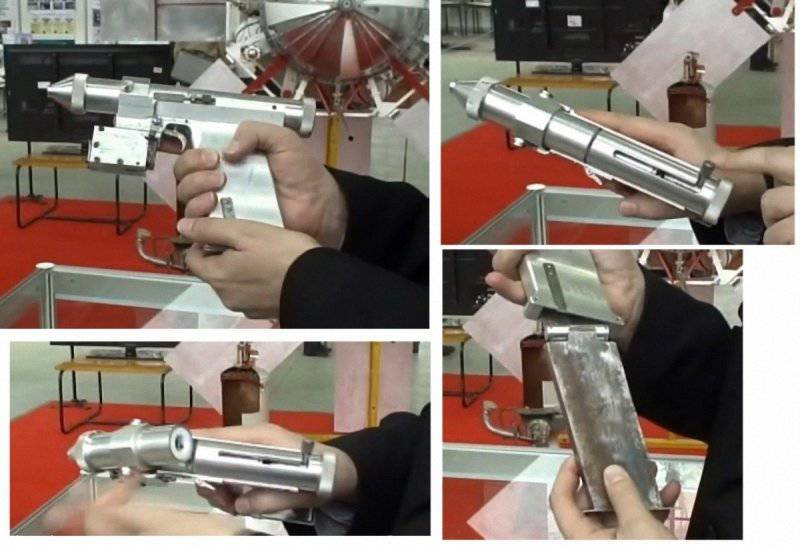 A laser revolver was also developed, which, unlike a pistol, has the ability to fire with a self-coder, but the 6 was charged.

The main elements of the laser gun, like any laser, are the active medium, pump source and optical resonator.

As a medium, designers first chose a crystal of yttrium-aluminum garnet, generating a beam in the infrared range at a relatively low pump power. The mirrors sprayed on its ends served as a resonator. For optical pumping, a compact gas-discharge flash lamp was used. Since even the most compact power source weighed 3 - 5 kg, it had to be placed separately from the gun. 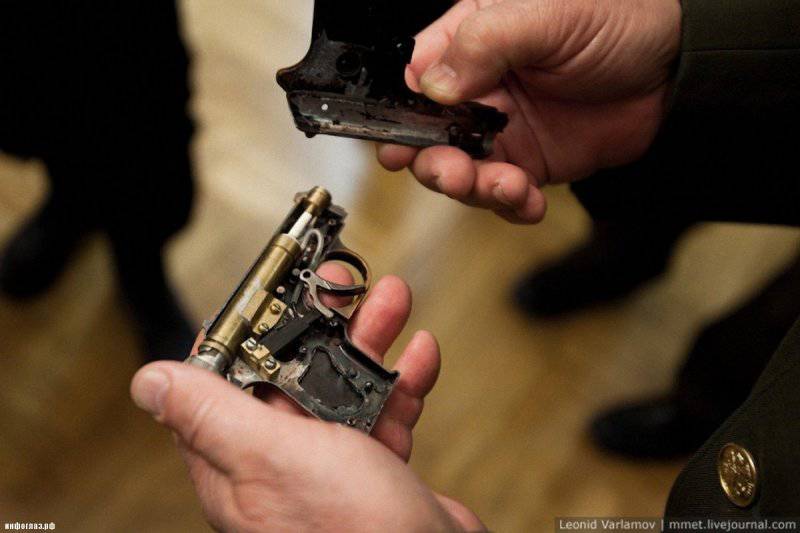 A single-shot prototype of a laser weapon built into the body of a lighter gun.

At the second stage, it was decided to replace the active medium with fiber-optic elements - in them, as in a garnet crystal, the radiation was initiated by neodymium ions. Due to the fact that the diameter of such a “thread” was approximately 30 μm, and the surface of the harness assembled from its segments (from 300 to 1000) was large, the lasing threshold (the lowest pump energy) decreased, and the resonators became unnecessary.

The case remained for a compact source of optical pumping. As it was decided to use disposable pyrotechnic flash lamps.
Each ten-millimeter cylinder housed a pyrotechnic mixture - zirconium foil, oxygen and metal salts and a combustible paste of tungsten-rhenium filament to ignite it.

Burned by an electric spark from an external source, such a lamp burns out in 5-10 milliseconds at a temperature of the order of 5000 degrees in Kelvin. Thanks to the use of zirconium foil, the specific light energy of the pyrotechnic lamp is three times higher than that of ordinary samples that use magnesium. Added to the mixture of metal salts "customize" the radiation of the lamp to the absorption spectrum of the active element. Pyrotechnic mixture is non-toxic and not prone to spontaneous detonation. 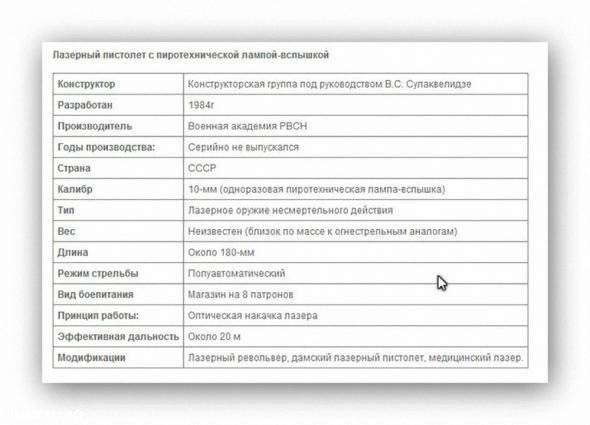 Eight flash lamps are located in the store, similar to a fire pistol ammunition. After each “shot”, the spent lamp is ejected, like a cartridge case, and the next ammunition is fed into the lighting chamber. The source of energy for electric ignition is the “Krona” type battery fixed in a special guide under the barrel.

The fiber-optic active element absorbs radiation from a burning lamp, which causes a laser pulse in it, directed through the barrel of the gun to the target.
The beam fired from the barrel of the weapon retains its burning and blinding effect at a distance of up to 20 meters.

On the basis of a laser pistol with a pyrotechnic flashlight, a laser revolver with a drum magazine with a capacity of 6 cartridges and a single-shot ladies' laser pistol was designed.

The developers claimed the possibility of modifying a pistol from a military weapon into a medical instrument (apparently, this required the replacement of an optical pumping source).

All experimental work was done manually. At the end of research at one of the enterprises, serial production of lamps was already under way, but the conversion of the defense industry put an end to the development of the project. The production line was curtailed, however, the work on inertia still continued, but until the end of the produced lamps.

At present, a laser pistol with a pyrotechnic flashlight is recognized as a monument of science and technology of the 1 category and is on display at the Museum of the Peter the Great Strategic Missile Forces Military Academy. 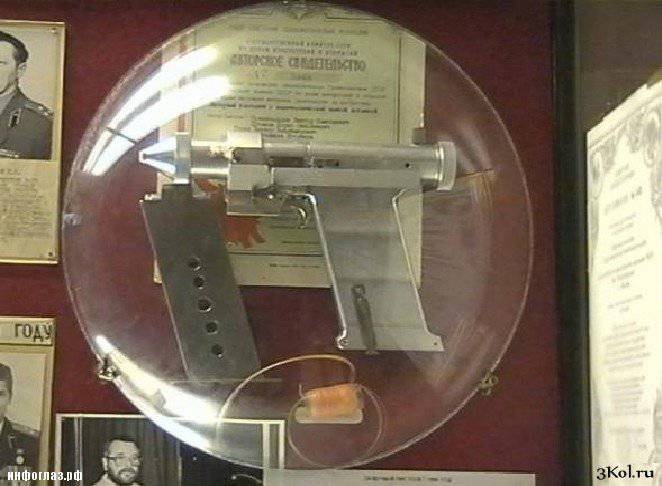 About the gun after the second minute: