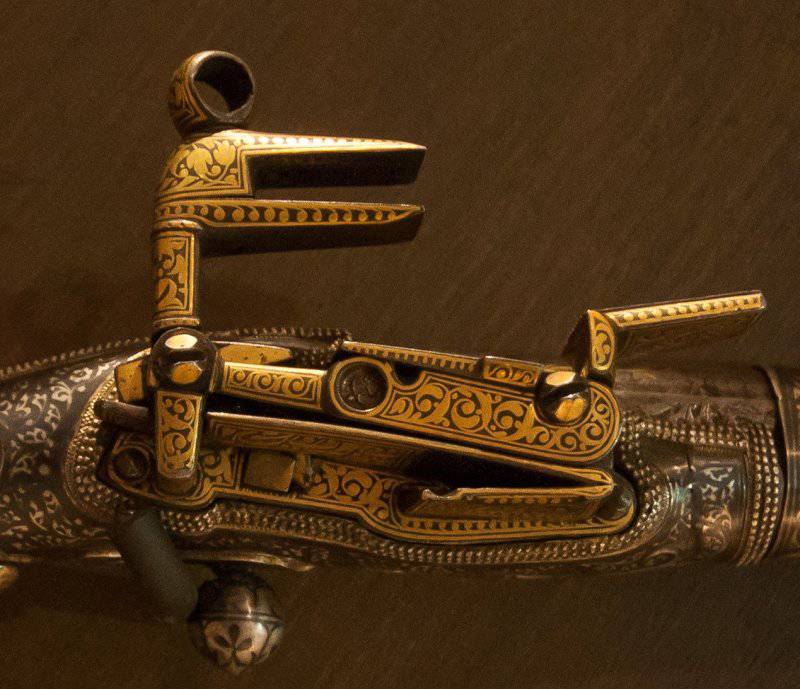 Caucasian flintlocks belong to the Mediterranean type of castles, which are often called the miquelet lock. Similar locks were widely used in Spanish weapons and weapons of the Ottoman Empire. Probably the proximity of Turkey and influenced the design features of the Caucasian flintlocks and Caucasian weapons in general. E.G. Astvatsaturian in his book “Weapons of the Peoples of the Caucasus” divides the Caucasian castles into three main types: Cuban, Circassian and Transcaucasian. Each of these varieties can be associated with one of the varieties of Turkish castles. We will not describe in detail the difference between each variety from each other due to the fact that the author did not find a sufficient number of illustrations of these differences. We only point out that the main difference between the Circassian flintlock castles from the Turkish ones is their insignificant design features, the lower massiveness of the Circassian castles, as a rule, the absence of exquisite decorations on the surface of the Circassian castles compared to Turkish ones. 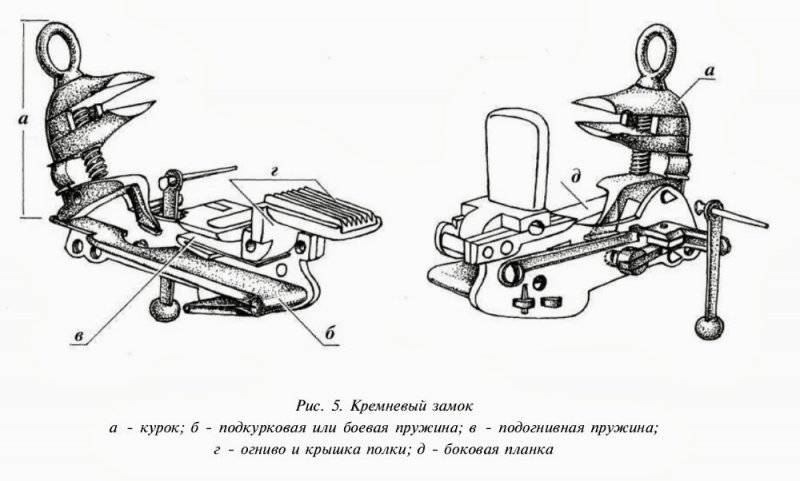 Structurally Circassian locks differ from the Turkish form of sponges, and the form of flint. In Circassian locks, sponges are usually thinner and somewhat elongated. Flint Circassian castle most often has a rectangular shape, Turkish flint more curved, almost oval in shape. 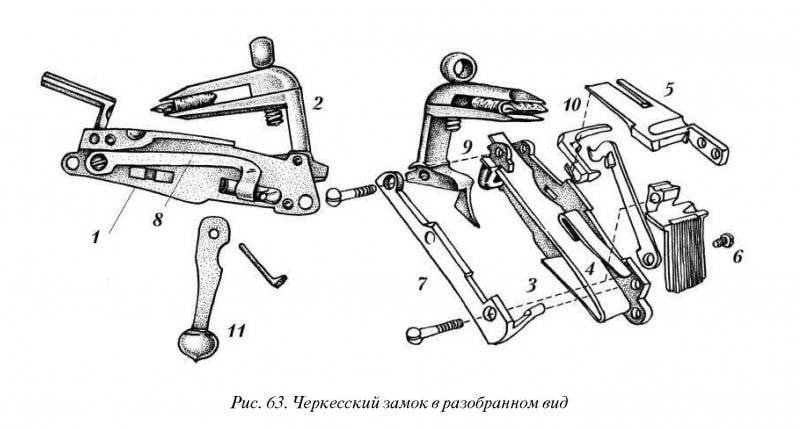 The trigger mechanism of the Circassian flint weapon consists of a keypad (1), a trigger (2), a combat spring with two feathers (3), a adjusting spring (4), a powder shelf (5), a composite fire, in the upper knee of which a plate is installed with grooved surface (6), side bar (7), figured trigger spring - perks (8), angle trigger stiffener (9), trigger lever (10), trigger hook - ball or button (11). 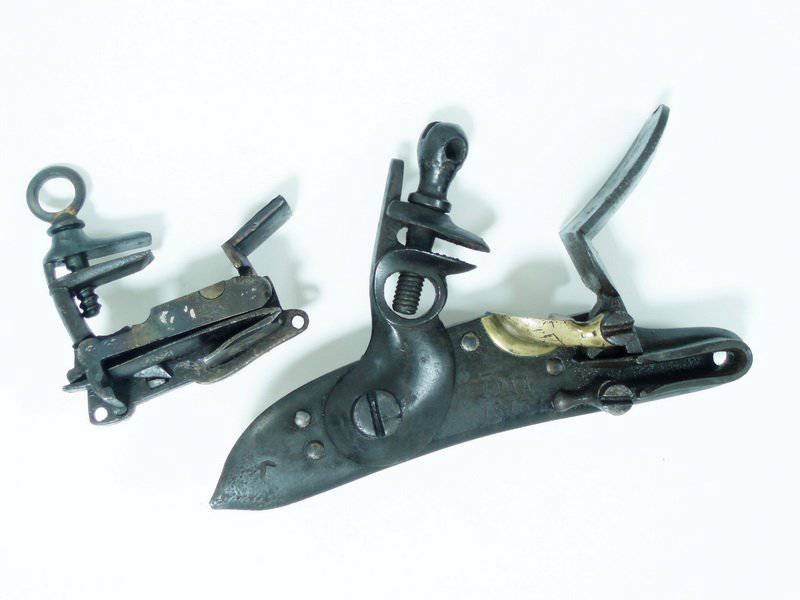 Caucasian flint locks are usually much smaller and lighter than conventional battery locks (French type locks). This is primarily due to the design feature - the location of the mainspring on the outer surface of the keypad. However, the external location of the mainspring contributes to its possible deformation upon striking the weapon, the impact of precipitation on the metal of the spring and the likelihood of contamination of parts of the lock, which over time affects the precise operation of the lock and the weapon as a whole. 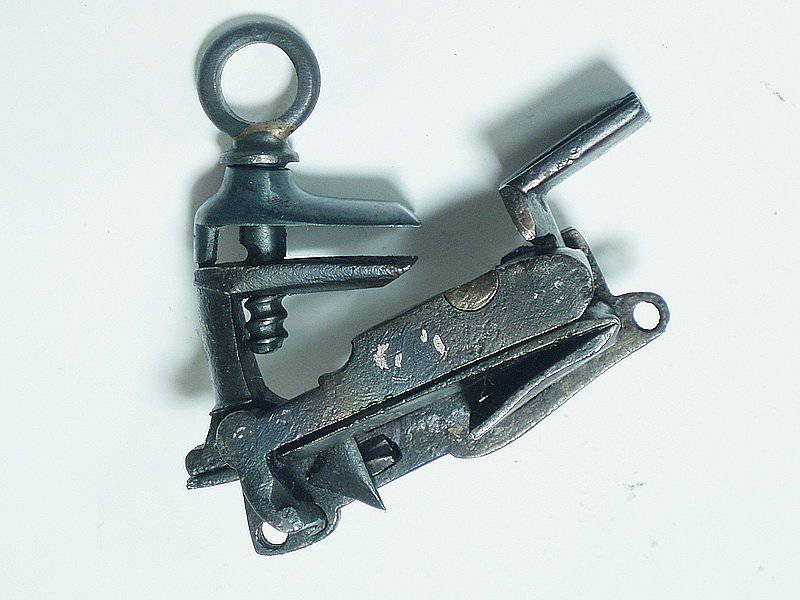 We illustrate the structure and operation of the lock using the example of a miklelet having a total length of 56 mm, height of 64 mm and width of 19 mm. The lock spring is located on the outer surface of the keypad. The short spring spring has a protrusion that fits into the keypad hole. Long feather spring rests on the lower part of the heel of the trigger. 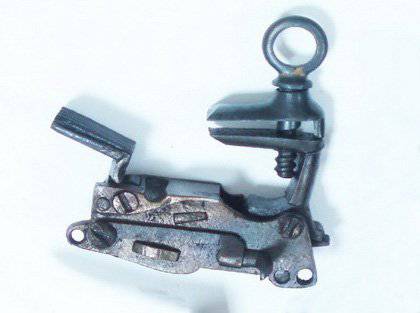 The upper sponge of the trigger is pressed against the lower trigger screw, which has a ring in the upper part. The screw thread has a large pitch and resembles the thread of screws intended for fastening not wood, but wood. The trigger provides for the possibility of placing weapons on a safety and combat platoon. 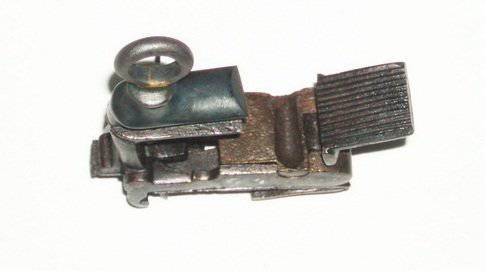 The amplitude when the trigger for combat platoon is approximately 18 mm, the force of the trigger platoon about 10 kilogram. Flint of the castle has a vertical grooved grooves, probably intended to direct the carved sparks on the shelf. 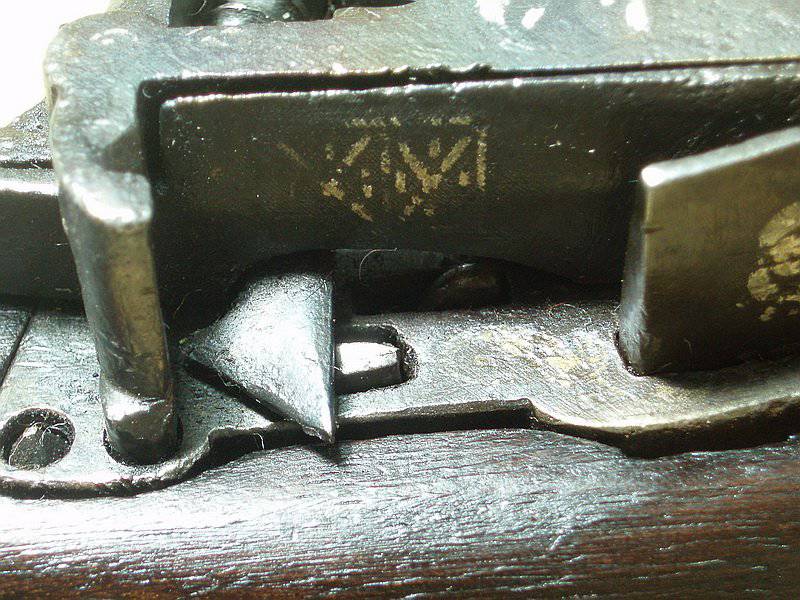 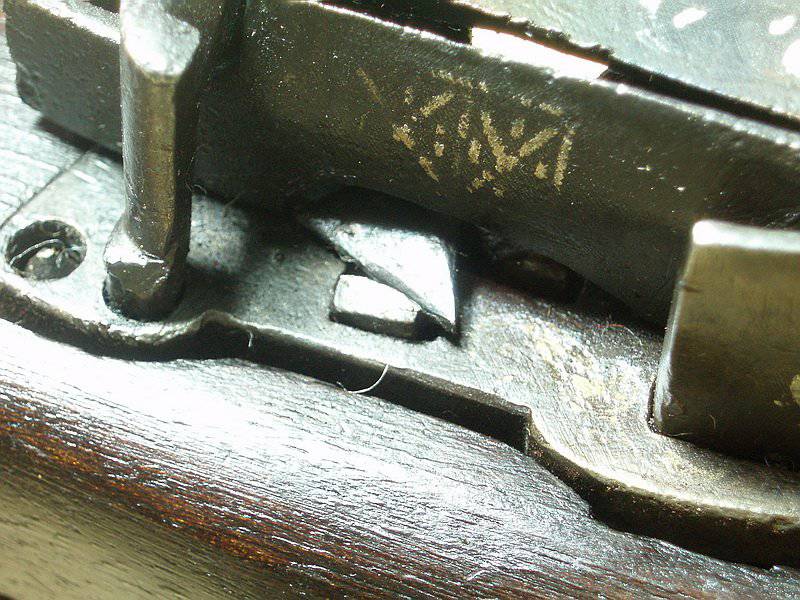 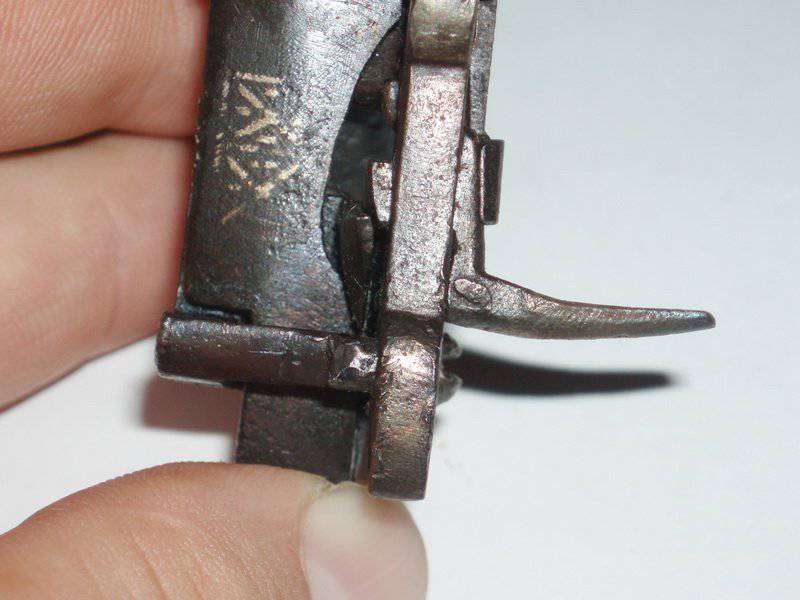 The photo from the bottom side of the lock successfully illustrates the work of the mechanism of the micheleta during the descent of the trigger. When you press the release button, its pivot (button plate) acts on the protruding end of the trigger lever. 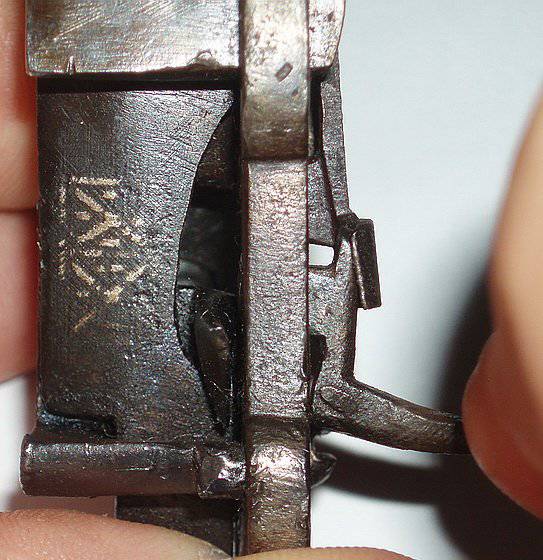 The trigger lever rotates on its axis and pushes the spring to the side. In this case, the protrusion of the trigger heel is released from engagement with a combat platoon. In addition, at the same time, the ledge of the safety platoon moves to the side, thanks to which the trigger rotates freely on its axis. The trigger with the flint sandwiched in its lips strikes the flint. The flint due to the impact of the hammer turns on its axis, opening the shelf with the seeding powder. Under the influence of sparks, carved with flint from the surface of flint, the powder on the shelf lights up and, through the seed hole, ignites the main powder charge in the bore of the weapon. Shot occurs.

Ctrl Enter
Noticed oshЫbku Highlight text and press. Ctrl + Enter
We are
Russian flint cavalry gun of the lower ranks of the sample 1839 of the yearSharps pistols variants
Military Reviewin Yandex News
Military Reviewin Google News
4 comments
Information
Dear reader, to leave comments on the publication, you must sign in.