The last anti-mine ships of the Soviet Union

January 10 2014
9
The appearance of seemingly at first universal means of fighting mines ahead of the ship’s course required the creation of very expensive anti-mine ships of the new class — minesweepers-seekers of mines and their latest anti-mine weapons, which are based on reusable self-propelled submersible vehicles. In addition, this led to the creation and introduction of special channels into the bottom mines, causing mines to be blown up from the physical fields of the underwater vehicle and to destroy them, which is economically beneficial, given the higher cost of the PA compared to the bottom mine and the incomparable numerical ratio of the bottom mines and the PA .


In addition, by the beginning of the 1980-s, the combat capabilities of the mine weaponsincluding setting depth, multi-channel and multiple fuses, difficulty in detecting (dielectric materials of buildings, siltation, etc.), secrecy of setting (submarines, aviation) Especially dangerous in this regard was the anchor mine adopted by the United States in 1976. Mk-60 Captor with a depth setting 500 - 1000 m, representing a serious danger to submarines. 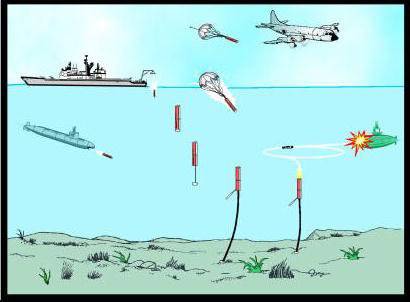 Therefore, at the end of 1970-x - the beginning of 1980-ies, there was an urgent need to create mine-trawling ships of the new generation with the most extensive use of automation and remote control, with improved habitability conditions and increased sailing safety. More attention has been paid to environmental issues.

The first studies on the creation of a new sea minesweeper were conducted in the 1970s. Ship design project 12660 "Ruby" It began with the Western PKB (chief designers N.P. Pegov and V.S. Sergeev) from 1972, then one of the options was to install a helicopter-mine sweeper on the ship. However, even without this, the ship’s displacement increased to 1150 t, and the power plant remained the same for the 266 project. At the same time, the powerplant of the small stroke and the bow thruster are additionally installed.

The deep-sea hydroacoustic towed seeker-destroyer of the halibut bottom mines began to be developed at the Central Research Institute Gidropribor in 1976. In comparison with the “Beam-1” searcher in the new product, the detected objects should not only be indicated by markers, but, if necessary, be destroyed immediately during the towing process. GUS for the seeker created in the Central Research Institute "Morphyspribor". Soon work on the entire system of "Halibut" passed the Ural branch of the Central Research Institute "Gidropribor" (Ch. H.H.Davletgildeev designers and V.I.Gul), created on the basis of SKB engineering plant them. Voroshilov. The seeker-killer passed the tests and in 1985 was adopted by the Navy, but due to deficiencies in the sonar system, it was not put into mass production.

The development of the new GASM “Kabarga”, the modifications of which were installed on the naval mine-sweepers and naval minesweepers, was completed in 1990 of the Scientific Research Institute “Breeze”. However, the level of secondary armament Mine with information processing and interaction is virtually identical to the preceding stations models.

At the same time, after the appearance in the USSR Navy of effective naval mining stations of the “Musk deer” type in the 1980s. work continues on the creation of self-propelled mine-seekers-destroyers. In 1989 was adopted fleet second-generation self-propelled tele-search finder-destroyer STIU-2 “Ketmen”, which works on target designation of a ship’s hydroacoustic mine detection station at depths of up to 100 m. It was developed by the Ural branch of the Central Research Institute “Gidropribor” (chief designer A. A. Kazin).

STIU-2 provides a search with a speed of movement to 3 nodes and the destruction of the bottom and anchor mines ahead of the course of the ship-minesweeper. A charge was placed on the detected mine (there are two of them on the apparatus with an explosive charge of 130 kg), and after the STIU was withdrawn to a safe distance, the mine was detonated. 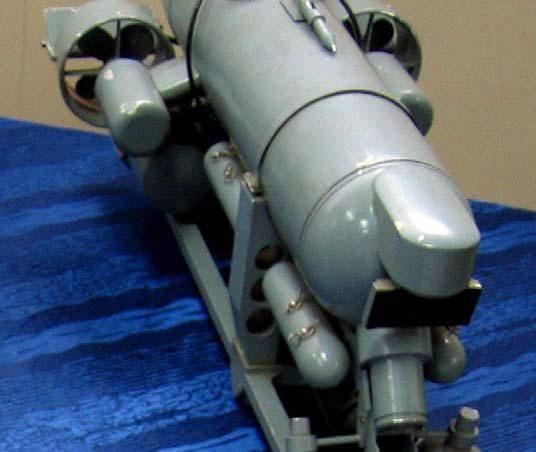 The construction of ships of the 12660 project was carried out at the Sredne-Nevsky Plant since 1983. The ships were built of low-magnetic steel to combat the deep-sea anti-submarine mines of the type "Keptor" and for the mine protection of ships and transports in remote sea areas. The lead minesweeper Zheleznyakov was built at the Sredne-Nevsky Plant in 1988. The dimensions of the ship required, when taking out from the berth in the workshop, to increase the opening of the shop gates, and the descent device maintained the maximum loads at the moment of descent. Were late deliveries of new equipment, which complicated and delayed the timing of the installation work.

Entered into service two ships "Zheleznyakov" and "V.Gumanenko" far superior 266M project ships on the effectiveness of mine action several times. Construction of the hull of the third ship due to lack of funding was discontinued.

Creating 12660 ships of the project - a whole era in the Soviet shipbuilding. They were the first naval trawlers of the Soviet Navy, capable of conducting mine action ahead of the course and fighting modern deep-sea mines. The experience gained during their creation and use, is invaluable in the further design of ships anti-mine defense.

According to the shipbuilding program MTSCH project 12660 (known in NATO as Gorya) Planned to build more than succeeded. Already in the process of testing, it became clear that the project was very complex and the ship was large. And besides, the Soviet Union collapsed, came other times and funding defense direction has fallen sharply. Therefore, it was decided to build new marine minesweepers in the hull of the well-proven MNS project 266M, but with new means of searching and destroying mines, which should not be as expensive as the Rubin 12660 project.

Modern approaches to mine action

In recent decades, the creation of minesweepers-seekers has become a significant technological breakthrough. Only the leading maritime powers and countries with a high level of industrial development were able to implement it, mainly due to the implementation of the principle of interstate cooperation.

The modern concept of mine action, known as "Minami hunt"It is based on the active use of hydroacoustic armament of mineships to search for, detect, and survey all stationary underwater mine-like objects found in given boundaries of water areas.

According to a survey minopodobnye items referenced to the mines, must be applied to the electronic card (listed in the database) and destroyed, and information about other objects (sunken ships, industrial waste, large stones, noticeable folds bottom, etc.) must be also entered into the data bank to identify acoustic contacts during subsequent search actions in these areas.

The core of the anti-mine armament of modern ships of this direction is the sonar mine detection stations, anti-mine remote-controlled vehicles and automated mine action control systems.

As is known, the leading position in the construction of modern minesweepers - mine seekers and the creation of the main components of their anti-mine weapons are occupied by firms in the UK, France, Italy, Germany, the Netherlands and the USA. In recent years, they have also been joined by firms from Japan, Sweden, Norway, and South Korea, who are building mine-sweepers-seekers with mine weapons, supplied in whole or in part by the firms of the above-mentioned countries. Most states are not able to build such ships and forced to buy them from exporting countries.

In an effort to keep up with the leading maritime nations, in 1990-ies of the defense industry enterprises of Russia prepared proposals for the modernization of the mine countermeasures ships, whereas for export to the Russian trawlers type 10750E and 266ME proposed to establish podkilnye plant a mine-detector MG-89M, MG-991, MG -992М and МГ-993М, self-propelled remote-controlled underwater vehicles for additional search and destruction of mines (ROV) "Ropan-PM", "Route".

In promotional materials West PCB noted that meet modern requirements facilitates installation on 266ME project ship and the use of sonar mine-detector (Propelled variable depth sonar - PVDS) with priemoizluchayuschey system placed on a self-propelled remote-controlled underwater vehicle (Remotely operated vehicle - ROV), which provides detection , identification and classification of mines far ahead of the ship. The range of the GASM in this case is not limited to either the disturbance generated by the ship or the hydrological conditions of the sea. Destruction min after detection apparatus can be carried out in the same family having a function shredder min.

As specialists of the Central Research Institute Gidropribor noted at one time, the creation and development of means of search and destruction of mines will be a priority in the development of mine action weapons. New trends in this direction are seen in the creation of self-propelled mine-detector sonar with variable depth of immersion of receiving and transmitting antennae, mine disposable projectiles - destroyers towed minopoiskovyh stations as part of unmanned vehicles.

In addition, the use of seemingly traditional anti-mine agents with the greatest efficiency requires the use of modern technologies. The latter was clearly noticeable when visiting St. Petersburg with a permanent mine-transport unit of the regional command of the naval forces of NATO “North” at the end of 2004. Practically every ship had perfect means of space communications and navigation.

In addition, all the ships in the group of minesweepers-seekers were equipped with special devices for remote search for mines. For example, a Belgian trawler M915 Aster (595 displacement tons, length m 51,5, 46 person crew) had two self-propelled remote-controlled underwater vehicles to search for mines PAP 104 (operating depth up to 200 m) mine-detector sonar station, other necessary equipment and facilities. He, like the Dutch M857 Makkum, was created by project "Tripartin" joint French-Belgian-Dutch development. 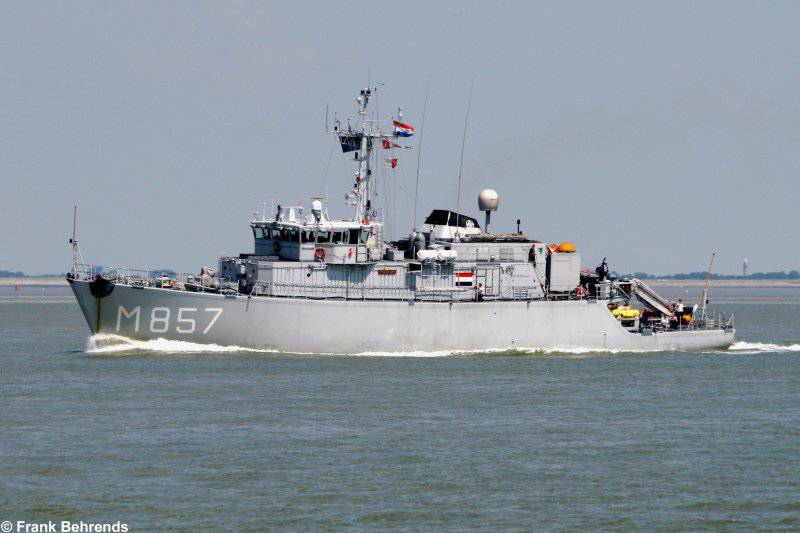 Even the oldest of the men on the Neva River ships - Polish trawler Czajka (side number 624, displacement 507 tons, length 58,2 m, crew 49 people) class Krogulec (type 206FM), built in 1967, in Gdynia, in spite of his advanced age appropriate standards NATO, it had two small-sized underwater vehicles to search for Polish mines. 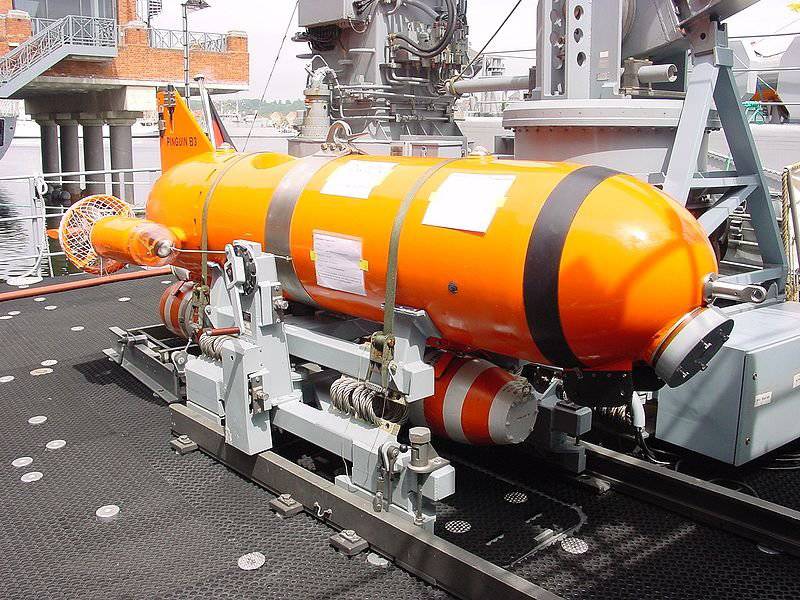 German Pinguin B3 Mine Search Engine. Under the case of fixed explosive charges.