In India, in recent years, self-propelled artillery mounts have been actively developed on the basis of the main battle tanks in service. Mainly used machines of domestic production - Arjun and T-72. Indian specialists first tried to install turrets with 72-millimeter artillery systems from the British AS155D self-propelled howitzer AS90D, South African T-6 and Zuzana Zuzana on the chassis of the T-6 tank, however, they ended unsuccessfully, because the requirements for the mobility of the SAU in the conditions of the conditions were not satisfactory. areas along the Indo-Pakistan border. The development of a new howitzer commissioned the South African company Denel, which had experience in the development and production of artillery systems. The most successful option was the installation of the T-155 turret on the Arjun tank chassis, developed by the South African company Denel, in which a long-barreled 52-mm howitzer (caliber 7,62 barrel) and an XNUMX-mm machine gun were installed. 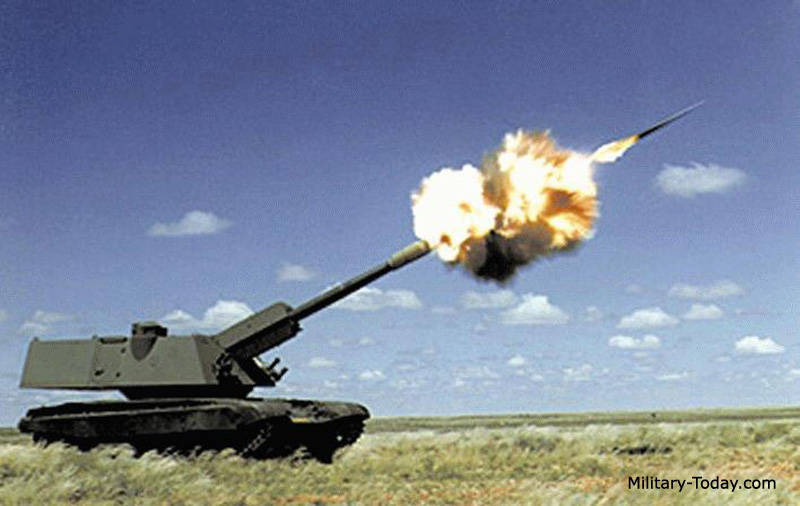 The work was carried out in the city of Avadi in the main research machine-building center in conjunction with the "Defense Research Organization." The self-propelled howitzer was given the name Bhim (warrior god in the Indian pantheon).

As a base for self-propelled artillery installation Bhim used Arjun tank chassis with a classic layout. In front of the tank control department is located, behind it is the fighting compartment, in the stern is the engine compartment.

The nose part of the body has a combined armor with a large angle of inclination of the frontal upper part. The sides of the hull are protected by anti-cumulative screens, their front part is made of armor material, the rest of the sides are covered with rubber screens. Probably, in Bhim ACS a high-speed fire extinguishing system and protection against weapons mass destruction. The hull has a welded design with the use of armor "khan", created in India. Armor is one of the chobham armor variants used in Western tanks.

The self-propelled unit Bhim preserved the power plant of the tank - a V-shaped ten-cylinder diesel 838 KA 501 of the company “MTU” with liquid cooling and a turbo-supercharging system. At 2500 rpm, the engine develops power in 1400 hp.

Hydromechanical transmission is connected to the engine, which includes a planetary gearbox of the German company Renk and a torque converter. The manual transmission has 4 forward gears and 2 reverse gears. Suspension - hydropneumatic. Each side of the chassis has 7 supporting and 4 supporting rollers. Rear wheels - leading. Dual track rollers with external shock absorption. The caterpillar is made of steel, equipped with rubber-metal hinges, on the tracks - rubber linings. 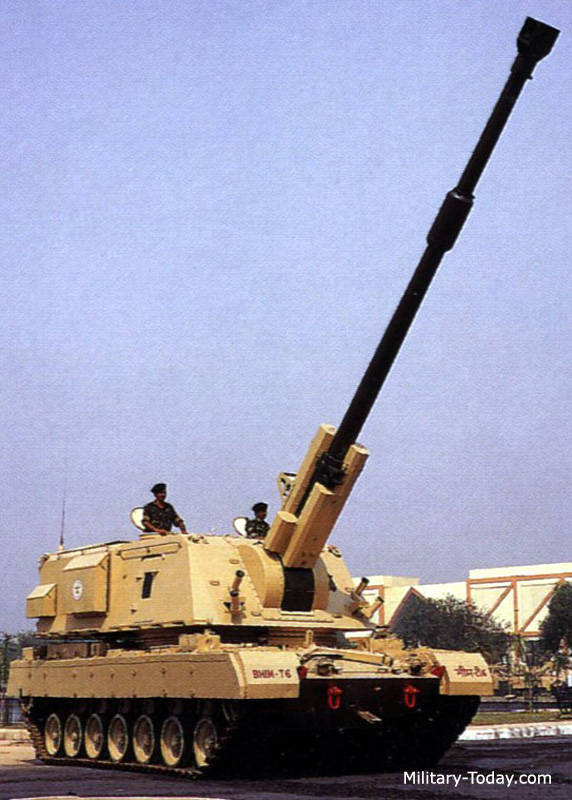 The T-6 welded turret of circular rotation was made of steel armor plates, providing protection from shrapnel of artillery shells and 7,62-mm armor-piercing bullets. Equipped with a gun with a barrel length 45-52 caliber, ejector and muzzle brake. Ammunition consists of separate loading 40 shots, which are placed in the aft niche in drum sets. There is a mechanism for loading and loading from the ground or transport. Elevation angles from –5 to + 70 degrees. The auxiliary power unit ensures firing in the event of the main engine shutdown. For the production of smoke screens on the frontal armor sheet is placed two four-barreled grenade launcher. Access to the calculation of the tower through the commander's hatch in the roof and doors in the sides.

The prototype 155-millimeter self-propelled howitzer Bhim is equipped with a fully automated positioning system and an autonomous navigation system, which is based on a ring laser gyroscope. The crew of the artillery system Bhim consists of four people, but the high level of automation makes it possible to reduce it to two people, with work in automatic mode.

The Bhim howitzer is distinguished by its rapid deployment to a combat position; from a march, a self-propelled artillery unit can open fire 30 seconds after a stop. This feature makes the howitzer the perfect tool for a shoot-and-run strategy. 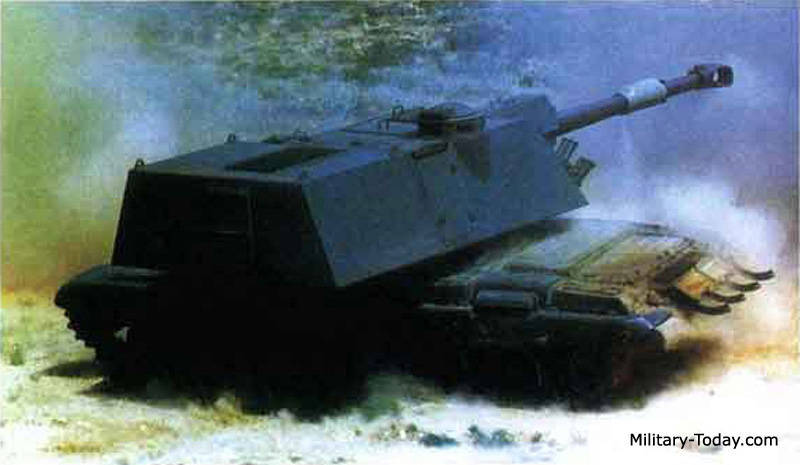 The maximum firing range when using ERFB-BB projectiles exceeded 40 kilometers, with a high accuracy of hitting the target. When using a special missile Denel V-LAP rocket range was 52 km. This system can shoot any standard NATO ammunition caliber 155 millimeters. Standard firing mode - 2 shot per minute. Maximum rate of fire - 8 shots per minute. The Bhim howitzer with six volleys of various trajectories is capable of covering the territory of 25 square. km

In 1998, fire tests of the prototype were started at the site in Pogran, after which sea trials were conducted in the Thar desert. It was planned that if the Bhim howitzer was adopted by the Indian army, T-6 towers would be purchased in South Africa in an amount that would be enough to equip several regiments with self-propelled guns, after which a license to manufacture the towers would be acquired. However, in 2005, Denel was accused of paying bribes. This was the main reason for the freezing of further work on Bhim.