Question of the day: will the Black Sea Fleet be upgraded? 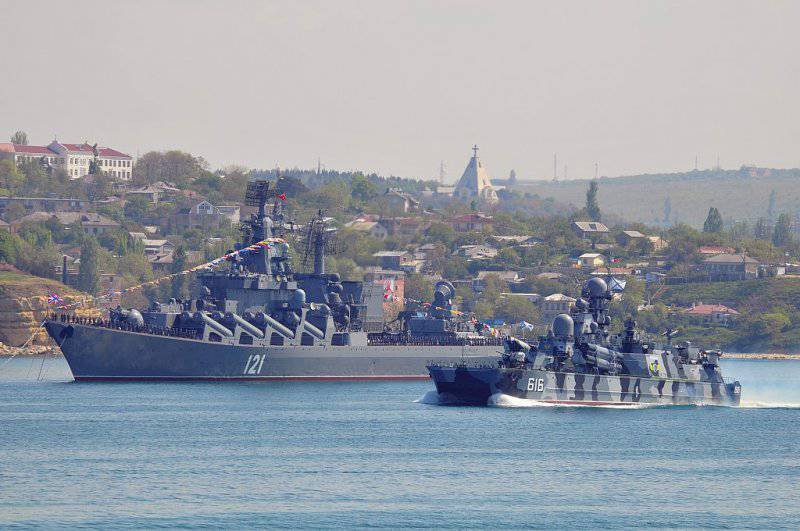 The Russian Black Sea fleet has been on guard over the country's frontiers for more than 200 years. The main base of the Soviet and Russian ships on the Black Sea was Sevastopol, while the rest of the Black Sea ports played a supporting role.

Recall that the capture of Sevastopol by the Germans in 1942 year sharply worsened the position of the Soviet troops in the Crimea. The Germans began to dominate here, despite the fact that they had insignificant naval forces: a few landing barges and small universal ships (used as transports and cargo carriers), small submarines and boats.

After the collapse of the Soviet Union between Ukraine and Russia in 1997, an agreement was signed on the conditions for the Black Sea Fleet to stay on Crimean territory. Duration of the Black Sea fleet in Ukraine was installed - until May 28, 2017. Time has passed.

A situation has arisen when there are a dozen objects belonging to the Russian Federation in the territory of Sevastopol: berths, administrative buildings, warehouses, lighthouses, etc. and they are located on the territory of sovereign Ukraine. Infrastructure objects of the Black Sea Fleet of the Russian Federation scattered throughout the Crimean territory allow the Ukrainian authorities to paralyze their work at any time. For example, during the presidency of Yushchenko, local authorities violated the work of the Black Sea Fleet administration under the pretext of repairing streets or imposing bans on the movement of armed Russian subdivisions in Ukraine.

Also in Sevastopol, Western Ukrainian ultranationalists have repeatedly appeared, who are seeking to block the work of objects of the Russian Black Sea Fleet. By the way, these “raids by zapadentsevs” occur during the presidency of V. Yanukovich. For example, in August 2011, members of the Student Fraternity organization held a civil action, the purpose of which was to transfer all the Crimean lighthouses to Ukraine. It got to the point that activists of the nationalist organization penetrated into the territory of the Russian lighthouse "Sarych" and hung out signs about the belonging of this lighthouse to Ukraine. The Ukrainian authorities do not support such actions, but do not hinder their implementation.

Also, if the authorities wish, it is very easy to block the exit of Russian ships through the narrow passage of the Sevastopol Bay. So, at the entrance to the Quarantine Bay, where the point of deployment of Russian missile boats is located, the Ukrainian authorities allowed the deployment of private yachts, and they can at any time prevent Russian naval equipment from entering the sea.

After the division of the Black Sea Fleet between the two states, Russia was left without a coastline defense, since all coastal batteries, mobile and stationary missile systems had moved to Ukraine. Only the 30-I tower battery was transferred to the Russian side, which was already designed as a museum of military glory - that is, was at the time of transmission is not a fighting unit.

From the previously powerful air defense system of the Crimea, the Russian side moved only one anti-aircraft missile regiment (1096), which has been on the 66 peninsula for years. In service with the regiment 18 launchers "Osa". And although, for the moment, the regiment is active - it is partially reduced. To maintain the regiment’s combat readiness, retrofitting is urgently needed because the old equipment is not able to perform the assigned tasks, and therefore the armament must be replaced with newer models of military equipment.

Everyone is aware of the ongoing conflict between Ukraine and the Russian Federation related to the supply of gas. And the Russian Black Sea fleet has become a bargaining chip in this dispute. At the time of the intensification of the confrontation, Kiev presented demands for an inventory of the facilities of the Black Sea fleet located in Ukraine. It came even to the forceful seizure of lighthouses belonging to Russia.

It should be noted that not only the Russian, but also the Ukrainian side are well aware that without the new ships and modern equipment, the Black Sea Fleet will cease to exist as an operational-strategic alliance of the Russian armed forces.

At present, there are agreements that prohibit the Russian side from replacing old Black Sea Fleet ships with new ones and even modernizing them, as well as equipping combat units with new modern weapons systems. As a result of these agreements with 1991, the Russian Black Sea Fleet does not receive new weapons. For example, the Russian BOD "Smetlivy", stationed in the Crimea, for years 17 has been frightening the enemy with empty containers for missiles. A missile cruiser "Moscow" was able to conduct training firing only twice - in the 2002 and 2006 years in the Indian and Atlantic oceans. But in the waters of the Black Sea to the Russian cruiser, the Ukrainian authorities have banned any firing of anti-aircraft missiles and anti-ship missiles. Another flagship of the Russian Black Sea Fleet, the anti-submarine ship Kerch, is in excellent condition, but the crew is staffed by less than 10% - instead of 425 people, there are 40 on the ship. According to the standards, BPC Kerch has an 35 daily readiness for going to sea and, of course, it is impossible to form a full-fledged crew in such a period. Another Russian BOD, Ochakov, which experienced seventeen-year repairs at the Sevastopol Marine Plant, was withdrawn from the Black Sea Fleet as a combat unit in 2011 and is currently being prepared for scrapping. And now no one can tell where the significant funds allocated for the repair of the ship from 1991 to 2008 were spent.

With the 247-m division of submarines of the Black Sea Fleet of the Russian Federation, based in Sevastopol, absolutely unbelievable things happen - there are control bodies of the division, but there are no submarines. Thus, the submarine B-871 built in 1990 of the year registered in the division, after participating in 2011 in the international rescue operation, stood for more than a year on scheduled repairs in Kronstadt, which led to a failure in the crew’s combat training that saw native Crimean shores only in the autumn of 2012 of the year. The second submarine is locked in a rotten float from time to time and no one knows how to extract it from there. Excursions organized by Sevastopol travel agencies to the South Bay look like a mockery, where the PSZ-50 charging station, which used to be the C-49 submarine, is shown to inquisitive tourists. And although outwardly it looks decent, but the former combat unit of the Russian Black Sea Fleet cannot fulfill its main function. Before 1991, the Black Sea fleet had 40 submarines, now one. But the main enemy - the Turkish Navy, the number of submarines during this time increased to 16.

The Soviet Navy was proud of its floating hospitals, which were equipped with modern equipment and staffed by professional staff. On board they could do the most complex operations. The hospital ship Yenisei has been standing in the South Bay of Sevastopol for a long time - the equipment has been taken away, the hotel functions informally on the ship.

Surprisingly, today, the most reliable support and protection of the Russian Black Sea sites in the territory of Sevastopol is the pro-Russian population of the city. It was they who defended the Black Sea Fleet from the landings of the “zapadentsev” and the aggressive actions of the Ukrainian authorities. For example, in the 2008 year, when the city authorities attempted to install a memorial plaque in honor of the anniversary of the creation of the Ukrainian fleet, the outraged people of Sevastopol disrupted the installation of the board, took it to the center of the bay and flooded it. Neither the numerous police officers nor the Marines of the Naval forces of Ukraine could prevent them.

Moscow understands that under any authority in Ukraine, the Ukrainization of Sevastopol will continue, with the simultaneous squeezing of the Russian Black Sea Fleet. However, the matter is not even in this aggressive behavior of Kiev - after all, everyone understands that time is lost, and without modern ships and new weapons, the Russian Black Sea fleet will become operetta.