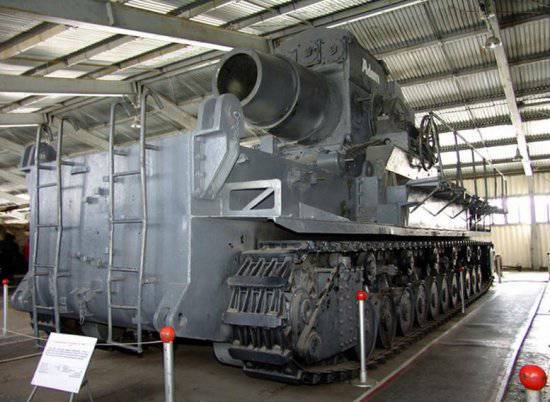 “Karl” (German factory index “Gerät 040” - “040 installation”) is a heavy German self-propelled mortar that took part in the Second World War. This mortar was intended for the assault of fortresses or strongly fortified defense of the enemy. A bright representative of the most powerful self-propelled artillery of its period.

History Karla was launched in the 35 of the last century. At that time, the company Rheinmetall-Borzig was developing a rifled mortar under the caliber 600 mm. This mortar was capable of firing projectiles with a mass up to 4 t. At a distance of over a kilometer. She received her name from the general from artillery Karl Becker, who led the design and construction of the ACS.
Through the 2 of the year since the start of the design of the mortar, namely in the 1937, a prototype of the gun was manufactured. Mortar had a rather impressive appearance, weighed over 55 tons, threw shells weighing about 2 tons at a distance of 3 kilometers. 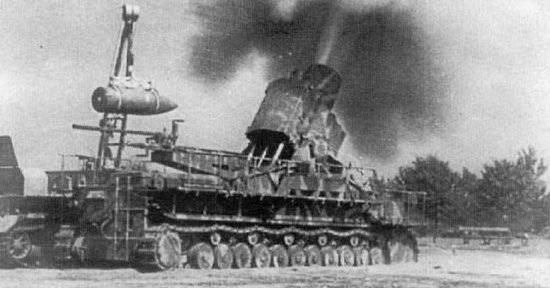 But at the same time, there was one important shortcoming of such an impressive tool. It was his bulkiness. In this regard, in the same year 1937, work began on creating a self-propelled gun carriage for the mortar. After installing the mortar on the carriage, the total artillery mass was 97 tons. But it was not the final modernization of "Karl". Constructors on the instructions of the Wehrmacht carriage was covered with armor, in addition, the gun was modernized and its length was 5108 mm. In this form, the mass of the self-propelled mortar was 126 tons. A prototype mortar on an eight-tracked crawler in May 1940, was successfully tested. And in November 1940, the production of a small lot of mortars began. Production was completed in August 1941.

The first art installation "Adam" was transferred to the military in November 40-th year. In April, the 41 of the German army received another 3 mortar "One", "Thor" and "Eve". The remaining 2 mortars - “Ziu” and “Loki” - were transferred to the army at the end of August 41.

Some evidence points to the existence of the seventh installation, which was called “Fenrir” (“Fenrir”). As far as is known, this mortar did not take part in hostilities and was used as a testing ground. It is possible that the prototype built in May of 1940 was named by this name.