December 13 2013
9
To date, one of the most effective means of defense of the operational-tactical and tactical level remain the Russian air defense systems of the near and medium range. We are talking about the air defense systems "Tunguska-M1" (rocket-artillery) and "Buk-M2" and its export version "Buk-M2" (rocket). These complexes are still significantly superior to their foreign counterparts in tactical and technical characteristics, as well as in terms of cost / effectiveness. The following discussion focuses on the Buk-M2E medium-range complex.


The development of this air defense system was fully completed already in 1988, however, due to the collapse of the USSR and the difficult economic situation in the country, its mass production was not deployed. After 15 years all the project documentation for this complex has been refined to a modern element base. Since 2008, the complex is in service with the Russian army and is being supplied to the troops. The export version of the Buk-M2 complex was shipped to Venezuela, Syria and Azerbaijan. At the same time, Syria acted as the launch customer for this complex, the contract was concluded in 2007 and is estimated at 1 billion dollars. All complexes under this contract have already been delivered.

The Buk-M2E medium-range air defense system refers to 3-generation systems (according to the SA-17 “Grizzly” NATO codification). Due to the use of modern phased antenna arrays in this model, the number of simultaneously accompanied air targets increased to 24. The introduction of the radar illumination and guidance with an antenna post, which can be raised to an altitude of 21 m, into the air defense complex provided an increase in the effectiveness of the complex in the fight against low-flying targets. 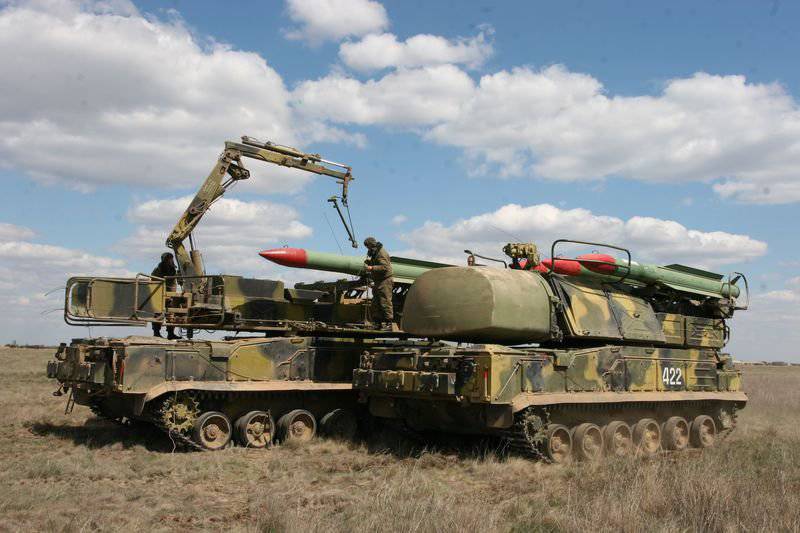 The leading manufacturer of this anti-aircraft missile system is Ulyanovsk Mechanical Plant OJSC. The lead developer of design documentation for the main combat equipment and the Buk-M2E complex as a whole is OAO Tikhomirov Instrument Engineering Institute (Zhukovsky). The development of design documentation for the SOC - the target detection station 9C18М1-3E - was carried out by OAO NIIIP (Novosibirsk).

The Buk-M2E complex is a modern multi-purpose medium-range air defense system that is highly mobile. This anti-aircraft missile system is able to provide a successful solution to combat missions in any situation, even in the face of active radio opposition from the enemy. In addition to various aerodynamic targets, air defense systems are able to deal with an extensive number of missiles: cruise missiles, tactical ballistic missiles, anti-radar missiles, special aviation air-to-surface missiles. It can also be used to destroy marine surface targets of a class missile boat or destroyer. Also, the complex is able to provide firing of ground-based radio contrast targets.

Automated control of combat operations of the Buk-М2Е complex is carried out with the help of a command post (CP), which receives the necessary information about the air situation from a target detection station (SOC) or a higher command post (CPSU). KP is engaged in the transfer of control commands and targeting to 6 batteries using technical communication lines. Each battery of the complex consists of an 1 th self-propelled fire installation (SOW) with 4 rockets and an 1 start-up installation (ROM) attached to it, and the 1 radar of illumination and guidance (RPN) can also be part of the battery. 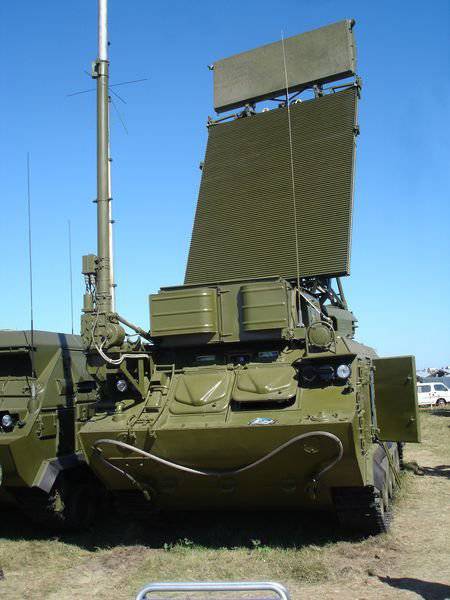 
The shelling followed by a complex of air targets is carried out using both single and salvo launches of missiles. In the Buk-М2E SAM system, highly effective anti-aircraft missiles with a solid-propellant rocket engine are used, which are flexibly adapted to various types of targets with military equipment. The use of these missiles allows you to confidently hit air targets in the entire range of the complex: from 3 to 45 km in range, from 0,015 to 25 km in height. At the same time, the missile defense system is able to provide flight altitude up to 30 km, and flight range up to 70 km.

The Buk-М2E SAMs use 9М317 SAMs. This rocket uses an inertial-corrected control system, which is supplemented by a nasal semi-active Doppler radar homing head 9E420. The warhead of the rocket is pivotal, its mass is 70 kg, the radius of the zone of destruction by shrapnel 17 is m. The maximum flight speed of the rocket is up to 1230 m / s, withstand overloads are up to 24g. The total mass of the 9М317 SAMs is 715 kg. The rocket uses a dual-mode RDTT. Its wingspan is 860 mm. The rocket has a high level of reliability. A fully equipped and assembled rocket does not require any adjustments and checks throughout its service life, which is 10 years.

The complex uses modern phased antenna arrays (HEADLIGHTS) with an effective command-and-control method, which allows SAMs to simultaneously accompany up to 24 various air targets that can be hit with a minimum time interval. The reaction time of the complex does not exceed 10 seconds, and the probability of hitting an aircraft that does not perform evasive maneuvers is 0,9-0,95. At the same time, the real effectiveness of all modern operational-tactical air defense complexes is largely determined by their capabilities to carry out effective work on missiles. Buk-M2 is able to effectively destroy such targets that have an effective reflected surface (ERP) up to 0,05 m2 with a probability of destruction at the level of 0,6-0,7. The maximum speed of the hit ballistic missiles is up to 1200 m / s. 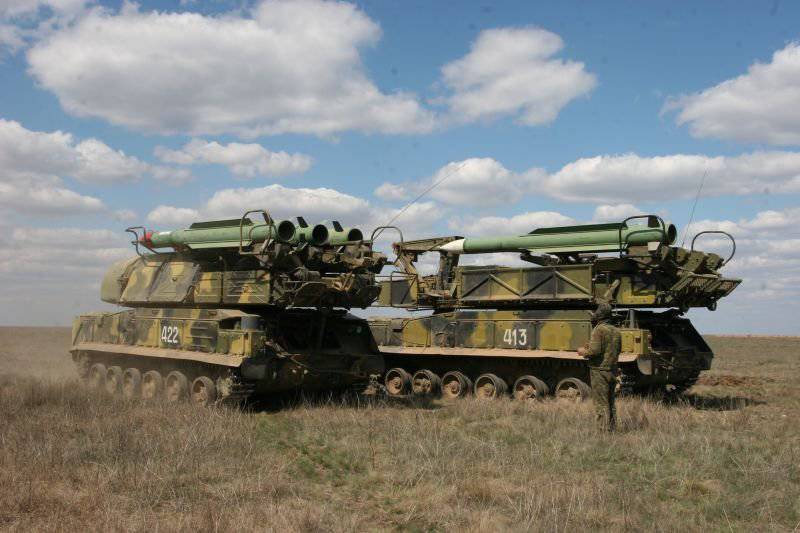 Destruction of enemy cruise missiles and other targets, for example, UAVs flying at low and extremely low altitudes in difficult-rugged and wooded areas, is provided by the air defense system due to the presence in it of a special radar of illumination and guidance (RPN), equipped with an antenna post, lifted to a height of 21 m.

In 2009 and in 2010, the complex underwent a real test in as close as possible to the combat conditions, with the implementation of extensive, multilateral shooting and flight tests, which were conducted at the sites of the Ministry of Defense of Russia, as well as foreign customers of the complex. The “Buk-М2E” air defense system is able to work in the most difficult weather and meteorological conditions.

Air temperature up to + 50 ° С, wind gusts up to 25-27 m / s, increased dustiness of the air is not a hindrance to it. The modern hardware and software implementation of the anti-jamming channels used in the complex allows the combat means of the complex to function confidently even in conditions of strong noise suppression with exposure to protective interference up to 1000 W / MHz. During the tests, firing was carried out both at single and at several targets simultaneously located in the zone of destruction of the complex. At the same time, targets of various classes and purposes were shelled. Tests have become a real test of the marginal capabilities of the Russian air defense system and confirmed its high combat potential and compliance with the tactical and technical characteristics that were laid down by the designers at the development stage. 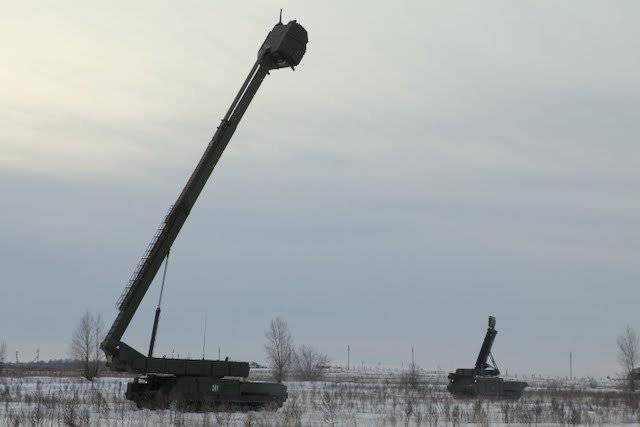 
The deployment of the Buk-М2E air defense system on high-speed self-propelled tracked chassis (wheeled can also be used) provides the ability to quickly collapse and deploy the complex, this standard fits into 5 minutes. To change the position with all the included equipment, the complex requires no more than 20 seconds, which indicates its high mobility. On the highway, the combat vehicles of the complex can move at speeds up to 65 km / h, on dirt roads - 45 km / h. The power reserve of the combat vehicles that make up the complex is 500 km.

At the same time, the Buk-М2E air defense missile system is an all-daily air defense system. The main combat facility of the complex, the SOU, operates on a daily basis through the use of an optical-electronic system, which is built on the basis of a CCD-matrix television and sub-matrix thermal imaging channels. The use of these channels can significantly increase the survivability and noise immunity of the complex.

The Buk-M2E air defense system is able to operate in a wide variety of climatic zones, at the request of the customer the machines are equipped with air conditioning. Combat vehicles of the complex without any restrictions (by distance and speed) can be transported by all modes of transport: rail, water, air.