December 12 2013
24
Currently, the police and counter-terrorism units of various countries of the world have in their arsenal a huge number of weapons of destruction, including such typical army weapons as assault rifles and machine guns. In this case, the specific requirements for the police arms, suggest the presence of unusual and specific solutions. In Russia, specialized 9-mm small-sized automata, for example, 9А-91, developed by engineers of the famous Tula Instrument Design Bureau, are quite popular in the MVD system. There is nothing strange in this, since the Tula gunsmiths tried to make the machine gun as cheap as possible in production and simple. It is also worth mentioning the two Klimov developments - the Vortex automatic machines SRH and SR3M.


These small-sized machines were designed for special 9х39mm cartridges SP5 and SP6, as well as their counterparts 7Н9 and 7Н12. The SP5 and SP6 cartridges are intended for use in “silent” rifle complexes and combine a small (subsonic) initial flight speed of heavy bullets with sufficient stability at a distance of up to 400 meters. At such a distance, these bullets have sufficient stopping and penetrating effects. In addition, these cartridges have a rather low recoil momentum, and the bullets themselves are less prone to various ricochets, which allows designing small-sized, compact weapons that are convenient to use in populated areas, as well as in fairly cramped rooms. The use of armor-piercing ammunition allows you to confidently hit opponents in body armor 3-class protection at a distance of up to 200 meters.

At the end of the 80 of the last century, the state security bodies of the USSR, along with the standard samples of small arms, to implement various power actions required new compact automata that would ensure the confident defeat of enemy personnel, including those dressed in body armor. At the very beginning of the 90-s in TsNIITOCHMASH in the suburban town of Klimovsk, designers A. D. Borisov and V. N. Levchenko presented a version of a shortened automaton created on the basis of a special silent automaton of the AS “Val”. The new development was unified with the AU in principal detail and was intended for the use of 9-mm cartridges SP-5 and SP-6. 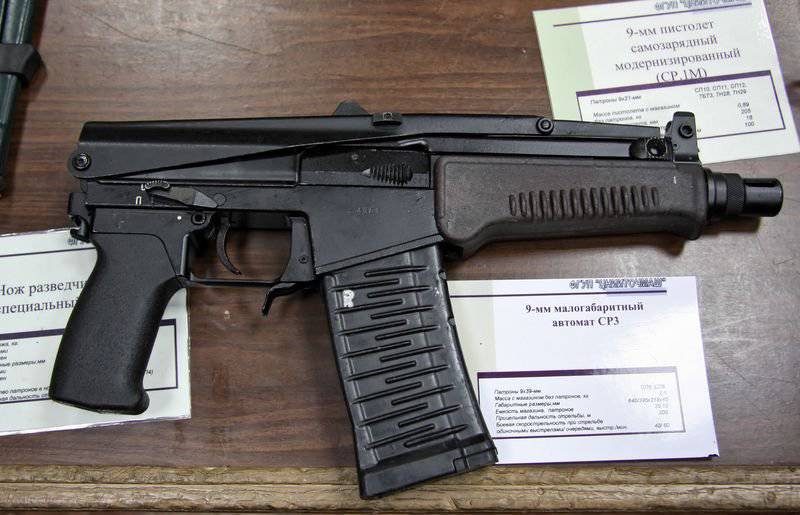 In the process of a rather long working out of new types of small arms, which received the symbol “small-sized automatic machine“ Whirlwind ”, the designers managed to create a reliable, easy-to-use and quite effective weapon for 1994. The machine gun designed in Klimovsk differed in very small sizes, which were comparable to machine pistols, but at the same time significantly exceeded them in firepower through the use of special 9x39mm SP-6 armor-piercing cartridges. The shape and small size of the machine made it possible to wear it covertly, it could be hidden under outerwear. The machine could safely be used in fairly limited spaces - basements, narrow corridors and aisles of buildings, in the cabin of vehicles, in underground passages.

After 1,5 years of trial operation in the FSB and other Russian law enforcement agencies, in 1996, a new small-sized machine gun, which received the CP3 Vortex index, was adopted by the Russian state security agencies. This type of weapon was mainly intended to be used as a weapon for secretive wearing of special forces by fighters who were engaged in the fight against organized crime, the protection of state activities, the fight against terrorism, and also as a potential self-defense weapon for military personnel.

However, after the adoption of the CP3 "Whirlwind" FSB handed over to TsNIITOCHMASH a new tactical and technical task, which suggested combining the best qualities of AS "Swirl" and SR3 "Whirlwind" and Air Force "Vintorez" in one small arms model. As a result, in Klimovsk they created a modification “Whirlwind”, which was designated CP3M. This small arms was the most unified with the BCC and AU and retained all the advantages of a compact machine. 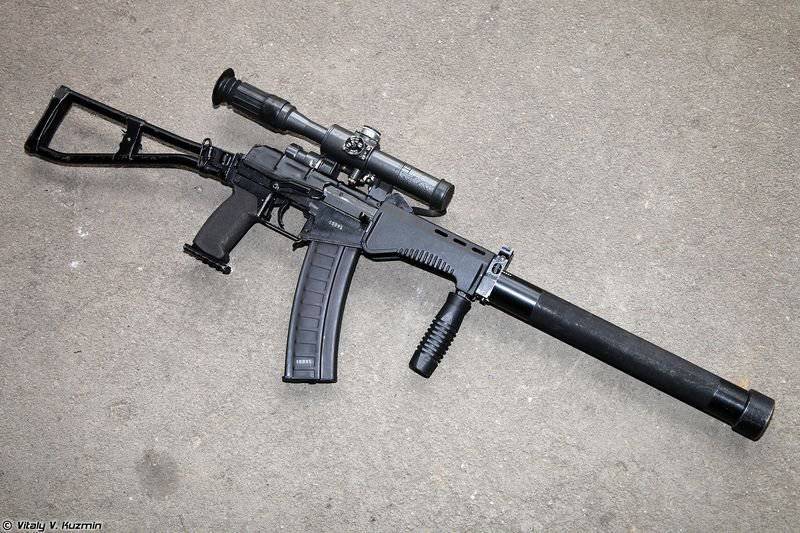 CP3M
The small-sized 9-mm modernized CP3М is designed to destroy manpower, including in body armor (2-3 protection class), as well as defeat unarmored enemy equipment at a distance of 400 meters. The mechanisms of the CP3M compact machine are built on the application of the energy of powder gases, which are discharged from the bore into the gas chamber. Unlocking and locking the shutter is done by turning it around its longitudinal axis. This process is carried out in the interaction of the leading protrusions of the shutter and copy grooves of the bolt carrier.

The machine uses a firing-trigger mechanism (USM), which allows the shooter to fire both single shots and bursts. On the machine there is a safety device that protects the weapon and the shooter from accidental shots when the machine strikes, drops it, accidentally pulls the trigger. Protection against the production of premature shots with the unlocked shutter is implemented by self-timer. The supply of cartridges is made from double row detachable box stores on 20 and 30 cartridges, cartridges in stores are arranged in a “checkerboard” order.

The sighting device of the machine consists of a two-stage transition pillar, which allows aiming at 100 and 200 meters, as well as an adjustable front sight. At the same time on the machine there is a seat for the installation of optical or night sights. The use of such sights provides a fairly accurate aiming of the weapon at a target at a distance of up to 400 meters in the daytime and 300 meters at night. 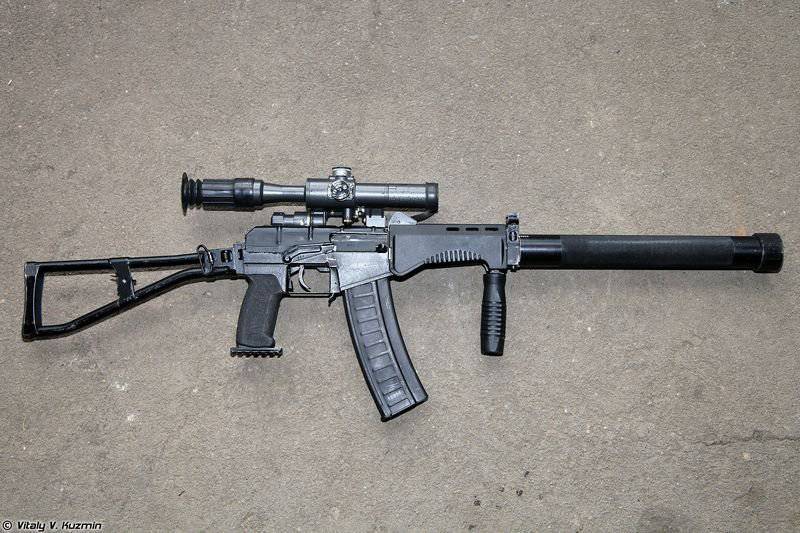 CP3M
The CP3M is equipped with a metal folding butt, which allows it to be reduced in size when carried. At the same time, the design of the machine provides for aiming firing with both folded and folded butt. The weapon can be equipped with a removable silencer, which, if necessary, is able to reduce the sound and flame of a shot. Also, the machine has a folding front handle.

At present, the small-sized 9-mm automatic machine CP3М is serially produced by FSUE TsNIITOCHMASH. Its main differences from the CP3 model are as follows: the fuse is located on the right side in the same way as an automatic speaker; the cocking handle is rigidly mounted on the right side of the slide frame; the metal butt has a skeletal structure and is folded sideways, similarly to an automatic speaker; In the forearm CP3M there is an additional folding handle for better retention of the weapon; on the muzzle of the barrel there is a special coupling on which you can install a quick-release muffler; on the left side of the receiver there is a seat for mounting the bracket with night and telescopic sight. In addition, the CP3M can use 20-charging shops from the AU and CP3 machines, as well as a specially designed 30-charging shop for it.